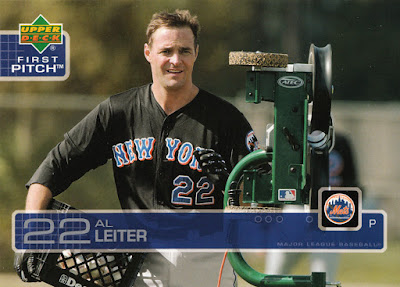 If there ever was a card perfectly representative of a particular blogger, today's header card is a most appropriate one for Dime Boxes chief Nick P.

Nick recently floated me a mailer full of great cards, including selections for my Mets collection; a bunch of Vladimir Guerreros; and even some Oleruds and A-Rods.  It was a perfectly grand assortment of cards from a guy who truly embodies all the great things our hobby should be about.

So, yeah, a fun and quirky card like the 2003 Upper Deck First Pitch Al Leiter above is the only appropriate way to kick off a Nick trade post.

Here are some of the other fantastic Mets cards from the mailer that are new to my collection... 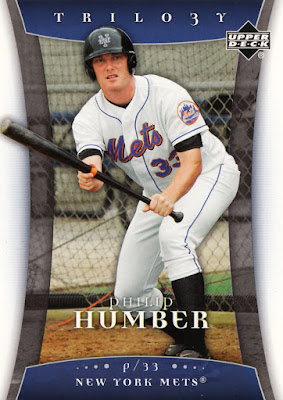 This is a total "Nick card" as well.  Pitchers at the plate is one thing, but how about pitchers in the cage practicing their bunting? 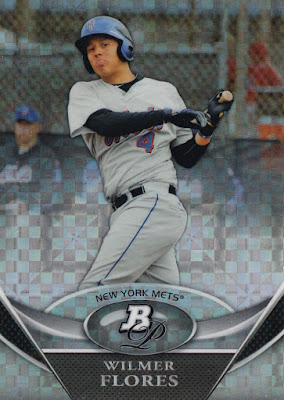 Already having the deed to the purple refractor parallel of this card, I'm now the proud owner of its x-fractor cousin.  I guess one of these days I oughta track down the plain old base version. 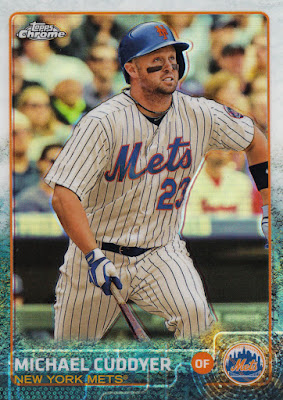 Initially I chalked this one up as a duplicate since I already have Cuddyer's 2015 Topps Chrome issue.  But, upon further inspection, this is a refractor.  It wasn't listed as such on the back, and in the past usually the tag "Refractor" is listed near the card number.  Maybe Topps stopped doing that years ago and I just haven't noticed?  Who knows. 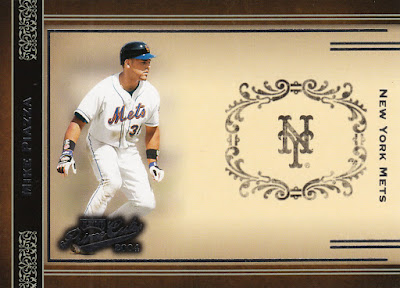 Here's a fancy serial numbered (/949) card from 2004 Prime Cuts.  This is an example of a design that begs for a signature or a jersey swatch.  That said, it's still a nice looking card of the soon-to-be Cooperstown resident. 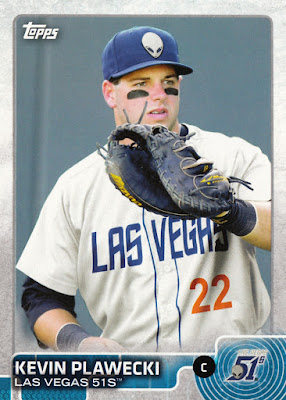 From the caps to the font used on the jersey tops, the Las Vegas 51s have one of the campiest and most fun uniforms in all of baseball.  This is my first representative from last year's Topps Debut set.  A very sharp card, by the way. 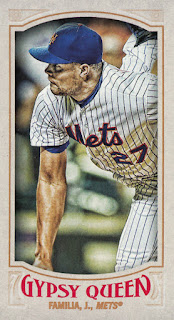 Twice this year, Jeurys Familia (pictured in GQ mini form) has escaped a bases loaded, nobody out jam to nail down a save.  Each time he created his own trouble before wriggling out of it.  Most miraculous, though, is that both instances were against the Cubs. 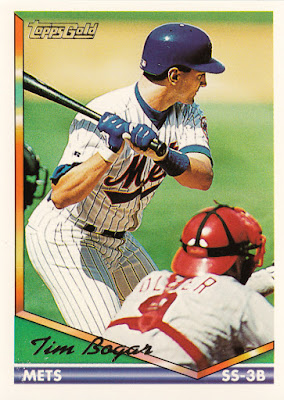 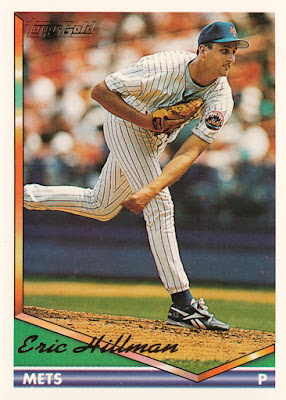 I'm gonna vow to be more serious about Topps Gold parallels from the first three years of the gimmick.  I've got so many base needs to fulfill from so many years, I tend not to focus on the variations as much.  But, I just think it would be really cool to have the gold team sets from 1992-94. 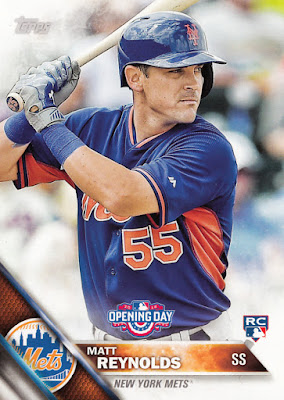 Thanks to this Matt Reynolds card, I've now managed to accumulate the team set from this year's Opening Day. 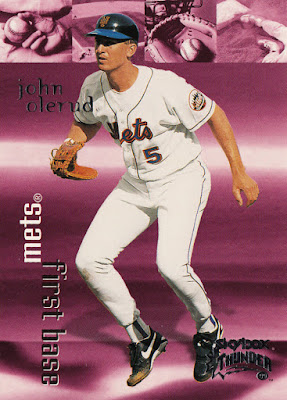 The background of these Skybox Thunder cards makes me think of the backdrops that photography companies utilize on school picture day.  It also appears that Olerud -- never fleet of foot -- is floating in a Peter Pan-ish fashion. 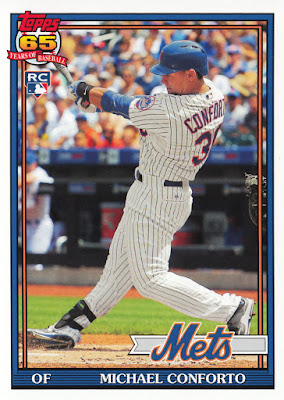 Most excellent!  Michael Conforto's rookie from 2016 Archives is a real looker.  It's a solid photo choice of the young outfielder that's only amplified by the '91 Topps motif. 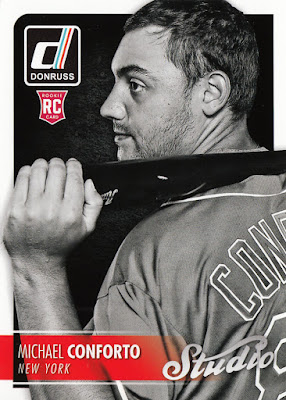 While we're on the subject of Mr. Conforto, how about this terrific Donruss Studio card?!  It's probably my favorite card of the package.  Man, Panini really managed to make an impact on me this year with the Donruss label.  From the Studio cards to the Rated Rookies to the '82 subset, I'm finding myself more enthused about their offerings than those of Topps.

Here's a roundup of some of the other great Mets cardboard that Nick sent along.  Some new, some dupes, but all very much appreciated! 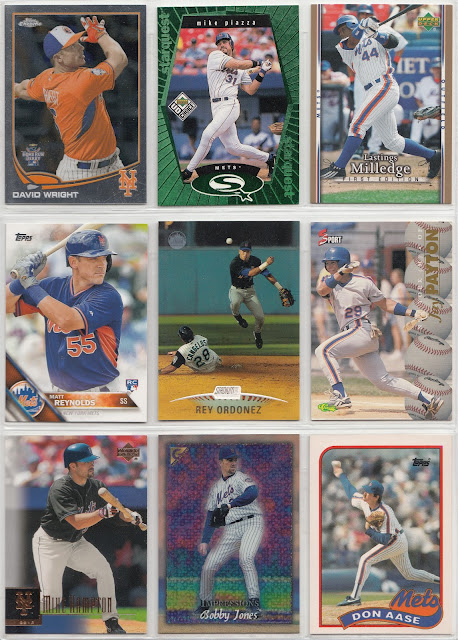 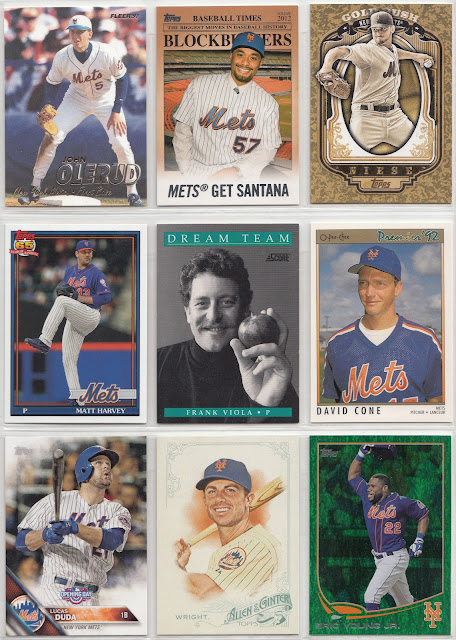 Beyond the Mets, Nick -- as always -- offered up some fine additions to my collection of Vlad Guerrero cardboard. 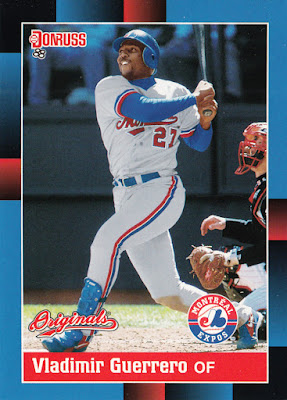 If I had to pick a favorite, I'd call this 2002 Donruss Originals "Aqueous" variation 1A... 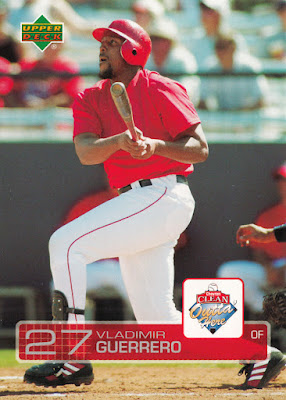 ...and this Chevron "Clean Outta Here" oddball "1B" since it was so hard to choose between the two.

Oh, the whole "Aqueous" thing with the Donruss card?  It just means the coating on the front received a slight gloss, so it's a bit fancier than the regular base cards.

Some other Vlads worthy of highlight... 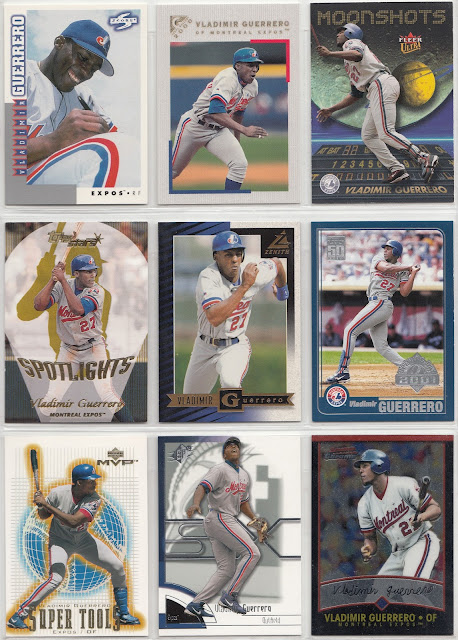 When all the dust settled and I entered the new cards into my Zistle account, my Vlad counter went up to 410 unique cards.  Next to Piazza, it's my biggest single player collection.  I certainly have Nick to thank for a good portion of that!

And what package from Nick would be complete without a few extra Olerud and A-Rod cards? 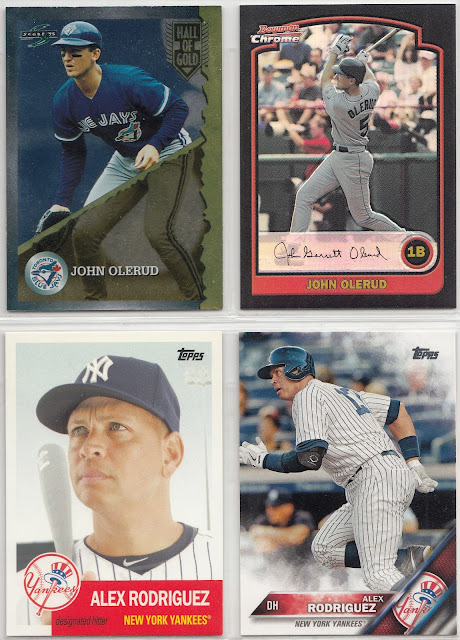 These are just a few of the handful that were included.  The photo chosen for Alex's flagship card this year isn't my favorite.  Maybe if it were zoomed out a bit?  The Archives card is pretty classic and more than makes up for it, though.

As usual, Nick, I'm thankful for the awesome bundle of cards you sent.  Very generous and most helpful towards my collecting pursuits.  Thank you!