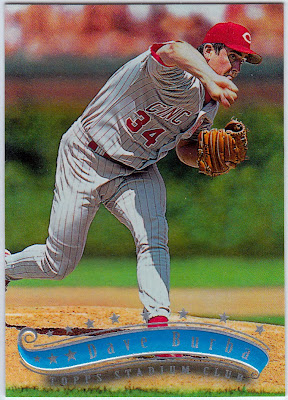 I didn't win the Mega Millions jackpot, so I guess I'll have to keep my job and continue shopping at Wal-Mart.  Oh well, I can think of worse things.

Although the lottery gods didn't smile upon me [Ed. Note: Honestly, I didn't even buy a ticket, so what am I talking about?], I recently won a different sort of jackpot.  Thanks to Jeff at Fan-Attic Sports Card Blog, I was one of three bloggers randomly selected to be the recipient of a Happy Holidays PWE.  Christmas cards, if you will.

The set collector that I am, I was quite pleased to get the above Dave Burba from 1997 Stadium Club, which is my favorite TSC set of all-time.  I'm slowly but surely winding down my 'need' list for this handsome set.

Additionally, a pair of cards for my quest to put together a 2011 Topps Cognac parallel set.  Or at least come somewhat close. 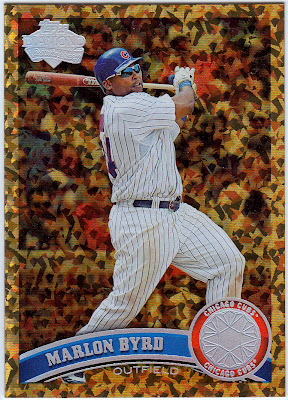 Marlon Byrd had quite a nice 2013.  He not only signed a minor league contract with the Mets and then made the roster out of spring training, but he happened to be a very productive run producer for the Amazins.  He parlayed that into a trade to the pennant-contending Pirates in August and, eventually, a postseason appearance.  Oh, and then there's that two-year contract worth $16 million bucks he inked with the Phils in November. 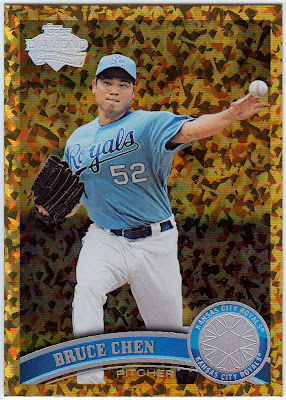 The base version of this Bruce Chen card is contained in the Update & Highlights portion of 2011 Topps.  I mean, what's an update or traded set without Bruce Chen, right?  The guy has a lot of destination stickers on his suitcase.  He looks pretty good in the powder blue Royals cap and jersey.  And its especially nice looking on the cognac backdrop.

Thanks for a nice bit of holiday cheer, Jeff.  And Merry Christmas to ya!