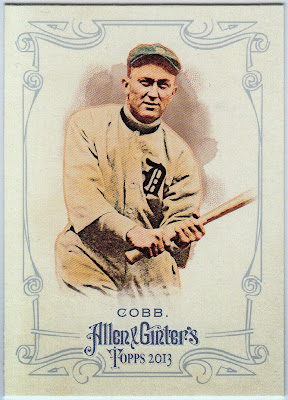 In addition to the three Mets beauties featured in Part 1 of this post, Ol' Santa also dropped off a bunch of 2013 Allen & Ginter packs.  As I've mentioned in the past, Ginter isn't a brand I actively collect, mostly because I'm not keen on all the odd non-baseball insert sets.  Also, I don't like my baseball card sets to have the likes of Wolfgang Puck or Desmond Tutu mixed into the regular checklist among the ballplayers.

However, I've always admired Ginter from afar based on the beautifully composed portraits framed within a very tasteful border.  If A&G didn't have Erin Andrews, the Pope, or Adam Richman as part of its checklist, I'd probably be a perennial devotee to the brand.  As it is, I've kept my distance.

But, that doesn't mean I wasn't anxious as heck to rip into the packs to see what all the fuss has been about. 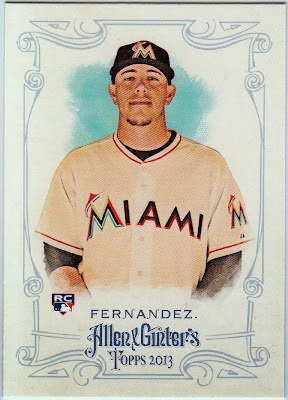 I certainly wasn't disappointed in the actual baseball player cards.  As a matter of fact, I'm so taken by them that I'd actually toy with the idea of trying to complete the set.  Then again, with a baby on the way and my hobby funds primarily devoted to Topps flagship, Update, Heritage and Archives on a year-to-year basis -- plus a few other random insert and parallel sets -- can I really be expected to chase yet another set?    And, do I really want to be held hostage by that pesky Torquemada or Panama Canal card to finish the set? 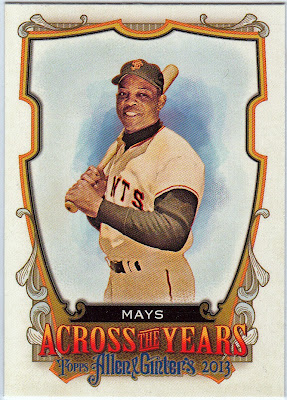 As I already touched on, Ginter is famous for a bevy of strange insert sets which most collectors accept with an ease that baffles me.  A couple of the packs I opened had one actual baseball card, while the remaining cards were, for instance, Fort Knox or the planet Mercury.

But, the one A&G insert set that hit the sweet spot was the "Across the Years" entry.  You get a fancily framed ballplayer on the front and info about the player's birthdate on the back, including other famous folks who also share that birthday.  It's off the beaten path, yes, but at least it's still baseball. 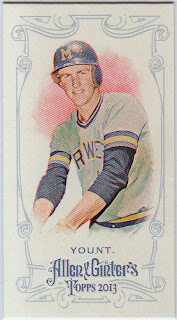 If there's one thing that puts Ginter collectors on Cloud 9 it's the mini parallels.  And, I'll admit they're pretty cool. I find all the variations for each somewhat maddening, however, and couldn't imagine trying to keep track of it all. Plus, I very much dislike the horizontal minis; they just don't work.  I'm not a huge nut for minis, but I wouldn't mind having a page or two of them just because.

All in all, I did enjoy my first-ever Ginter ripping experience.  It's nice to deviate from the norm once in a while, and I can freely admit that I have a new appreciation for the brand after getting to see them in an up-close manner.

And, speaking of deviating from the norm... 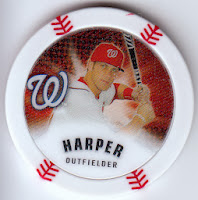 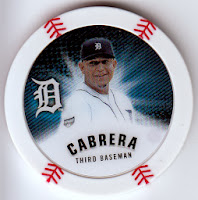 I also found a few of the Topps Chipz packs nestled into my Christmas stocking.  I've seen these in Target, etc. the past few months but haven't had the impulse to explore them much previously.

But, keeping with the exploratory theme set forth by the A&G packs, it was refreshing to dip into something new within the hobby sphere.

Kinda like the Topps Coins of the past, but much bulkier in weight, these Chipz are something fun for kids and likewise interesting for player/team collectors.  For the most part, the player photos are different from the same one or two that Topps recycles each year for all their other offerings.  Each Chip has gold and silver variations -- and even magnetic parallels.  My one gripe would be the lack of numbering for each chip, making set building and organizing a difficult task.  Otherwise, they are what they are: Chipz.

Whether it was Allen & Ginter cards or Topps Chipz, I had a good time sorting through all my new goodies on Christmas morning.

And, as Mrs. K is fond of saying anytime she gets me cards, "At least it'll give you something to blog about."