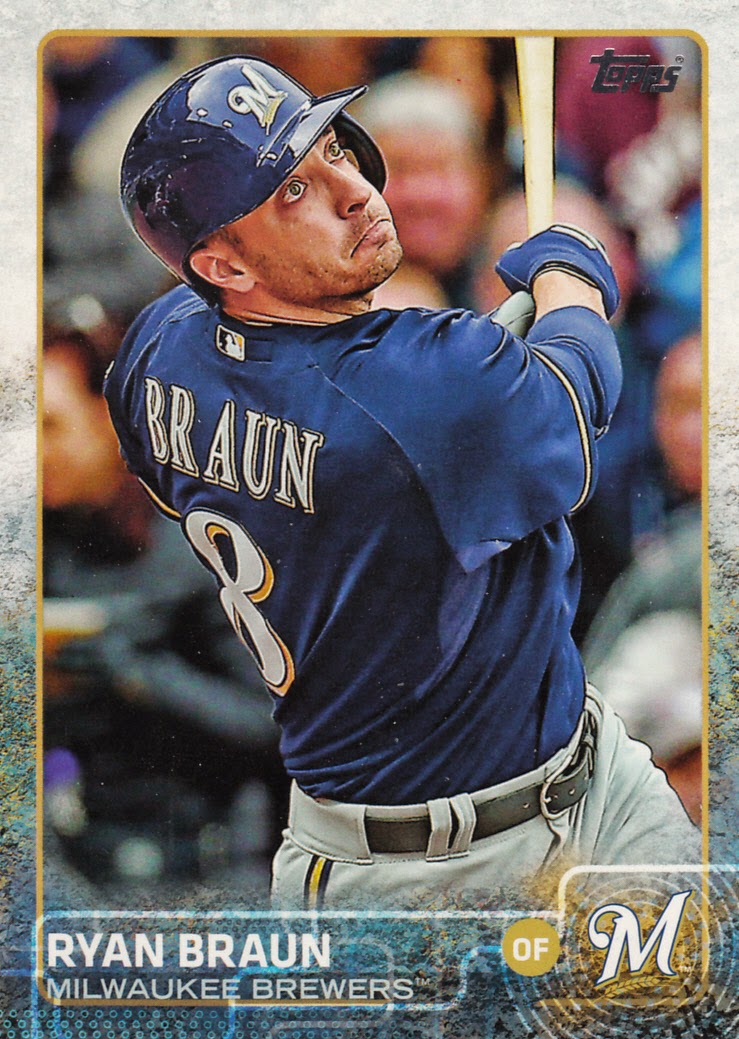 At last, Topps 2015 and I are intimately acquainted.

My wonderful wife, Mrs. K, surprised me by tracking down two rack packs and a hanger box from the WalMart just across the state line in Maryland.  The packs were waiting for me on my card table when I came home from working an evening event at the school.  A very nice surprise, indeed.

Anyhow, no need to bore you, my handsome/lovely reader, with an agonizing amount of scans, since everyone and their mother has posted oodles of pics of the '15 Topps cards for the past couple weeks.

But, it's become tradition in the short few years I've kept up this blog to share the first card of the new collecting season.  After all, I really enjoy seeing what all of my fellow collectors draw as their first card.

As you can see above, I didn't get the most palatable name.  I've really soured on Braun over the past couple years for obvious reasons.  But, you just can't choose these kind of things.

Just a few more scans; I promise I won't overdo it.

My first Mets card of the new year...


I was not a fan of these uniform tops, which were part of Military Mondays at Citi Field in 2014.  Don't get me wrong, I'm as patriotic as can be, and I admire the hell out of our servicemen and women.  But, camo baseball tops just don't do it for me.  I'd rather them just wear an American flag patch on their sleeve or on the side of the cap instead.  But, that's just me.

And, I can't end this entry before I share a couple of quick opinions about this year's product.  Most of these things have been mentioned or expounded upon throughout the blogging universe, but, well, I can't sit by idly without throwing my two cents into the bucket.

-- Colorful borders, which are reflective of each team's color scheme
-- Bigger base set, with 350 cards for Series 1
-- Non-foil player name on the card front... Woo!!!
-- I LOVE the card backs. Maybe the most attractive in a decade or more.
-- The gold parallels are great looking this year!

-- The Rookie Cup logo and "Future Stars" tag should NEVER, EVER be piggybacked.
-- Way too many super-duper close-up photos for my taste. Tight cropping has become too much of a fad these past couple years.  It makes for a bland offering.
-- Even though I love the look of this set and appreciate the colorful border design, I kinda miss the red and blue parallels from the respective retail giants.  It dawned on me as I was opening the packs and I became sad.
-- The inserts. They're pretty uninspired.  Again.  Not even any minis to speak of.
-- Boring tri-panel League Leader cards.  Along with team cards, these just don't excite me.

What does excite me are fantastic base cards like this...


Hey, bottom line, I'm thrilled that 2015 baseball card season is underway. The base cards are colorful and mostly fun and I'm looking forward to tracking down all the Mets cards.

Even the crummy inserts.