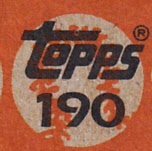 I'm embarrassed to admit this, but my last installment of Four Topps came nearly three months ago.  February 2, in fact.  The '90 Matt Nokes was the winner of the four-card derby on that occasion, should you be interested.

Anyhow, let's get on with it.  Four cards from the glorious Topps years of 1987-1990, which were the years I cut my teeth in the hobby as a young'n.  And, today's totally random card number is, as always, courtesy of Random.com.

As always, we begin with the elder of the batch, '87 Topps.  With 190 being a semi-glamour number within the Topps checklist--reserved for current or past All-Stars normally--we draw three-time American League All-Star and multi-time Gold Glove backstop Jim Sundberg.  The powder blue Royals unis from the '80s always have eye appeal, and they look that much better when framed within the wood-grain beauty of '87 Topps.  Hey, Stat Man: Though he wasn't an All-Star in 1986, Sundberg set a personal career-high with 12 homers for Kansas City.

The Candyman!  Maldonado was a key cog in the highly successful Giants clubs from the late '80s  The Puerto Rican outfielder was never an All-Star during the course of his 15-year career, but he's a guy who was a fan favorite wherever he played.  And he played in a lot of places, including L.A. (NL), Toronto, Cleveland, Texas, Chicago and Milwaukee in addition to San Fran.  Hey, Stat Man:  Candy clubbed 20 homers for the Giants in 1987, which were a career-best at the time.

A two-time All-Star, Witt finished fifth in ROY voting in 1981 and third in Cy Young voting in '86, both occasions as a member of the Angels.  A pretty standard photo from the '89 set, as it appears Witt is enjoying a casual moment during warm-ups prior to the game.  Call me crazy, but I like the pink, gold and Forum blue color combo that Topps concocted for the Angels cards in '89.  Hey, Stat Man:  Witt won 13 games for the Halos in '88, marking the final time in his career he would reach double figure wins.

We conclude with veteran righty Rick Reuschel, who started the '89 All-Star game for the NL squad.  I knew this without having to look it up because ESPN's 30 for 30 Bo Jackson doc was on the other day and they showed the sinker baller in action....perhaps for not the best reason.  Reuschel served up back-to-back homers to Jackson and Wade Boggs in the bottom of the first, his lone inning of work.  The Junior Circuit won the contest, 5-3, in case you were curious.  Hey, Stat Man:  Rick won 17 games for the '89 Giants and finished eighth in Cy Young voting.

And the Winner Is:  A pretty solid but unspectacular lot of cards at the 190 slot.  It was down to Sundberg and Candy for the gold medal and I opted to go with Candy because I like the photo better.