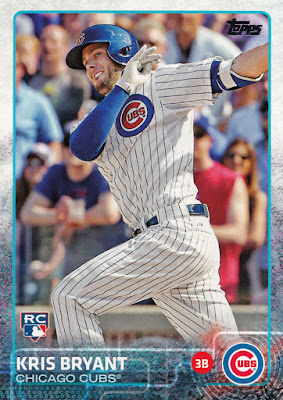 An absolute Christmas highlight for me over the past few years has become the gift of the Topps factory baseball set.  Beginning in 2010 and every year since, I've included this item on my Santa list and each time I've been fortunate enough to receive it.

I truly do understand those who are against obtaining a complete set in this way.  For some, the only way to build a set is to, well, build it.  From scratch.  Via pack ripping or trading or by whittling down the checklist bit by bit at card shows.  And, I've done this before and have enjoyed it immensely.  After all, if you want a complete Heritage or A&G or Gypsy set, it's the only avenue.

It also takes a long time and can get quite expensive.  Maybe the flagship isn't as money-draining as, say, Heritage, but busting packs and taking on hordes of doubles can be quite maddening. 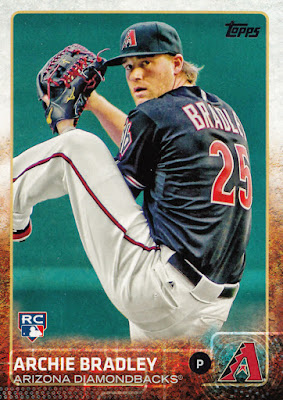 Since I like to build--or at least attempt to build--the Heritage set each year, I figured my budget couldn't handle also shelling out dough for a hobby box or blaster boxes and rack packs, etc.  Therefore, I went all in on the factory sets and haven't looked back.

So, while the factory set method may be a bit of a cop-out, it's been my go-to move for the past couple years.  I mean, I do enjoy the process of opening the crisp box and taking the time to examine each card before sequencing them according to the checklist. 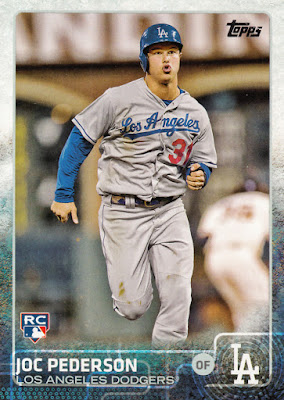 However, the real joy of a factory set--the hobby edition specifically--is the acquisition of the five-card rookie variation pack.  Sure, by going the factory set route, you miss out on the chance to pull an auto or a relic or an auto relic or a foil card or a gold card or a pink card or an insert or whatever other bells and whistles Topps can conjure in a given year.  But, for my money, I'll take the rookie variations every day of the week and twice on Sunday.

Last year was a pretty nice year for the variation pack, as it included the likes of Matsuzaka, Abreu and Bogaerts.  The year before that, Jose Fernandez and Manny Machado highlighted the quintet.  And, of course, who could forget 2012's Harper, Darvish and Cespedes bonanza? 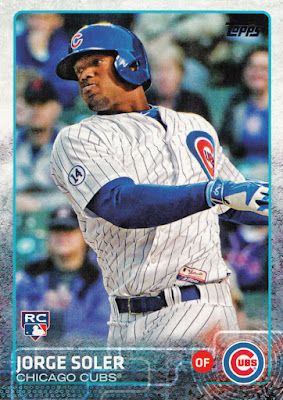 This year's five-card crop is pretty strong and may eventually go toe-to-toe with or surpass its predecessors. After all, it includes the prince of the hobby right now, Kris Bryant.  That alone should enter it into the conversation as best of the decade.

Obviously, Bryant doesn't stand alone.  Despite an uninspired finish to his rookie campaign, Joc Pederson still smashed 26 homers, was an All-Star, and even competed in the HR Derby this past year.  Archie Bradley's big league debut was as good as it gets, as the big righty out-dueled Clayton Kershaw for the victory in April.  Jorge Soler battled injuries much of the '15 season, but was a big postseason factor for the Cubs, flaunting his colossal power in the process. 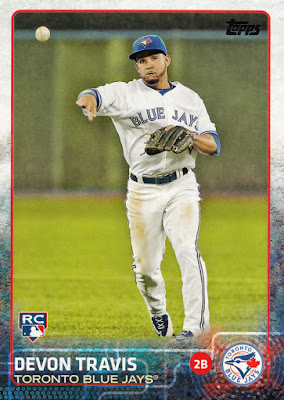 Then there's Devon Travis.  I gotta admit, I didn't know a dime's worth about Devon Travis and kind of did a "Huh?" when I opened the little cello-wrapped package that contained my variation cards.  But, looking up his numbers from the past season, I was pretty impressed.  A .304 BA with 8 homers and 35 RBIs in just 62 games before injuries befell him.  Beyond that, the analytics crowd seem to swoon over the guy's performance in 2015 and think he's gonna be a huge deal for the Jays moving forward.  At least that's the impression I got from reading one column.  But there were so many wRC+s and BABIPs and fWARs that I could be mistaken.

Anyhow, that's your rookie variation pack from 2015's factory hobby set.  If you haven't started building your '15 Topps set yet, or maybe you lost some motivation after Series 1 and never carried through, I highly recommend getting back on the horse and grabbing this set if for no other reason the extra Bryant rookie.