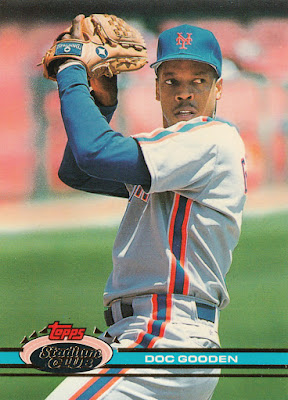 So I teased this one a few posts ago, and now it's time to dig in.  Trade No. 24 via Zistle finally brought me and fellow Mets fanatic metscardboard together for a long overdue--and quite massive--trade.

A total of 260 cards were moved with 130 going in each direction.  It took me some time to track down all the cards, because I have stacks and boxes of Mets cards everywhere.  I guess that's one of the reasons I was procrastinating such a trade for so long.  The task of actually finding all these duplicates and getting organized was quite daunting.  But, it gave me a good kick in the butt to begin a better level of organization.  Slowly but surely, I'm getting there.

Okay, let's get to the cards.  Rather than scanning all 130 cards, I decided to make like Casey Kasem and put together a Top 40 list, ranking my favorites from this most abundant exchange.

A tough task, indeed, to whittle down such a great collection of Mets cardboard.  I mean, the Doc Gooden '91 TSC you see in the lead-off spot did not make the cut.  So that just goes to show you.

A little taste of 2008 Topps Heritage begins the countdown.  One of the most unique and distinctive designs in the history of Topps cards.  And, Endy is a cult hero in Mets annals.

He only played one season in Queens and, on top of that, got hurt in the first game of the 2000 postseason and missed the team's run to the World Series.  Still, Derek Bell holds a special place in my heart.

One of the best pinch hitters in club history, Matt Franco makes the countdown on this '98 Collector's Choice base card.

I really like the design here.  Can't say I was too familiar with 2006 UD Artifacts prior to seeing this card, but I like it a lot.

First of all, it's Super Joe!  Secondly, great ad placement here.  If you lived in the NY-Metro region during the '80s and '90s, you know all about Nobody Beats the Wiz.

Nice rookie card here of Mike Pelfrey.  Part of the regular base set, Mike's card is number 1127 on the 2006 UD checklist.  Yowzers!

From my favorite Stadium Club set of them all ('97), one of my favorite all-time Mets.  Lance's card gets a boost by the Wrigley bricks in the background.  They always help a card's appeal!

Fonzie shows off his vertical in order to escape some contact around the second-base bag.  This card is a great example of why Ultra was such a great brand.

Probably because they were so elusive during my early collecting days, Pacific cards always seem to find favor with me.  Ones that feature rookie-year Melvin Mora are even better.

From the 2004 MLB Showdown game set, Timo Perez slugs his way into the Top 40.  Because these are so tough to come by (at least in my experiences), this one gets a bump.

These Swell oddballs are such a great way to grab cards of players from yesteryear that would otherwise be difficult to acquire.  This is my first regular-sized Mets card of the 'original' Frank Thomas.

It's not that I'm a particularly huge fan of 2005 Upper Deck, but sometimes the photo choice and the design elements come together to make a great-looking card.  On top of that, Keppinger is a tough Met to come by!

I've always been a fan of 2003 Donruss.  Nice clean design, no borders, solid photo choices.  Rey-O in the process of turning two on this one.

Like I said, me and '03 Donruss are okay.  Awesome photo here.  That face and that post-swing pose are tell-tale signs that Mike just stung a ball pretty good.

Yes, still a sucker for this set and pennant design, even if it's in rip-off UD form.

One of the most unique names in Mets lore, Lastings Milledge takes a mighty cut on this 2006 Fleer Tradition card.  If we're being honest, I really dig to the mini ball cap in the name box.

Yeah, the background is busy, but the photo choice is killer.  This card is part of the "Victory's Best" subset from 2001 UD Victory.

Pretty tough to argue with any of these latter-day Turkey Red cards.  And, since this one features El Duque, you might be tempted to joke that the Cuban righty was in his prime for the the original Turkey Red cards.

It's horizontal and it's Carlos Baerga.  Both of those factors most certainly play into this card's favor.  I also happen to be a champion of '97 Topps.

A most unique photo choice for Lee Mazzilli on this one; and I love it!  I also think it's pretty neat that Fleer saw fit to give the Brooklyn boy a nod in their '06 Greats of the Game set.

Kaz Matsui cards get special treatment from this collector.  Must be the first name.  In addition, I like the looks of this '05 UD Pros and Prospects set.  The photo choice plus the design elements all work together perfectly on Kaz's card.

A really memorable Rey Ordonez card normally features the Cuban shortstop in the throes of an amazing defensive play.  But, in 1998, Topps Stadium Club captured perfection at the plate for Rey.

Not nearly as fond of 2004 UD Vintage as the prior years, but it's still solid.  Design aesthetics aside, it's the trademark Jason Phillips rec specs that sets this one apart and puts it safely inside the Top 20.

Pacific went crazy with silver foil and spikes of color in this 1996 set.  It's totally dated and totally awesome!

For my taste, Topps Finest was at its best during the mid to late '90s.  This one, from 1996, is a great example of that.  The protector film is a bit annoying, but it doesn't diminish the vibe of the card.

From 2008 TSC, this one eluded me for way too long.  Oddly, David has now been featured one three Stadium Club base cards, and each is a horizontal shot.  Hey, works for me!


Another one of those swell Swell Baseball Greats.  This is my third Mets card of the colorful Piersall, and it's perhaps my favorite.

From the '91 Swell set, a great posed shot of rugged backstop Jerry Grote, a member of the '69 World Champion Mets who played 12 seasons for the club.  The '91 set features what I would consider my favorite design of all the Swell sets.

Nolan Ryan in a Mets uniform on a Stadium Club card?  Yes, please!

Maybe I'm the only one daft enough to rank a '94 Stadium Club David Segui base card above anything featuring Nolan Ryan.  But, I make no excuses or apologies.  This very card has been on my radar for a long time.  I offer no explanation beyond this: I like dugout shots.

We have now reached the Top 10!

Not just Fleer Tradition, but Fleer Tradition Update!  Therefore, tougher to find.  The most intriguing thing here is seeing a photo of Payton fielding first base.  A career outfielder, I can't think of any other card--either from early in his career or later--showing him playing on the dirt.  Pretty cool!

A New Age Performers insert from '15 Heritage, this one features the former NL ROY rocking holiday camo gear. DeGrom hurled 6 2/3 innings of shutout ball on Memorial Day 2014, and that when the photo on this card was taken.

Yup, another from '98 Fleer Tradition Update.  Nomo-as-a-Met cards are a very limited species, and to acquire a toughie like this makes for a happy Met collector!

Upper Deck's mid-'00 flagship releases were chock full of amazing photography.  Loads to horizontal treasures just like this one.  I mean, who doesn't enjoy plays at the plate?

I think I made a mistake earlier when I declared that '91 Swell was the pride of the litter.  What was I thinking? Clearly, the '89 release is superior to its siblings.  And what better way to amplify that statement than with Gil Hodges, Mets first baseman?

Okay, now this is Upper Deck at its finest right here.  Yeah, double plays or home-plate collisions are fun and exciting and all that, but its little slices of "inside baseball" such as this that make us hobby enthusiasts smile.

Well, how can we argue with this?  Of all the double-dip shots I've seen (and there are hundreds and hundres out there), this might take the cake.  At least in terms of a collision captured in a vertical format.  Ordonez in his natural element, for sure!

I really wish these Topps minor league cards were offered in retails outlets.  As it stands, these are hobby-only. Thus, my only exposure to them has been via card shows or trades with fellow bloggers or Zistlers.  Therefore, they get even more love from me.

Though the card tabs him as a "Star Rookie," this isn't David Wright's Upper Deck rookie.  He actually had a card in the 2004 flagship set as well as one in 2001's Prospect Premieres main set.  Nonetheless, a cool card to have of the man who will go down as one of the greatest players in club history.

And, finally we come to Numero Uno...

It helps that I've had this card among my most wanted since I first set eyes on it in 2013.  But, this is a totally awesome card on its own merit.  It features a unique camera angle from one of Wheeler's bullpen sessions. Beyond that, it's a completely different photo than on any of Wheeler's other 2013 Topps cards.  That isn't necessarily a given these days, as you know.  Overall, a great rookie card to own of a fine young pitcher who will hopefully rejoin the Mets rotation by June.

If you held on for the whole countdown, I thank you!  By far the biggest trade I've completed on Zistle.  As I've stated before, big trades aren't necessarily my thing.  But, swapping cards with a fellow Mets fan was pretty fun and certainly made the decision to do a bigger trade that much easier.