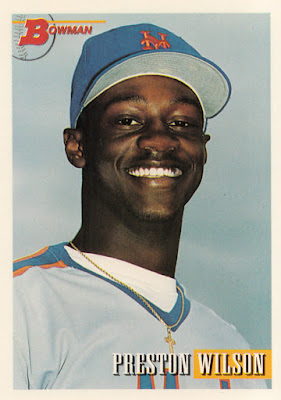 A nice three-card quickie is what my 22nd trade on Zistle amounted to.  Certainly nothing wrong with that.  Like I've stated on here before, more times than not a smaller trade is the way to go.

My trading partner was a member I've swapped with before -- a fellow Zistler named Gerry.  He only asked for one card in exchange for these three.  Like I said, quick and easy.

Preston Wilson's 1993 Bowman rookie is my favorite of the trio.  I'm really a sucker for Bowman from this time period.  I acquired very little of it back then, so it's a treat to come about it nowadays. 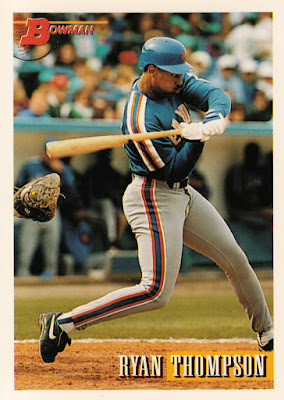 Also from the '93 set, Ryan Thompson.  For those who might not recall, Thompson was a former blue chipper who the Mets acquired from the Blue Jays as the proverbial "player to be named later" in the David Cone trade in 1992.  The Mets also landed Jeff Kent in that deal. 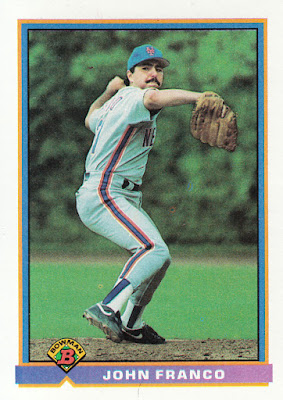 And from '91 Bowman, one of Brooklyn's favorite sons, Johnny Franco.  I think there may be just south of a zillion cards of Franco produced during the '90s.  Will I ever track them all down?  Doubtful, but I'm not in a hurry.  It'll be a sad day once there are no new John Franco cards to collect.

That's all she wrote for this one.  As you'll see in an upcoming post, I recently completed the antithesis of this trade in terms of size.  To the tune of 130 cards!