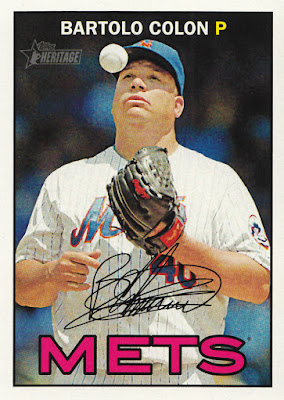 Yes, I completely understand that the content of this post is way past relevancy since Heritage has been out for nearly a month now and everyone and his sister has already had their say.

But, it is my favorite of the Topps brands, so I would feel somewhat inadequate if I didn't flick my two-cents into the collection jar...past due or not.

About a week to 10 days after Heritage hit shelves across the country, the stuff finally started appearing at the usual retail giants in northern Delaware.  I'm not sure why we're always late to the party here in the First State, but that's the reality of it.

So I opted for a blaster as a means to procure my first taste of '16 Heritage.  By standards, it was a pretty unassuming assortment of cards with nothing of extreme note contained therein.  But, it's Heritage, so even the base cards are an 'event.'

My first Mets card from the brand is as you see it above; the ageless one himself, Bartolo Colon.  In my estimation, it's the perfect depiction of the roly-poly right-hander.  Nothing seems to faze the guy, and even in the tightest of quarters he can be found flipping the ball up and down at the back of the hill like some kid leaning against the wall at recess. 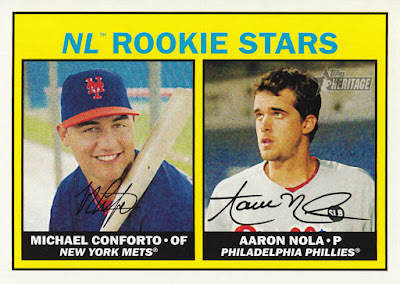 A great dual rookie card here, featuring a couple of lads who should be big contributors in the NL East for many years to come.  At least fans of both clubs hope that's the case.  Conforto stands to be the close-to-everyday left-fielder for New York, while Nola projects to be at the front of the rotation in Philly in the near future.

By the way, as others have already mentioned in their write-ups (and quite rightly and eloquently), the 'TM' or 'R' next to the team names or leagues is very, very, very small.  Which is how it should be, but not how it has been the past few years.  A most welcome change this year! 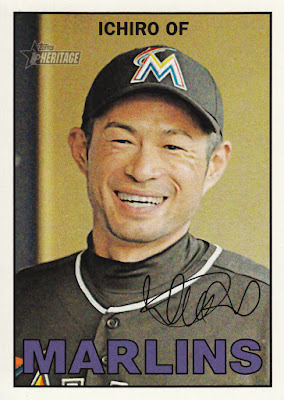 I've gotta say, I'm not to worked up about the clarity (or lack thereof) of the pictures on the cards.  Are they a little grainy?  Sure, but not enough to turn me off to the overall presentation.  On the other hand, I know why it ticks off the purists and I can appreciate the unrest.

By the way, great sig, Ichiro! 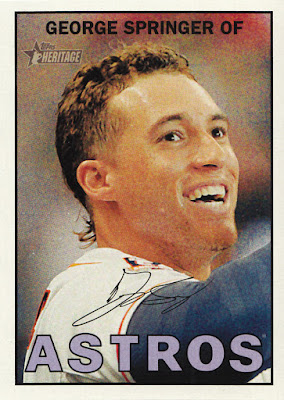 There are many up-close 'headshots' in this set, as was the case from the vintage '67 cards.  If this is a gripe you maintin, maybe Heritage isn't the brand for you?  You can find plenty of photos in Flagship of guys doing cartwheels across home plate or dousing one another with Hershey's syrup.  If that's your thing. 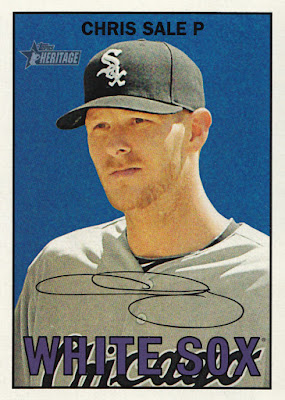 Overall, I'm pretty happy with how the regular ol' base cards came off.  As usual, I'll try to hunt down as much of the set as humanly possible.  In regards to Heritage, getting the first 425 cards on the checklist usually isn't an issue.  It's those final 75 cards--aka the short prints--that'll send us all to an early grave.

My blaster yielded me three of those SP things, in case you were wondering. 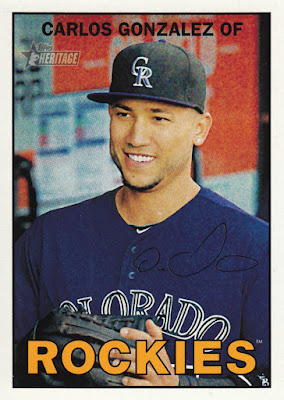 I think CarGo is a short print every year in Heritage.  Or is that just me?  Nope, not just me:  This is the fifth-straight year he's been in the SP section. 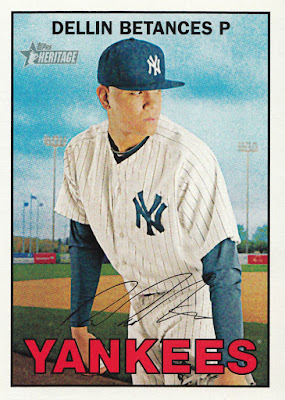 This marks the second time Betances has been a short print in a Heritage set.  His rookie from the '12 set was also an SP. 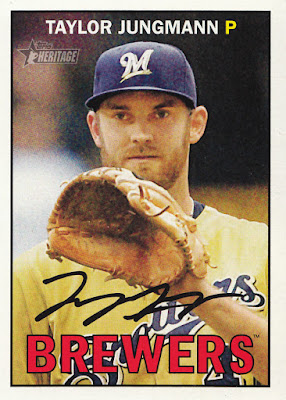 Jungmann made his Heritage debut in last year's High Number issue, so this is a first for him among the land of the short prints.

Anyhow, I'll give 2016 Heritage a thumbs up.  It doesn't hurt that the model for this edition was one of the best-looking sets of the '60s, or any vintage decade perhaps.  But, in terms of execution, I'm good with it.