Breaking Down the Breakdown 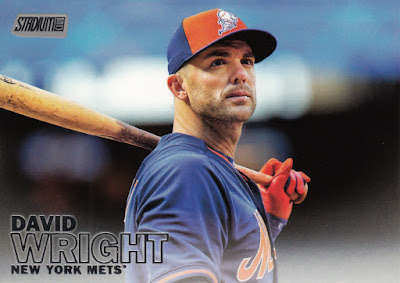 As much as I love trading via Zistle, sometimes nothing beats the fun and mystery of a blogger-to-blogger trade.

And, not so long ago, I had the privilege of swapping cards with Gavin of Baseball Card Breakdown.  Gavin had recently ripped into a box of '16 Stadium Club and had lots of nice trade bait.  So, naturally, I had to get in on that!

In the lead-off spot is David Wright's base card from the Stadium Club set.  Interestingly enough (maybe only to me), every one of DW's TSC base cards dating back to 2008 are of the horizontal variety.  [Ed. Note:  Perhaps a post for a future date?]  Regardless, Wright's newest card is pretty tame relatively speaking, but it's a beautiful card nonetheless. 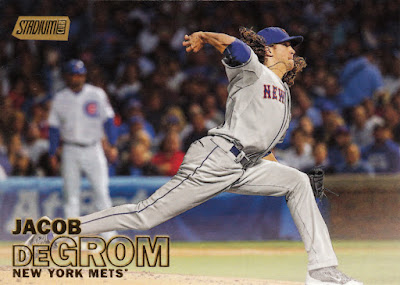 I know the allure of Stadium Club isn't necessarily the insert of parallel content (at least it's not with me), but that doesn't mean we team collectors can't also drool over cards like this deGrom gold foil parallel. 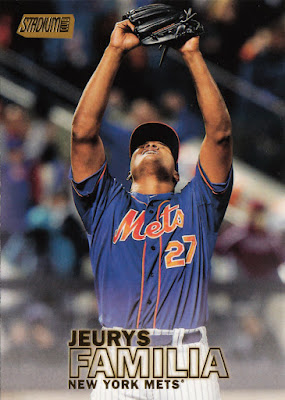 Ditto for Mr. Familia, who has been raising his arms in exultation a lot this season. 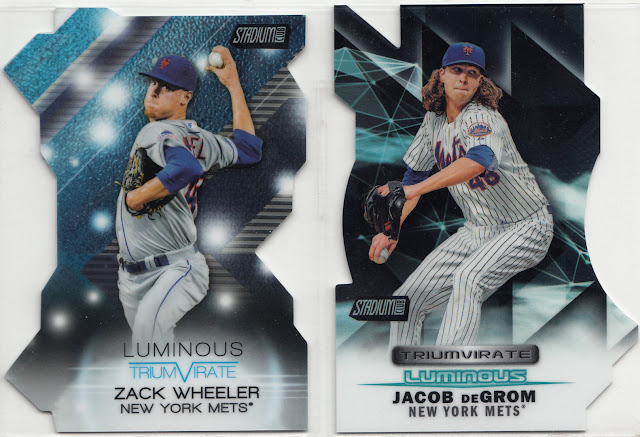 I've never been lucky enough to pull a Triumvirate card from a TSC pack, so I was giddy to get not just one, but two of these bad boys from Gavin.  The deGrom (right) is from this year's product, while Wheeler is from last year.

Gavin didn't stop at Stadium Club content in this trade package, however.  Rather, he went totally overboard by including tons of great Mets from all different products and years.

So let's check out some of the other highlights, shall we? 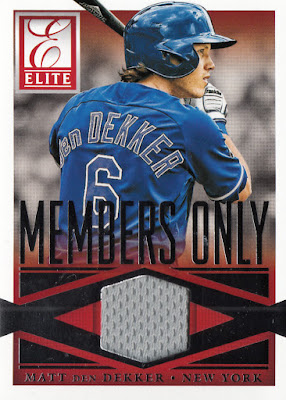 Jersey and relic cards of star players are fun, but I get a certain kind of satisfaction from the lesser-known fringe guys.  I don't think there are too many Matt den Dekker relic cards floating around, so this one is a fun addition. 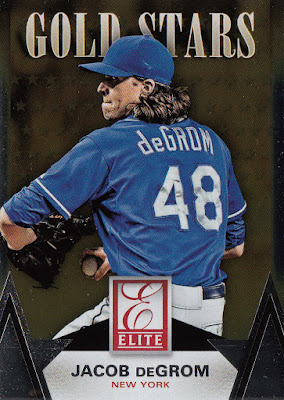 Another nice one from last year's Paninin Elite.  I know they can't use team logos and such, but if they included just a smackerel of orange on that digitally altered jersey, this would be a perfect card. 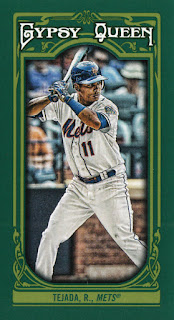 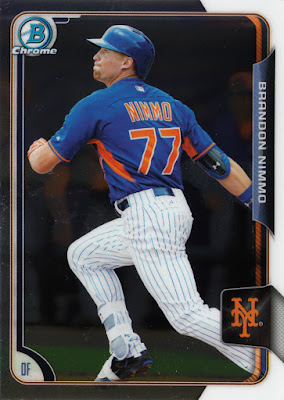 Though he was optioned back down to Triple-A Las Vegas last week, Brandom Nimmo provided the Mets with a nice spark during his first taste of the Majors.  I'm looking forward to seeing more of him in the future. 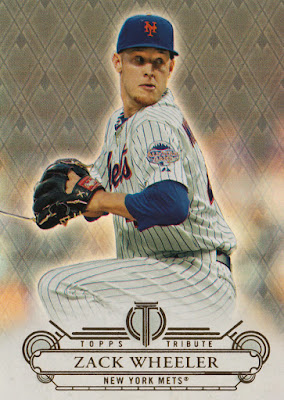 From 2014, a really attractive high-end card of Zack Wheeler.  Topps Tribute to be exact.  Coming off TJS, Wheeler is still expected to pitch in New York this season, but maybe not until late August. 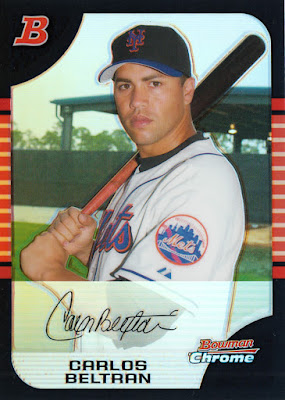 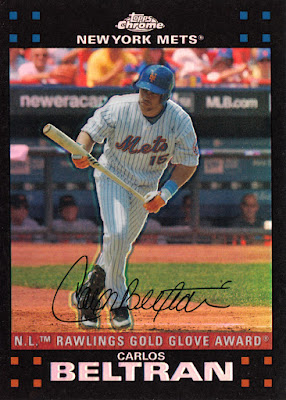 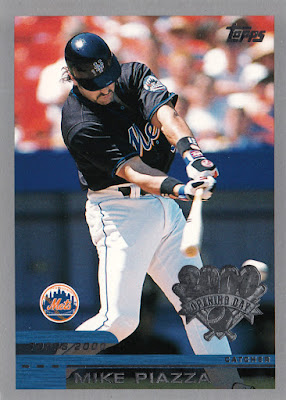 I heard this guy was enshrined in Cooperstown over the weekend.  What a tremendous speech he delivered, too. 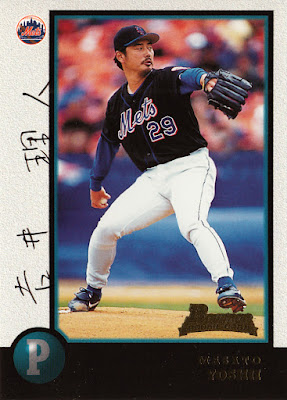 Gavin really hit a home run with this collector by including a hearty helping of Topps Debut cards... 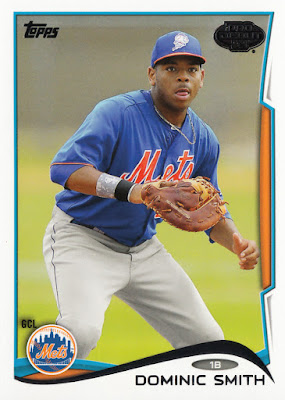 A former first-rounder, Smith is the Mets' first-baseman of the future. 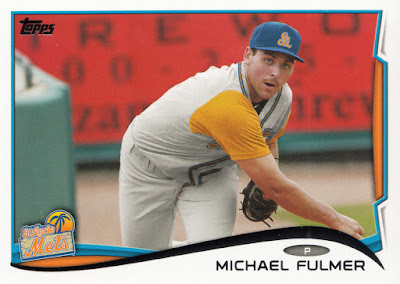 Fulmer is a star in the making...for Detroit.  He was a central part of the trade package that netted the Mets Yoenis Cespedes last summer. 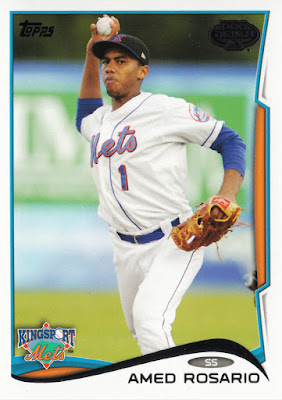 Rosario is batting .354 in 26 games since earning a promotion to Double-A Binghamton.  He's a big piece of New York's future. 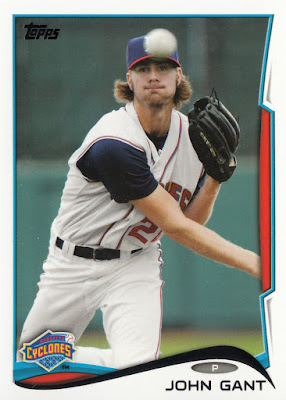 Gant was flipped to Atlanta last summer in the deal that brought Juan Uribe and Kelly Johnson to Queens. 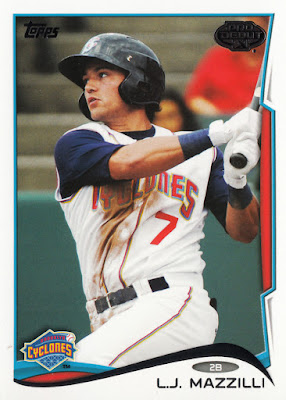 A UConn product and the son of former big leaguer Lee Mazzilli, L.J. is presently playing at Double-A Binghamtom. 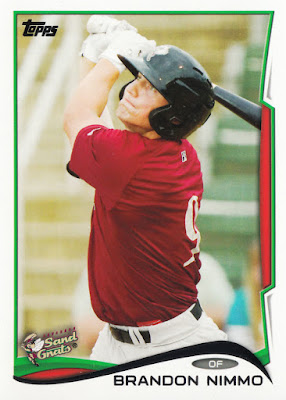 Did you know the state of Wyoming -- Nimmo's home state -- is one of three without sanctioned high school baseball?  Makes it even more impressive that he was the 13th overall pick in the 2011 draft. 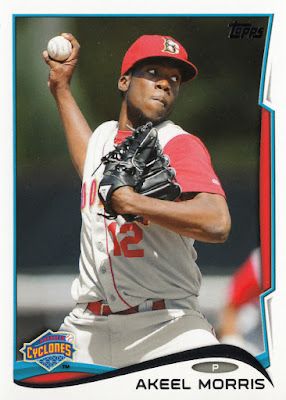 Morris was swapped to the Braves for Kelly Johnson back in June. 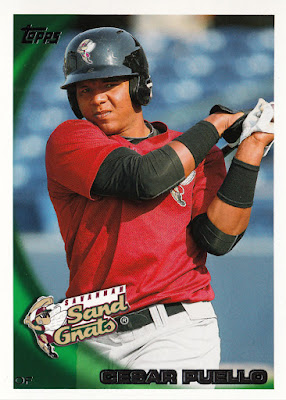 After spending eight seasons in the Mets organization, Puello is now playing Triple-A ball in the Yankees system. 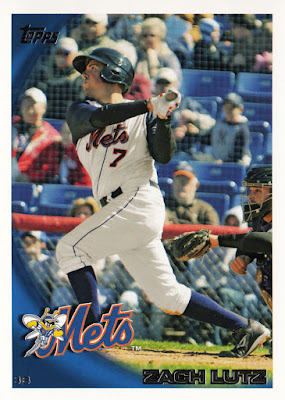 Lutz actually appeared in 22 games combined for the Mets during the 2012 and '13 seasons.  He was released by the organization following the 2015 season and latched on with the Marlins franchise.  He was let go by Miami a few weeks ago.

Wow, lots great stuff!  That must be the end, right?

Nope!  Even more 'new' Mets for my collection... 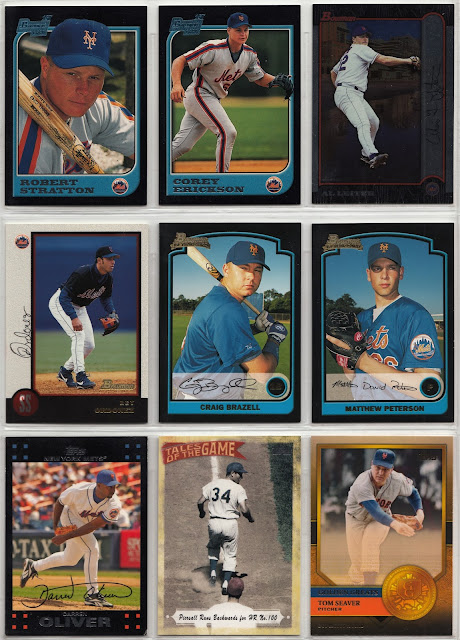 I told you Gavin sent a lot of cards! 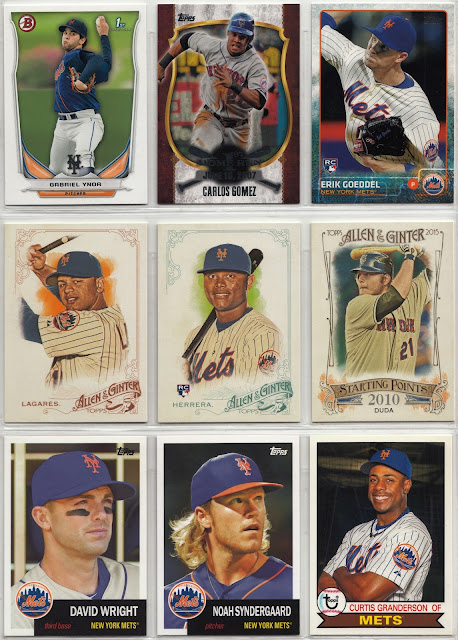 While all of these additions are fantastic and much appreciated, I saved the best piece of the package til the very end... 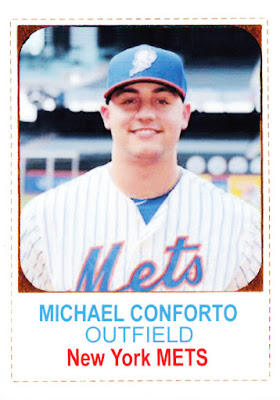 Done in the style of a '70s Hostess oddball, this a treasured addition to my collection.  Simply Amazin'!

And so is this: 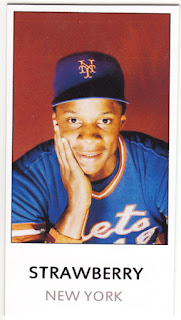 Gavin does such an incredible job with these customs, does he not?  I'm honored to have a couple of fine samples to call my own.

It was a pleasure doing business with you, Gavin!  Thanks for the great loot.  Let's do it again soon!