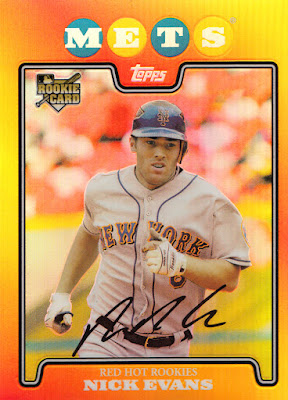 You know which player is red hot heading into the All-Star Break?  Actually, he's been red hot since Opening Day.  He's a former Met and he now plays in the nation's capital.  He's of Irish heritage.  His last name rhymes with Smurfy.

Have you guessed it yet?

Fine, if you're so smart then what's he got to do with the Nick Evans card in the lead-off spot?

Well, nearly a year ago I posted about a 2008 Topps Red Hot Rookie of Murph that I picked up on the cheap from eBay.  Ever since, I've been looking for that card's cardboard cousin.  And, a couple of weeks ago I found one being auctioned by a Canadian seller (I love those canucks!).  Under three bucks shipped, can't beat it!

A quick google confirms that Murphy and Evans were the only two Mets featured in the '08 Red Hot Rookie redemption program.  The cards are basically chrome refractors and are pretty awesome in-hand.  [I've also got the Kershaw from this set in my collection. Maybe I'll feature it one of these days.]

Nick Evans debuted for the Mets in May of 2008, a few months prior to Murphy, and both guys played a role in the club's playoff push.  Evans had three hits (all doubles!) and two ribbies in his big league debut en route to batting a respectable .257 in 109 ABs for the season. 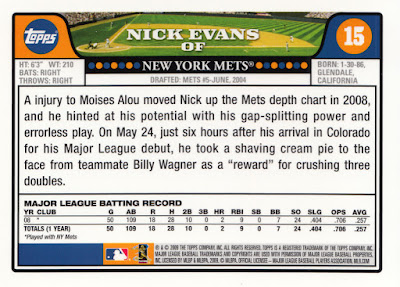 While Evans never really took off -- playing only a part-time role during four seasons in New York -- Murph was a key cog during his time in the Big Apple and is now the undisputed ruler of the National League, especially his former club.

It's a little depressing to look back at my post about the Murphy card, as the Mets had just finished off an August sweep of the Nats, drawing into a tie for the division lead.  Meanwhile, this year's edition just lost three of four to D.C., as Murphy basically demolished the Mets on his own.  As a result, the Metsies are six games in back of the Nats at the Break.