This Bud's for You 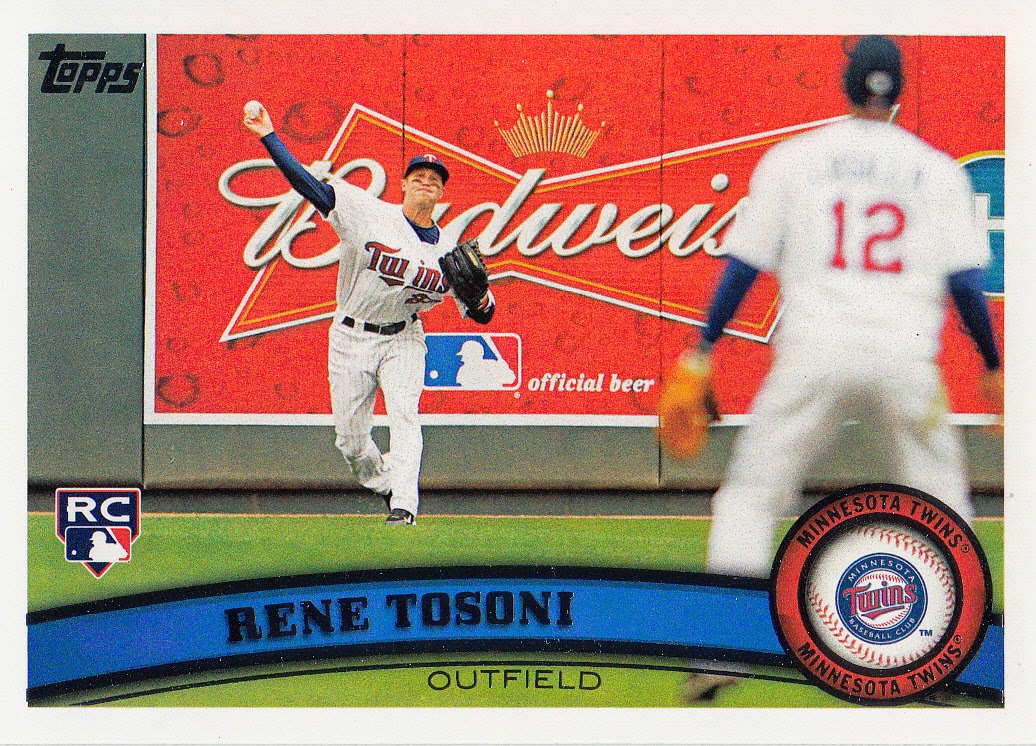 This horizontal gem comes courtesy of my true-blue blogger buddy Marcus (Backstop Cards) who is always quick to share the wealth in terms of cards for my various collections.  Whether it be Mets, player collection favorites or cards for my numerous set pursuits, I can always count on my favorite Padres blogger.

Joining this can't-miss frankenset addition were a few other prime candidates for my Horizontal Heroes project... 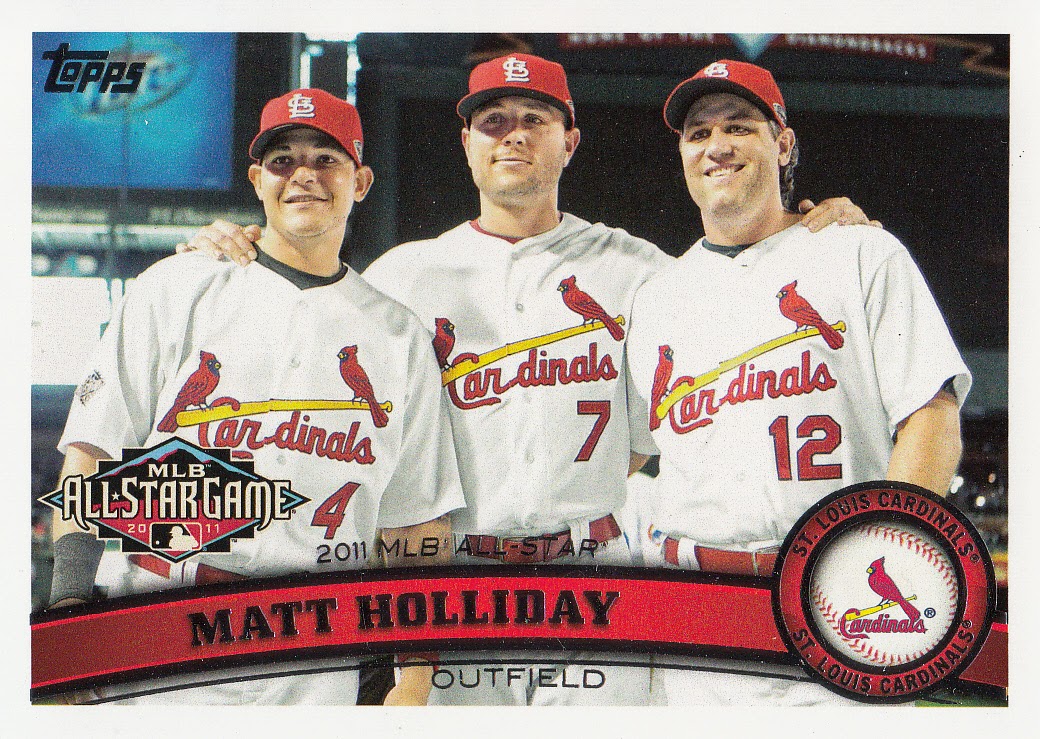 The Update portion of 2011 Topps is loaded with amazing horizontal cards.  The Tosoni card in the header hails from that set, as does Matt Holliday's All-Star card here.  You can never go wrong with a few teammate All-Star cameos, and Yadi Molina and Lance Berkman flank Holliday to complete the Redbird trifecta. 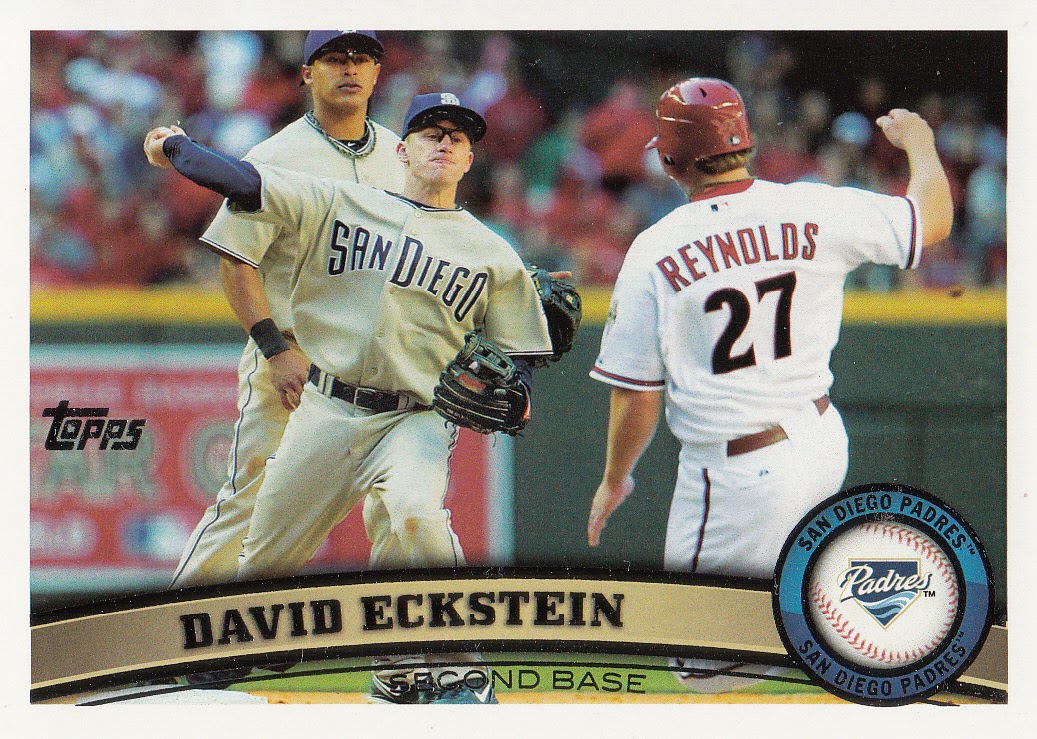 Naturally, if it's a trade package from Marcus, I have to show a Friars card, right?  The pesky Eckstein is a deserving player to have at least one card in the horizontal frankenset. 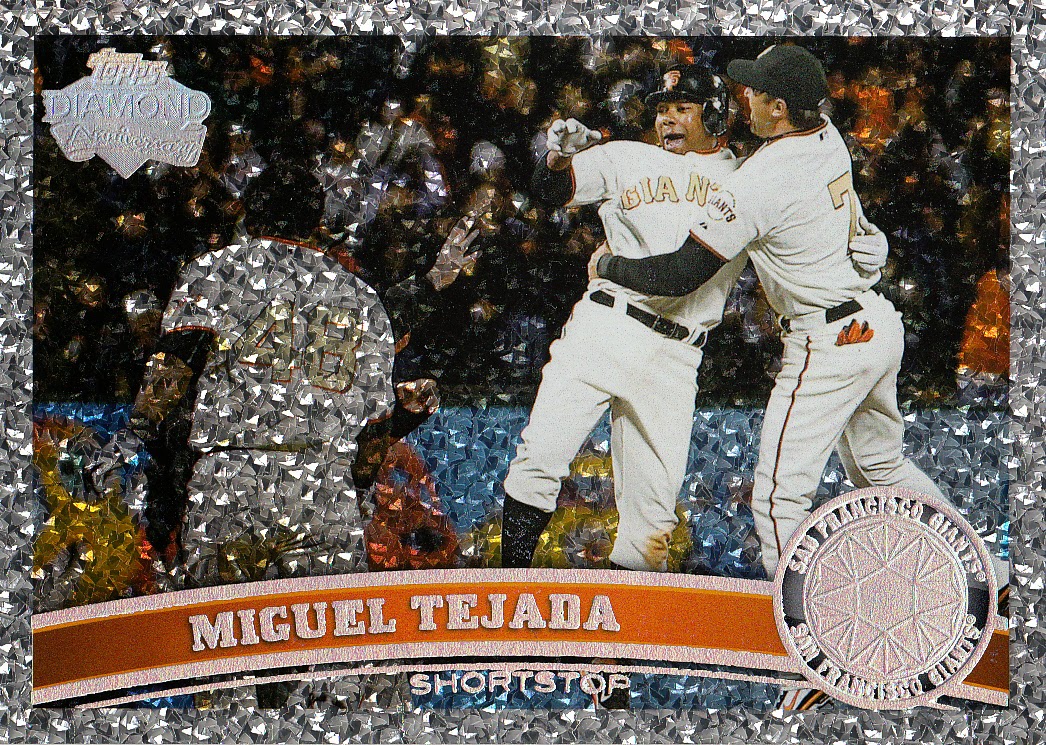 It's sparkly and it has a couple happy Giants jumping around in special-edition alternate jerseys.  Whether it makes the frankenset or not, this card is a true keeper. 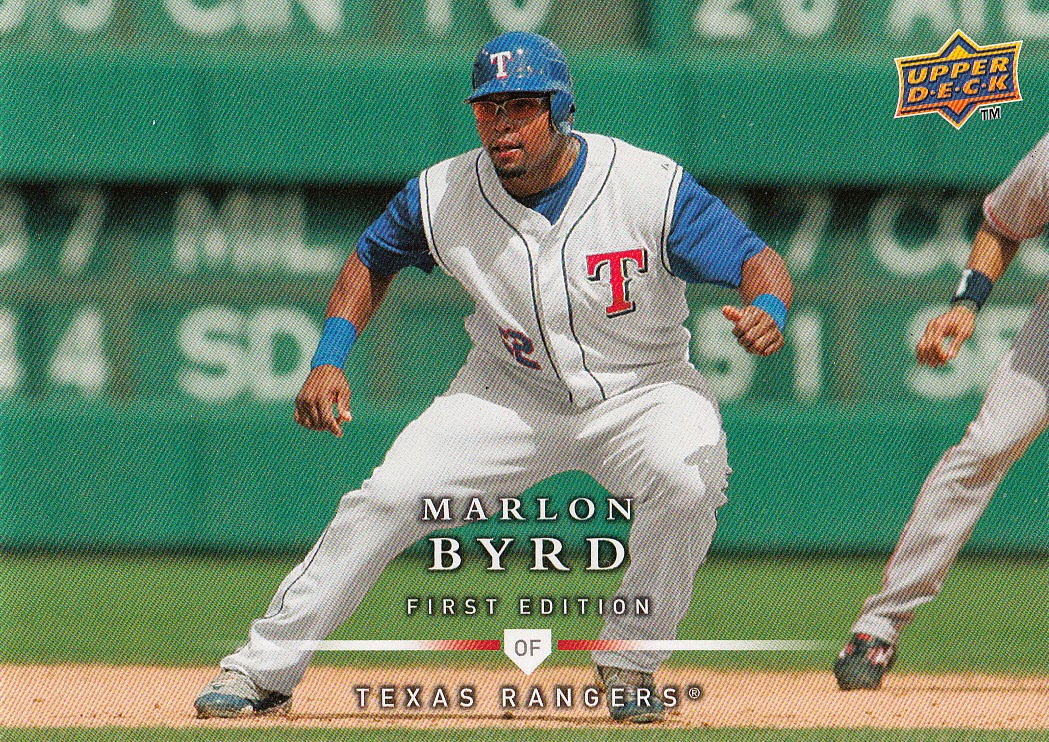 Though he only played two-thirds of a season in Flushing, Marlon Bryd endeared himself to many Mets fans, myself included.  I was hopeful he would return to New York as a FA during the offseason, but Philadelphia bowled him over with their contract offer.  Good for Marlon. 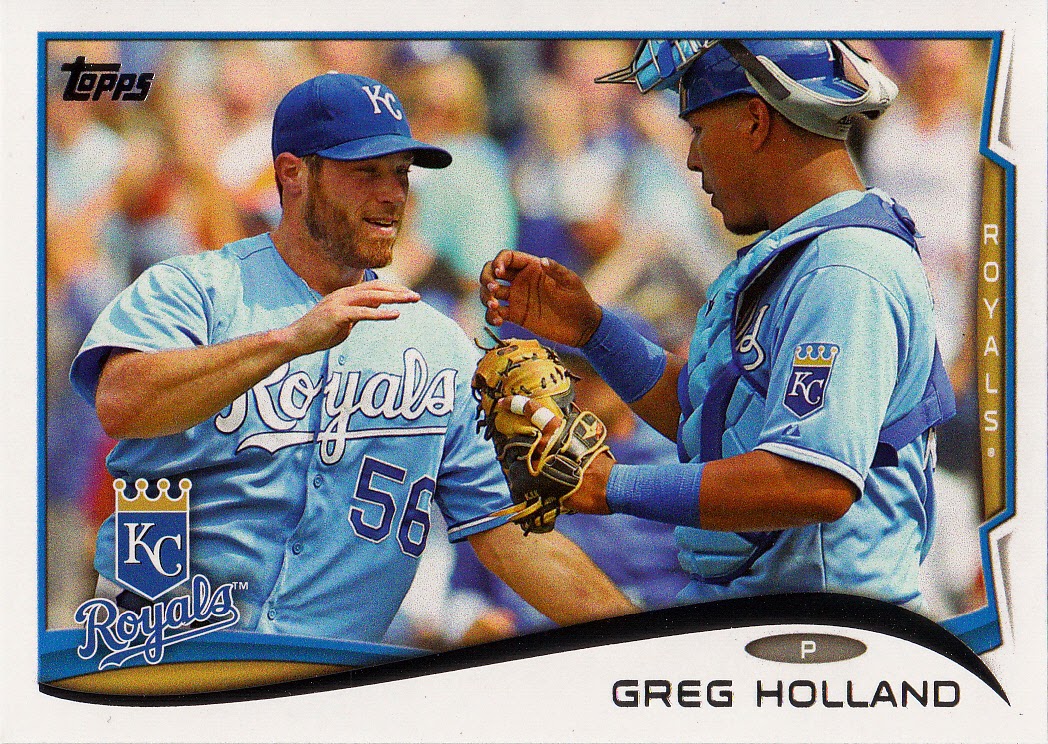 I love those powder blue K.C. tops, and I'm sure the players love 'em, too.  Holland is having a great season for the Royals, and it couldn't happen to a better dude.  He was pitching at Class-A Wilmington one of the seasons I worked there and he was just a genuinely friendly, nice guy.  Naturally, I'm happy for his success. 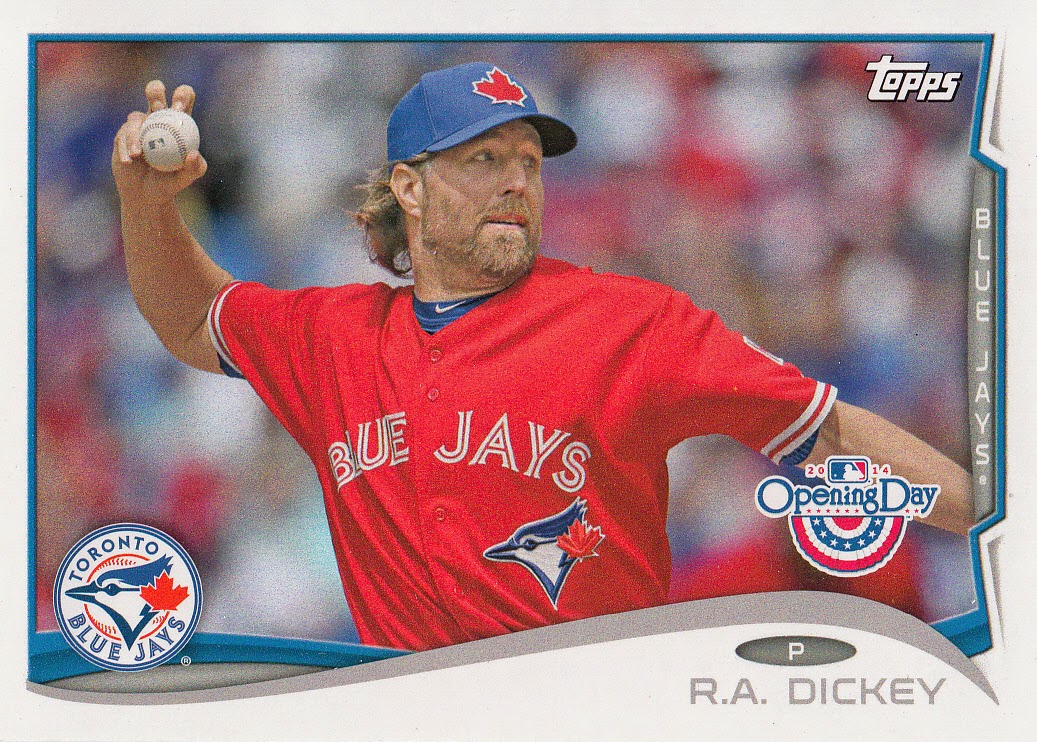 This beaut is heading for the ol' R.A. Dickey collection.  I really dig the red jerseys and the maple leaf cap. 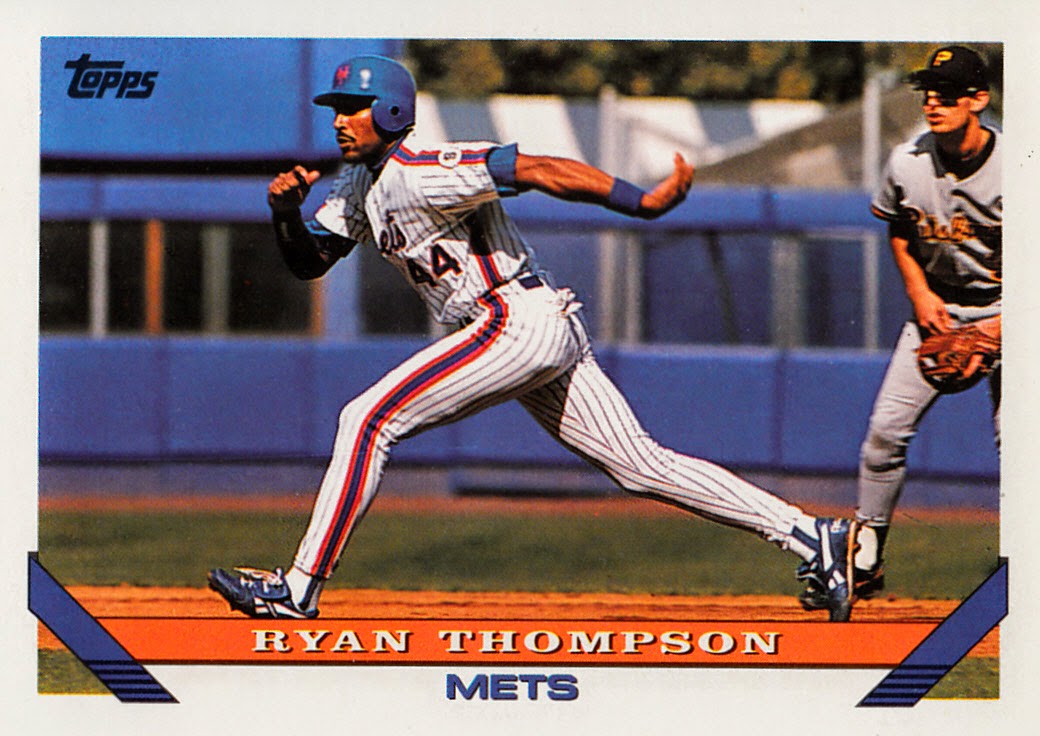 I can cross this sweet Ryan Thompson card off my JustCommons.com want list.  Thompson never fulfilled his immense promise, but he sure had his share of good-looking cards.

And while we're on the topic of Mets cards... 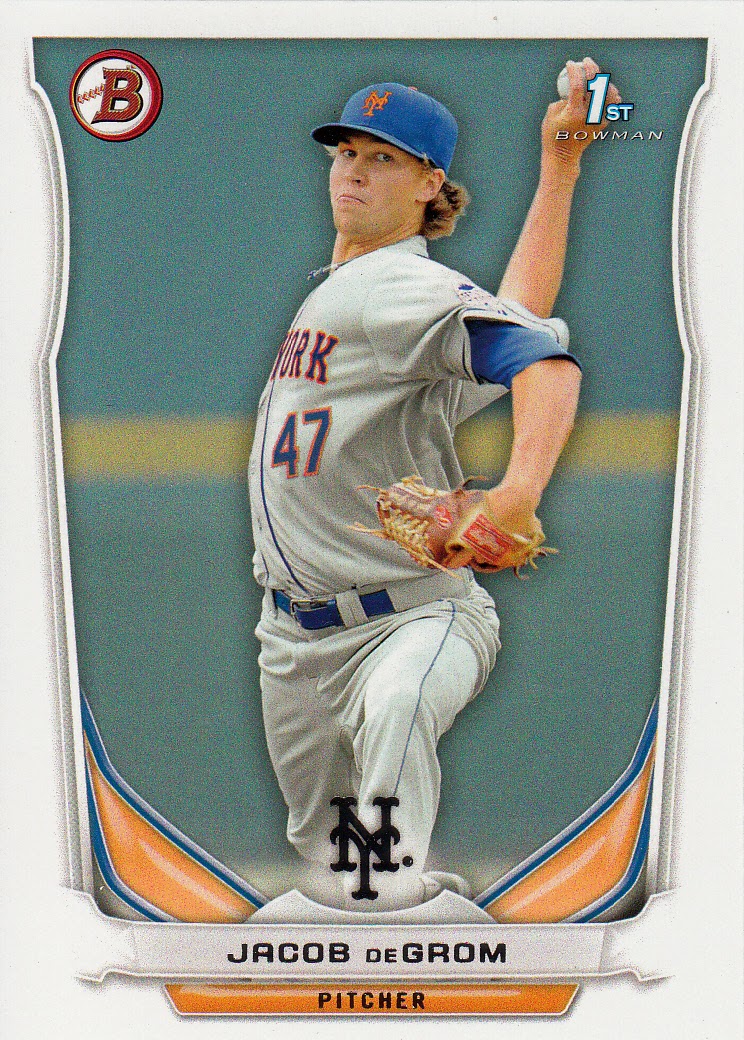 My first card of rookie right-hander Jacob deGrom!  The former 9th-round selection has a deceiving 1-4 mark through his first nine big league starts.  He's pitched way better than the record indicates and, if the Mets had any sort of lineup to support him, deGrom would have at least four wins under his belt.  I'm excited to see what the future holds for this guy. 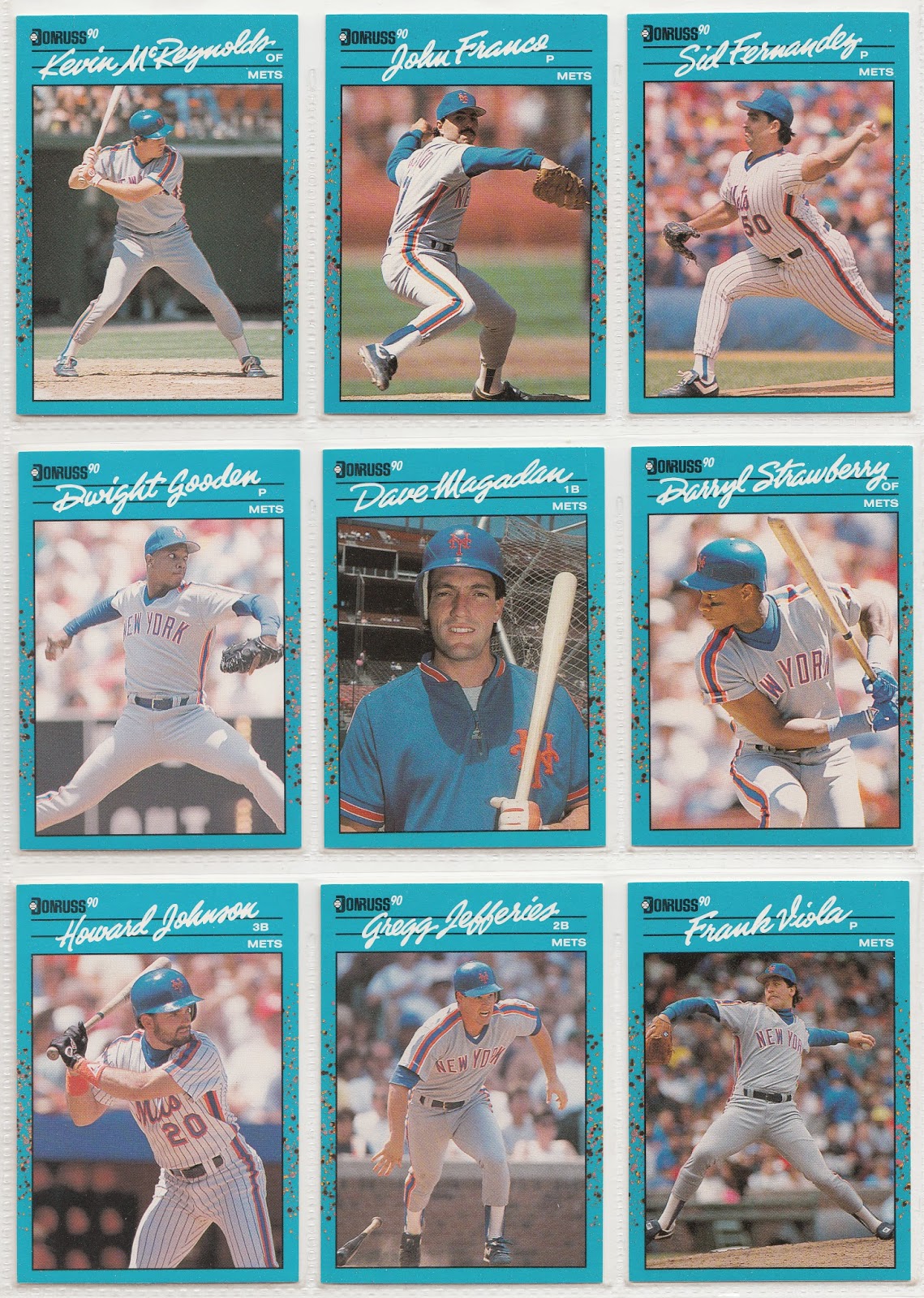 The only thing more enjoyable than looking ahead is looking back.  And these 1990 Donruss NL's Best cards are terrific.  Ya know, if Donruss chose to do the entire '90 flagship in blue rather than blood red, I think we'd all have a much more favorable recollection of it.  Or is that just my bias towards blue and how the Mets players look juxtaposed with a blue border as opposed to red? 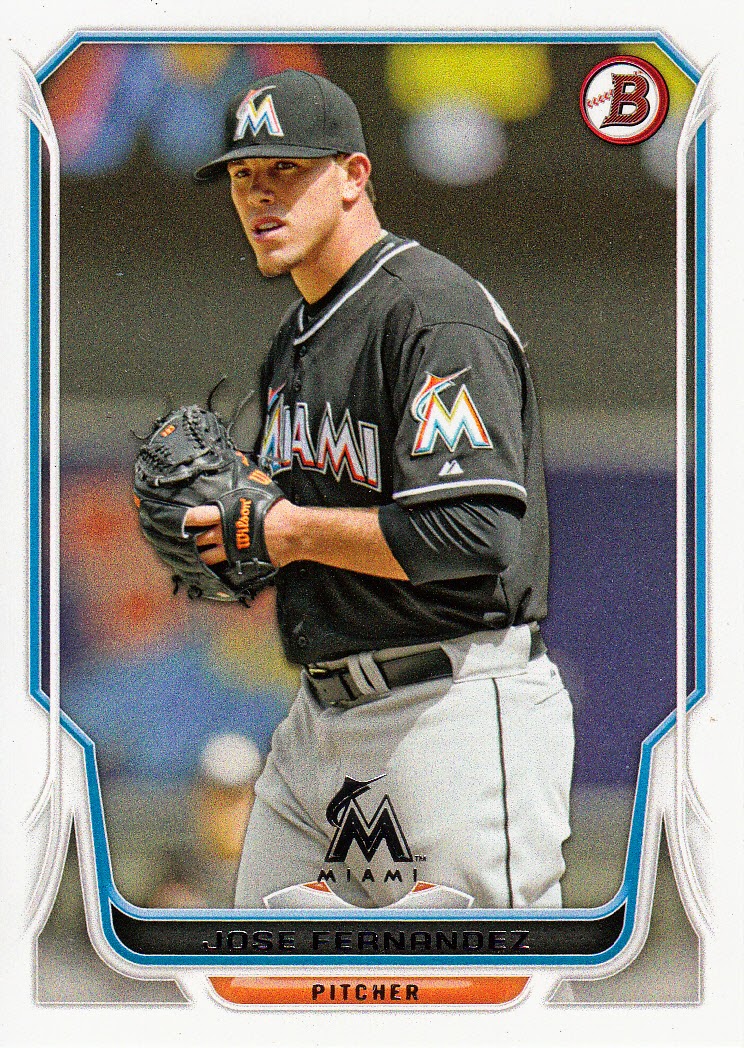 Not a Met, but Jose Fernandez is one of my favorite "new" players to collect.  A nice card with a fresh imagine. Say this about Bowman, at least: the cards aren't normally saddled with the same old recycled images that the rest of the Topps products are.

And, saving the best for last, a pair of 2012 black bordered Heritage parallels! 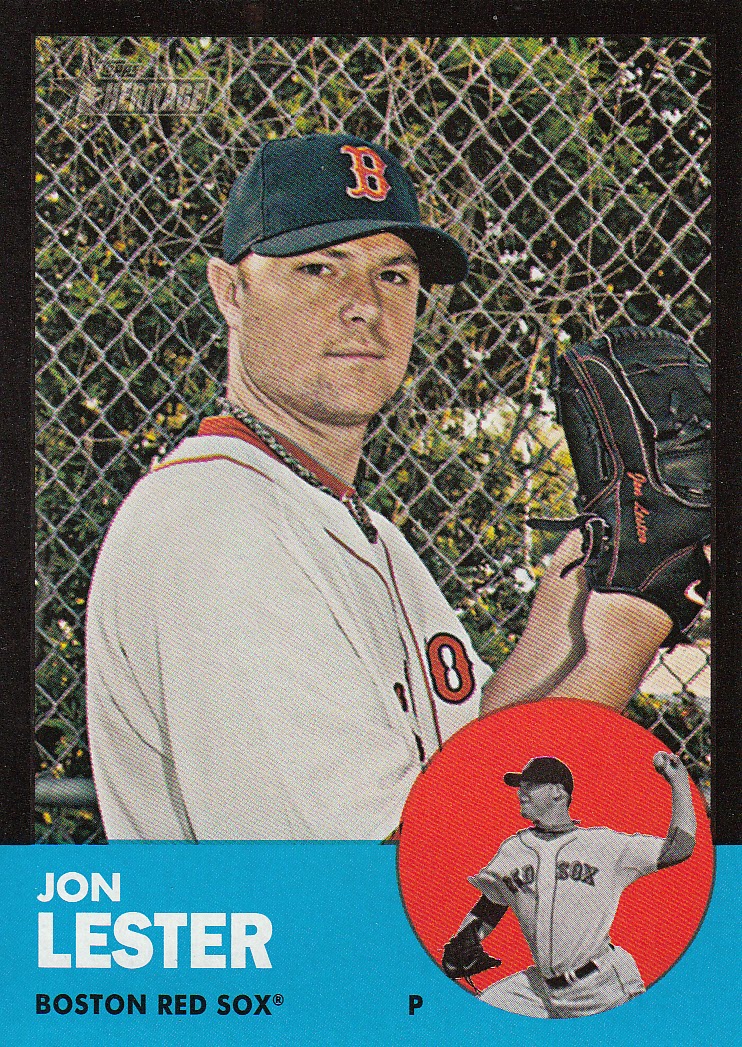 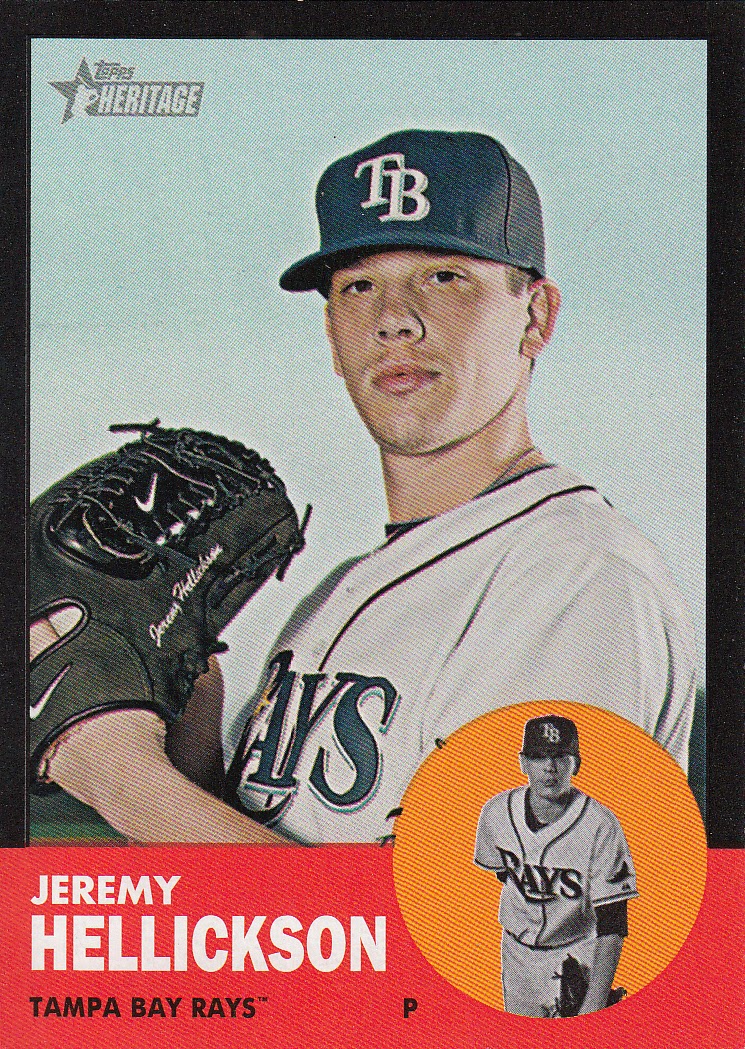 Super excited to get these!  I'm now just two cards shy of putting together four full binder pages of these bad boys.  In other words, I'll have stumbled into 36 of the 100 cards from that year's black variation checklist.  Not too shabby!

Another stellar package from The Backstop.  You da man, Marcus!