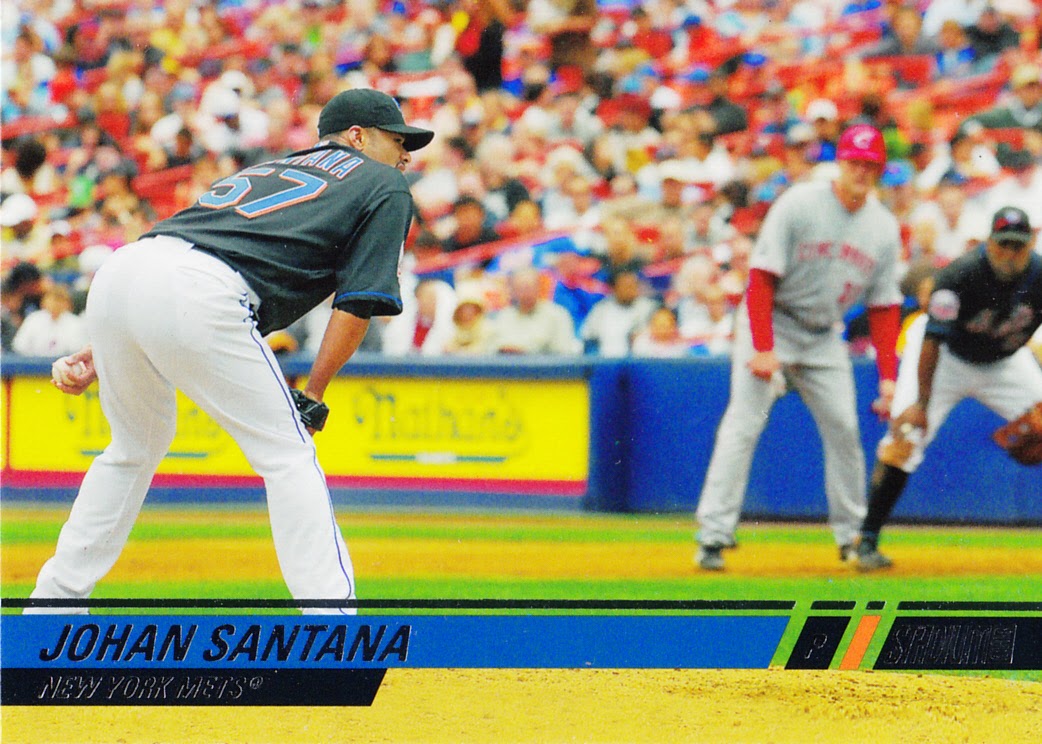 Howdy, friends!  Have you gotten any new Stadium Club?  How about brand spanking new Topps Update, which 'officially' came out today?

Negative on both counts here, as I didn't get a chance to make it out to Target or WalMart for Update either of the past couple days.  I plan to add "2014 Update Hobby Box" to my Christmas list, but I'd still like to pick up a pack or two of the stuff in the meantime just because.  Plus, I'll need a pack to add to young Gabriel's stash of 2014 packs.

In the meantime, my sports card sanity has been kept in order thanks to good hobby Samaritans like Shane, my Zistle buddy over at Shoebox Legends.  He crafted yet another fantastic PWE which included the 2008 Stadium Club gem of Johan Santana you see up top.  It had most definitely been on my wanted list for a good amount of time, and I'm thrilled to add it to my collection! 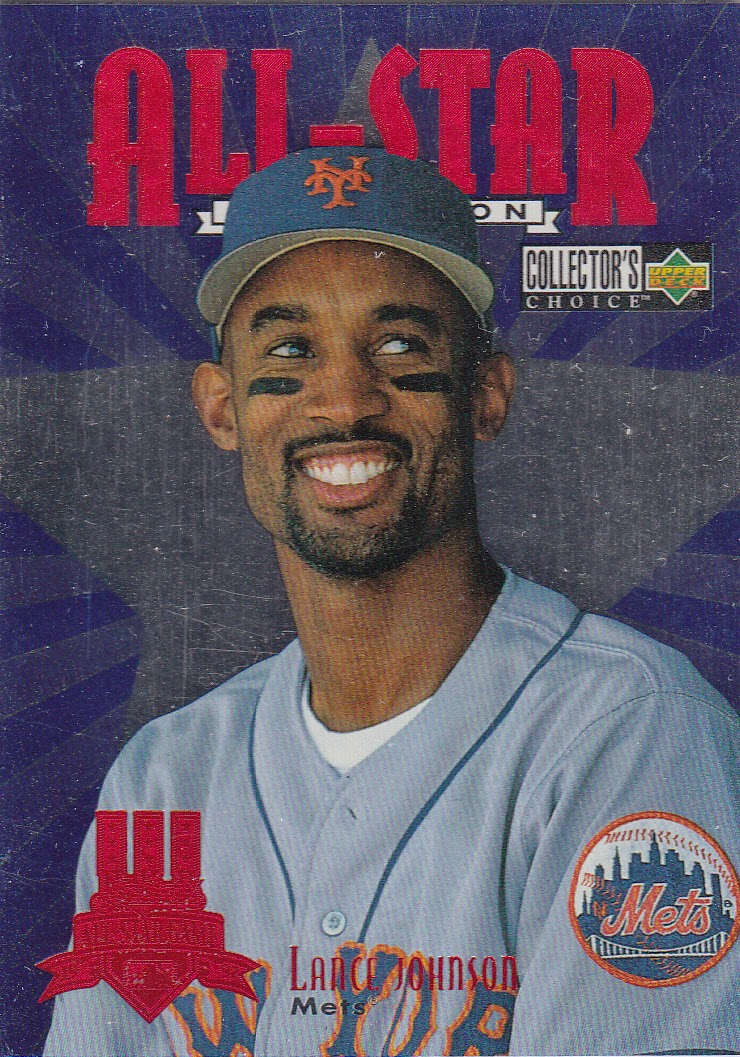 Speaking of being thrilled, this Lance Johnson Collector's Choice All-Star is as good as it gets.  The "One Dog" had an unbelievable '96 season for the Mets, which included a start in that season's Midsummer Classic.  He batted leadoff and went 3-for-4, helping the N.L. to a 6-0 victory at Veteran's Stadium in Philadelphia. 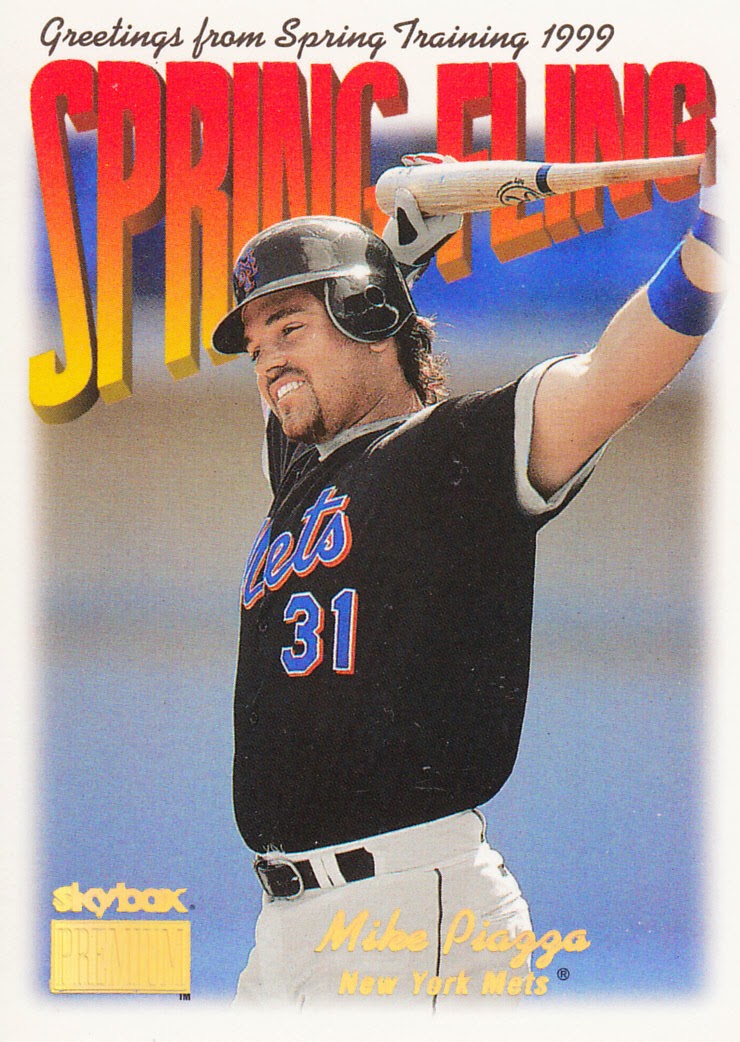 And you know who was the MVP of that '96 All-Star game, right?  None other than Mr. Mike Piazza, then a member of the Dodgers.  The Pennsylvania native went 2-for-3 with a home run and two RBIs. 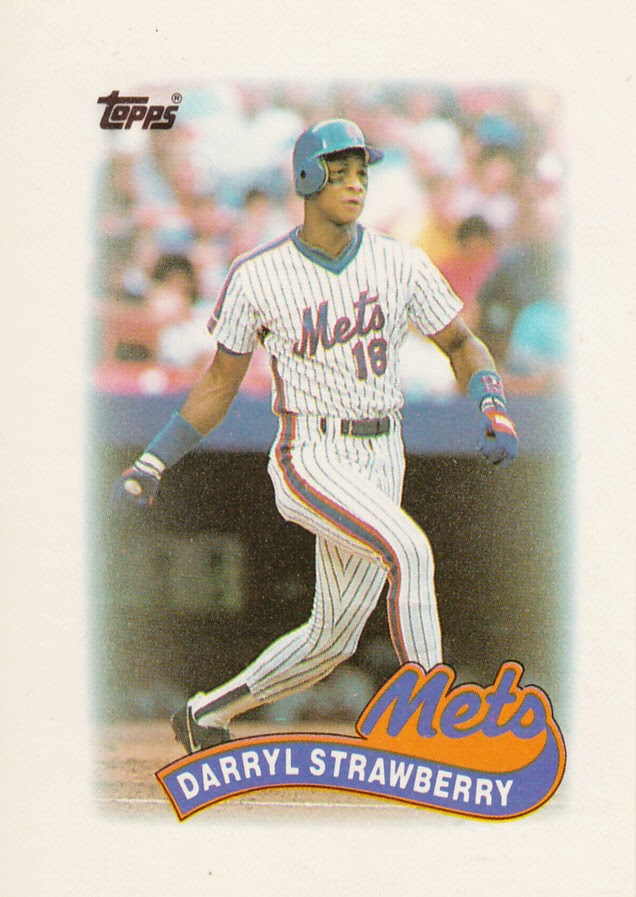 Darryl Strawberry played in his fair share of All-Star Games, as well.  Eight, to be exact.  This is an '89 League Leaders mini of Straw, who led the league in homers (39) and was second in RBIs (101) during the 1988 campaign. 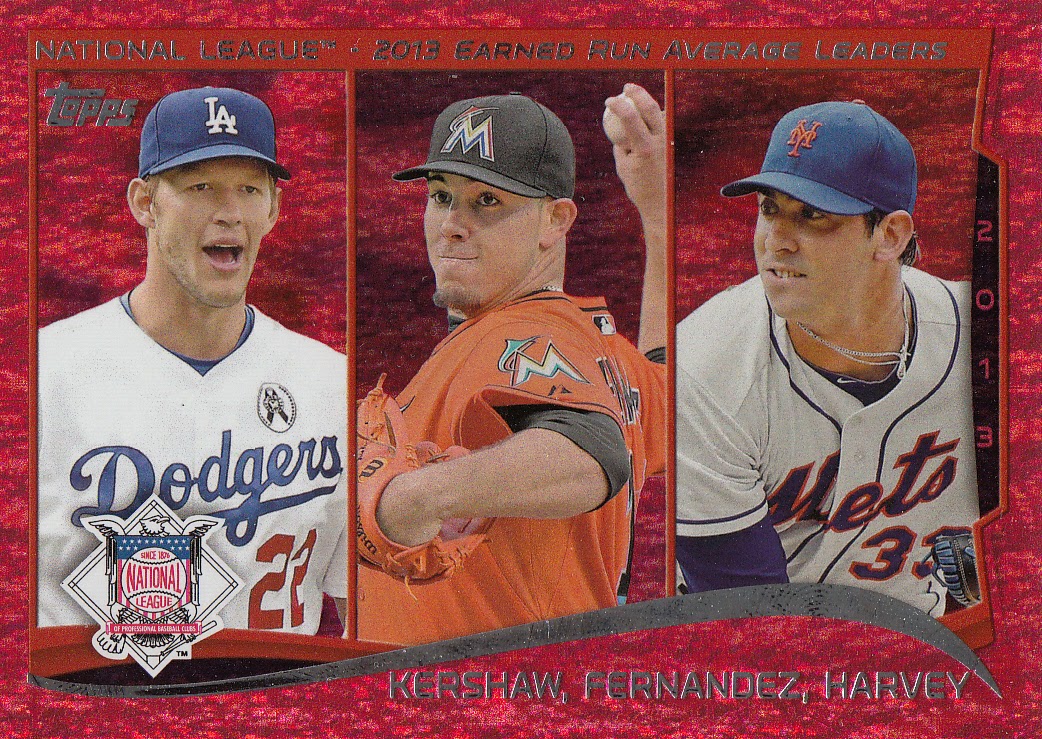 Matt Harvey received quite an honor when he was tabbed to start the 2013 All-Star classic, which happened to be hosted at New York's Citi Field.  The Mets' ace fanned three and allowed one hit over his two innings of work. By the way, this is a pretty badass trio of pitchers featured on the above red hot foil parallel. 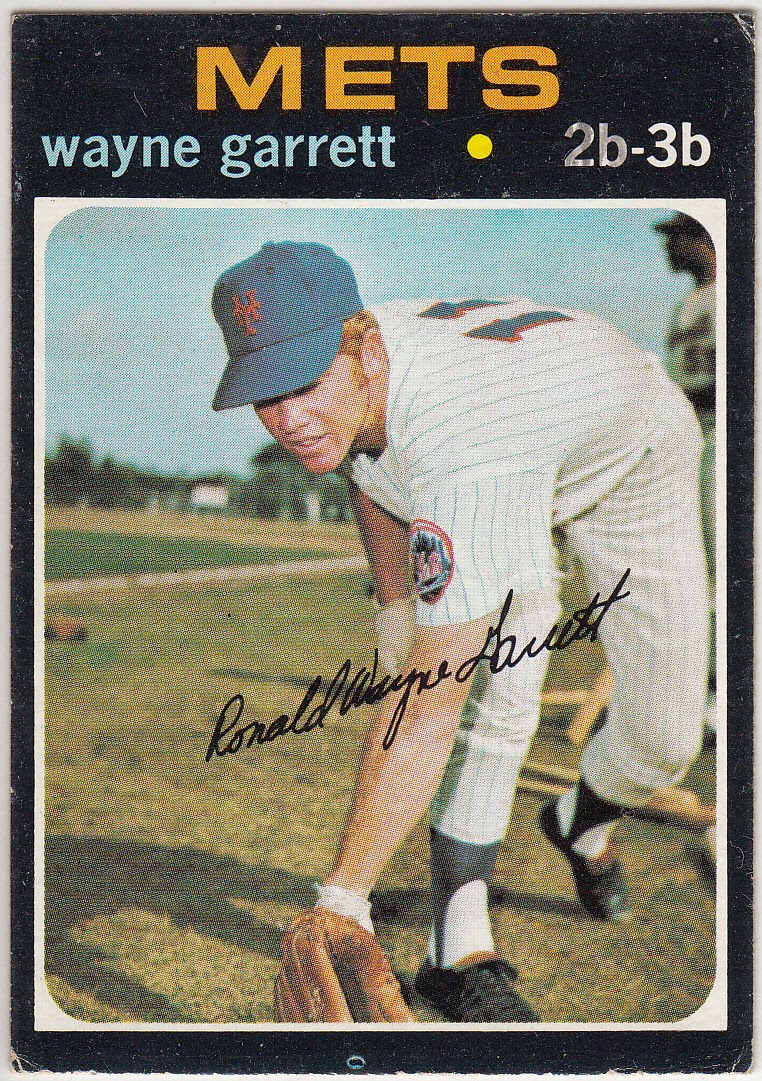 No All-Star appearances for Wayne Garrett over the course of his 10-year big league career.  No matter, this is a great vintage addition to my collection.  And a member of the '69 Miracle Mets to boot.  Great photo on this card and, well, can you really beat '71 Topps? 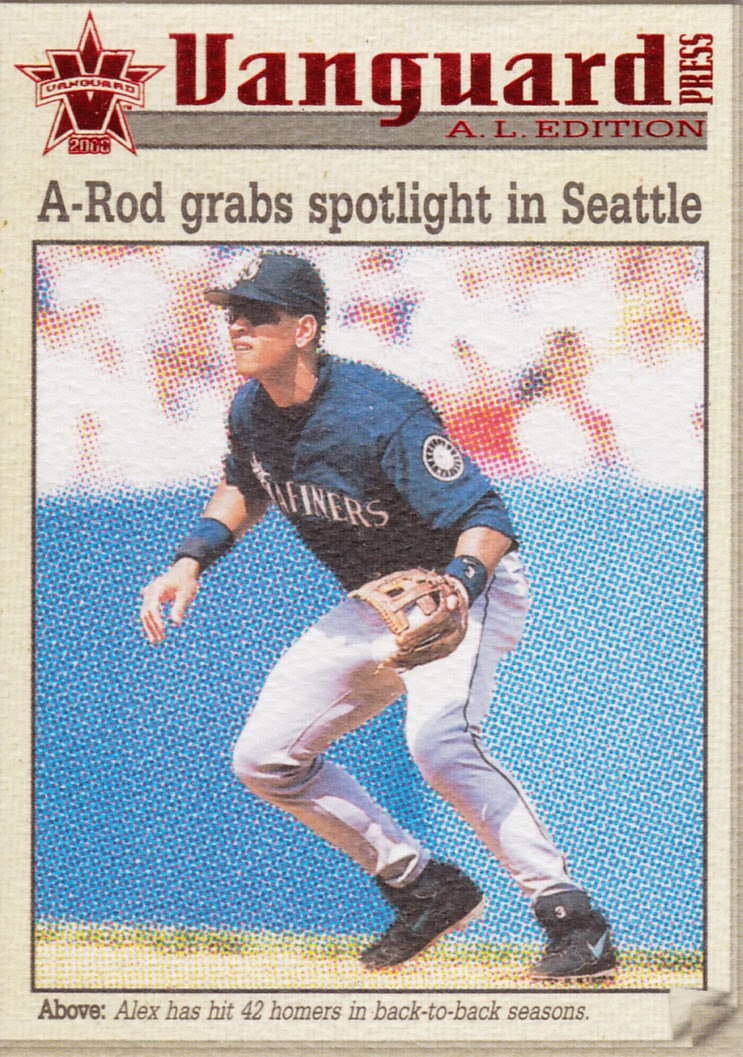 No, not a Met, but A-Rod is still one of my favorite players to collect.  And what you need to know about this card but can't clearly tell from the scan is it's grainy texture and very thin, newsprint-like card stock.  An unusual and interesting twist from a most unique card company like Pacific.

As the title alludes to, it wasn't just baseball in this PWE... 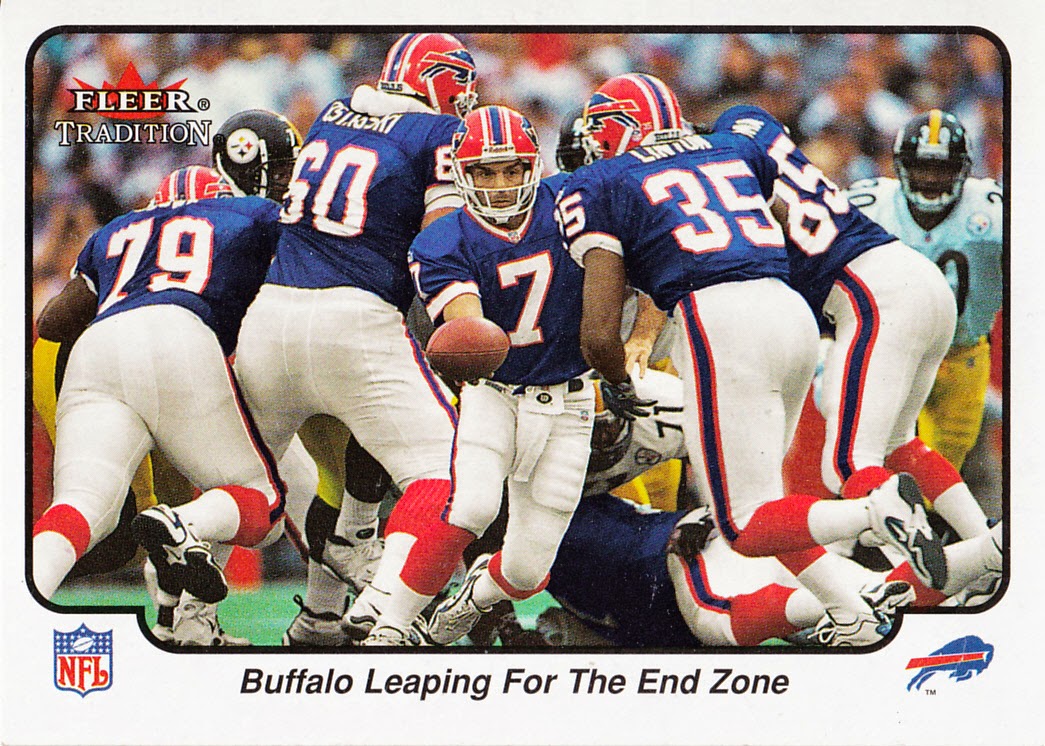 We at the Clubhouse are always excited to receive Buffalo Bills cards!  In my last post I talked about how Doug Flutie was the last Bills quarterback to lead the team to the postseason.  And, coincidentally, here's Mr. Flutie gracing the front of this Fleer Tradition team card from 2000.

Flutie engineered the Bills to 10 wins during the '99 season, yet was unceremoniously stripped of his starting job the week leading up to the Wild Card round.  Call it the 'Curse of Flutie' or whatever, but it's been 14 years since Buffalo's football team has made the postseason.

And the third sport represented in Shane's mailing is one that I know is very dear to him... 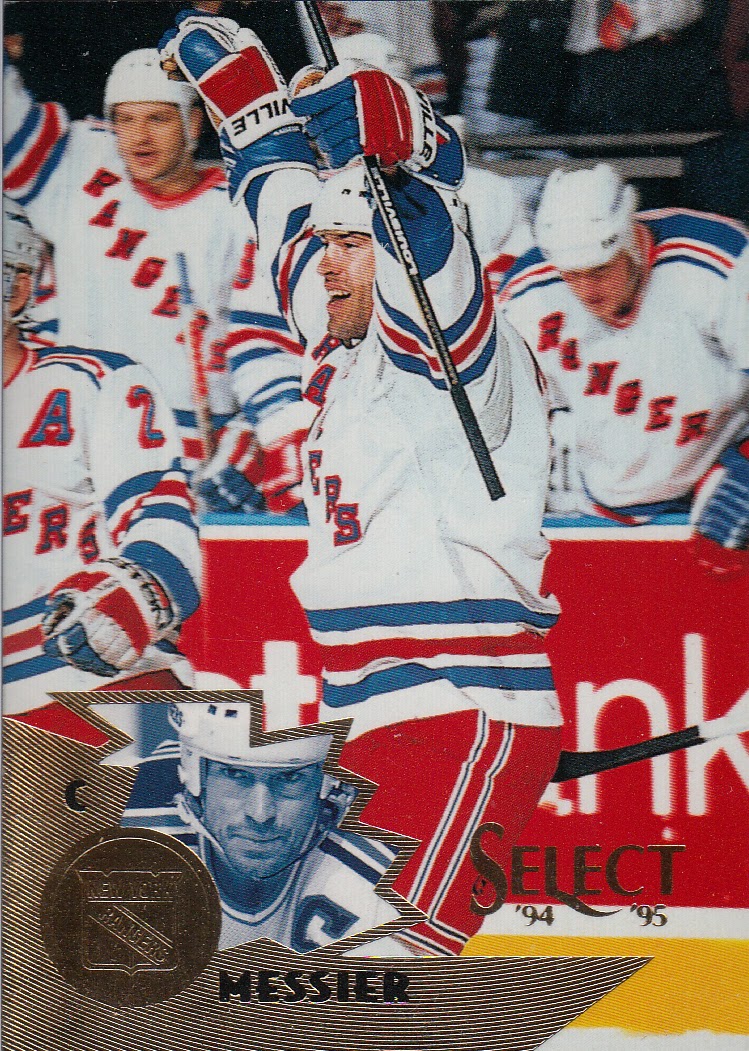 Yessir, hockey is back in full swing.  I don't have a whole lot of hockey cards, but anytime I can get a card of the greatest captain in New York Rangers history, I'm a happy man.  The front of this card is pretty awesome, yet it doesn't hold a candle to the back... 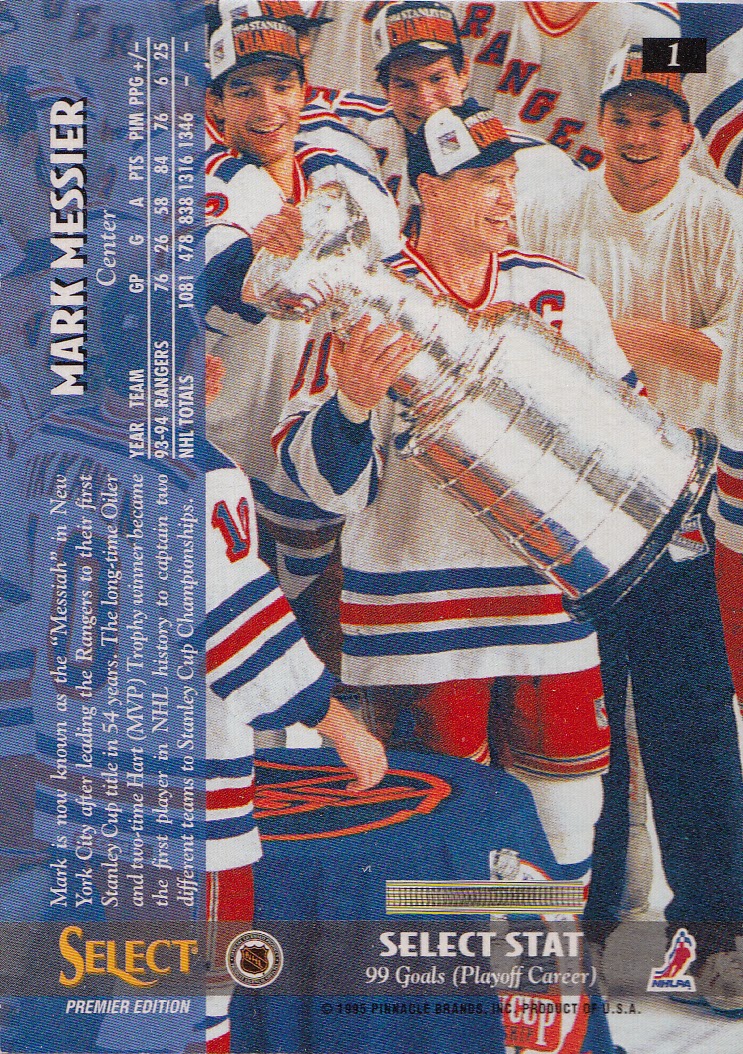 No commentary necessary here, I think.  Just seeing this picture gives me goosebumps.  I was 13 when the Rangers won the Cup and it still ranks as probably the greatest 'sports fan' moment of my life.  [Ed. Note: In case you were curious, I was only six when the Mets won the Series in '86 and don't remember a thing from it, unfortunately.]

Shane, thanks for the cards, as always!  And, more so than that, thanks for rekindling some All-Star memories and even a Stanley Cup moment of greatness.