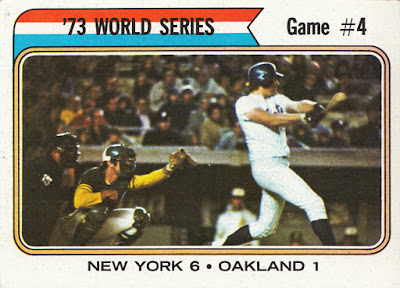 Our good friend from the Great White North was at it again recently.

I'm not sure what Super Traders is or how you sign up or what you have to do, but apparently Douglas from Buck Store Cards had loads of spare Mets from said event and was generous enough to share them with moi.

And, boy oh boy, was the gettin' good!  A little bit of everything that makes my Mets collecting heart go pitter-patter.

For starters, in the lead-off spot is an epic card from the '74 Topps set.  Rusty Staub hammered a first-inning three-run bomb as part of a 4-for-4, 5 RBI performance to propel the Mets to a big win in Game Four of the '73 Fall Classic. 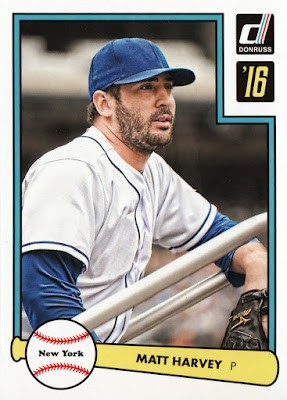 My blogger friends sure do have a knack for providing me with long sought-after cards without even realizing it. These Donruss inserts have either been in my eBay or COMC cart for quite some time now. 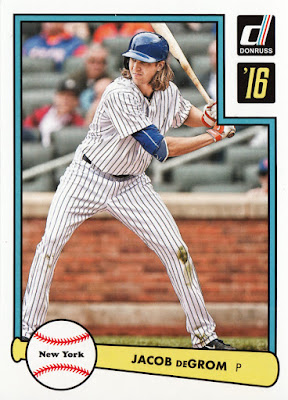 No logos, no team names, no problem on these '82 throwbacks as far as I'm concerned.  And, it doesn't get much better than a pitcher at the plate shot, does it? 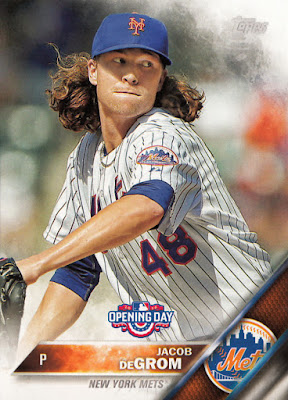 Another one from the shaggy-haired right-hander, this one from Opening Day 2016.  Jacob has yet to find his groove on the young season. 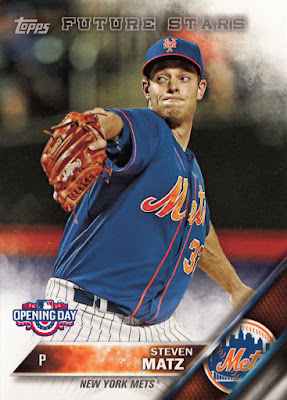 Steven Matz, on the other hand, has been brilliant since a terrible opening start.  He's allowed just 2 ER over his last 19.1 innings with 21 Ks and just 5 BB, notching three wins in the process.  The young southpaw has a bright future! 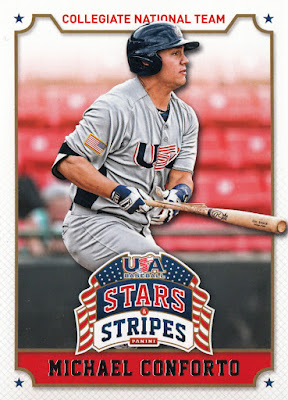 Speaking of futures that are quite bright, Michael Conforto has acquitted himself very well as a middle of the order guy.  He's got such a pretty left-handed swing that produces line drives all over the yard. 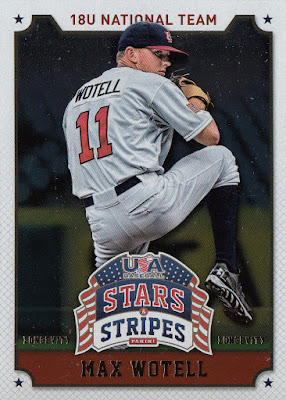 Here's another card from that same 2015 Panini USA Stars & Stripes set.  This is a foil-y Longevity parallel of southpaw Max Wotell who the Mets snagged in the third round of last June's draft.  Straight out of high school, Wotell tossed 10.2 innings for the GCL Mets a year ago.

On the subject of minor leaguers, here are some Bowman prospect cards... 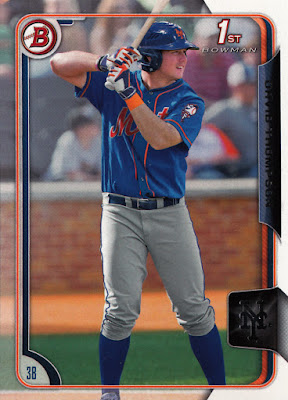 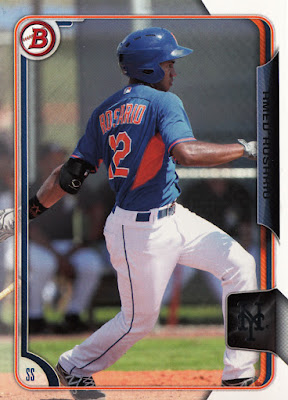 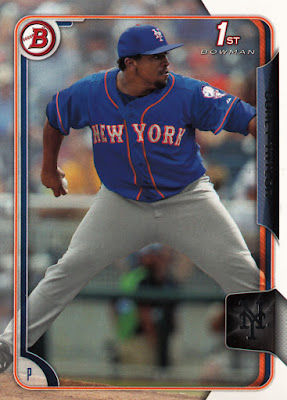 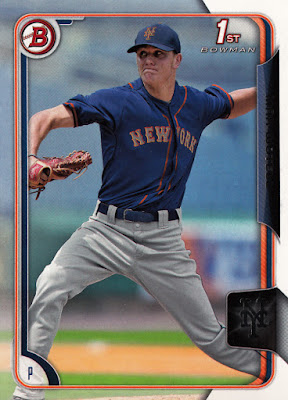 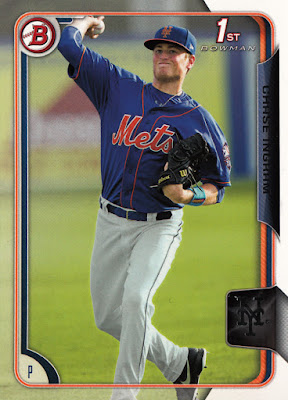 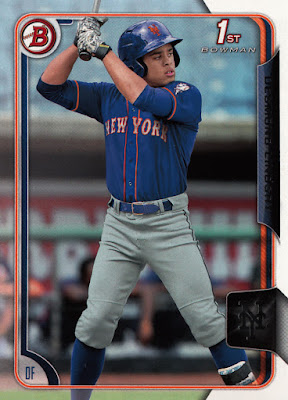 Hopefully more than a few of those guys will be debuting at Citi Field in the not-too-distant future.  But, you just never know, do you?  That's the beauty (and madness) of baseball. 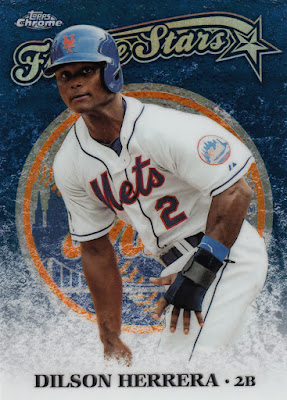 The Mets still have high hopes for Dilson Herrera.  Presently, the native of Columbia is hovering near .280 at Triple-A Las Vegas.  These Chrome Future Stars cards are terrific, by the way!  This is another of those cards I've been scoping out for a while. 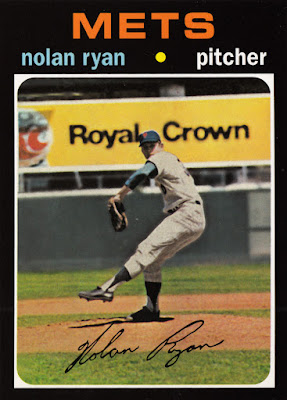 Calm down -- it's just a Berger's Best insert.  The real thing is one of the most iconic Ryan cards in the history of the world.  Some day...some day. 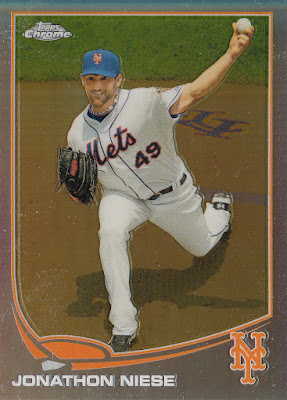 A Chrome refractor of current Pittsburgh lefty Jon Niese.  Despite an unsightly 5.94 ERA, Jon has managed to win three games for the Buccos through six starts.  I always liked Niese, but getting Neil Walker in exchange for him during the off-season has worked out nicely for the Mets. 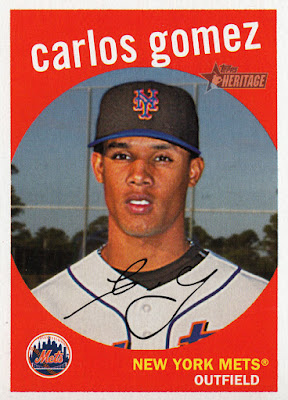 The toolsy Gomez got his start in New York.  He nearly returned to the Big Apple last July in what will forever go down as the most important non-trade in Mets history.  Wilmer Flores will never forget, that's for sure!

Let's finish out the Mets portion of the package with some oddballs, shall we?  We shall! 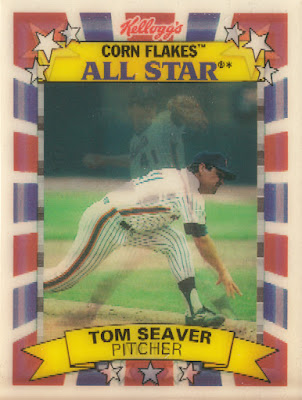 Giants of their respective fields collide as Tom Seaver and Kellogg's Corn Flakes produce this sweet Sportflics card from 1992. 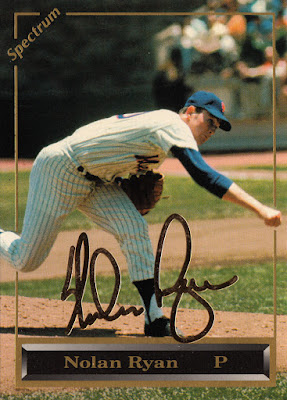 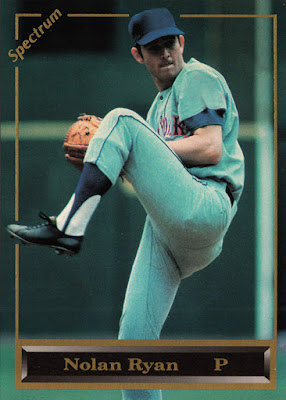 What are these and where did they come from?  Besides being kick-ass oddballs, I really don't know too much about them.  Apparently the Spectrum company produced 5-card and 10-card Ryan retrospective sets in 1993. Both of these are from the 10-card edition.

Oh, one more "Mets" card before we hand it over to some others sports... 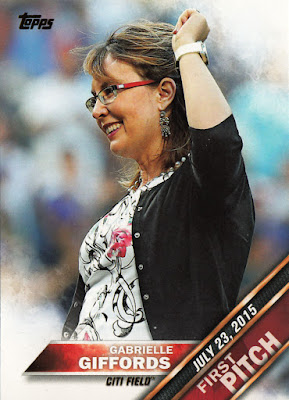 Former Arizona congresswoman Gabby Giffords was senselessly shot by a manic in front of a Tucson supermarket in the winter of 2011.  Four years later, following a long road to recovery, she tossed out the first pitch prior to a Mets/Dodgers tilt at Citi Field.

Okay, onto some hockey... 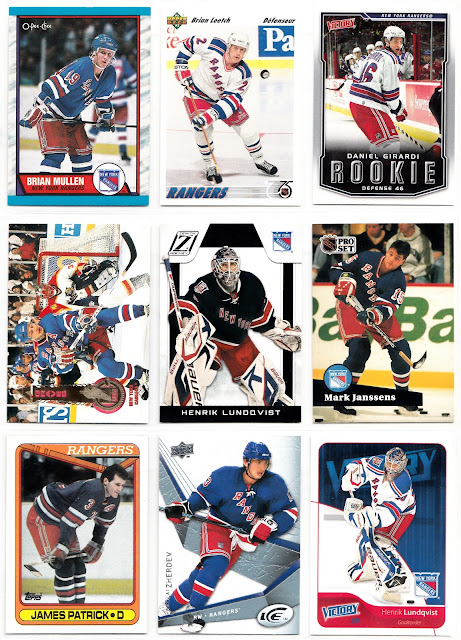 It was a pitiful exit from the playoffs for my Rangers, as they were absolutely destroyed by Pittsburgh in five games.  I was disappointed but certainly not shocked.  They were a flawed club taking on the hottest team in the sport.  Bad combo.  Good cards, though! 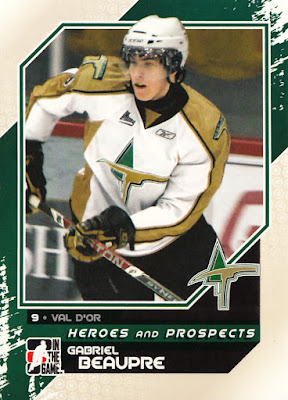 Ah, a new Gabriel for my collection!  At first I was miffed that the card didn't list what team ol' Gabe played for. Then I googled Val d'Or and learned that it's a city in the Quebec province and also the home of the Val d'Or Foreurs of the Quebec Major Junior league.  What does all of that mean?  Beats me, but I like the card a lot! 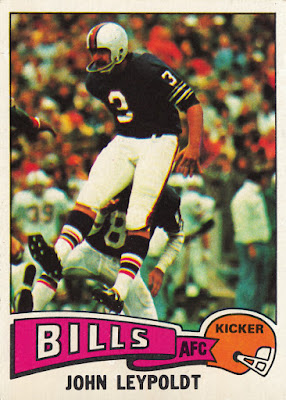 One main reason I refuse to invest time and resources in latter-day football cards is the lack of kickers, punters and offensive linemen.  I mean, it'd be like a baseball card set without catchers and shortstops.  You just can't pick and choose, folks!  This Leypoldt card, by the way, is from the bad-ass 1975 Topps set, one of the coolest sets in football card history.  I guess '75 was a pretty good year for trading cards, yes? 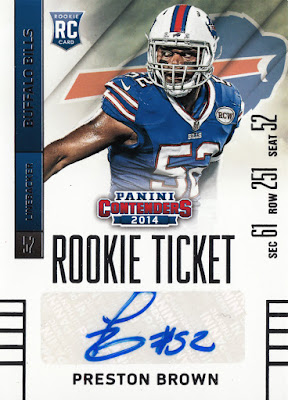 Closing things down with some blue ink here.  Preston Brown had some issues adapting to Rex Ryan's scheme a year ago, but the former Louisville Cardinal is a playmaker who will be relied upon heavily in 2016 especially with Nigel Bradham moving on.  I don't have a ton of football autos, so this is a really neat addition to my Buffalo Bills collection.

Douglas, I can't thank you enough for all the incredibly cool loot!  I know you're probably enjoying your Toronto Raptors this postseason, so may the basketball gods grant them a clean path the NBA Finals.  And, may the bat flips be many for Yoenis Cespedes and Jose Bautista throughout the summer!