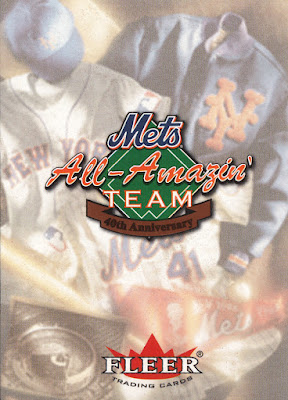 During the 2002 season--in an effort to commemorate the 40th anniversary of the club--the Mets allowed fans to vote on the all-time Mets All-Amazin' team.  Later that season, when the votes were counted, fans had a chance to take a bit of history home with a specially made Fleer card set depicting the peoples' choices.

Alas, I did not attend the game in which these sets were distributed to fans entering the turnstiles, but after enough eBay hunting, I recently found set for a reasonable price.  Originally, a PWE that Nick sent me whetted my appetite for these cards, so I couldn't rest until they were safe and secure in my collection.  So, thanks for that, Nick!

There are 20 cards plus a header/checklist card. 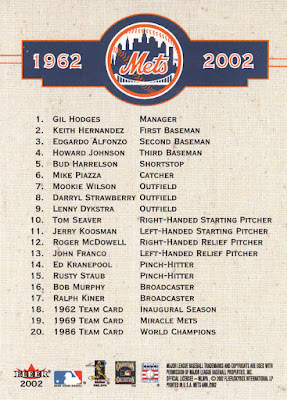 As you can tell from an examination of the checklist, all the familiar names are there.  Keep in mind, this was several seasons before Mets fans would be treated to David Wright, Jose Reyes and Carlos Beltran.  Also, you will see a few special entries towards the end of the checklist, namely the original Mets broadcasters! 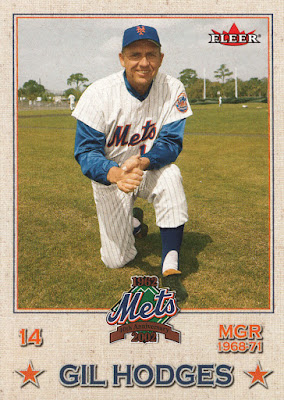 No dispute here in regards to who the 40th Anniversary manager should be.  While Davey Johnson may have set the club records for single-season wins, the feat accomplished by Hodges is shoulder to shoulder with any in sports.  Plus, the guy is a NYC baseball icon. 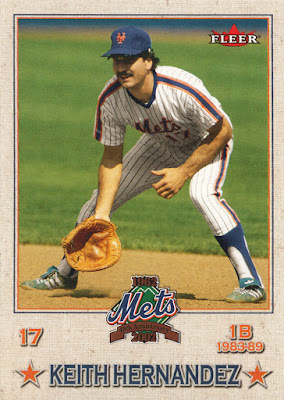 A no-brainer here.  Keith was a wizard with the glove and steady as a rock at the dish.  He was the first officially designated 'captain' in franchise history, to boot. 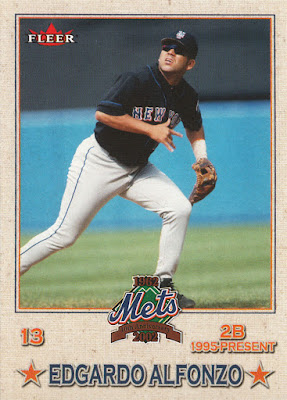 Fonzie's great seasons may not have been many, but the few that he had were downright awesome.  Only four other players in club annals scored more runs than Alfonzo did in a Mets uniform. 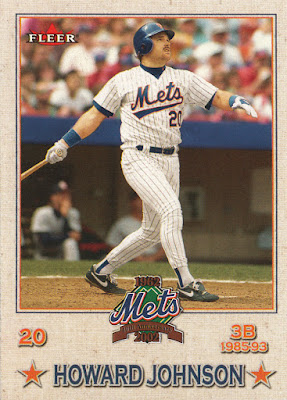 HoJo was one of my heroes growing up.  A switch-hitter, he was a 30-30 guy three times during his Mets tenure. 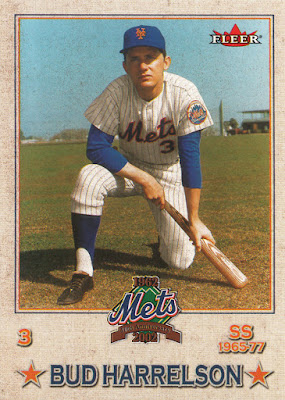 A fan favorite, Buddy was a player, coach and manager for the club.  He's the only person in Mets history to be a part of both World Series championship squads--in '69 as a player and ''86 as a coach. 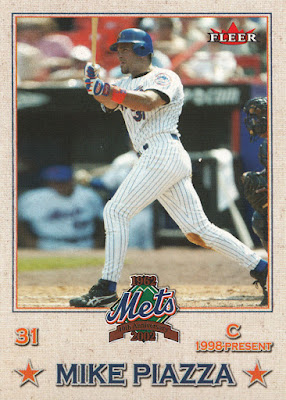 With apologies to the great Gary Carter, Piazza was a must for the All-Amazin' team.  Along with Seaver, Gooden and Straw, he's on the Mount Rushmore of Mets rock stars. 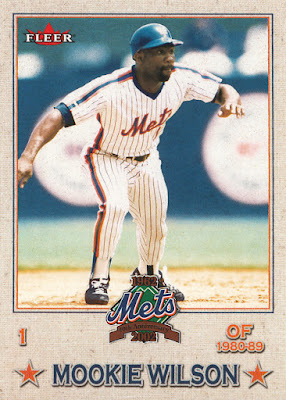 May seem like more of a sentimental pick based on one (in)famous ground ball, but Mookie was a very good player for a long time for the Mets.  His 281 steals are second only to Jose Reyes in the team record book. 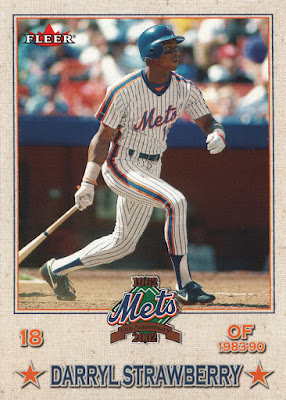 Even when they won the Series in '69 and the pennant in '73, the Mets were a team of big-name pitchers with some handy offensive cogs.  Strawberry represented the franchise's first great home-grown offensive player.  His 252 home runs are most in Mets history. 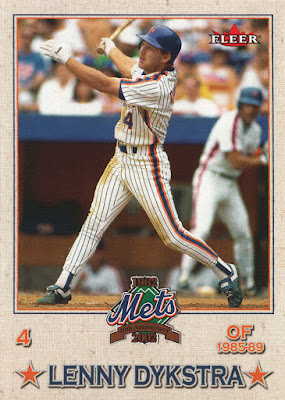 "Nails" was a catalyst for the potent offenses of the glory-era Mets teams of the '80s.  And he was a 'money' player.  In three postseason series as a Met, Lenny clouted four homers with nine RBIs and 13 runs scored. 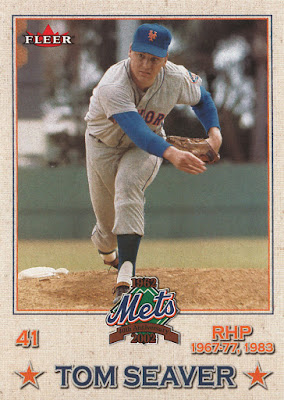 Still the greatest player to ever pull on a New York Mets jersey.  End of story. 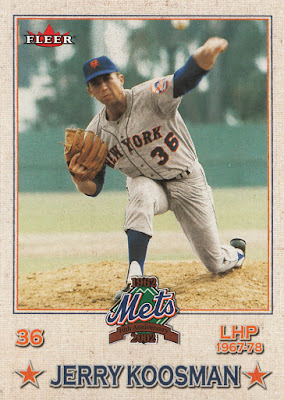 It's not fair to say a pitcher as good as Koosman played second fiddle on the Mets staff, but that's just how immortal Tom Terrific was.  Kooz won 140 games for New York, trailing only Seaver and Gooden on the club's all-time wins list. 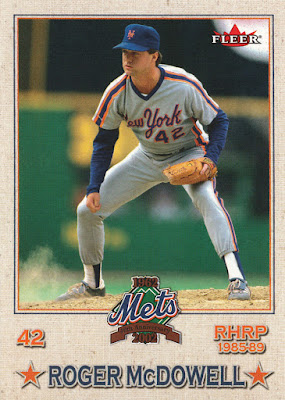 Perhaps more remembered for being a world-class prankster, Roger compiled 33 wins and 84 saves during his four-plus seasons as a Met. 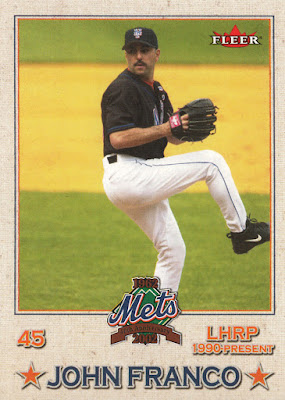 A slam-dunk choice here.  Franco spent 14 of his 21 major league seasons in his home town of New York.  No Mets pitcher nailed down more saves than John's 276.  And it's not even close. 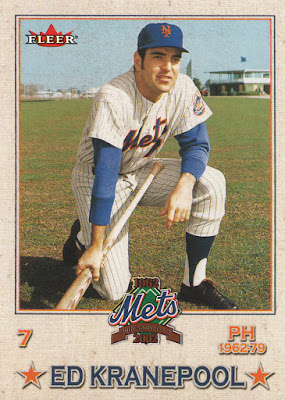 The original Mr. Met.  I think it's safe to say that no person--living or unborn--will surpass Kranepool's 1,853 games played as a New York Met.  On top of that, Ed set a major league record in 1974 with a .486 clip as a pinch-hitter. 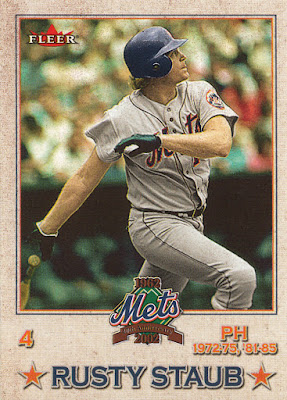 A legit superstar earlier in his career, Rusty established himself as a premier pinch-hitter during his second go-round in Flushing.  He set a club record with 24 pinch-hits in 1983. 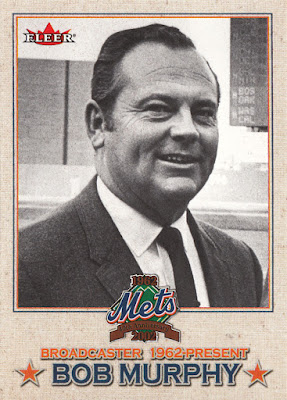 The man who brought we Mets fans so many "Happy Recaps" throughout the years, Murph was an original broadcasting voice of the club in 1962 through his retirement in 2003.  A real radio legend in my books! 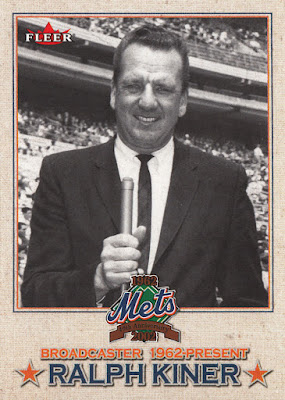 Ralphie-baby was also an original member of the New York broadcasting booth.  Certainly never the smoothest or most articulate, Kiner was nonetheless a fan favorite.  His Kiner's Korner show would have been daily Deadspin material had the two eras overlapped. 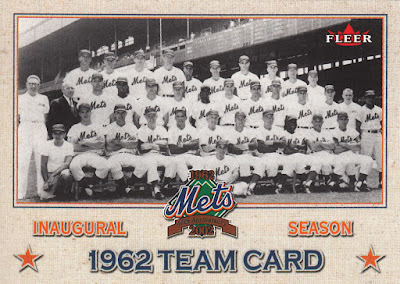 The original expansion Mets from '62.  They sure were Amazin! 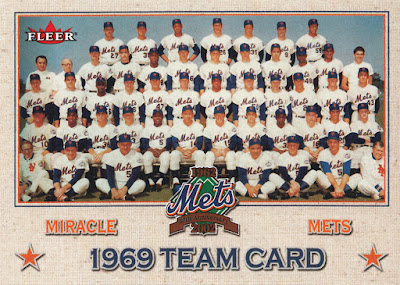 The Miracle Mets were only bettered by the moon landing in '69.  Or, were they? 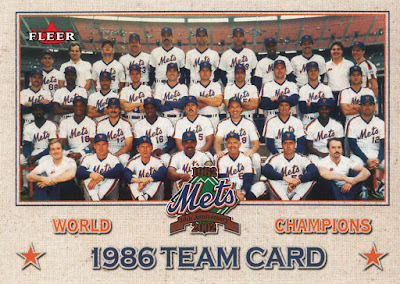 The '86 team is the franchise's standard bearer for wins in a season with 108.  It's crazy to think that they were so dominant for six months, yet required a minor miracle to secure the championship.

I'm certainly glad I made the investment here.  Fleer did a wonderful job with the set, as the cards all look great.  Plus, where else are you gonna get a Bob Murphy card??