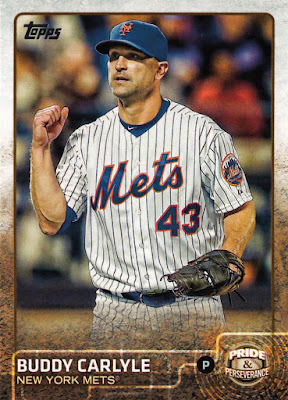 My local card shop doesn't have the most sterling 'discount box,' among other things.  I shouldn't complain, since the place is literally is a five minute drive from my house.  And, I do understand that some collectors don't have a LCS within a hour's drive of them.  So, on that front, I'm fortunate.

But, if I must complain, the so-called discount box (50 cents per card) is nothing more than a single monster box filled with the mostly-common remains of past box breaks.  Which, doesn't sound so bad, except that most of those breaks were done over a year ago and the contents are too infrequently replenished.  I've picked that thing bare over time and have occasionally found some hidden gems in there, such as low-numbered parallels and short prints, etc.  But, in spite of my hopes, it very rarely offers me anything new and exciting upon my visits to the shop.

However, to my pleasant surprise, I plucked this Buddy Carlyle card from the box a week or so ago.  I've been trying (unsuccessfully, I might add) to trade for it on Zistle for a while now, so I was more than happy to plunk down half a buck to secure a copy.

Carlyle made last year's "Pride and Perseverance" insert checklist due to the fact that he's a Type 2 diabetic. The journeyman righty spent parts of the 2014 and '15 seasons in Queens and, to my knowledge, this is the only card of him produced as a Met.  So, of course, I had to have it!