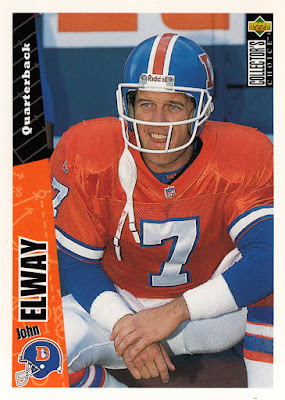 I might as well give you my two-cents on the Super Bowl.  Well, if I waited for someone to ask, I'd be silent forever.

Two-time Super Bowl champ John Elway is the honorary cardboard captain for the AFC Champion Broncos. Can you believe that Denver will be representing the conference for the eighth time?  Elway was front and center for five of those Super Bowl trips.  His first three weren't pretty.  But, I'm of the opinion that it's better to make the big game and stink it up than to not make it at all.  Then again, I'm a Buffalo Bills fan, so I might be the wrong person to ask!

Representing the NFC Champs--the 17-1 Carolina Panthers--is the man who lined up under center for Carolina's only other conference champion.  Jake Delhomme and the Panthers fought Tom Brady's Patriots tooth and nail in Super Bowl XXXVIII, but ultimately fell 32-29.  If you recall, Delhomme played a hell of a game for the Cats, eclipsing 300+ yards passing and tossing three scores.  But, you probably only remember Janet Jackson's wardrobe malfunction during halftime.  And, that's O.K.

Now, for the moment of truth: my prediction for the big game!

The Panthers are this year's team of destiny.  They are the more complete team than Denver.  They've barely broken a sweat in the postseason.  They have the league's MVP.  They should win the Super Bowl.

Denver's season was at times rocky, but their elite defense kept them on top.  They sneaked past the Patriots by a whisker in the AFC title game. The legendary Peyton Manning had his worst statistical season yet and looks mostly used up.  Denver fans are hoping for the fairy tale ending with Manning going out on top.

While it would be a great story--and a pretty decent upset--for Manning and the Broncos to take the Lombardi Trophy, I'm just not seeing it.  Moreover, I'm concerned that we could witness a playback of the Denver/Seattle Super Bowl from a couple years ago.  In other words, an utter ambush.  With any luck, I won't be flipping over to Ancient Aliens by the second half.  I want a good game with lots of drama.  But...