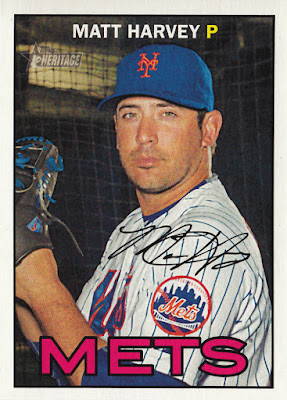 Harvey Days have been few and far between on this young season.  Sure, Harvey has toed the rubber seven times thus far, but Harvey Day isn't simply just a day in which Matt Harvey pitches.  Rather, a true Harvey Day is one of those electric events that is both captivating and awe-inspiring.  It's toe-curling baseball that leaves an impression.

More often than not, Harvey Days have been silent and gray in 2016.  Or, as depressing as a really good Morrissey song, if you will.

But on Sunday, the former Tar Heel rung up 10 Ks over six innings in San Diego, picking up his third win of the season in the process.  It was his first double-digit strikeout effort of 2016 and hopefully a springboard to more consistent outings moving forward.

Dare I say, it was a Harvey-esque kind of day.

I had my own Harvey Day of sorts not too long ago, picking up three Harveys for my collection via eBay. Included was the 2016 Heritage SP you see in the lead-off spot.  This one will go towards my set-build of '16 Heritage instead of my Mets collection.  This is always a gut-wrenching call, but I have to remain consistent. 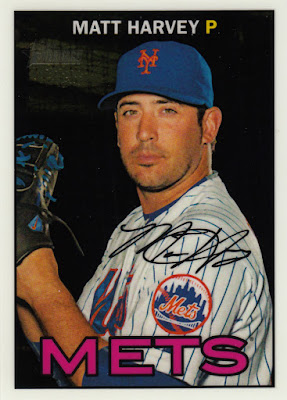 Card No. 2 of the trio is the chrome parallel of the above card.  Now, this one goes to the ol' Mets collection, as I'm not putting together a chrome set.  I'd sooner run into traffic than attempt something like that.  It's mad enough trying to amass the regular 500-card set. And the final third of the puzzle is one of those retail-only Stand-Ups.  Don't look directly into Matt's eyes.  I don't know what's going on there, but it's best not to investigate too closely.  Next thing you know, you'll be naked on a bear-skin rug in a Trump Tower suite feeding each other grapes.

A $5 Buy It Now with free shipping brought these home.  Given what the freakin' SPs go for by themselves, I thought that was a pretty reasonable bundle price for all three of these.

Happy Harvey Day to you and yours!