The National: The Recap 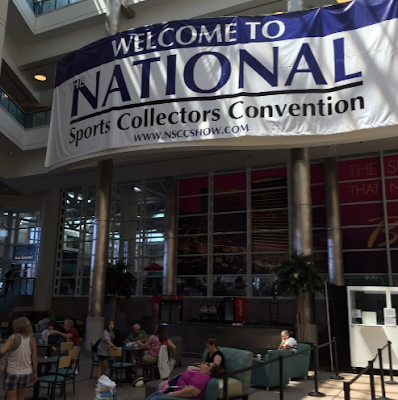 Let me be very clear:  The National Sports Collectors Convention is bad ass!

After spending nearly the entire day at the Atlantic City Convention Center on Friday, I can state the above with unqualified certainty.  Furthermore, I feel like a total tool for even having any hangups about going.  What was I thinking?!

Anyhow, I don't have to deal with any wouldas, couldas or shouldas, because I rolled into the National at 10 a.m. Friday morning and re-emerged into the sunlight of the Jersey Shore just shy of 5 p.m.  I was tired and bleary-eyed by the end of the day but, truth be told, I was jonesing for more the next day!  Alas, my schedule and budget allowed for but one day.

But what a great day it was! 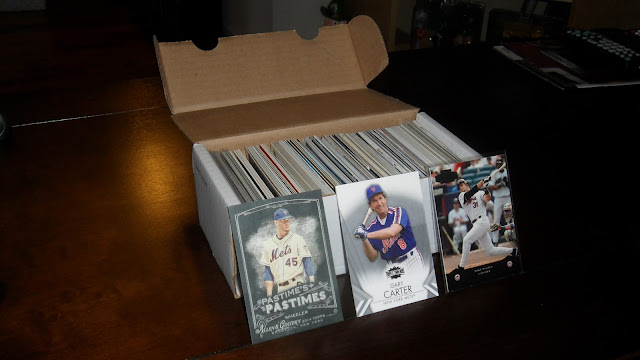 My primary goal at the National was to track down as many Mets cards as I could for as cheaply as I could.  I still haven't had a chance to process and scan everything, but I believe I netted around 250 new Mets for my collection.  Upon consulting my Zistle library post-show, I think I may have grabbed about a dozen cards that I already own.  But, that ain't too shabby for going on nothing but memory.  AKA, no lists for this guy!  (Stupid, I know.)

Any of the main baseball card species you can imagine, I found.  That includes, but isn't limited to:

I exclusively stuck to dime boxes (save for a couple of vintage boxes priced at a quarter or a buck per card), and I didn't have to look too hard to find 'em.  So, if that's your thing and you have a chance to attend the National in the future, JUST DO IT!!

Once I have a chance to scan my singles I'll share some of my favorite finds.  In the meantime, here are a couple other neat oddities that I was able to track down during my hunt... 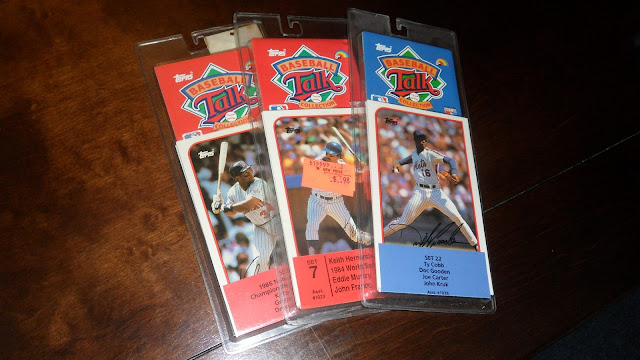 The PR leg of the National pumps out the narrative, "If you can't find it here, it doesn't exist."  Which sounds like a lot of lip service.  Then again, when you find packs of 1989 Topps Baseball Talk, you tend to buy into stated narrative.

At one vendor's booth, there were a few rather large stacks of these Baseball Talk packages, each of which contains four cards.  They were two bucks a pop, but I got a 3-for-$5 special on these.  The players are labeled on the outside of the package, which is nice when you're hunting for a particular team or player.

I wanted to go crazy and pick up a lot of these packs, but it was very early in the show when I found them and I didn't want to burn through my funds so soon.  I settled for packs that contained Doc Gooden, Keith Hernandez, Gregg Jefferies and an '86 World Series card.

[Ed. Note: My lone show regret; I should've returned to this booth at the end of the day and bought more packs. When the hell am I gonna find these again??  Live and learn, I suppose.] 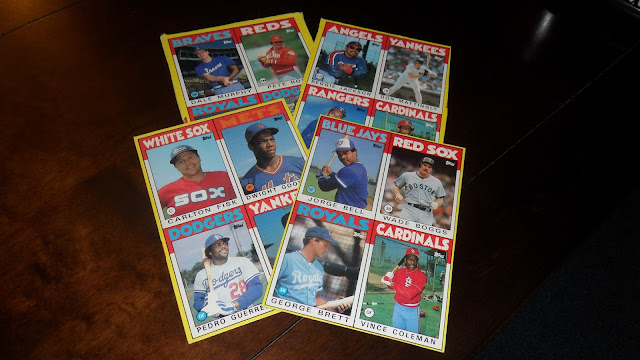 As I've stated on the blog numerous times before, I'm a sucker for wax box bottoms (or panels, if you like).  To my delight, I was able to find all four 1986 Topps panels for just 50-cents a pop.  Joy!

All the panels all in very good shape and I plan to cut 'em into their individual cards and add them to my '86 Topps binder which already contains the complete set and complete traded set.  In essence, the wax box cards will be a nice cherry on top for that year.

All in all, I wound up spending less than I had budgeted for myself.  That's not a terrible thing, considering I still found a lot of great stuff and had a terrific time.  I could have easily spent up to my budget and most likely nuked it, but...

As many others have stated, the only drawback surrounding the show is managing your time -- especially if you're just there for one day.  After five hours I was barely a quarter of the way through convention center!

Anyhow, that's my tale of the National.  A truly awesome experience!  I'm hoping it'll be back in my neck of the woods -- either A.C. or Baltimore -- before too long.

And, next time around, there won't be any silly debates about attending, I can guarantee you that!