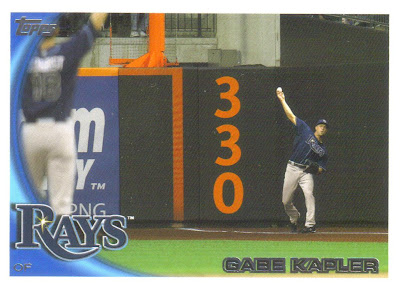 This was the year I decided to make the Topps factory baseball set a staple of my Christmas wish list.  It was also the year the Topps Update series became a collecting necessity, as I bought a hand-collated set off eBay shortly after Christmas had come and gone.

I'm not sure what caused me to flip the switch to full-on Topps mode.  Maybe I was subconsciously hypnotized by the new era of MLB exclusivity that Topps had just entered.  Or maybe it was just something as simple as really liking the design of the base cards.

Because I really, really, really like the looks of 2010 Topps.  Especially the Update series.  It features some of the best photography that Topps has ever put forth.  Just my opinion, of course.

Therefore, it was tough for me to select just one card from this 330-card set to highlight.  But I knew my selection had to be one of the many interesting horizontal landscapes.  Gabe Kapler's card struck me as unique and whimsical enough to merit the nod.

In a lot of ways, the 2010 Topps set reminds me of 1991 Topps in regards to the clever photography.  And it's the photography in that '91 set that has stood the test of time, still finding fancy with even the most critical collector. At least that's the impression I've gotten.

What I've Learned from the Back of this Card:  Tampa Bay was Kapler's sixth (and, as it turned out, final) professional stop.  I remember him being quite a heralded prospect for the Tigers back in the late-90s.  In 1999 -- his first full year -- he slugged 18 homers.  It wound up being the power apex of his career.