At Friday's sports card and memorabilia show at Concord Mall in Wilmington, Del., I saw something that I had never seen at a hobby show.  A nickel box.

We've all seen dime boxes and quarter boxes and dollar vintage boxes and so on and so on.  But, this was a nickel box.  And that has to be a rarity because it's the first one I've come across in about 20 years of attending shows.  That doesn't mean they haven't been out there; for all I know there are nickel boxes all over North Dakota.  But, they don't occur very often in the NJ/PA/DE region.

I spied this one after I had already told Mrs. K that I was finally done with my purchases for the evening.  We were strolling along, heading for the restaurant, when I saw a 5,000-count box at a nearby table with a big .05 beaming towards me.  And, well, there was a dollar bill in my bi-fold that had instantaneously burst into flame.

Poor Mrs. K.  She doesn't even try to fight my mania.  Never has, which is why she is a keeper.  But, out of fairness, I hit the accelerator a bit as I went through this box.  Therefore, I wasn't as thorough as I would have been normally.  But, that doesn't mean I didn't get my dollar's worth.  Plucking 20 cards was fast and easy.

Oh, the contents of the box?  All 2012 football releases.  Most of them, anyhow.  I think.  I don't really follow the football releases as I once did.  But, all the usual suspects were on hand.

I was on the hunt for Buffalo Bills cards only, and I found enough to satisfy me.  And, since it's NFL gameday, I figured I would share my additions.

First, a pair of '12 Topps inserts of Hall of Famer Jim Kelly: 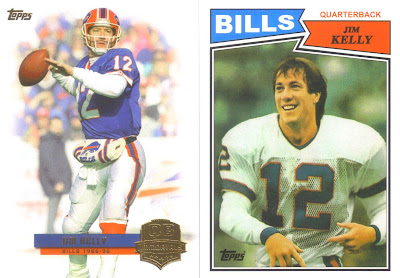 On the left, "Quarterback Immortals" and on the right a reprint of Kelly's 1987 rookie card.  Looking at the reprint makes me wonder if Topps has any plans for ever making an Archives-style set for football.  Or perhaps even bring back Heritage (why did they even discontinue it??).  I hope so on both counts.

Another insert from this year's Topps set is "Paramount Pairs": 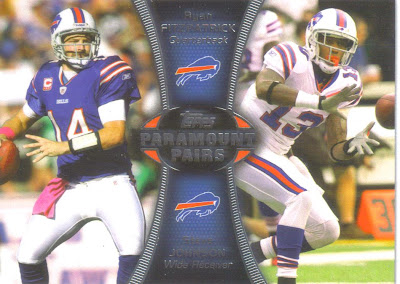 Ryan Fitzpatrick and Stevie Johnson.  This pair combined for seven TDs a season ago.  And they've hooked up for scores in each of the first two weeks this year.  I hope many more are on the way...

The other Topps product that I came across in this box was Platinum: 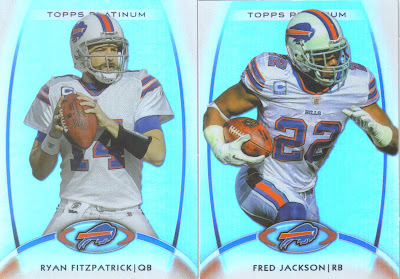 As usual, this is a very nice looking presentation.  Not sure how many other Bills players are present in this set, but these are the only two I came across.

There was a decent amount of Score in the box, but I came across but one Buffalo Bill: 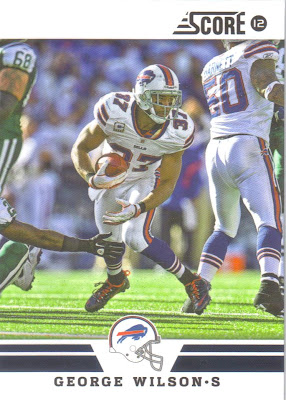 "The Senator" George Wilson.  The guy is a walking sound bite.  Pretty good safety, too.  It appears that this is some sort of parallel or subset card, no?  It's more like an artistic rendering than an actual photo, kind of in the style of Topps Heritage.  I'm not sure what the deal is with it, and I really have no ambition to look it up.

Here's a pair of cards from the Donruss Elite set: 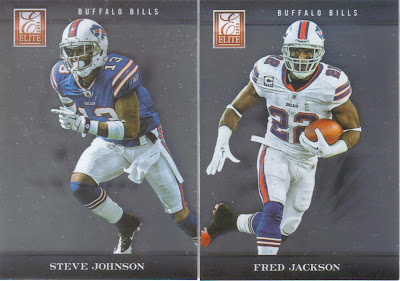 Stevie and Freddie.  A little bummed I couldn't find the Fitz card from this set.

But, I did find Fitzpatrick (and three teammates) in a run of Panini Rookies & Stars: 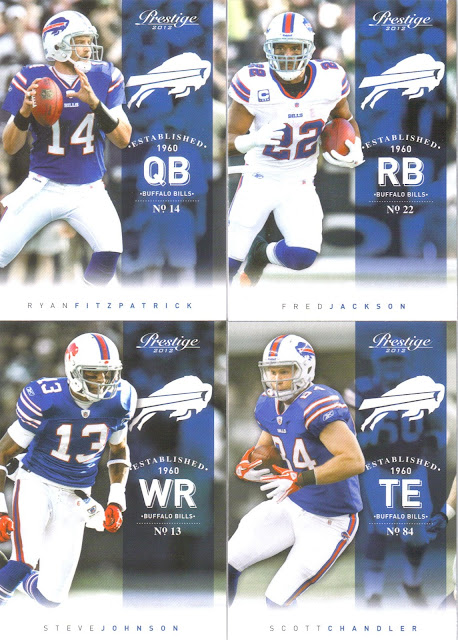 I was borderline shocked that tight end Scott Chandler found his way into both sets.  Good for him!

Next to the nickel box full of 2012 football, there was another nickel box featuring some older cards.  And by "older" I mean from the last decade or so.  I wasn't about to flip through that whole thing, so I quickly went through half of one row and came up with these two: 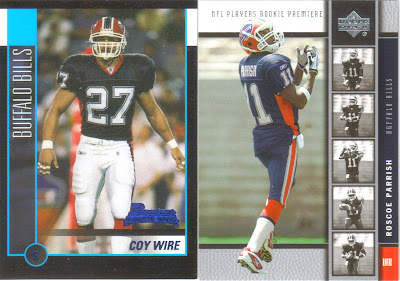 Nothing earth-shattering here.  Rookies of former safety Coy Wire and receiver Roscoe Parish.  But for .05 a pop, I didn't have much of an excuse to put them back.

To round out an even 20 cards, I grabbed a Sam Bradford Platinum for the nephew and a 2011 Leaf Certified of London Fletcher for Mrs. K.  That was very generous of me, no?

In my book, 20 cards for a buck is as good as it gets.  I don't expect to find a nickel box for another 20 years, but I'm glad I had access to one at least once.

I have yet to share the vintage football gems I snagged at this show, but I'll save that for the coming days.

In the meantime, enjoy your football Sunday, folks.