On the Horizon: Frankenset Additions 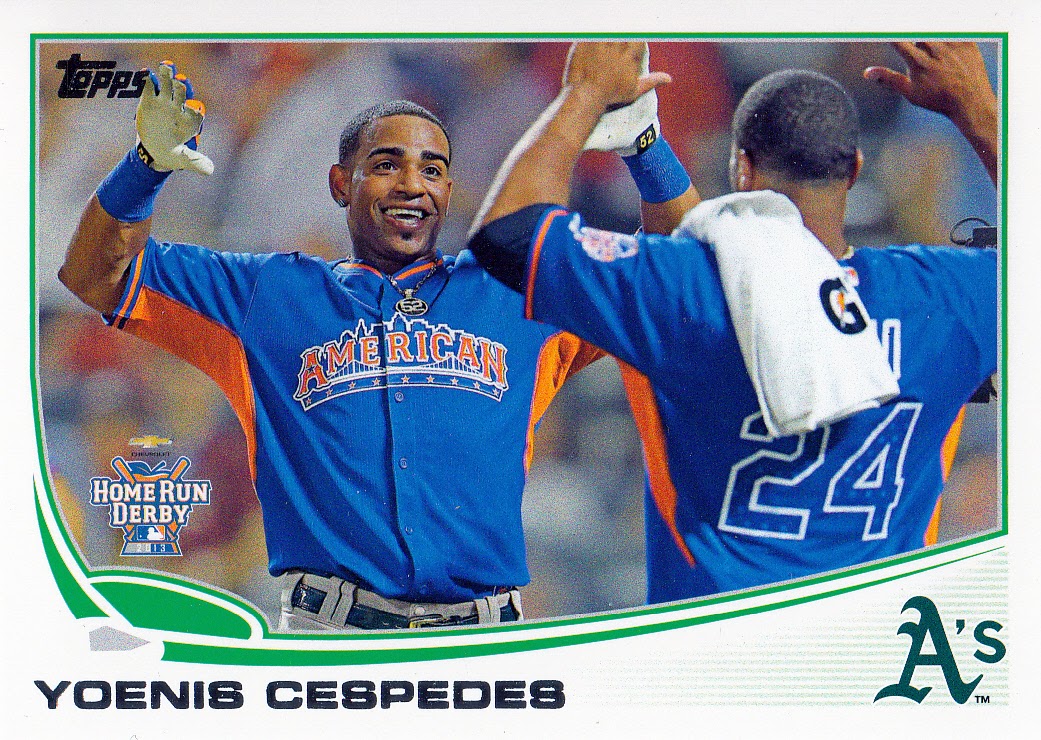 Last Sunday provided me an opportunity to hit up the monthly card show at my local fire house.  After putting in a hearty 21-hour day of work and travel on Saturday, I nearly opted out of going.  But, of course, the allure of cheap cards is always much too strong for such a weak little man like myself.

I'm glad I went, because I found a whole lotta great additons for my horizontal card project.  Tentatively titled "Horizontal Heroes," my proposed frankenset will ultimately consist of 660 cards of nuthin' but landscape-oriented cards.  And, thanks to Sunday's show, I found over 30 cards to either fill an empty slot or overtake a less-enticing card that was already holding a spot.

The Cespedes Home Run Derby card from last year's Topps Update series will occupy slot No. 7 in the set.  I'm not a huge fan of the Derby these days, but I'm naturally partial to the blue and orange jersey tops and caps that the participants wore at Citi Field last July.

For a dime, a pretty good start.  Let's see what else I was able to find...


I was overjoyed to find a vendor that had a monster box of mostly late '90s and early '00s commons for just a nickel apiece.  That's where this Vinny "Mighty Mouse" Castilla card came from.  A masterpiece!

I originally picked up this card because I know my buddy Marcus of Backstop Cards collects Erstad.  But, after checking out his checklist, I discovered that he already had this one from '98 Donruss.  Lucky for me, I needed a good No. 67 for the set.

Not one of my favorite years of Fleer Ultra (2003), but this card was a must.  I can't say I recall the Devil Rays ever wearing a uniform of that color.  Yeesh!

Quite possibly the most stunning card of the lot.  I think 2004 Upper Deck is an underrated set, and this is surely one of its standout pieces.  Then again, stay tuned because later in the post I have a feeling we'll revisit '04 UD.  By the way, it would take a minor act of God to unseat this one from the set.

I think this card was idling in a Just Commons cart list that I made out several months ago.  I never got around to placing the order, but I guess I can remove this Richie Sexson card.  You think he was safe?

Another card from last year's Update.  This is a fine combination of a great photo and a great player.  I'm glad to have Yadi in the mix.

I didn't realize how many horizontal cards were featured in Bowman's 2010 offering, but I came across quite a few.  I guess Bowman no longer does the horizontal thing, right?  Too bad.  I love the photo angle of this card. Also, we can see the ball in the beginning of flight.

I'm trying not to put too many cards from the most recent releases into the frankenset mix.  But, hey, when you're good you're good.  These Cubbies throwbacks are sensational!

Remember what I said about 2010 Bowman?  This one, of course, is of the gold parallel variety.  And, whaddya know: a cameo from Robbie Cano!

A real beauty right here.  Just your typical Stadium Club ho-hum photographic masterpiece.  We were so spoiled, were we not?  They say TSC is coming back later this year, but I'm going to table my excitement until I see it with my own two eyes.

Karl "Tuffy" Rhodes can plop down in my frankenset any day.  I'll probably never forget his three homer performance on Opening Day '94 against Doc Gooden and my Mets.  1994 happened to be my final year of Little League, and Tuffy's name was regular dugout conversation fodder that spring.

Another great nickname here with Darren "Dutch" Daulton.  But, not at his familiar position behind the plate. Dutch was one of the many veterans for hire on Florida's 1997 championship club.

I think I might favor 2010 Topps over any of the other base card designs trotted out this decade.  It certainly has some of the best photography.  Can you spot the baseball?

I know I've said this before, but I feel like Pacific produced about six-zillion different sets between 1997 and 2000. In spite of that, I still don't have nearly enough Pacific cards for my liking.  Thus, Tomas Perez is a doubly nice pickup.

I can't say I've come across too many cards of ol' BK Kim through my many dime and nickel-box hunts over the years.  And, if I have, I'd never given any thought to purchasing one.  Another reason to love frankensets.

Has a player ever had a more important photo for their base card?  Josh Beckett was one of the big heroes of the Marlins' 2003 World Series championship club.  And this 2004 Upper Deck card captures him in the act of bringing the Fall Classic to a triumphant and stunning close for the Fish.  In all honesty, this is one of my favorite cards of all time.  I picked up a copy last summer for my Josh Beckett collection, and I jumped at the chance to get a spare copy for the HH project.

Another winner from 2002 Upper Deck.  This card reminds me of a Subway commercial I saw earlier this evening.  Though, unlike the TV ad, this card isn't annoying whatsoever.  Remember when baseball cards used to be cool like this?

I've got nothing but love for manager cards when it comes to this frankenset.  And 2009 Topps had some pretty good ones.

I believe I traded this card to Mr. Dime Boxes himself, Nick, last year.  That was before my whole horizontal card fetish took hold.  It's all good, though, since we both have a copy of this tremendous card now.  And, yup, Jeter cameo.  That's the fourth Yankee cameo in one post, in case you're keeping score at home.  Cano (twice), Posada and now The Captain.  Do with that what you will.

One of these days I'll get around to posting my full Horiztonal Heroes progress in a tab up top.  Til then, I hope you enjoy these little glimpses into the construction of the set.