On the Horizon: More Friars


As far as horizontal cards go, you can't get much cleaner or more attractive than a shot like this one.  Whether or not you know Wiki Gonzalez from Adam is besides the point.  The former San Diego catcher and short-lived big leaguer has one of the snazzier cards from the 2001 Topps set.

This and a bundle of other horizontal dandies came my way not too long ago from my main man Marcus of Backstop Cards.  Marcus has really been a big help with my ongoing frankenset project which places cards of landscape orientation at center stage.  Of course, a good many of them are Padre themed, but that's A-OK in my book when they take on the appearance of Sir Wiki.

Another sure-fire, stone-cold lock for lifetime admission into the Horizotal Heroes frankenset.  It would take quite an out-of-this-world card to knock Tony's boy from his perch at slot No. 96.  You think his old man could ever make his body move like that?

Khalil Greene always bothered me during his playing days.  Maybe is was his long hair; perhaps it was his penchant for coming up with some big hits whenever his team opposed the Mets.  I can't hold any of that against him in this instance.  This is a great-looking card.

The combination of the camo top and the catcher's crouch make Michael Barrett's 2008 Upper Deck card a supreme winner.  I'm starting to wonder which set is the Upper Deck's greatest in terms of kick-ass photos: 1993 or 2008.  That would be a pretty good study.

Despite the lack of an official MLB license and, therefore, no team names, etc., Upper Deck's 2010 set holds it own in the photography department.  Heath Bell--a former Met--is a big boy and does a pretty good job of filling up the horizontal frame.  Looks like he could use a bit more head room, though.

Not all the neat horizontal cards I received from Marcus were Friars... 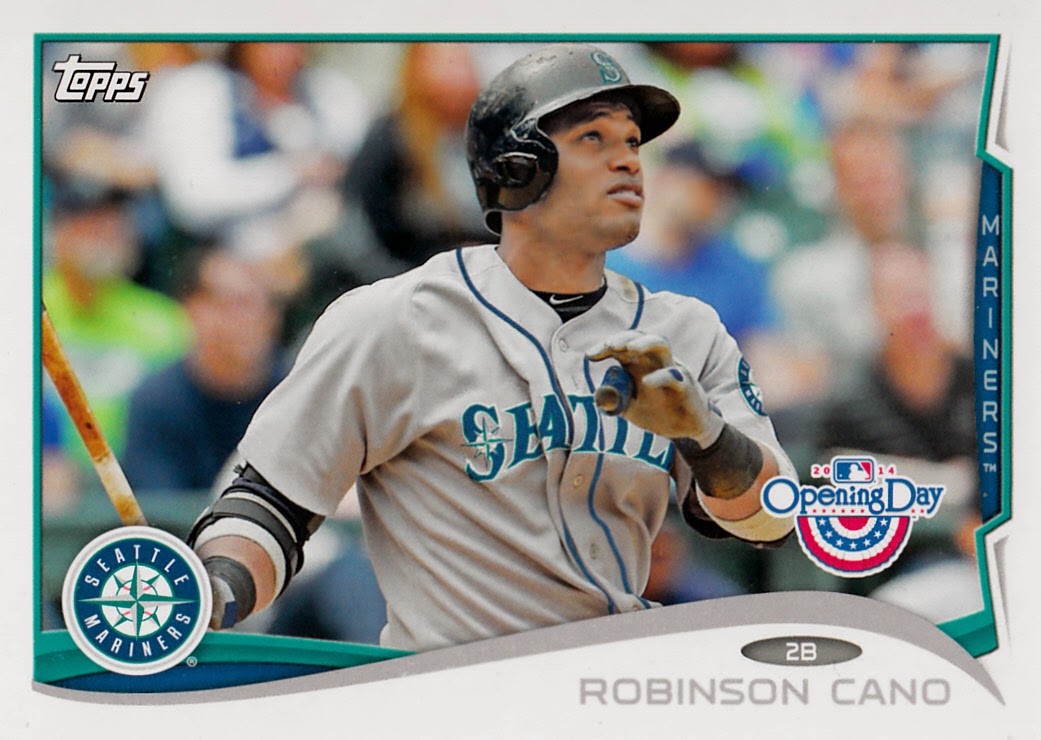 Ah, Robbie Cano in his new threads.  Well, yes, of course, this is photoshopped, but you get the idea.  My first card of the former Yankee in Seattle colors.  I finally decided to start collecting Cano's cards last year, so this one will join its cousins in the player collection box.

I collect Brett Butler, too, but luckily I have a copy of this in my BB collection already.  So this one is free to join the ranks of the frankenset.  Looks to me that Brett is about to smack the Dodger logo into right field for a base hit.  No objections here!

Okay, aside from help with the horizontal cards, Marcus is always a good bet to share the wealth when it comes to my Heritage addiction.  I'm sure it has something to do with all the begging and pleading I do.  Who knows. 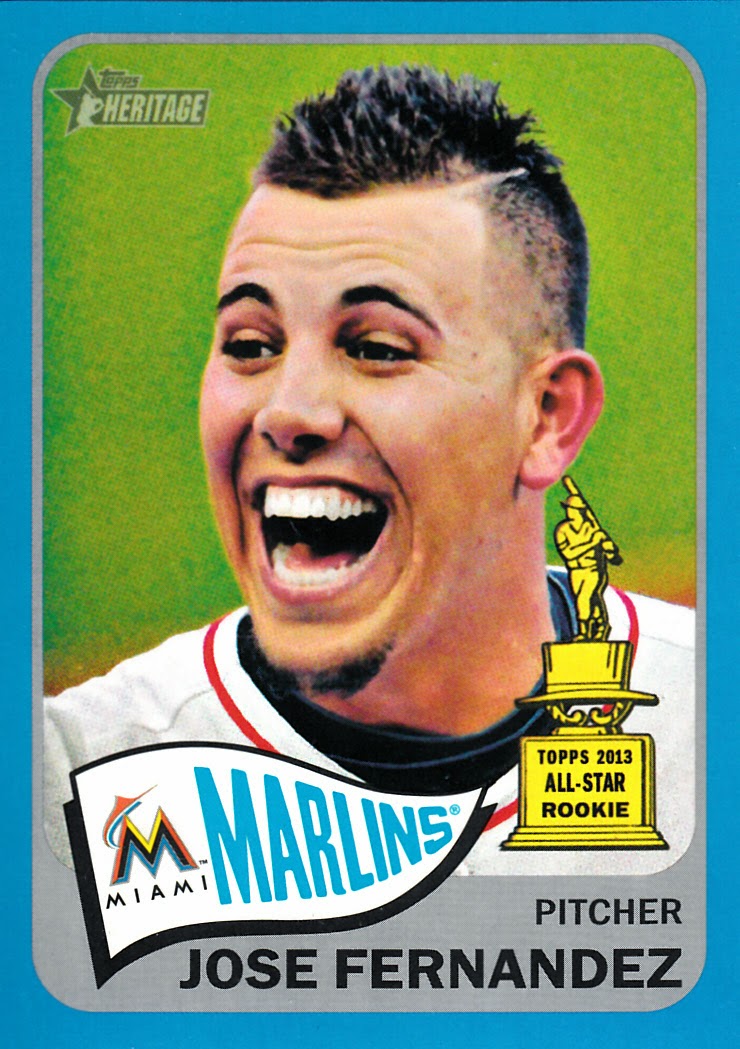 This is definitely my favorite card from this year's Heritage, and I love the blue border version even better. Fernandez is one of the best young guns in the big leagues and he happens to one of the current non-Mets that I really root for.  Coming off a big rookie campaign, Jose is off to a great start this season.  His 14-strikeouts against Atlanta earlier this week tied a career high. 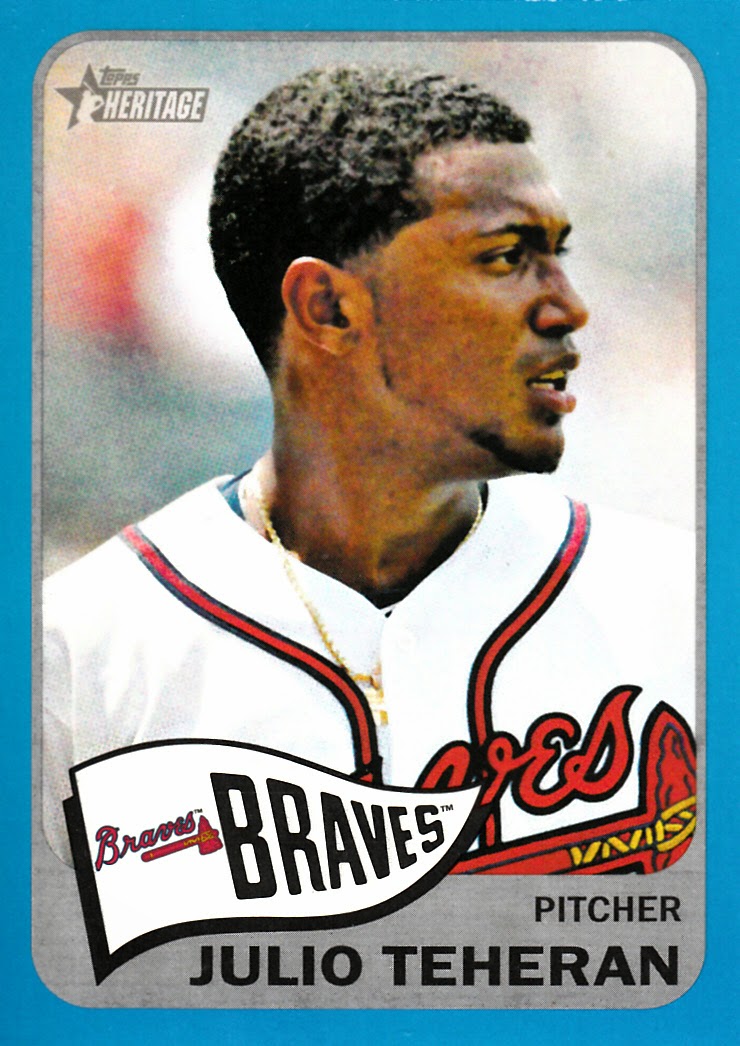 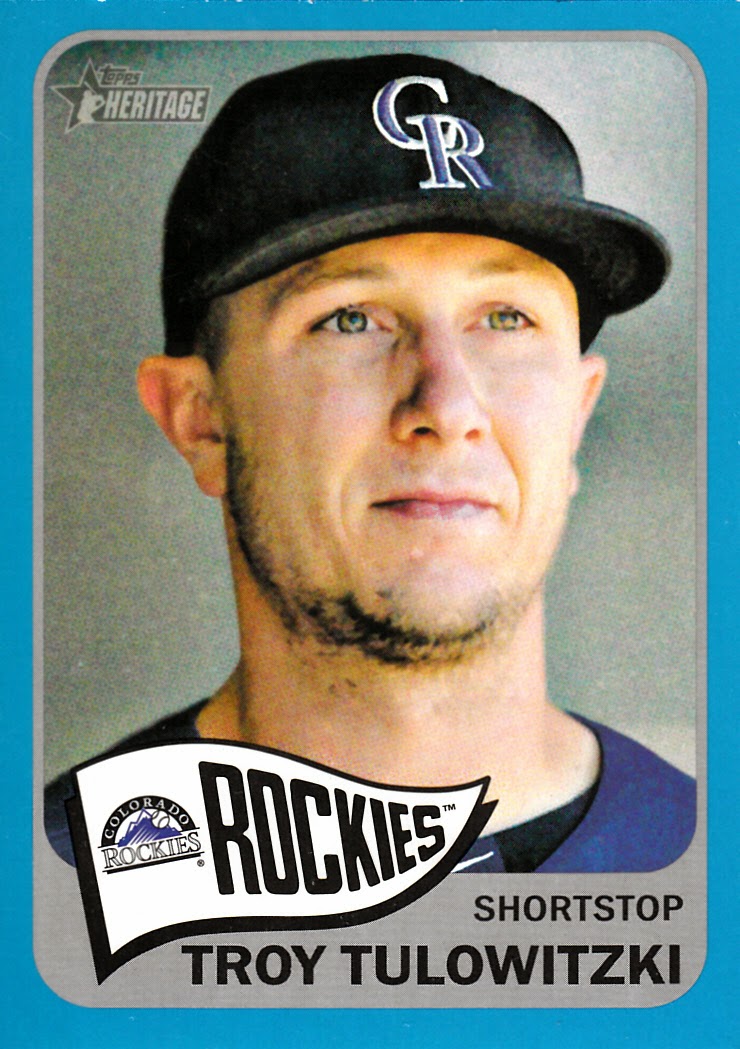 With these additions, I've now got 11 of the 25 Walmart parallels from this year's Heritage.  Though I'm not quite at the halfway point to completing the collection, but that's a pretty darn good start. 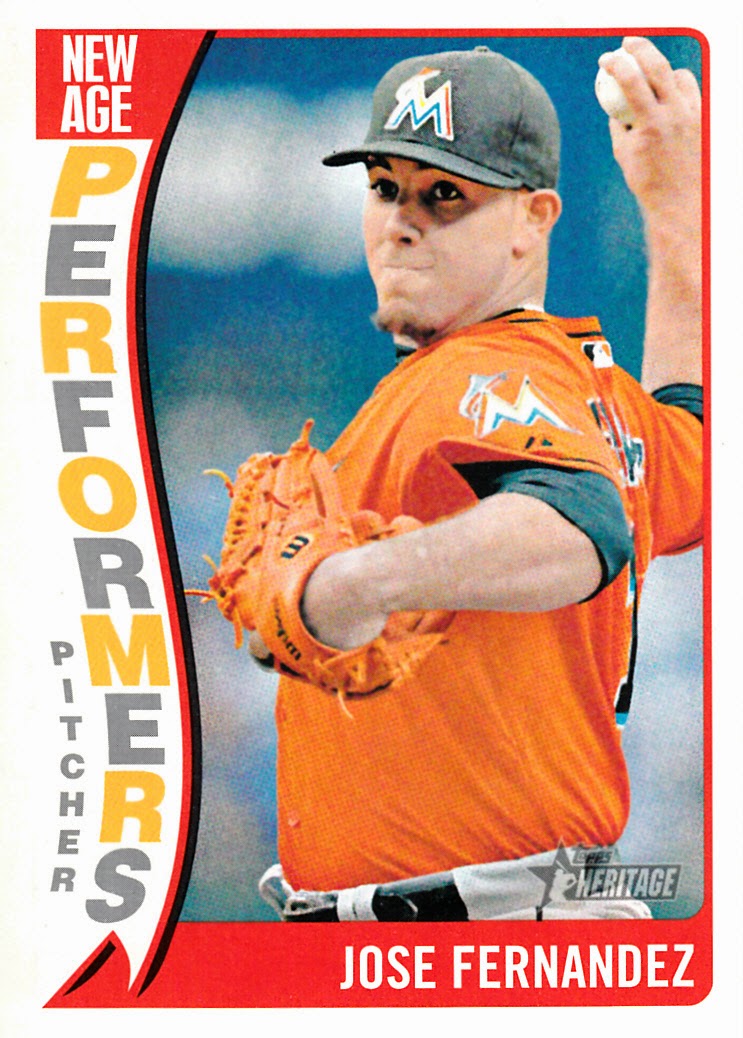 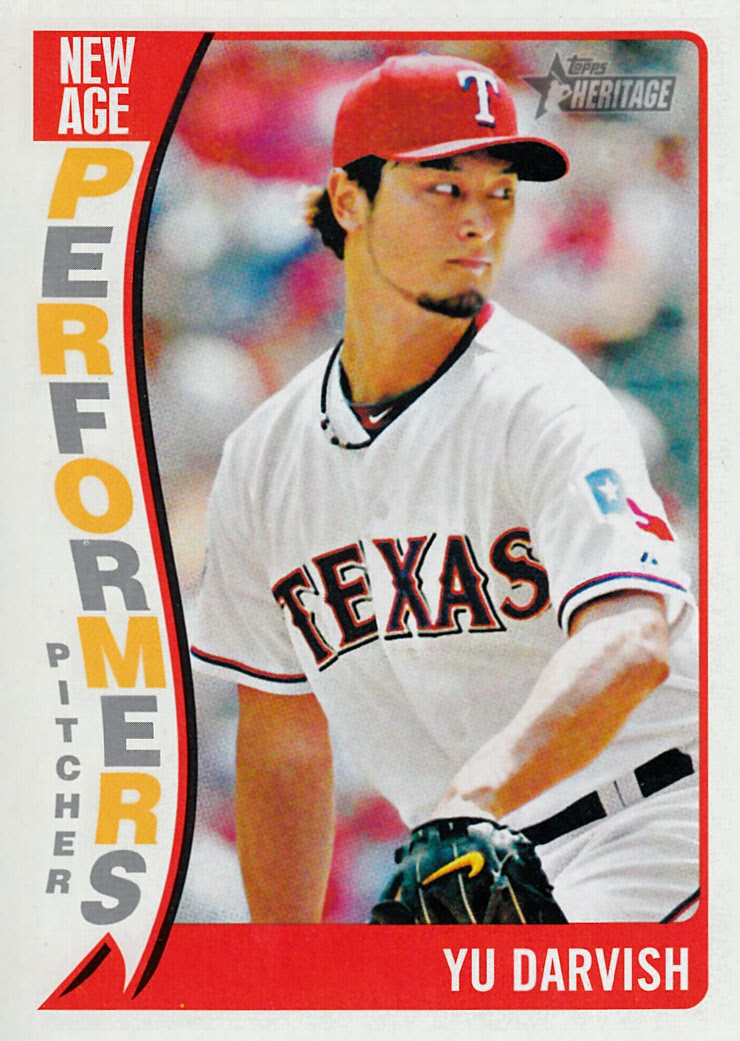 Not a bad duo of right-handers on display here.  I'll say it again: These are the best-looking New Age Performers that the Heritage brand has ever churned out.  It's all about the banner on the left edge. 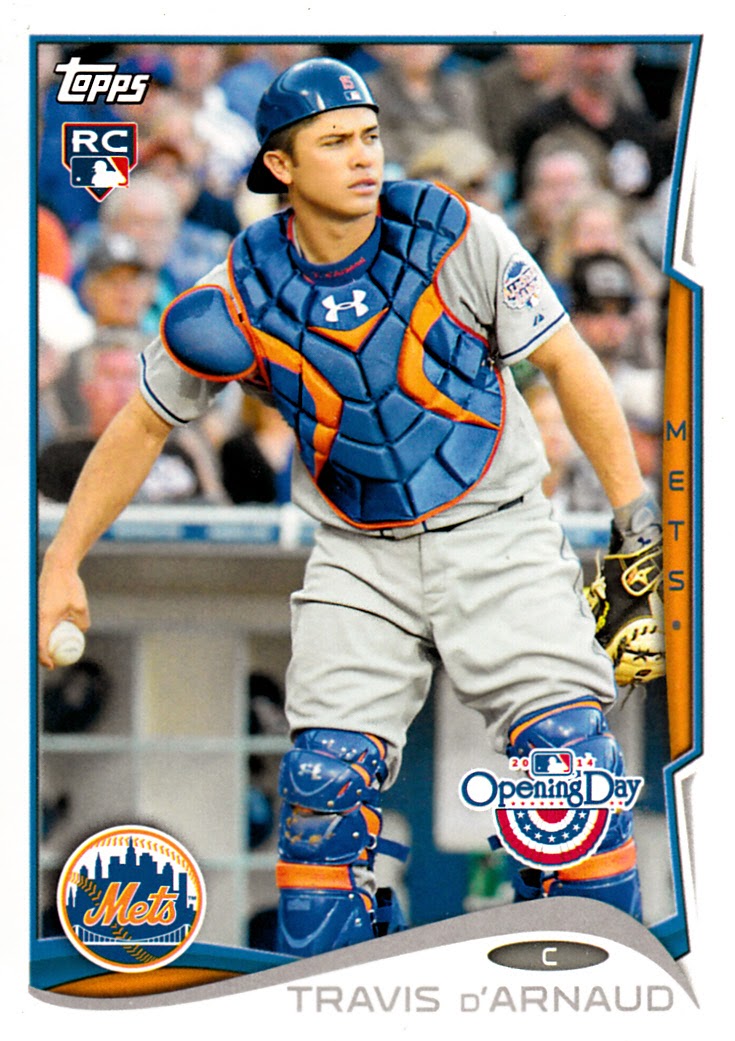 As one of the top names in prospect circles, Travis d'Arnaud sure does have his fill of cards across all the Topps and Bowman sets this year.  Hopefully his on-field production will justify the deluge of d'Arnauds.  He's off to a slow start with the bat, but he's a hell of a defensive catcher already.  Love this card, by the way. 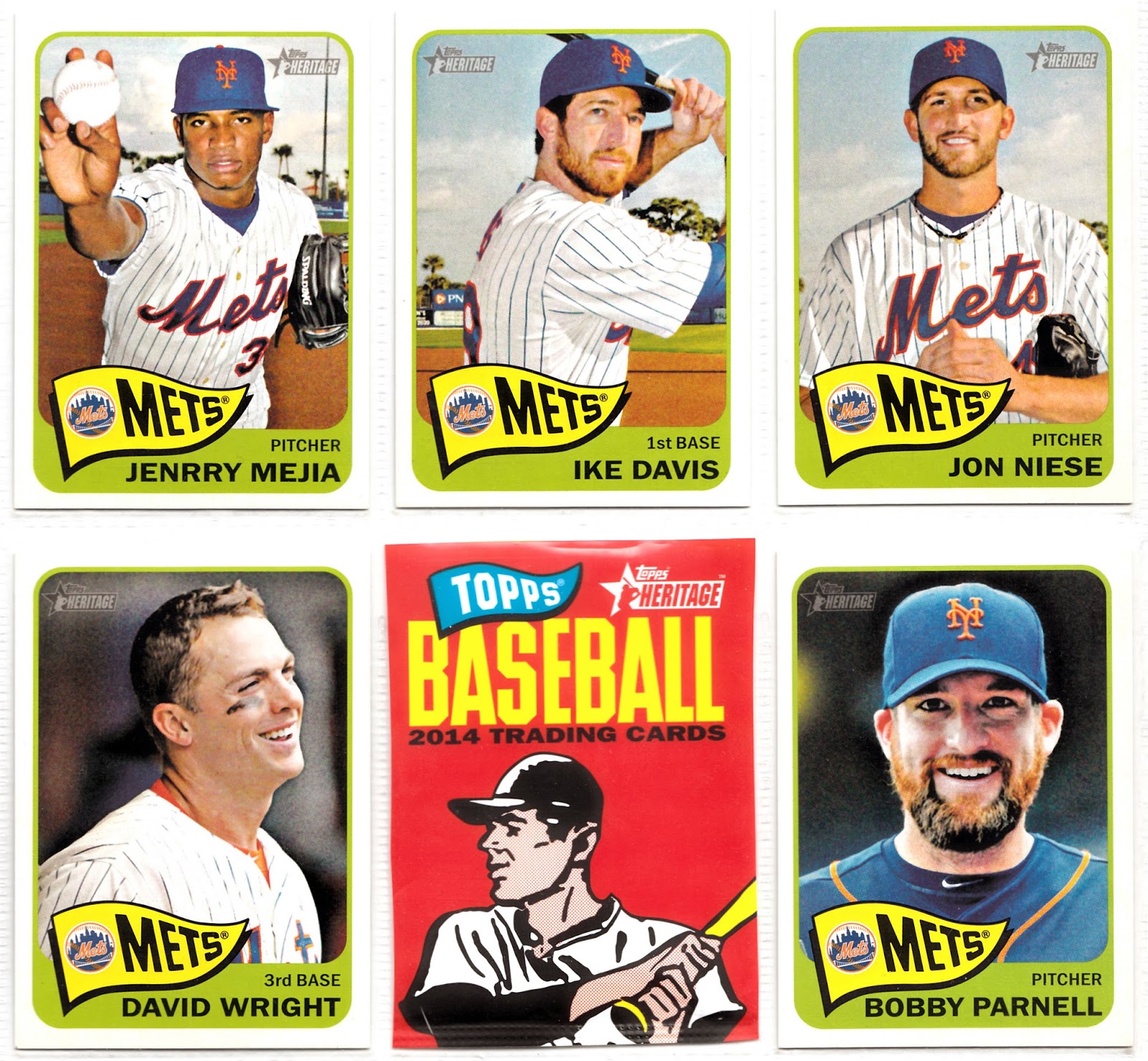 I've have a devil of a time pulling a lot of Mets from my Heritage pack ripping ventures.  So I was happy to see these in the package that Marcus sent.  I need 'em both for my Heritage base set as well as my Mets collection. I especially love that Jenrry Mejia.  Might have to add that one to the All-Time Mets binder.

Cheers to you, Backstop, for another terrific package of cards!