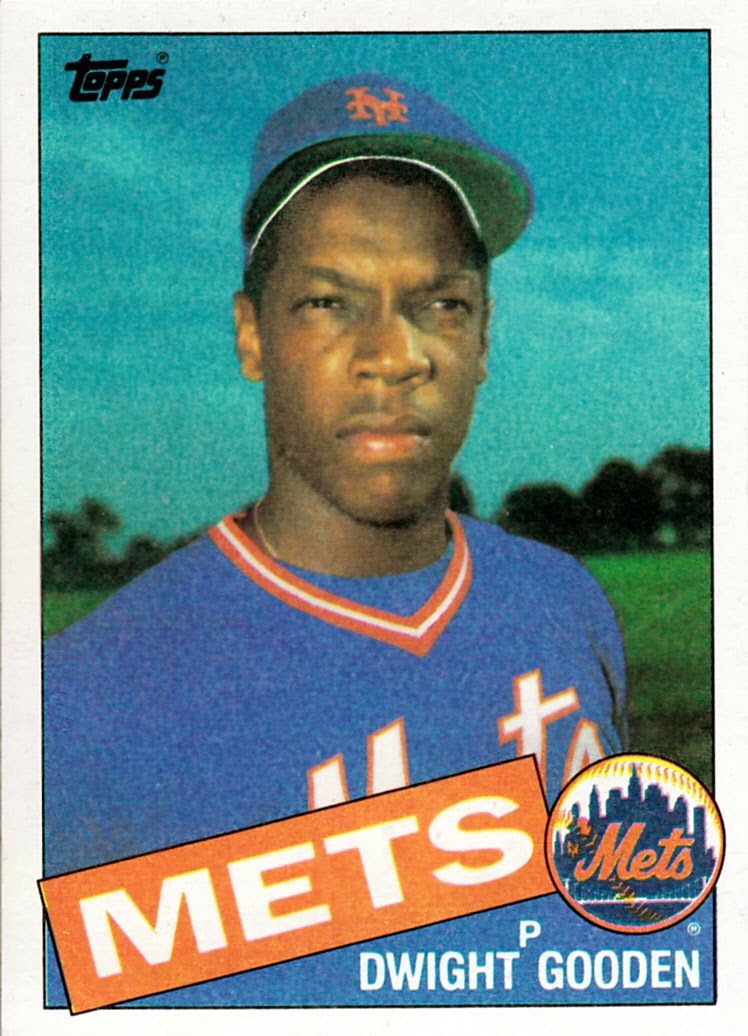 Today marks the 30th anniversary of the debut of Dwight "Doc" Gooden for the New York Mets.  The Tampa native stormed through the Mets minor league system en route to his big league debut on April 7, 1984 at the tender age of 19.

In honor of the occasion, here are five random cards from my Gooden collection.  The '85 Topps up top being the oldest card I have of Doc.  His 'true' rookie -- the '84 Topps Traded -- still eludes me.

Gooden's first taste of the Majors came in Houston's Astrodome.  Mike Fitzgerald was his catcher and Ron Gardenhire played second base and fielded the first two outs of Doc's career.  The Mets outfield that day consisted of George Foster, Mookie Wilson and Darryl Strawberry.

Doc twirled a perfect first inning in the 'Dome, fanning Dickie Thon with some high heat to finish the frame. Strawberry would hand Gooden his first lead with a solo home run in the top of the second off Bob Knepper.

Dwight retired the first six 'Stros he faced before surrendering a lead-off walk to Denny Walling in the third. He would eventually escape a first-and-third jam later in the inning thanks to a pair of K's.  Doc would fashion five strikeouts over his five innings of work.

The Mets offense, meanwhile, would build a 3-0 lead for Gooden, thanks to a two-run double by Mookie in the fourth.  The New York pen yielded a pair of runs, but Jesse Orosco recorded a six-out save and the Mets gave Doc his first big league win, 3-2.

I was only three years old when Dwight Gooden arrived on the scene, thus beginning his barnstorming of Big Apple baseball culture.  It's a genuine shame that Doc couldn't keep out of trouble because he naturally had the talent to be one of the all-time greats.

Nonetheless, he's still a Mets icon and one of my all-time franchise favorites.