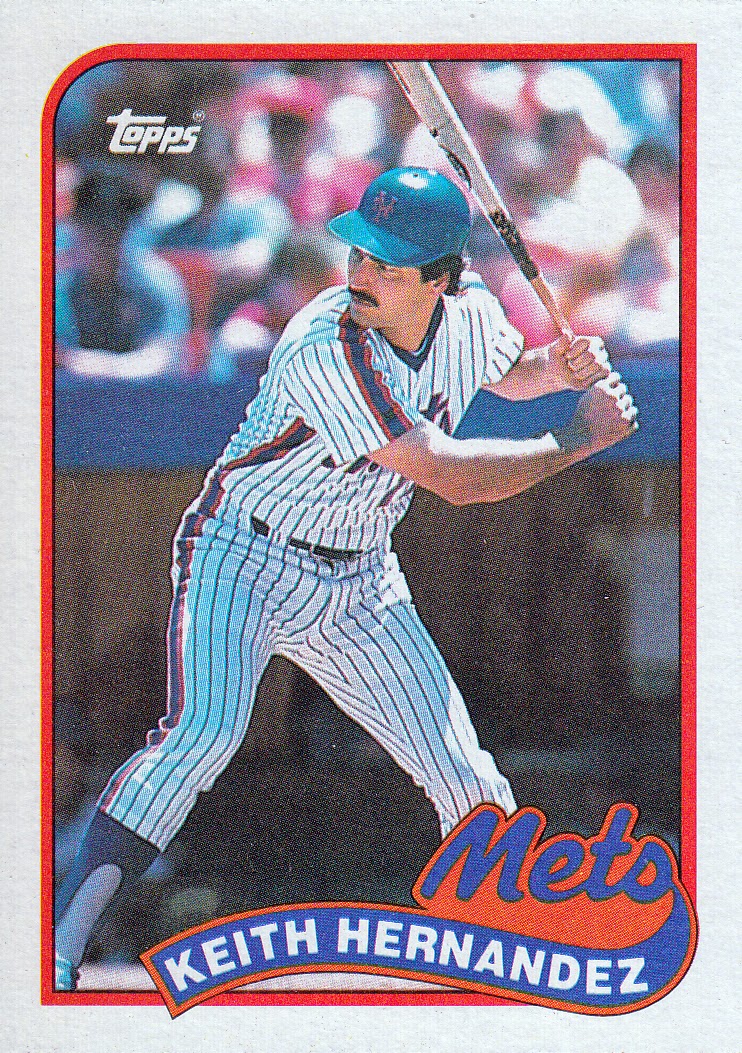 Boy, I've been lucky to be the recipient of some really amazin' trade packages over the past couple weeks.  The one I'll detail today comes from a true-blue friend of the blog, Shane D. of Shoebox Legends.

Before I get into that, may I share an unrelated anecdote with you?  My wife, Mrs. K, was running errands with Gabriel at Target earlier this week.  I received a text at work that read, "He needs a Bowman pack, right?"  She was referring, of course, to the quest I've undertaken to buy the little guy one pack each of every Topps baseball brand issued this year since it's his birth year.  Apparently, without any prompting from me, Mrs K made her way down the card aisle on a mission!  I was so proud.  And, yes, he did need a Bowman pack.  Sadly, she didn't pick one up for the old man.  But, that's okay, dad's got plenty of cards to keep him busy.

Which brings me back to the focus of this post: the cards sent to me by Shane.  Lots of neat stuff, just like the first trade we completed.  Along with a couple bundles of cards, he included another 1993 Pinnalce fat pack plus a few packs of OPC mini League Leaders from 1987.  But, I'll share those in a later post; today I want to focus on the loose cards.  Cos there are plenty of great ones!

Sometimes it takes a trade package from a blogger buddy to make you appreciate a card you've seen a thousand times before.  That's the case with the '89 Keith Hernandez above.  It's a clean, classic-looking card of a great player from my favorite all-time Topps set.  Perfection! 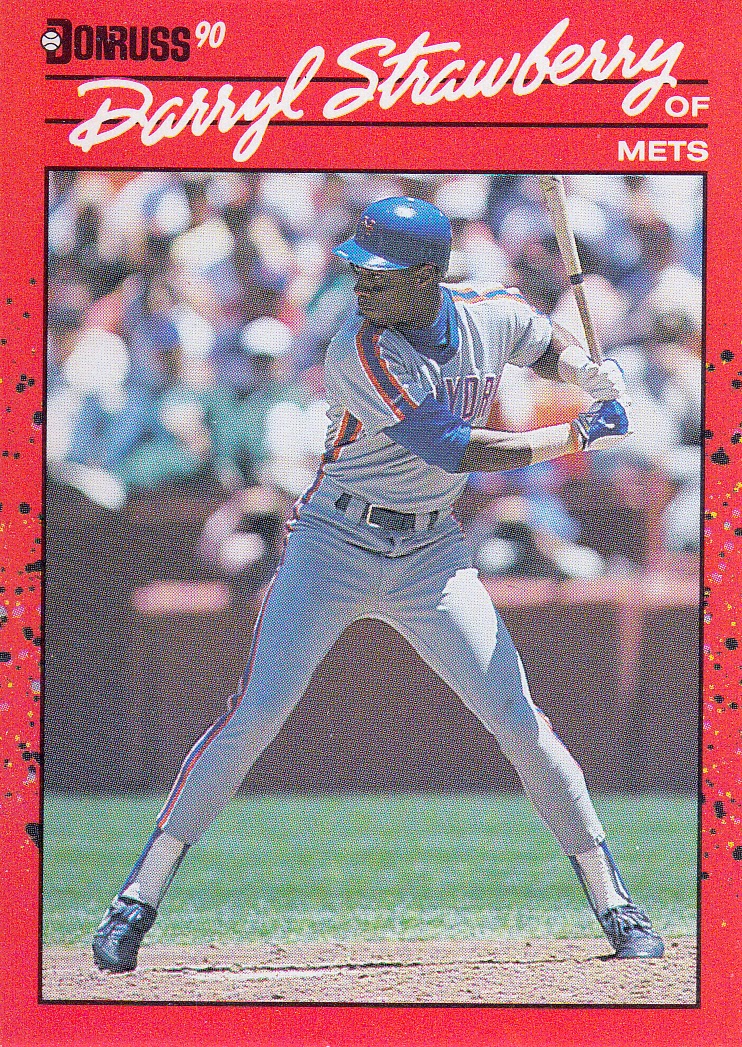 1990 Donruss, like 1991 Fleer, suffers from some God-awful border coloring and design.  Otherwise, each set features some pretty dandy photography. 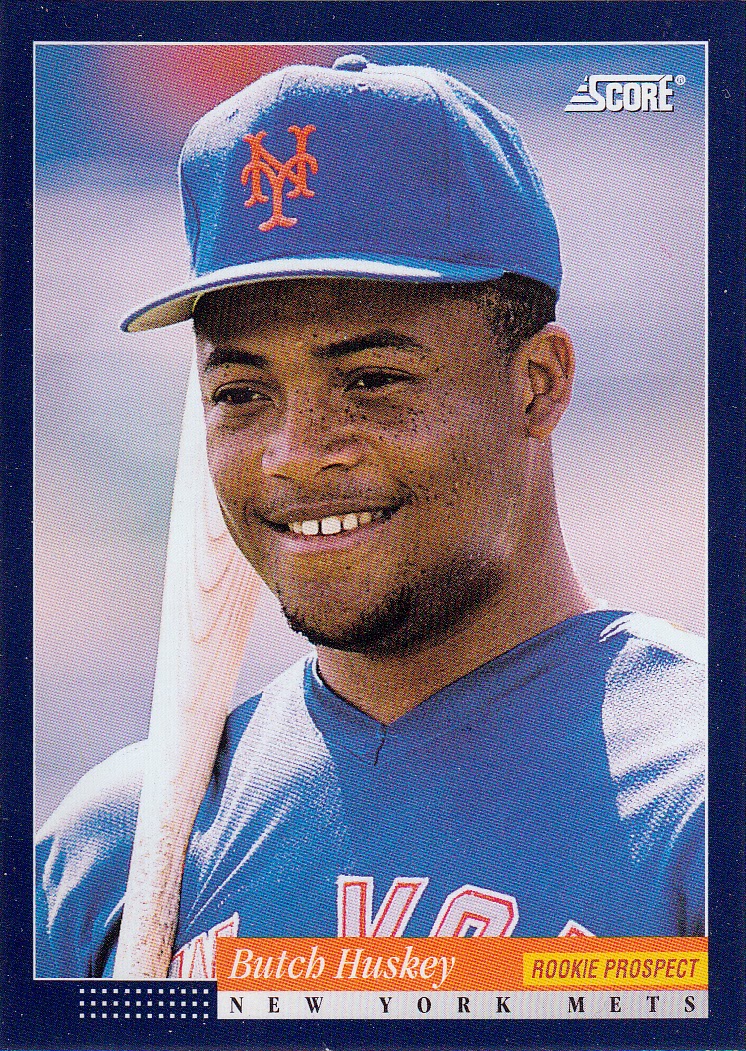 Butch Huskey rookies are always welcome at the Clubhouse.  This is one of the better rookies of the big guy -- the last Mets player to wear No. 42. 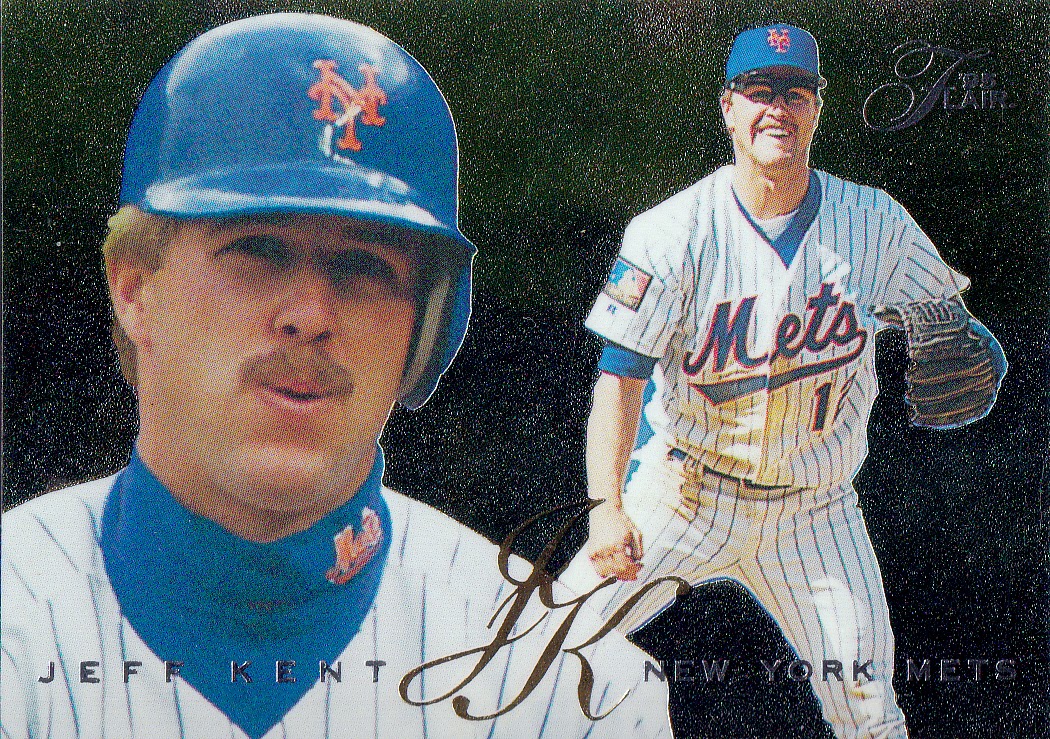 Jeff Kent never really got a fair shake in New York.  Who knows what would have happened if the Mets opted to hold onto Kent instead of dealing him at the deadline in '96.  Though, that trade brought Carlos Baerga -- one of my all-time favorite players -- to Queens. 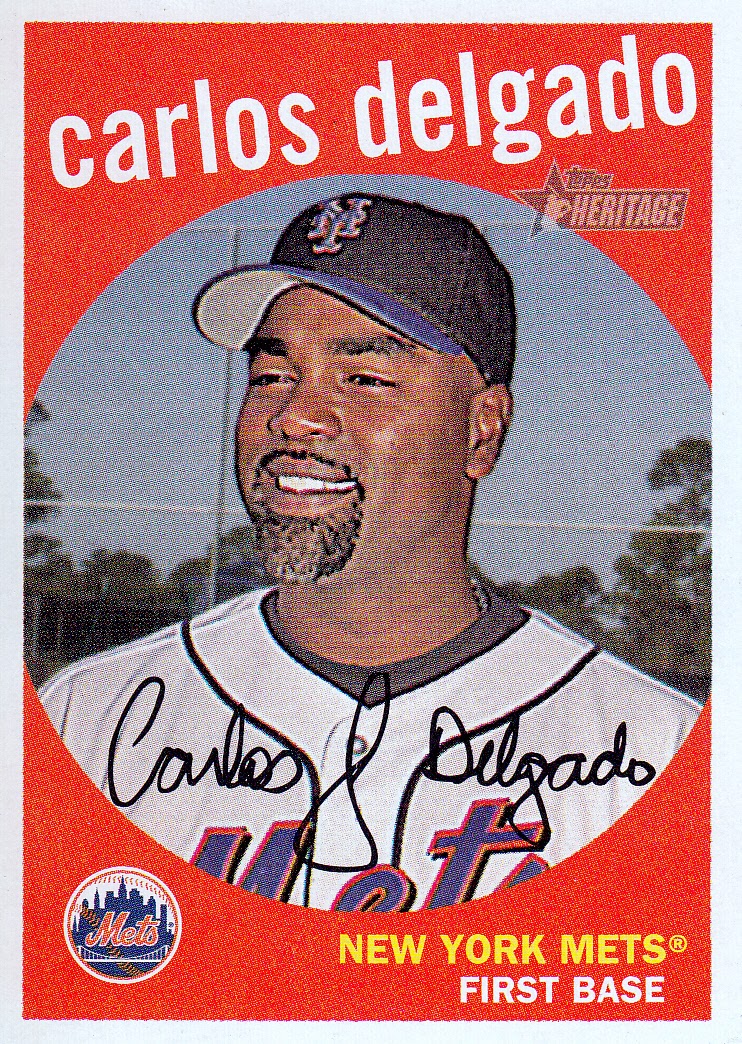 Since the Subway Series is presently occupying the New York baseball scene, now would be a good time to reminisce about Delgado's nine-RBI game against the Yanks back on June 27, 2008.  That's a Mets record, dontcha know! 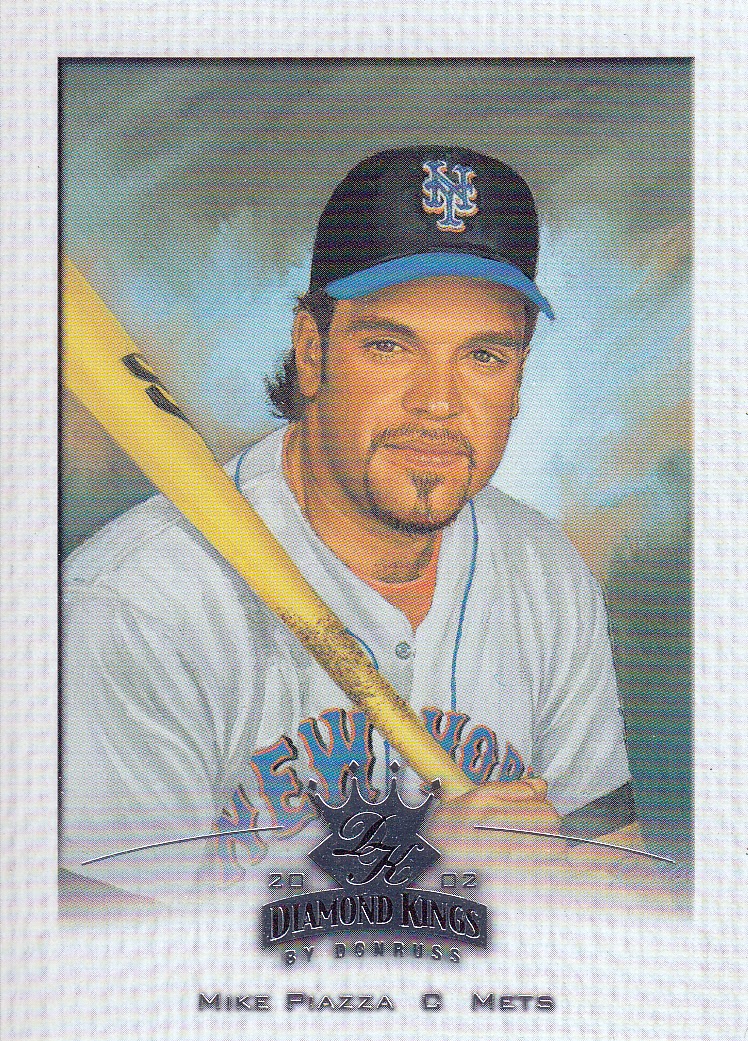 This guy had some pretty big offensive days against the Bronx Bombers, too.  Before he was being used as dart board by Roger Clemens, Piazza owned the Rocket in their head-to-head Subway Series meetings. 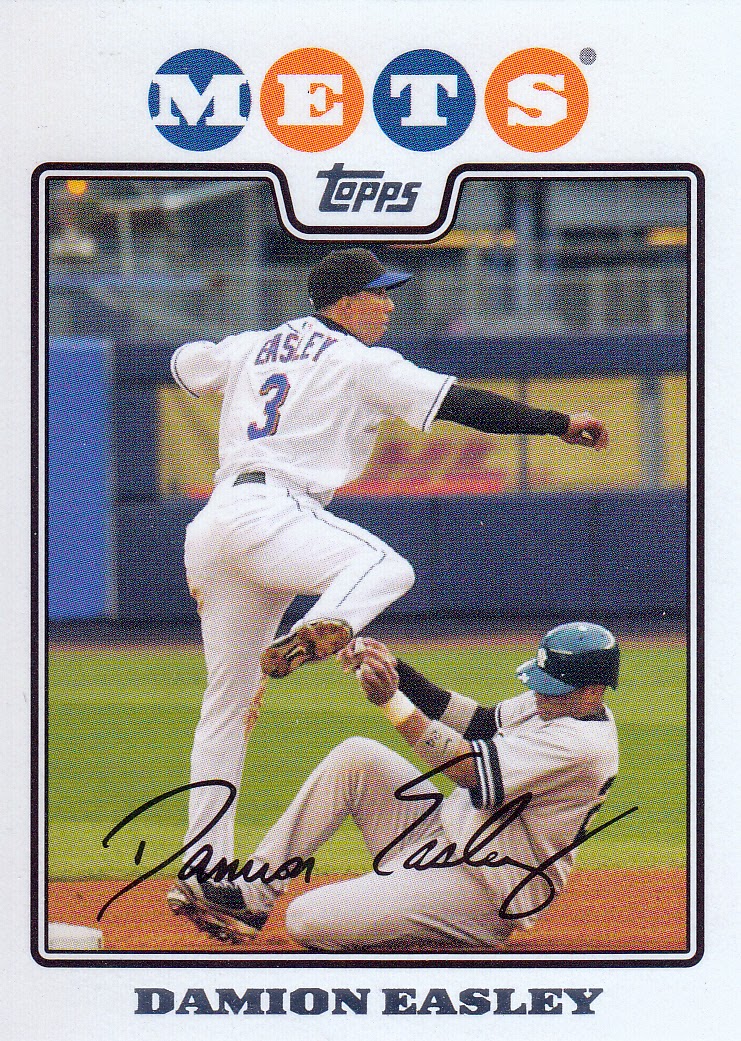 Hey, this one fits into the Subway Series discussion perfectly, does it not?  The Mets took two out of three from the Yankees at Shea Stadium during the 2007 season.  Easley played in all three games and went 2-for-10 in the series with a solo home run.

Okay, how about some nifty horizontal cards? 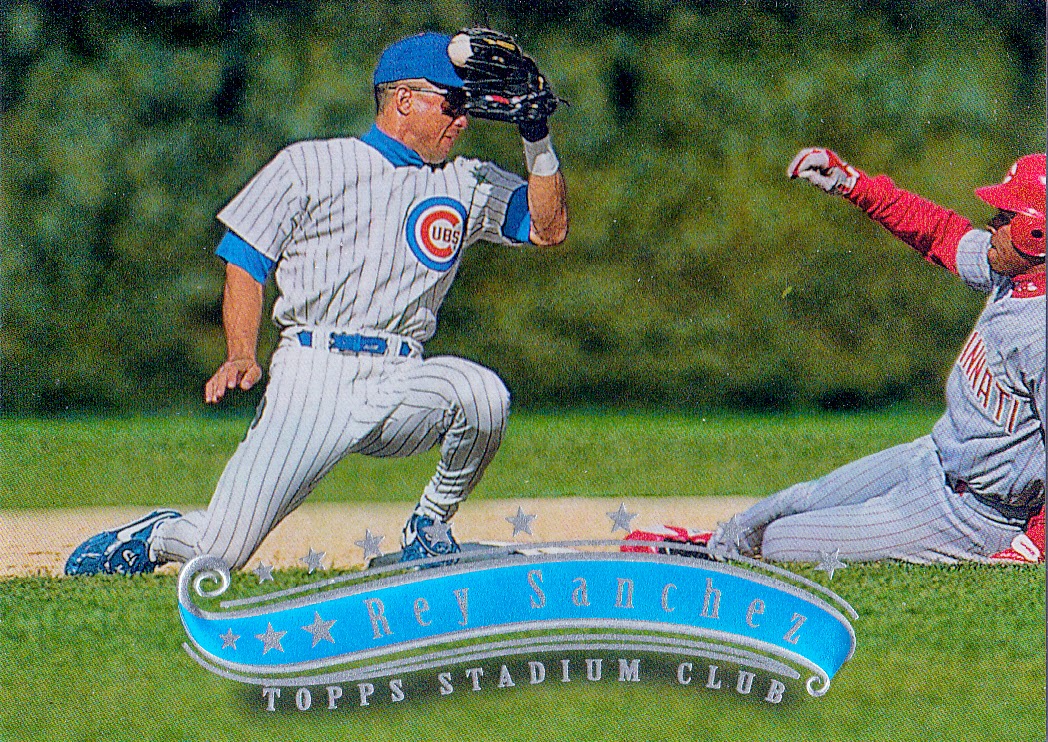 Not only is this is a fantastic card, but it's from my favorite Stadium Club set: 1997.  That's quite a snow cone that Rey Sanchez is working on. 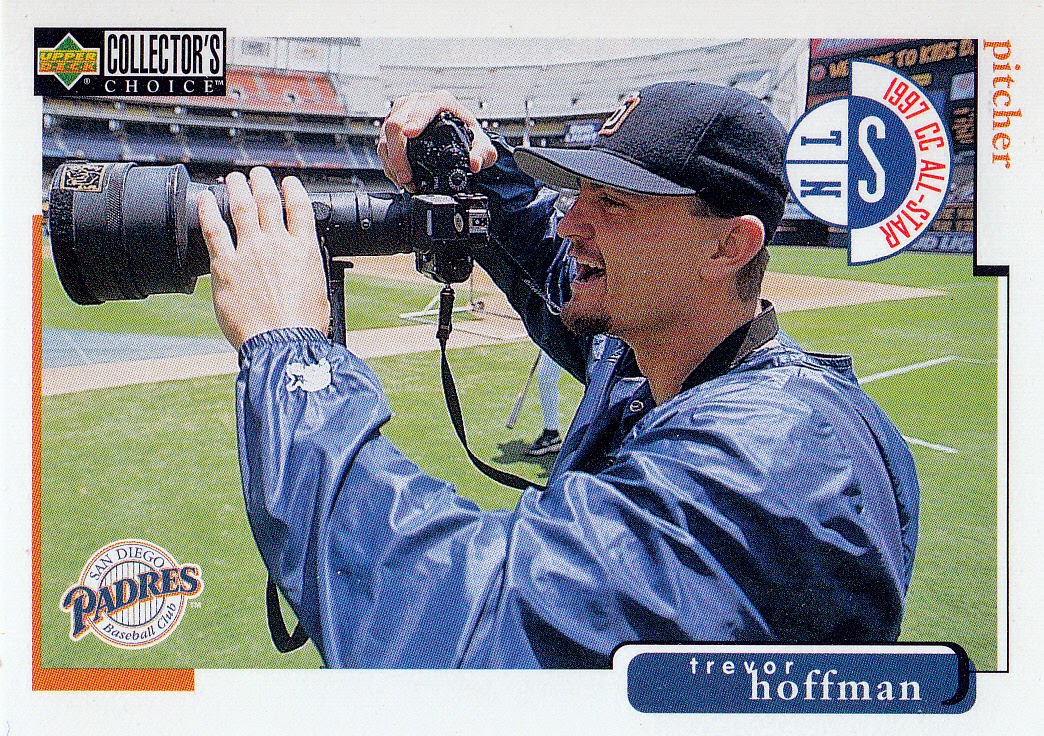 Man, baseball players sure do enjoy doing crazy stuff.  During the course of a 162-game season, I guess you have to find ways to amuse yourself, no? 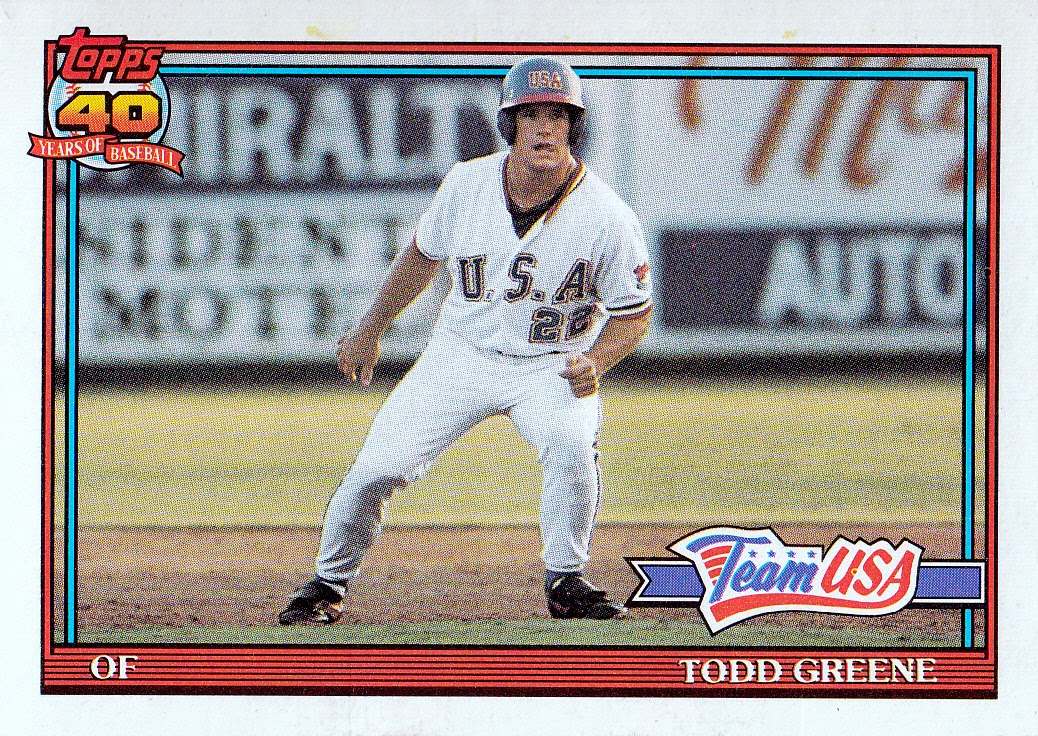 All three of these cards have great potential for the Horizontal Heroes frankenset, but this Todd Greene '91 Traded card stands out above its peers.  I can't believe I forgot about this card; it's pretty freakin' great! 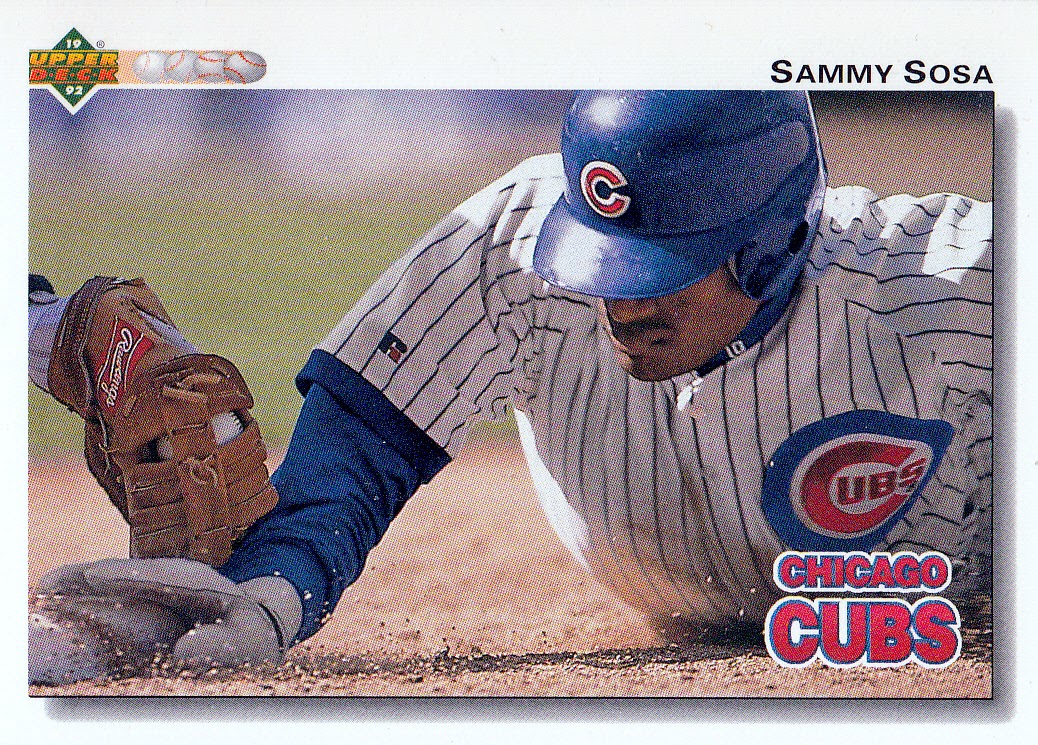 Since I collect Sammy Sosa cards and this is a Sosa card I didn't own, this one won't qualify for the frankenset.  This is a pretty intense photo! 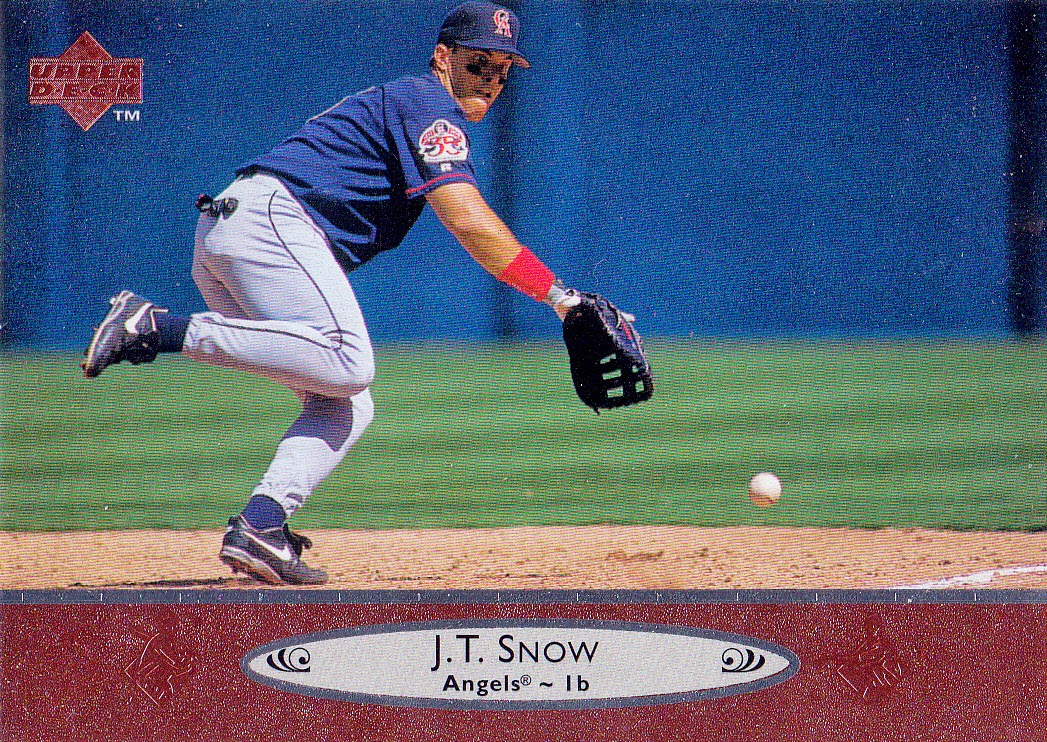 Snow is also a guy I collect (weird, right?).  A brilliant card of the defensive wizard.  And it's on the under-appreciated 1996 Upper Deck platform.  What's not to like here? 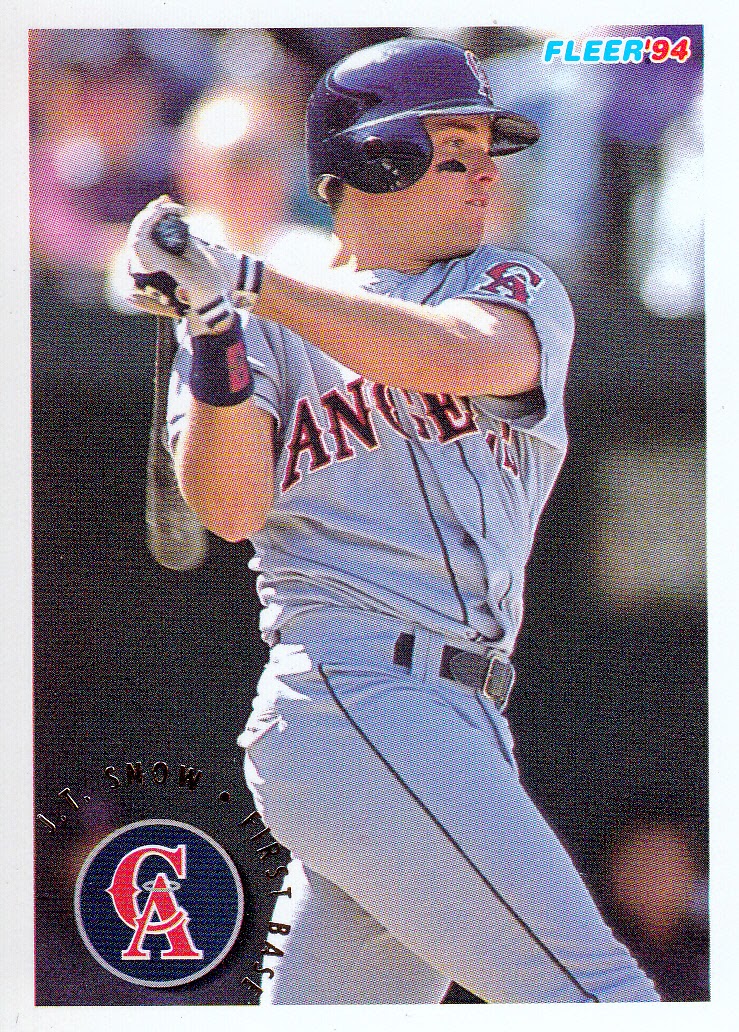 Speaking of J.T., here's his 1994 Fleer card.  This is a nice, clean set.  Hard to believe such a conservative design was succeeded by the wild and trippy experiment known as '95 Fleer. 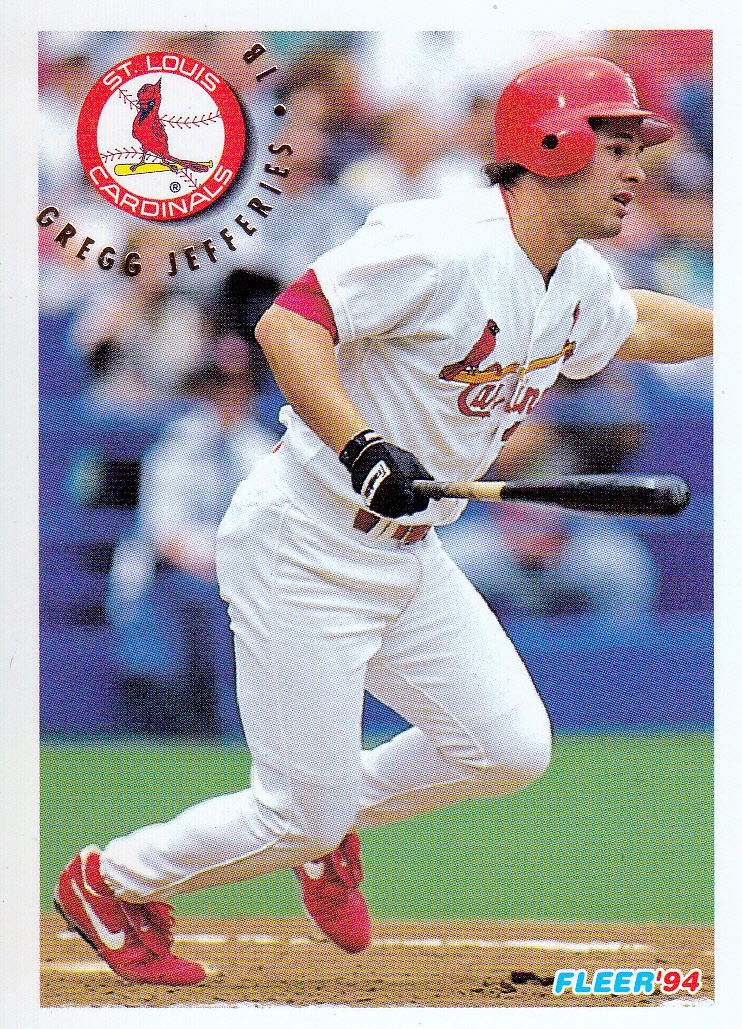 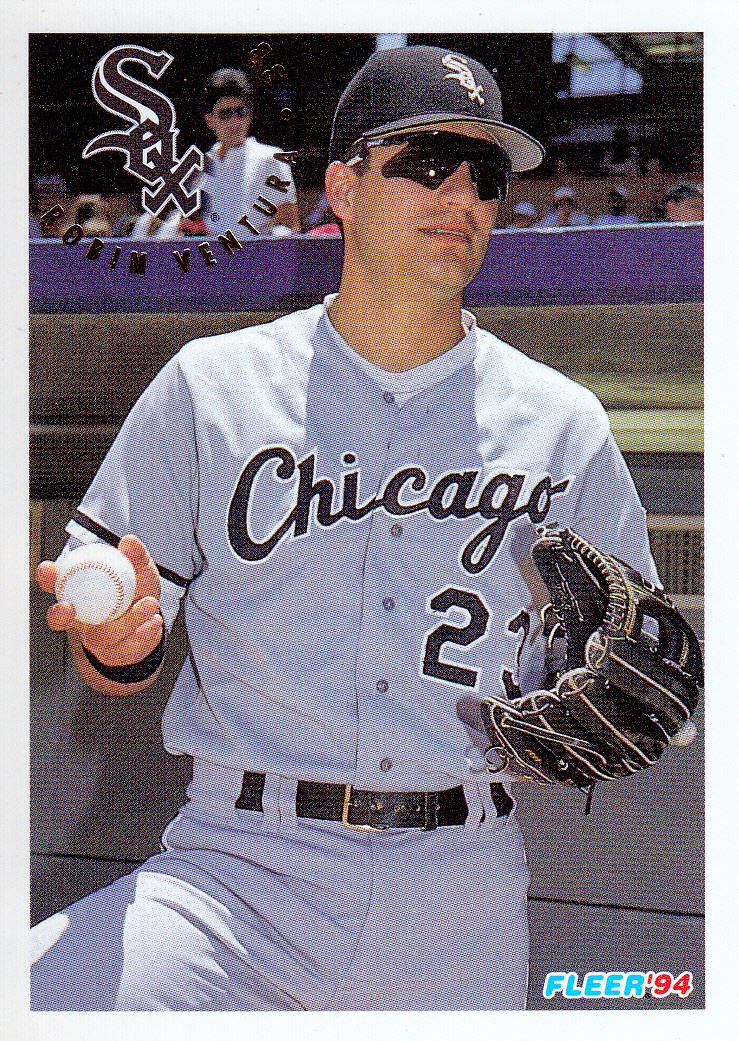 And, last but not least, a pretty solid addition to my Gabriel collection... 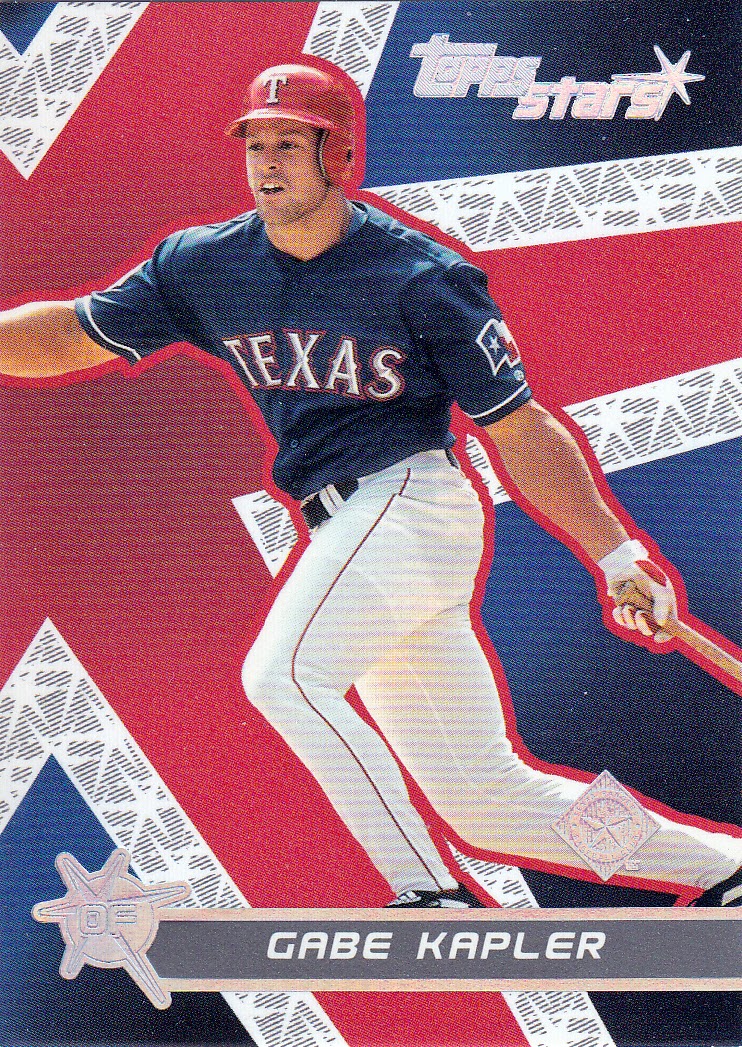 I've always been partial to the Topps Stars brand from back in the day.  Such a cool design.  I have the Jose Reyes rookie from this set, which is one of my all-time favorite cards.  And I've always wanted the Pujols rookie.  I'm sure it can be had for a lot cheaper nowadays than, say, five or so years ago.

Anyhow, thanks again for hitting me up with some great cardboard, Shane!  I had ripping into those hockey packs, too.  Especially since my New York Rangers are heading to the Eastern Conference Finals!