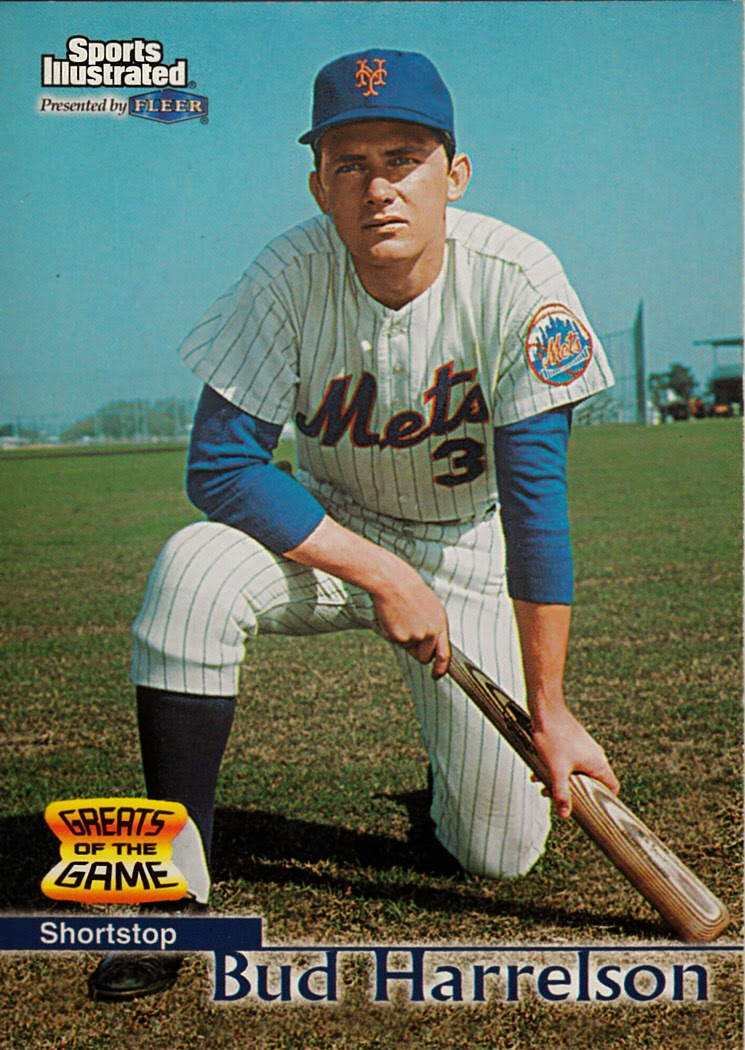 A delivery from the Dime Boxes headquarters means only one thing: I'm in for one helluva time flipping through a big stack of off-the-wall cardboard!

And, as he always does, my good buddy Nick delivered a home run with his latest offering of Mets cards and assorted other set needs, both conventional and otherwise.  You might say that Nick has a knack for finding just what you're looking for, even if you didn't know what you were looking for in the first place.

If the Buddy Harrelson card at the header of this post is any indication, this is gonna be a fun group of cards to scope out!  I have a few Harrelson's in my collection already, but this one is new to my eyes.  And, not only that, it's striking enough to take its place in the All-Time Mets Project catalog.  I mean, it's basically as perfect a cars as you're gonna find.  Fleer was really pumping on all cylinders when it made cards like this. 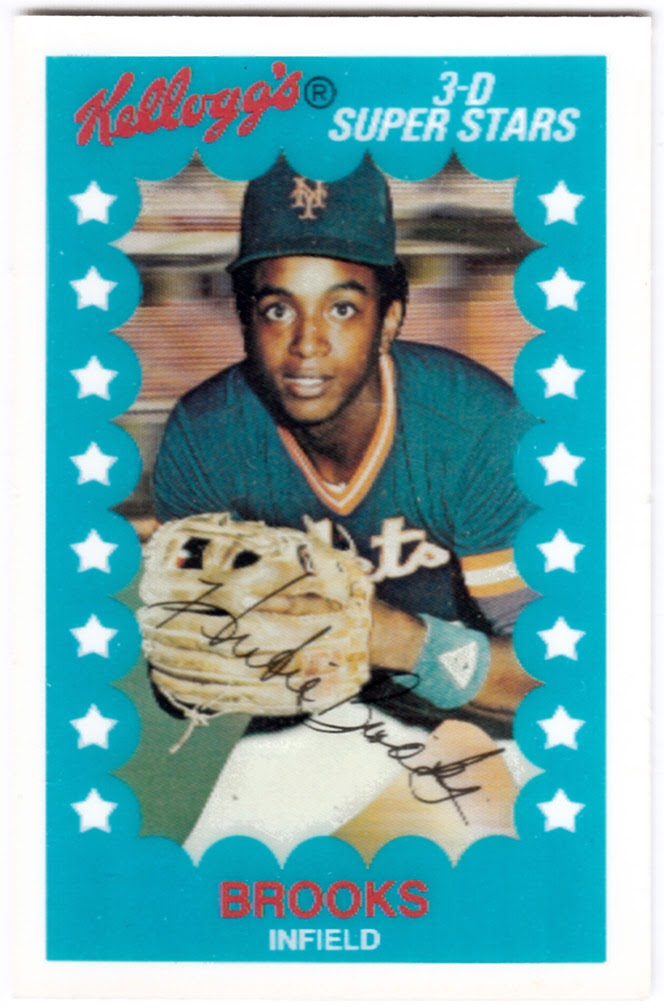 Ya know, I have seen these Kellogg's cards showcased on countless other bloggers' sites, but have never had the occasion to get my mitts on one, much less see one in person.  I wasn't sure how much I'd like 'em in the flesh, but I'm assuredly a fan! 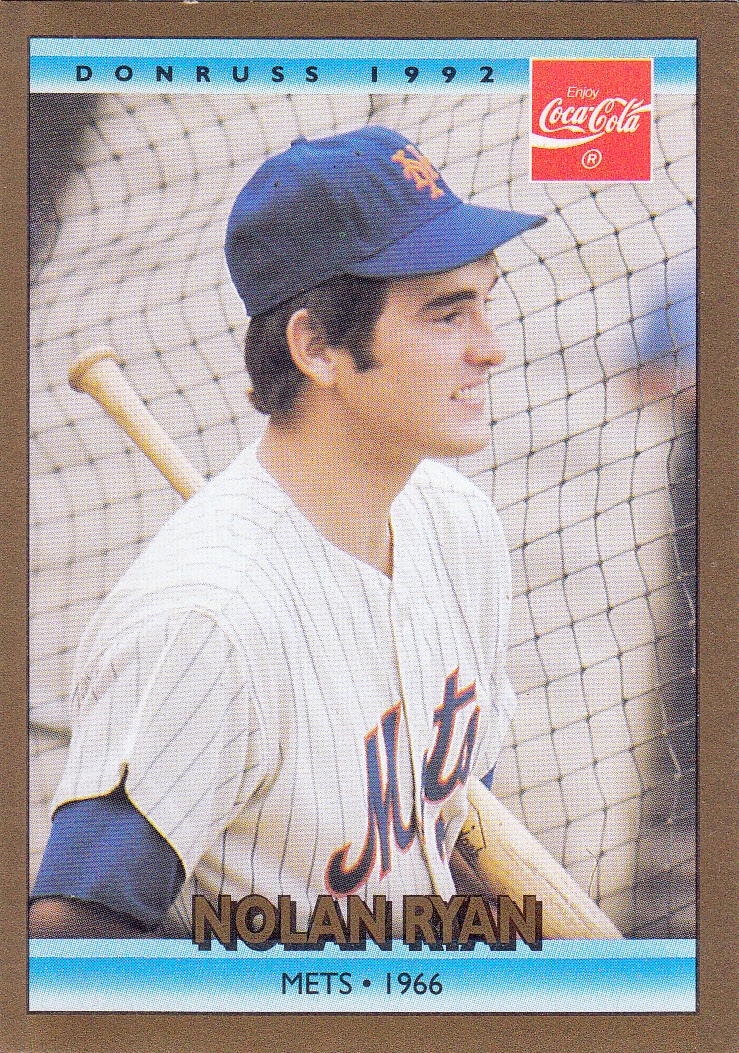 Howsabout an ice cold Coke to wash down those Sugar Frosted Flakes?  Like many of you out there, I'm a sucker for these food/drink issues and pretty much any oddball of the sort.  And, is that a young Srikeout King with a bat lurking around the batting cage?? 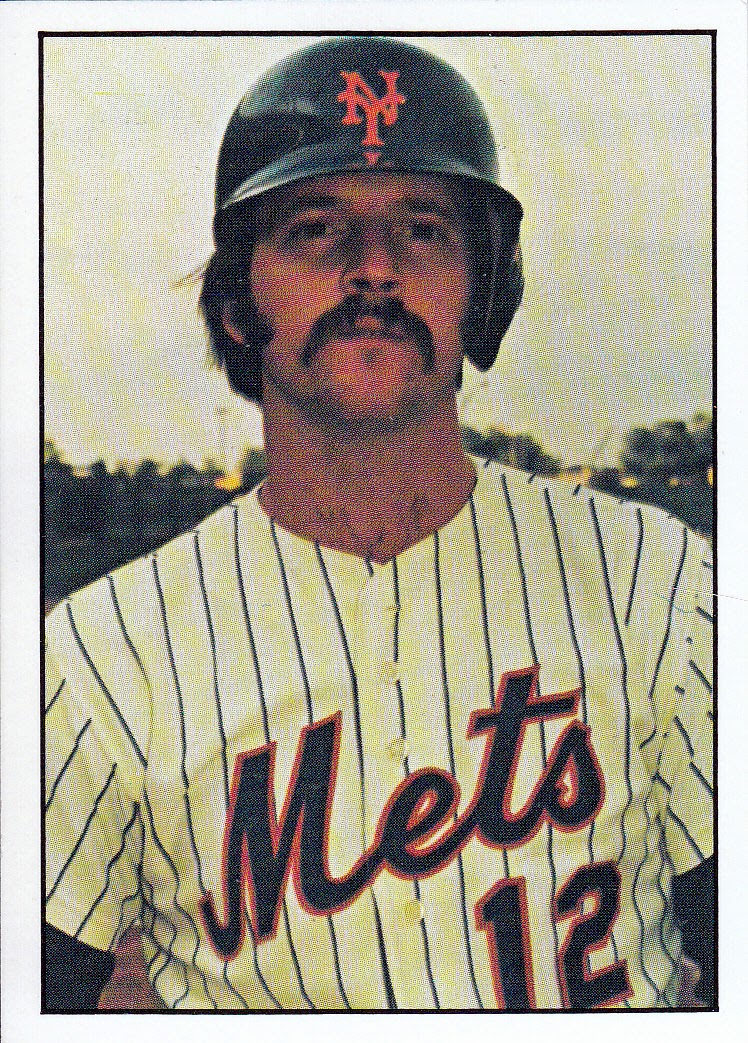 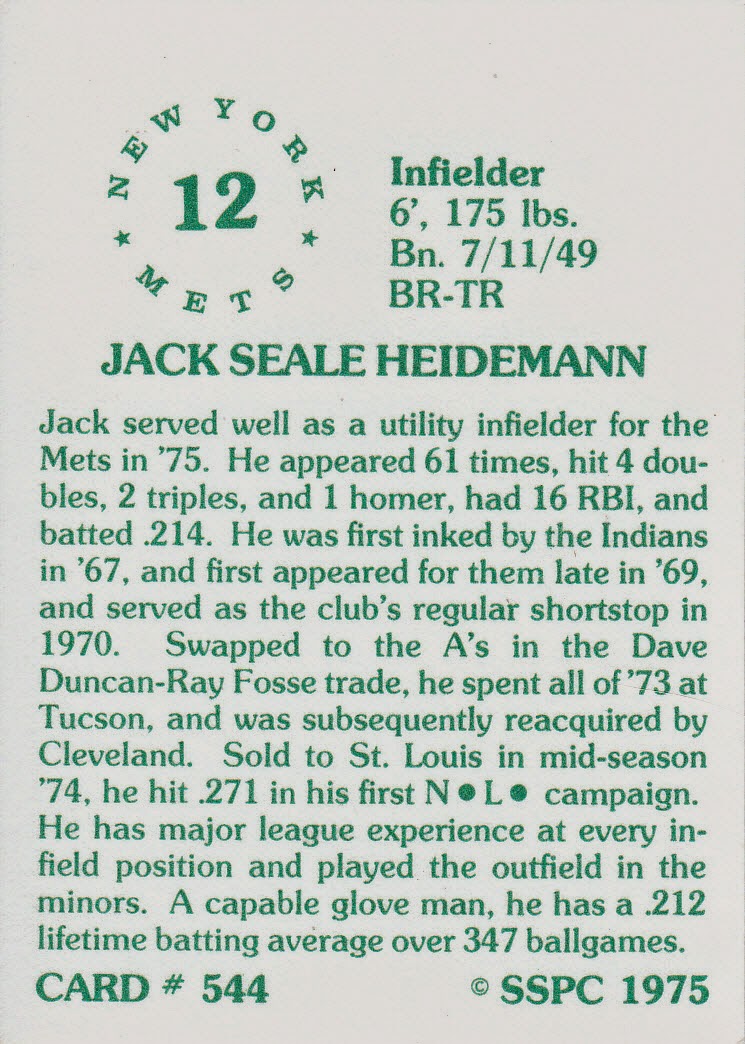 Okay, let's get down to business here.  I was perhaps most excited to find a tremendous smattering of these totally rad 1975 SSPC cards, featuring a bunch of Mets I had barely heard of.  Needless to say, they were on my "want list" for the All-Time Mets Project. 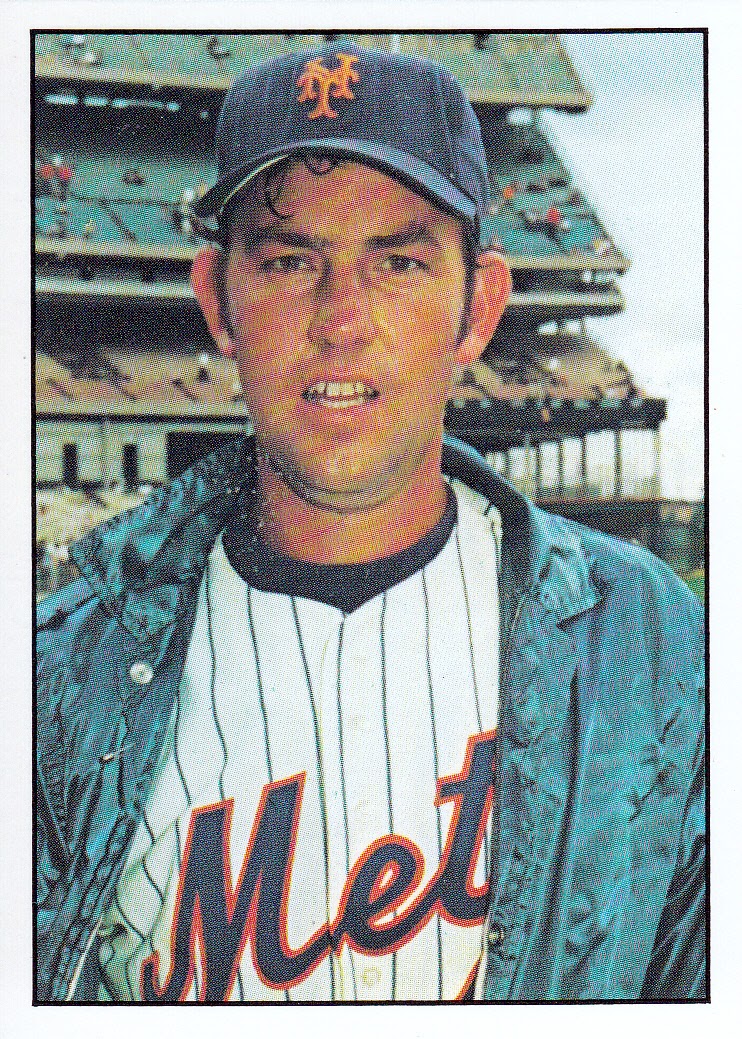 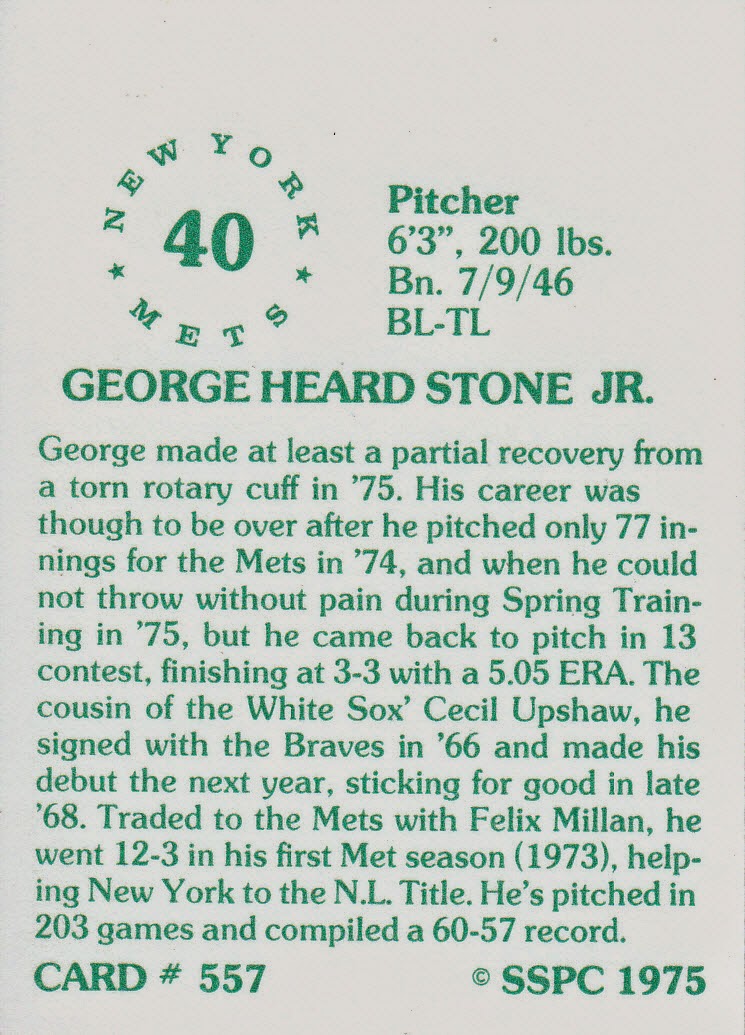 When I see all these cards from the '70s with the old familiar skeleton of Shea Stadium in the background, it makes me miss the place even more than I already do.  I don't care that you think Shea was an eyesore or a dump; it was MY stadium where I grew up watching games and experiencing the magic of big league baseball.  Oh, and I nearly forgot to mention Stone's neato jacket.  So, there. 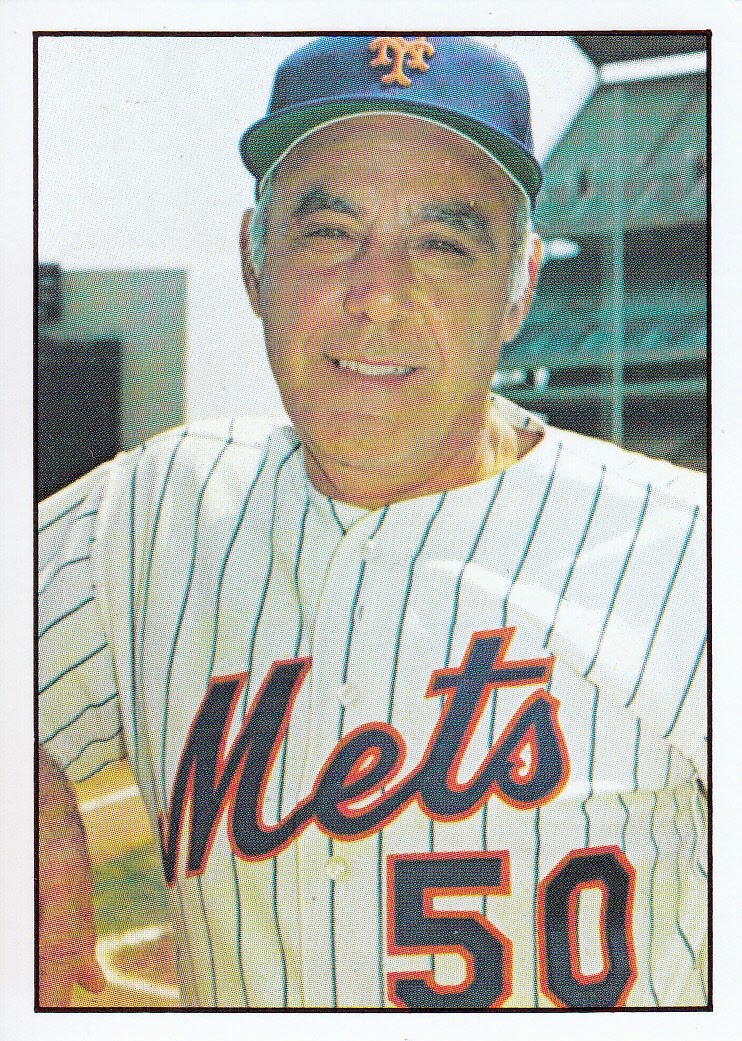 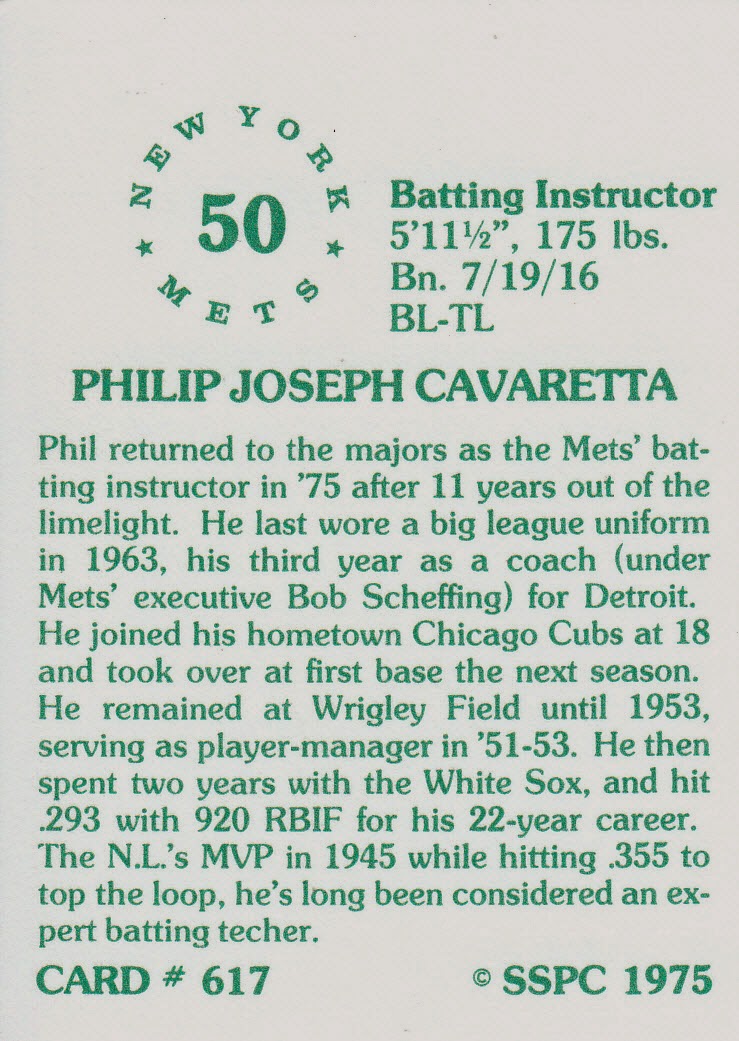 Batting instructors, base coaches, batboys, clubbies, and mascots might not show up on the ATMP checklist, but that doesn't mean that I don't want them!  After all, that checklist is a living, breathing document, and new names can always be added.  I mean, sheesh, had I known coach Phil Cavaretta's likeness was on a card, I surely would have placed him on my want list. 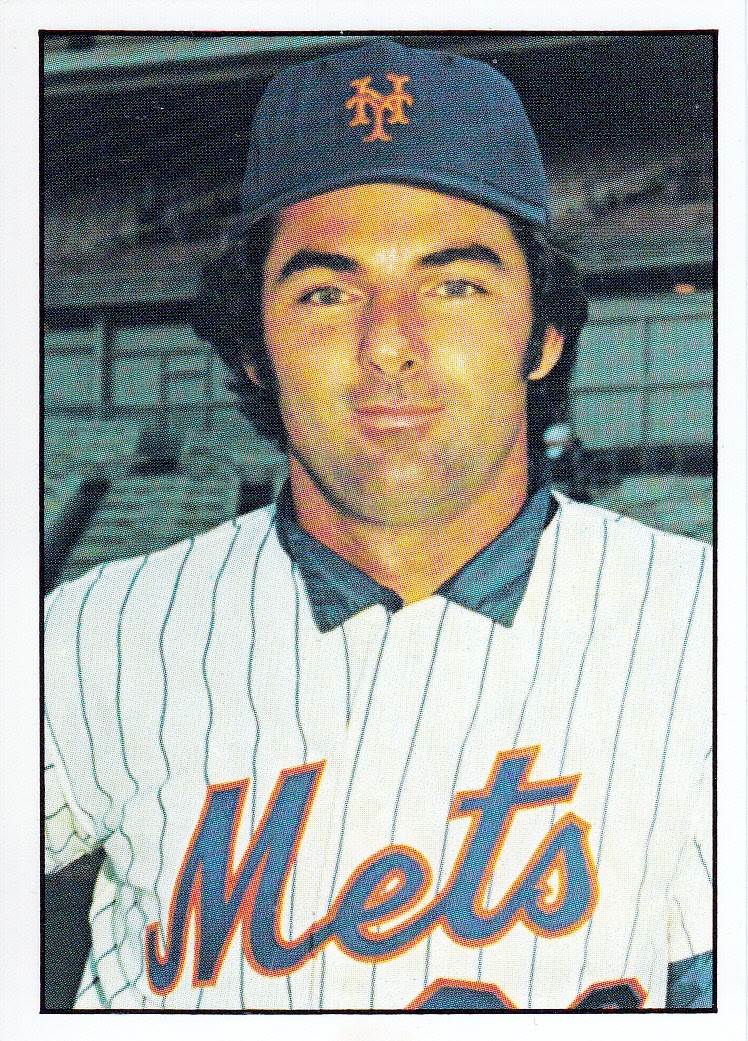 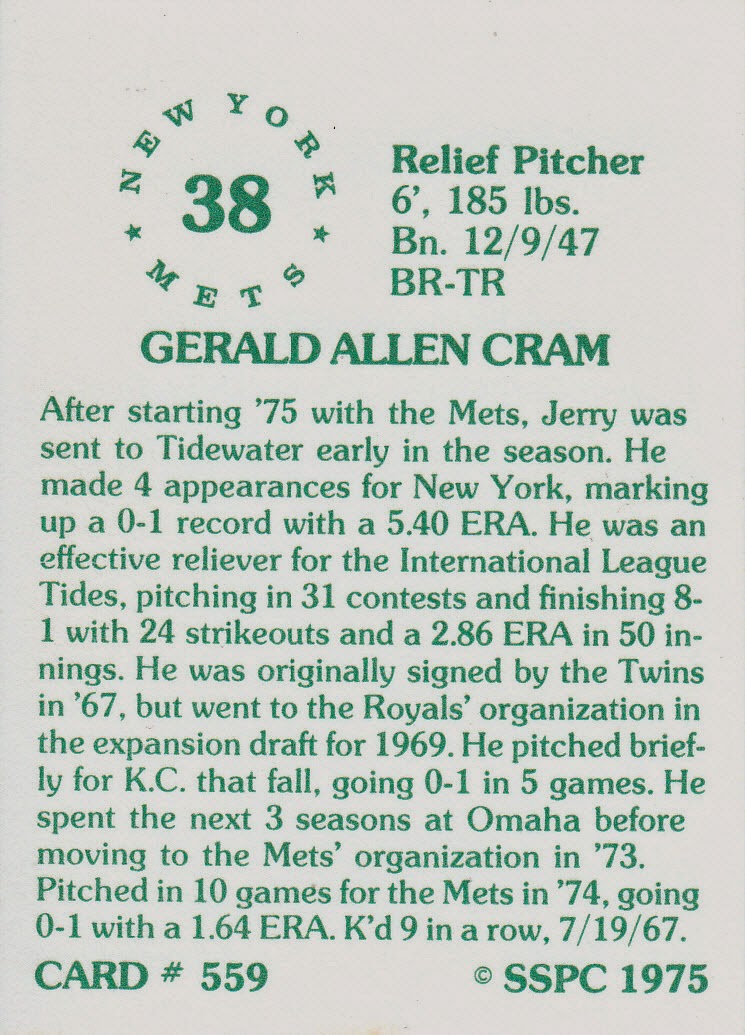 Jerry Cram tossed exactly 27 1/3 innings over two years with the Mets.  And that's it.  Thus, it's not a surprise that he doesn't appear on a Topps card as a Met.  In fact, his only Topps card is one of those "Rookie Stars" split-player cards from the 1971 set--and that was as a member of the Royals.  That being the case, this SSPC card is an even bigger deal! 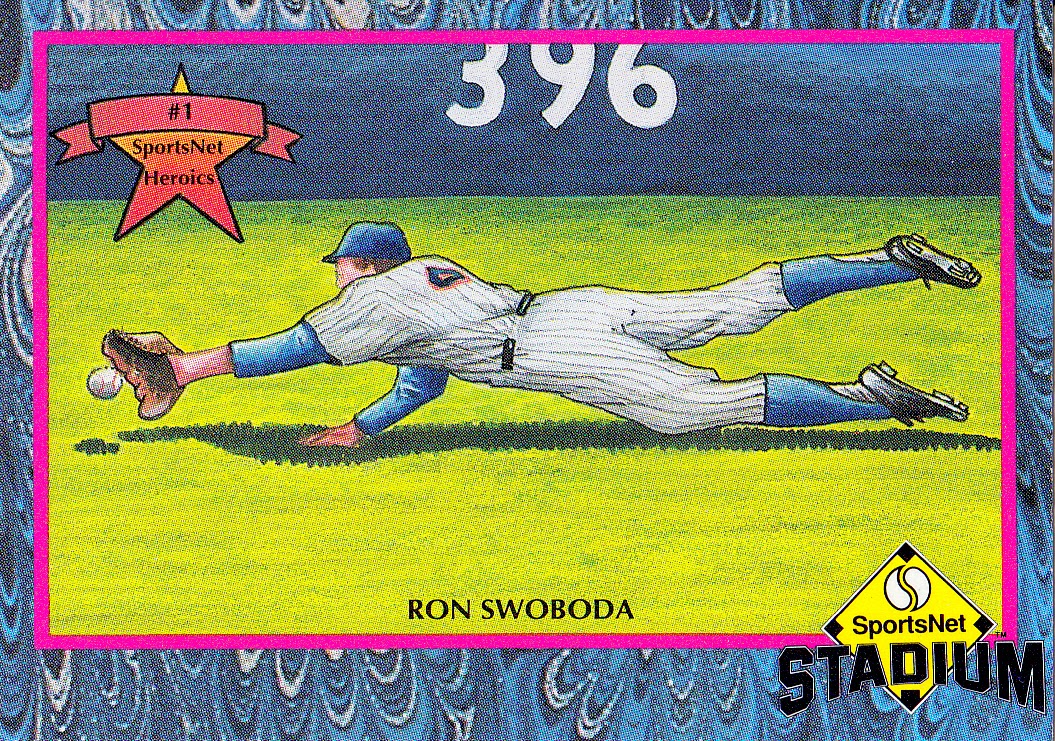 What in the Sam Hill...?  Of course I'm familiar with Swoboda's famous diving catch from the '69 Series, but this card is akin to finding a crop circle.  Where did this come from and how did it come into being?! 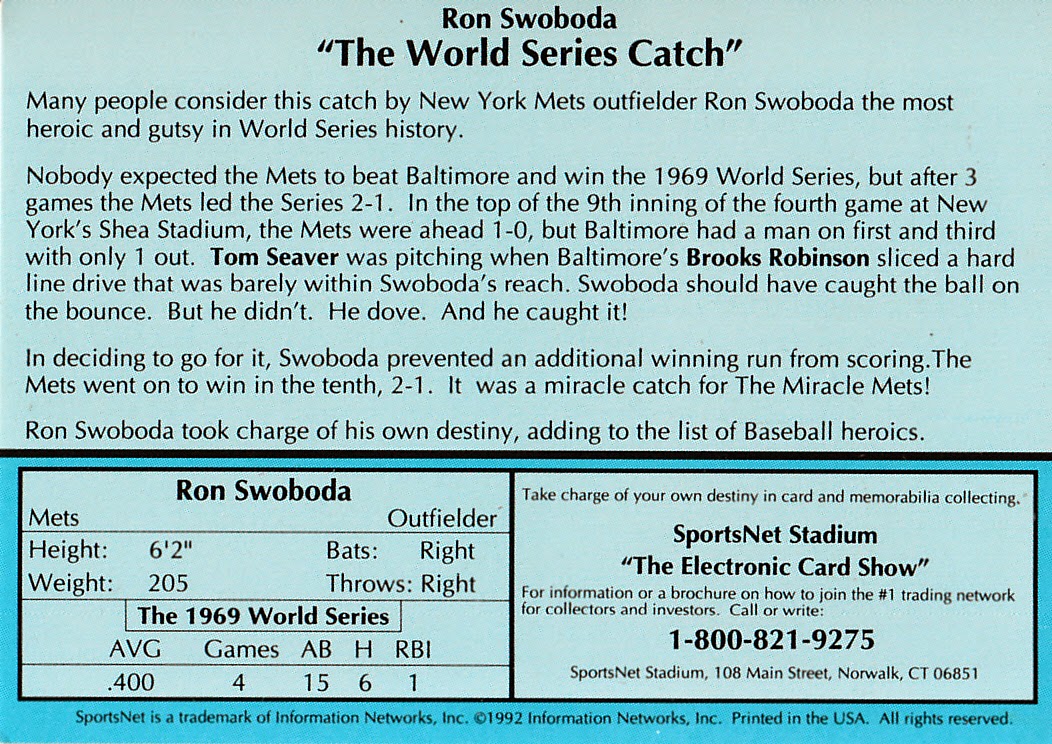 The box on the bottom right alerts us about "The Electronic Card Show" and even includes a hotline number.  The wave of the future, I suppose?  This card is from 1992 and is probably something that I would otherwise have never seen or known about had Nick not uncovered it.

Along those same lines... 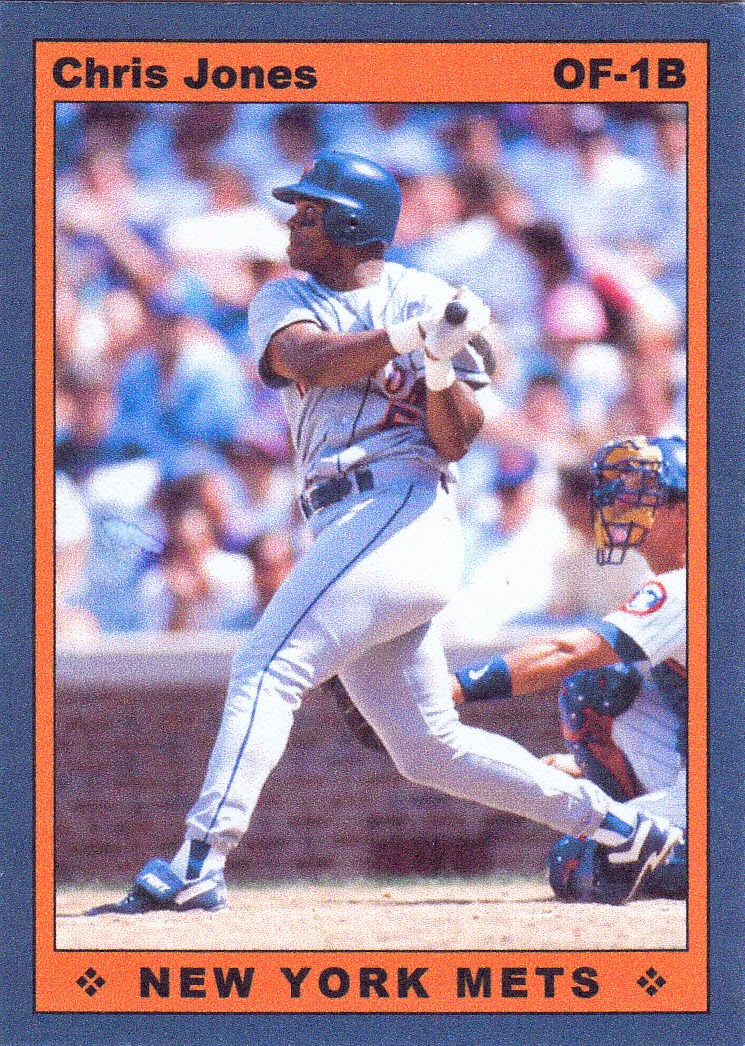 This looks like a homemade card.  Don't mistake me; this thing is tremendous, especially since it's a pretty obscure Met like Chris Jones.  But, if the Swoboda above is a crop circle, I guess this would be, I dunno, sasquatch? 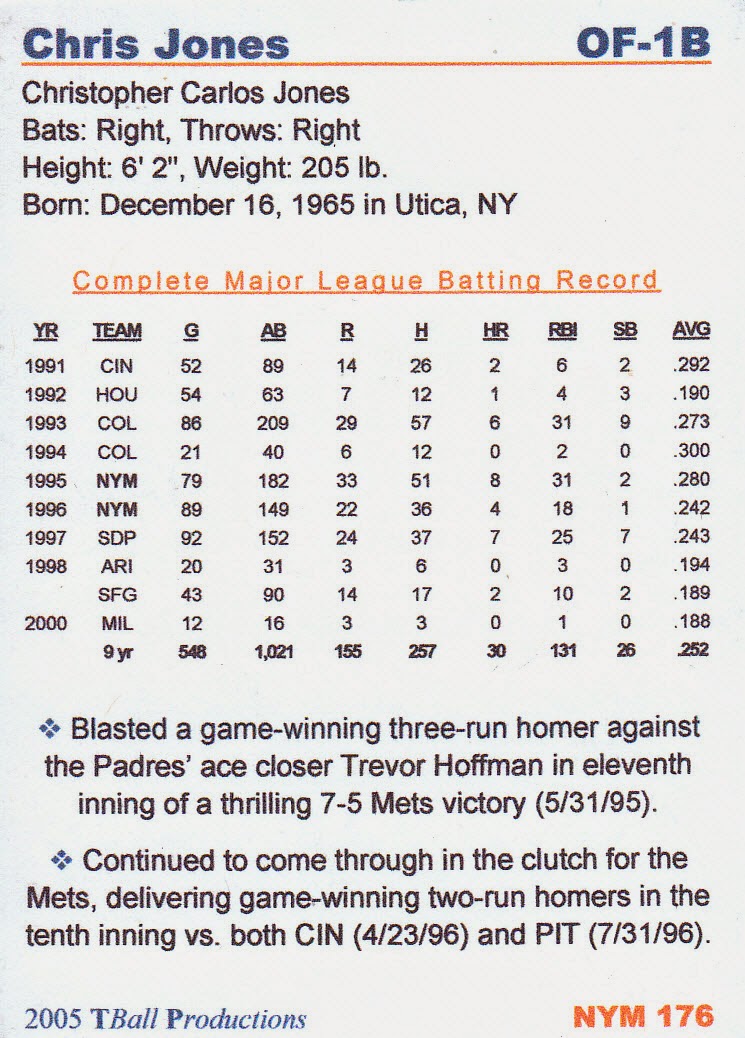 Very interesting: This card was produced in 2005 by something called TBall Productions.  And, why was Chris Jones chosen to be part of the NYM checklist for this obscure set?  I mean, did they also produce Chris Jones cards to represent his time in Houston, Cincy, Colorado, San Diego, Arizona, San Francisco and Milwaukee? Jones wasn't exactly a standout in his limited time in New York or anything.  None of it makes sense, but I think that's what makes it even more enjoyable! 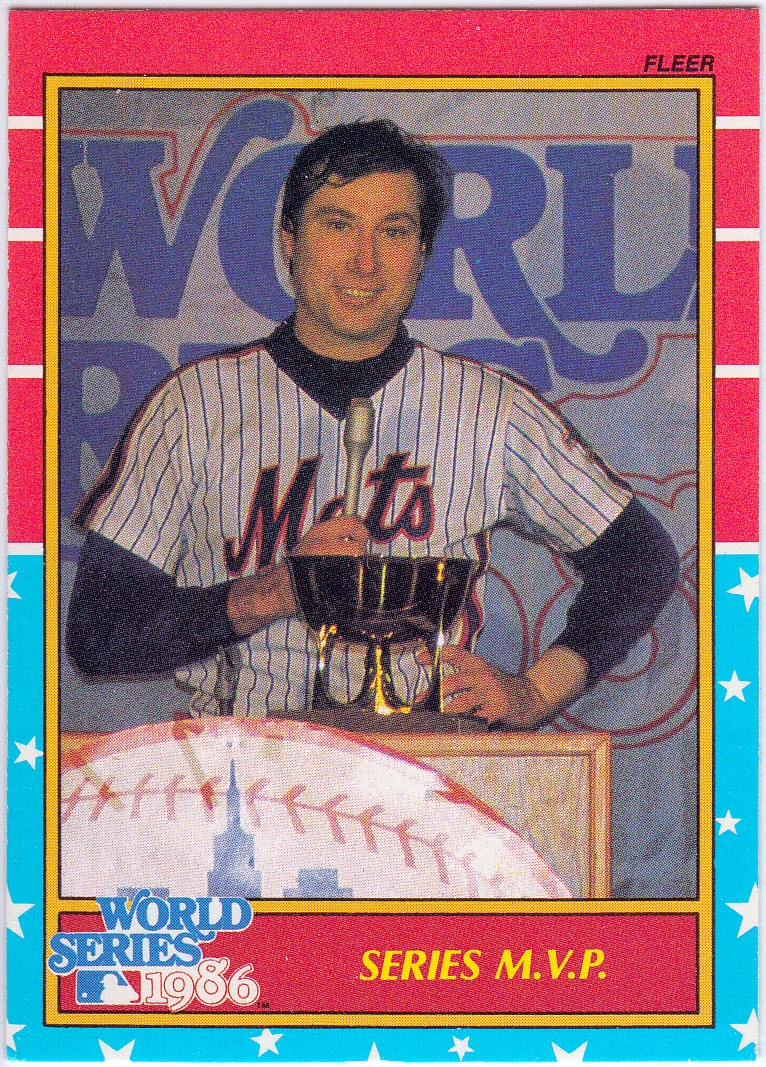 Okay, back to a more conventional brand of card.  But, every bit as exotic.  A trophy, a microphone and champagne-soaked hair: What a time '86 must've been!  Regrettably, I was just six years old when the Mets last won the Fall Classic and I have zero recollection of any of it. 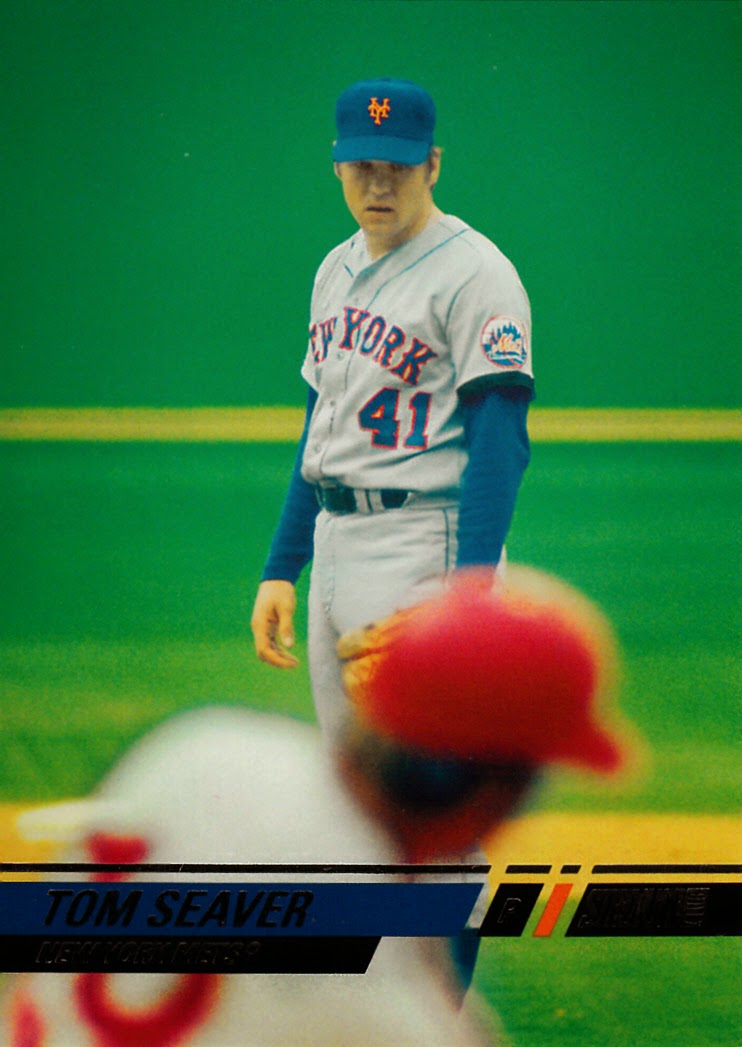 It'll be interesting to see what the rebirth of Stadium Club has in store for us later this year.  That is, if it ever truly comes into being.  The last we saw of the brand--back in 2008--Topps blended in some legendary players into the checklist.  That was fine back then, but I hope they avoid doing the same this time around.  After all, we've already got Archives, GQ and A&G playing that tune. 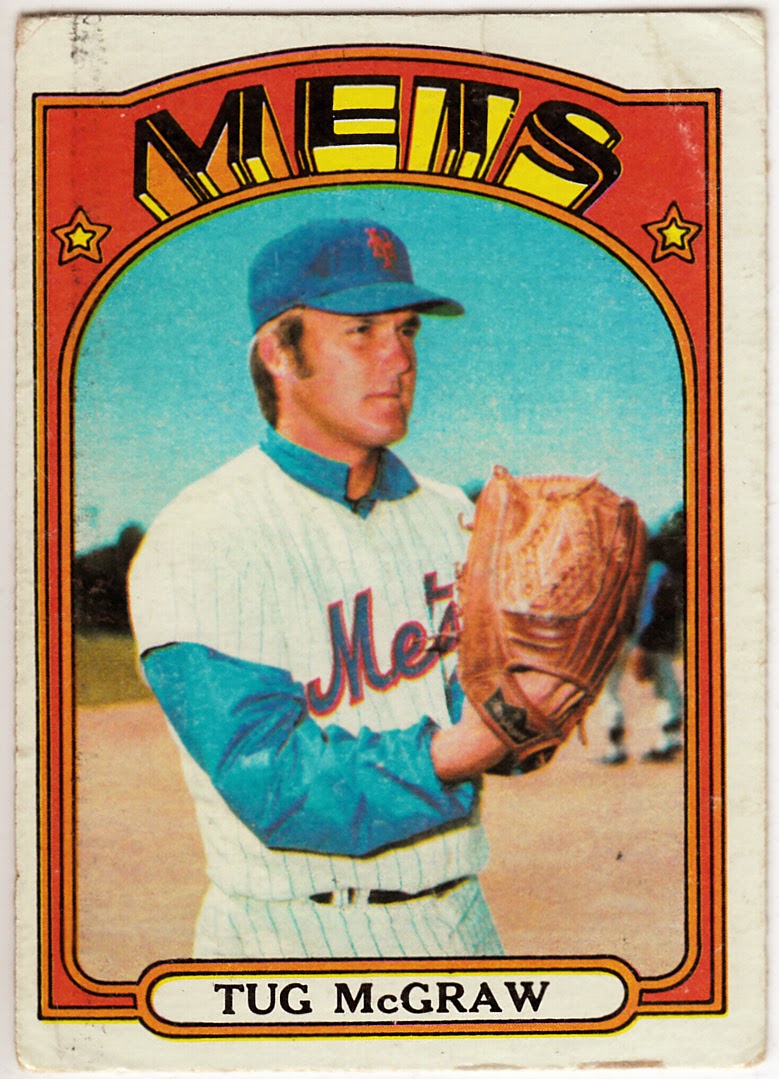 Vintage Tug is always a welcome sight!  I think '72 is a year that is tragically under-stocked in my collection.  As a matter of fact, I think this might just be the first Mets card from this far-out set.  Far out!

But, Nick's card selection is never just focused on a singular area.  So, the fine selection of Mets he included was just the tip of the iceberg.

How about some horizontal highlights? 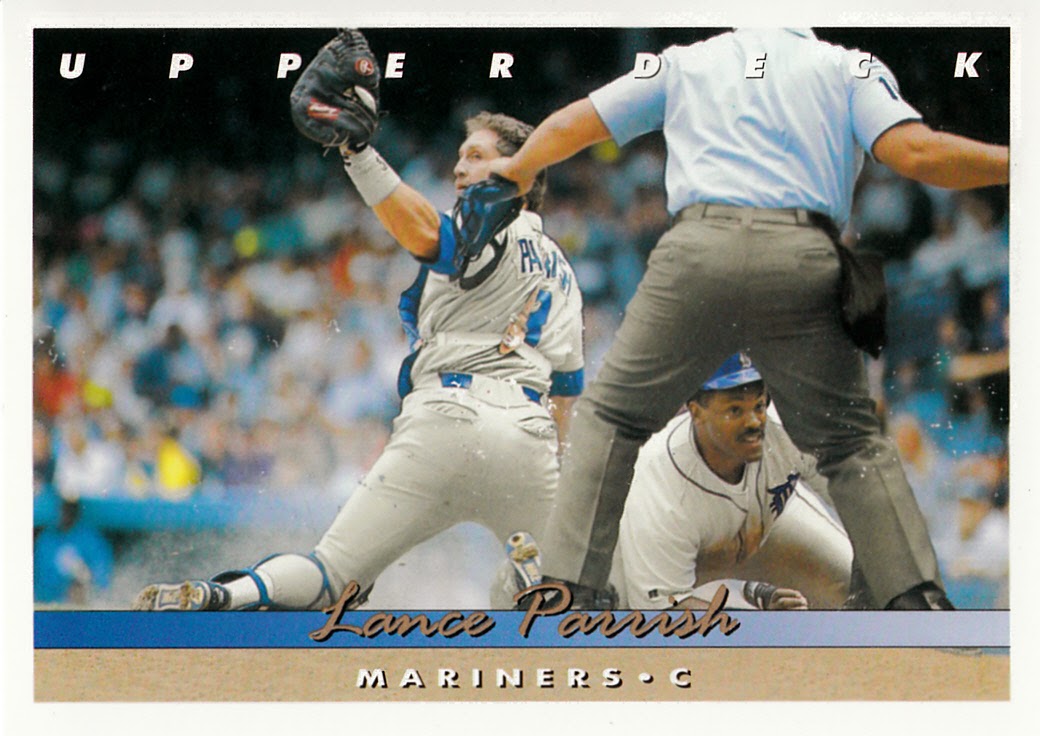 Heck yes!  I saw this bad boy previously on Nick's blog and marveled at it back then.  I'm geeked to have it in my collection now!  I've seen many amazing cards from '93 Upper Deck but none that left an impression like this one did.  Just...brilliant! 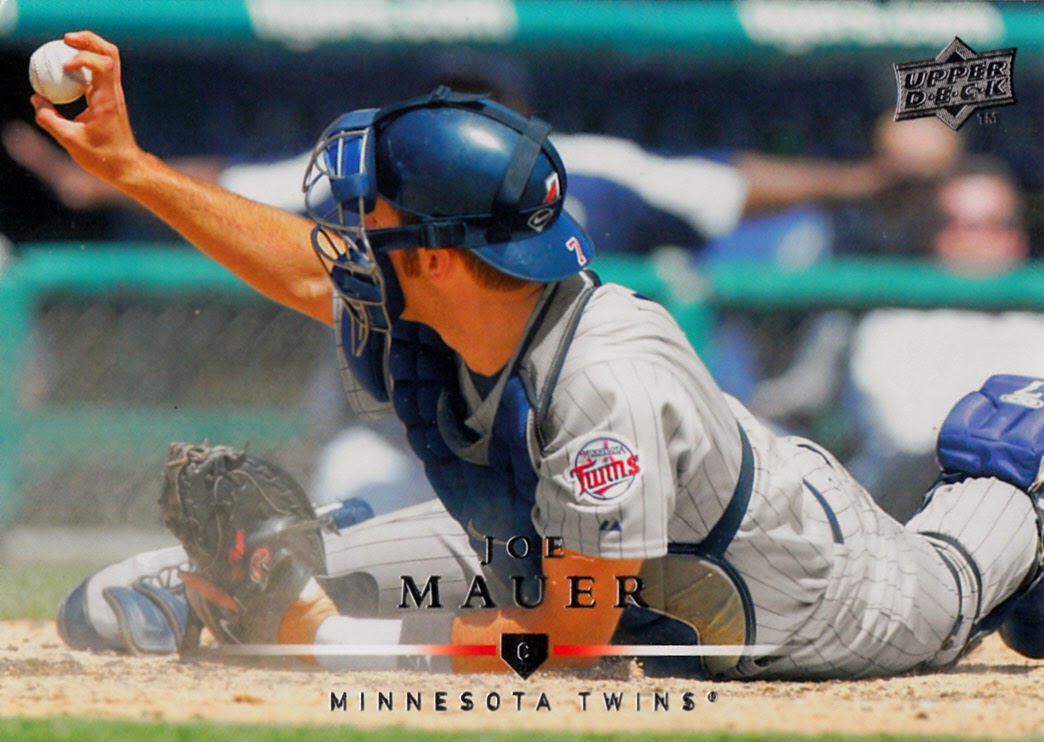 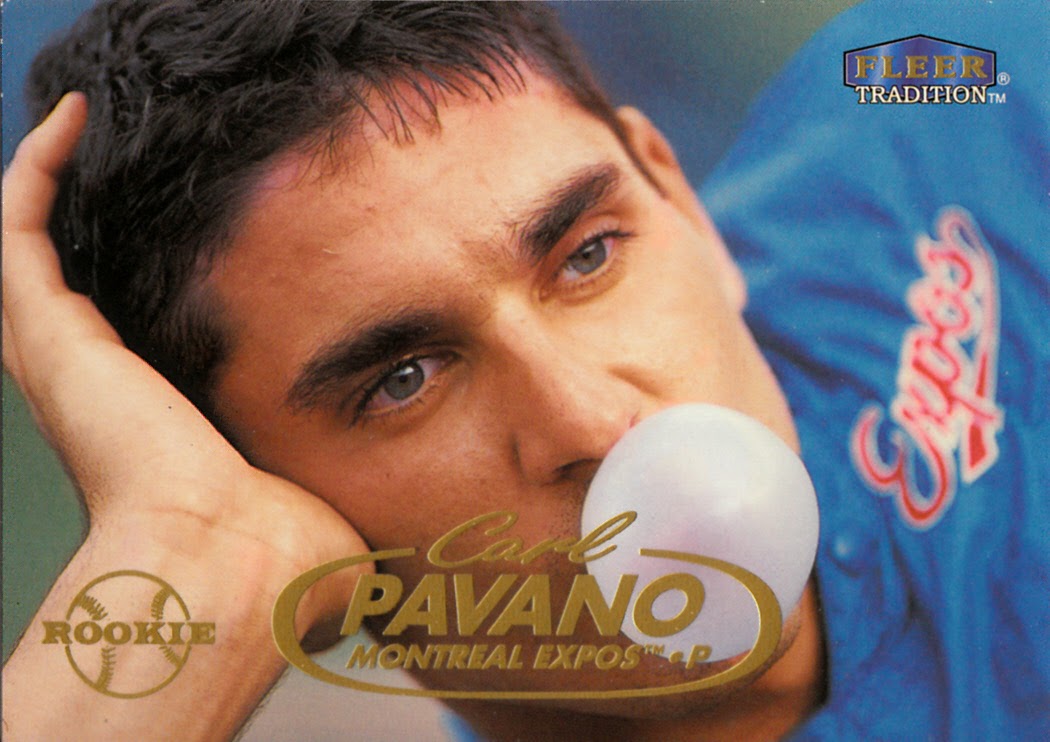 He may be no Kurt Bevacqua, but Carl Pavano's got a pretty good bubble workin' here on his 1998 Fleer Tradition rookie card.  Just staring off into the distance.  Dreamin'. 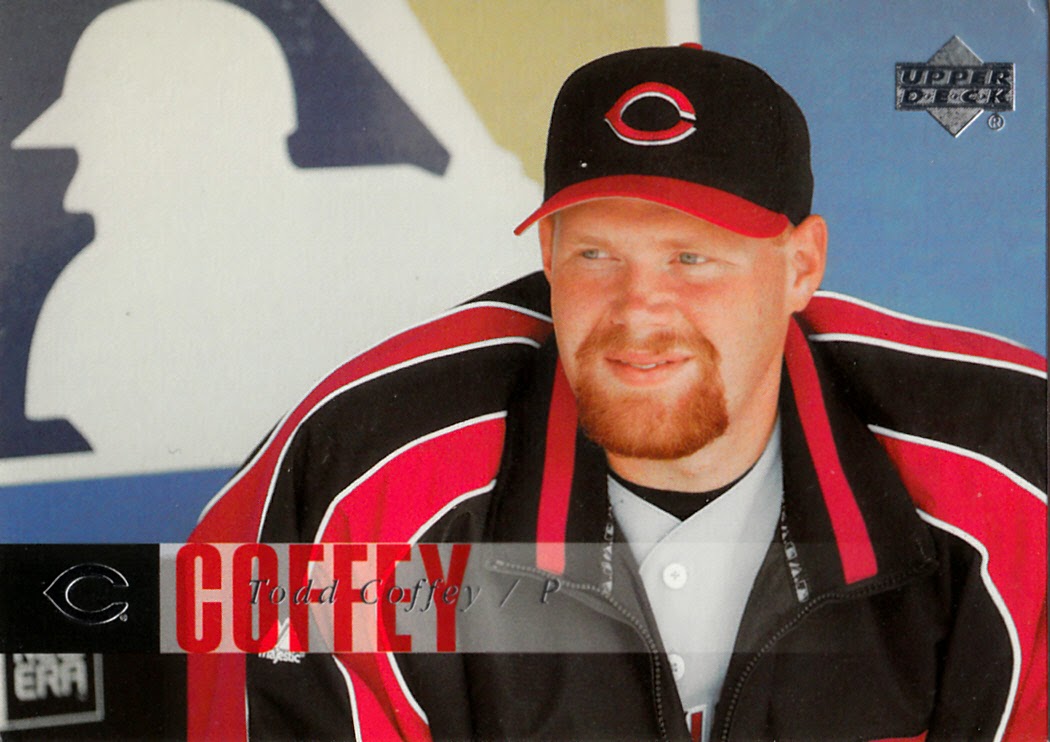 While it's maybe not on par with '93 and '08 in my book, 2006 Upper Deck is a darn good set in its own right. Coffey looks like he's wearing shoulder pads here, as the MLB logoman is creepin' over his shoulder. 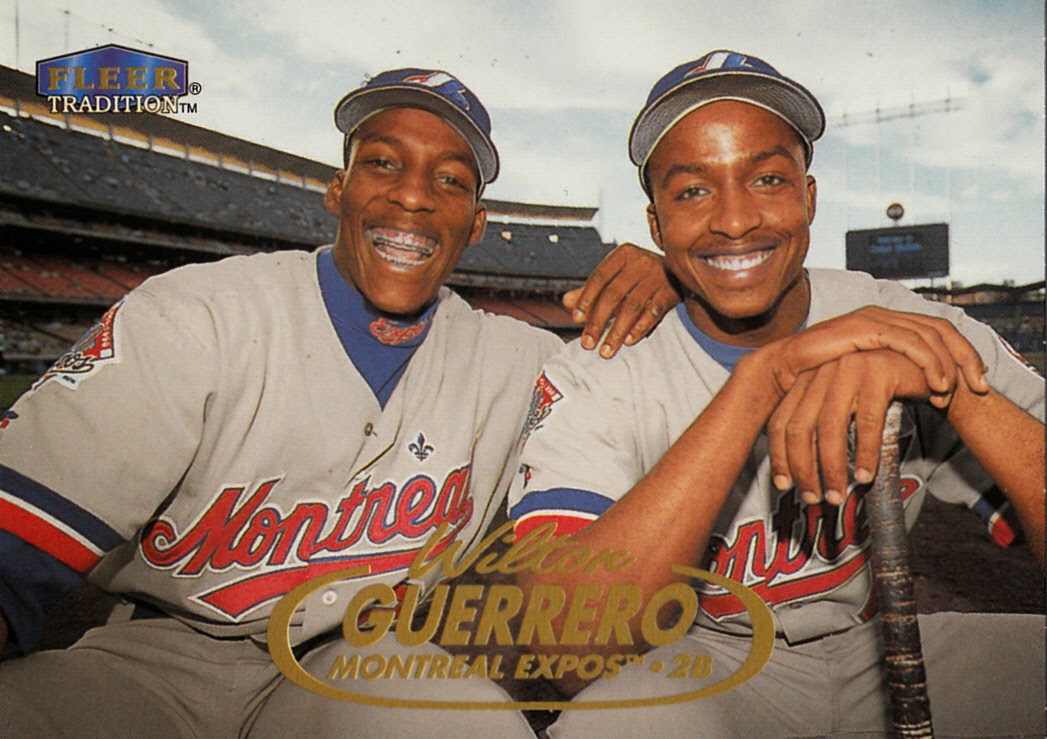 The thing that makes this card great is the fact that Fleer opted to use this sibling shot as the base card for Wilton rather than his more accomplished brother.  Oh, and Vlad's braces.  Those also make this card beyond compare. 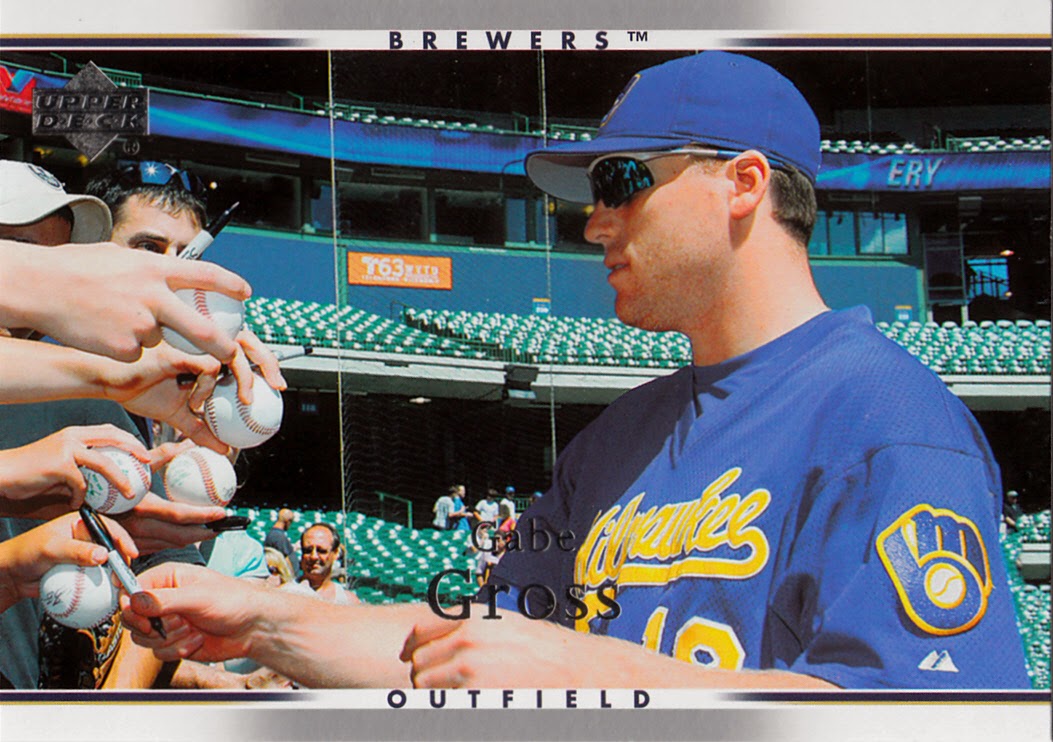 Gabe Gross wasn't the lone Gabe to make the trip from Illinois to Delaware, though. 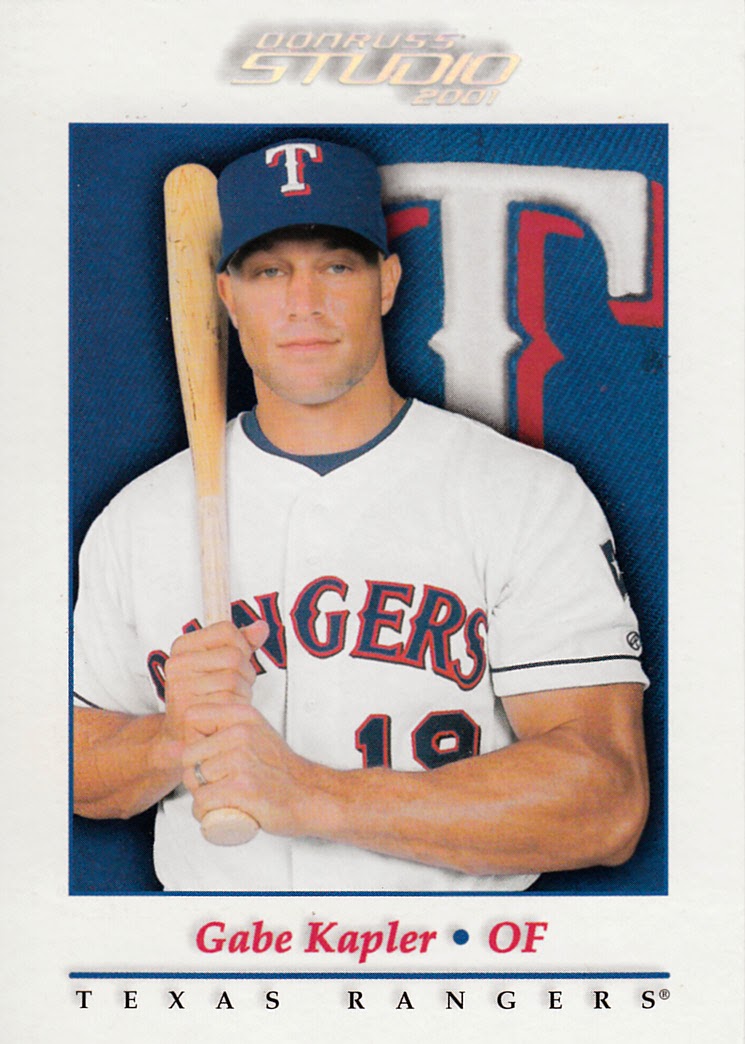 A few really great Kapler cards, including this sharp number from Donruss Studio. 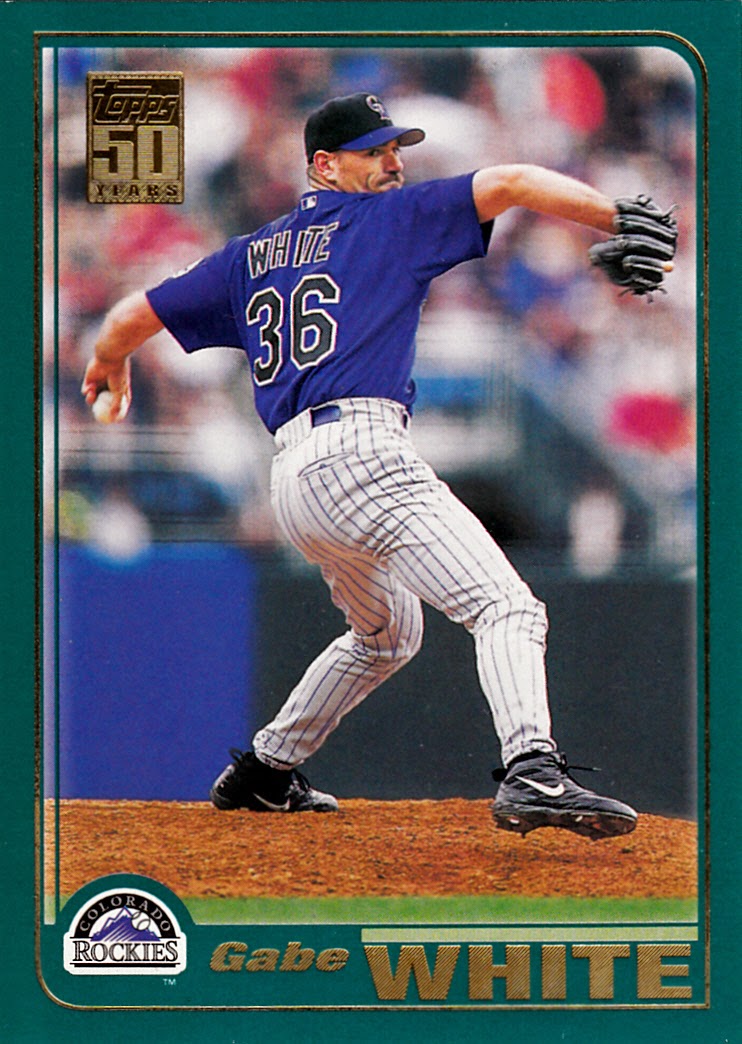 And even an appearance by southpaw Gabe White who played for five different clubs over an 11-year major league career.  He went 11-2 with an impressive 2.17 ERA for the Rox in 2000.

Let's close down the highlights with a card that I love in spite of its flagrant plagiarism. 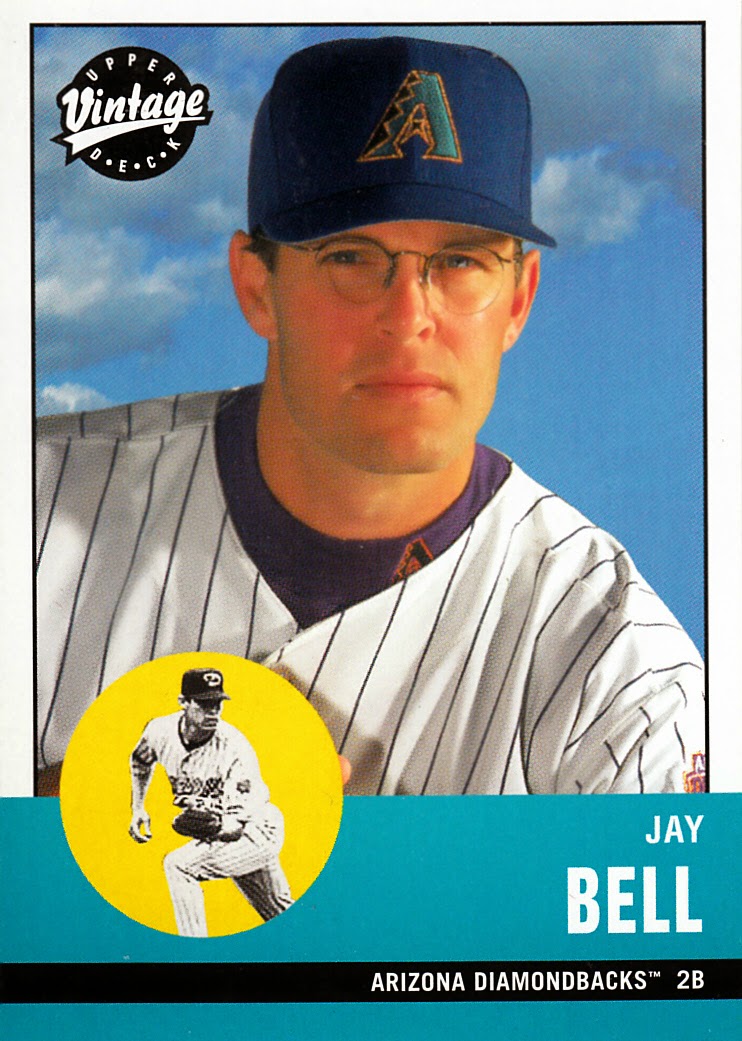 Again, I'm pretty sure I first saw this on Nick's blog a month or two or three ago and was smitten with it since, y'know, I'm a Jay Bell fan and a fellow glasses-wearer.  I can therefore forgive Upper Deck for ripping off the '63 Topps design.  This card is just too swell to hate for any reason.

As usual, it's an honor to trade cards with you, Nick.  Thanks for these awesome additions!