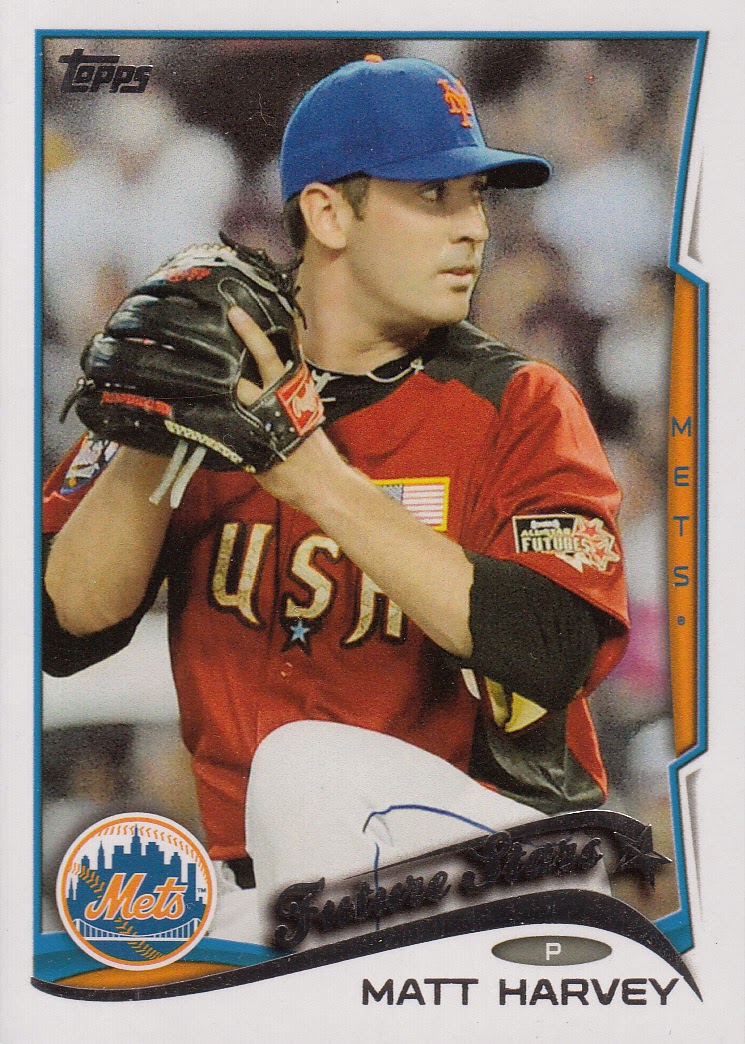 One of the really cool short print ideas Topps had for this year's Series 2 issue was to select some of the game's young superstars and use a photo from their past appearance in the MLB Futures Game.  One of those young stars is Matt Harvey and here's what his SP from Series 2 Topps looks like.  It's a supremely awesome card of the brash right-hander who took the Big Apple by storm last year before succumbing to the dreaded TJ surgery.

I had been eyeing this thing up on eBay for quite some time, but I don't have to do that anymore since my good buddy Shane (Shoebox Legends) pulled this bad boy from a pack and sent it my way.  A truly awesome gesture from a guy who's all aces in my book!

(By the way, in case you're interested, Harvey faced one batter in the 2011 Futures Game in Arizona and retired him.  The 1/3 of an inning earned Mr. Harvey a save for Team USA since it was the final batter of the game.  Oh, and his manager on that day: Mike Piazza!)

Along with the Harvey SP, Shane provided me with a smattering of Mets for my ever-growing collection...

I believe the Alou and Fernando will be calling the All-Time Mets Project a home, as both cards/photos top whatever I've already got for each player.  Nice!

And, Shane always does well to dig up some extraordinary horizontal cards for my other pet project, the Horizontal Heroes frankenset... 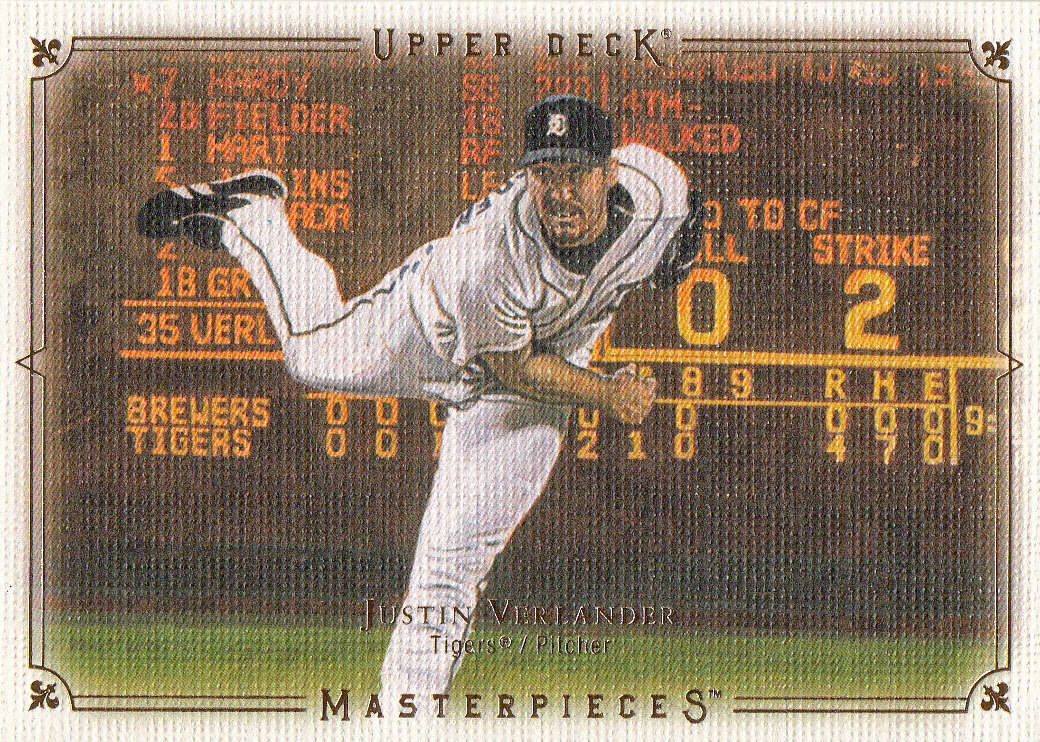 Rightfully named, this Masterpieces Justin Verlander is a thing of beauty! 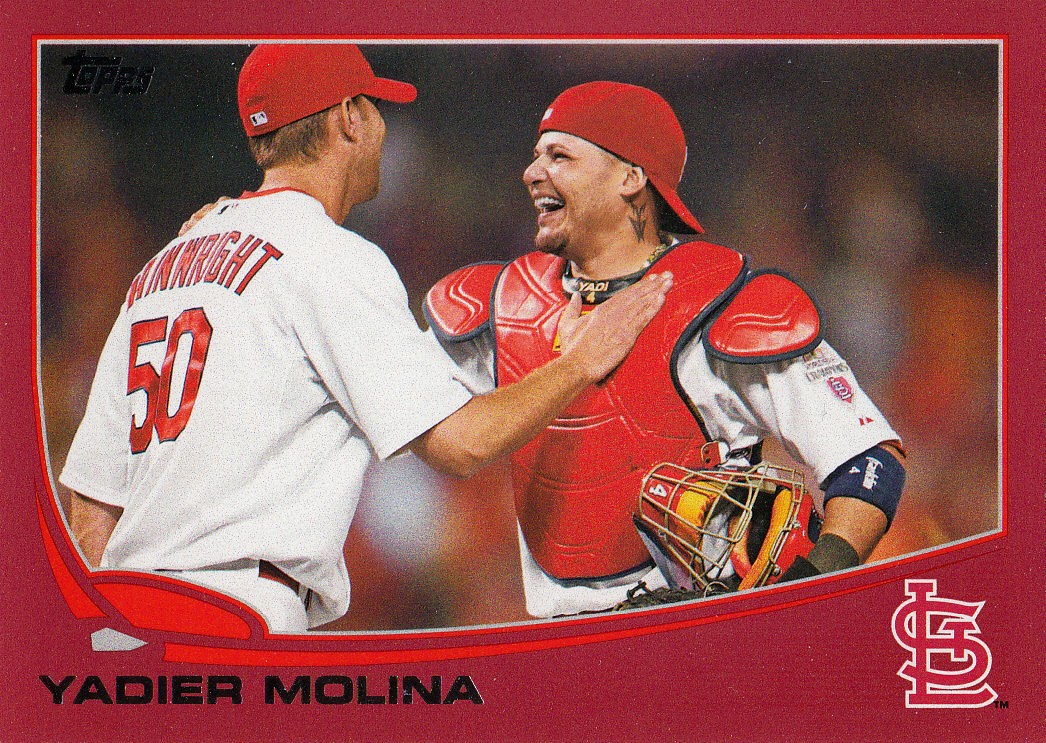 This one is a "must" for the ol' frankenset.  A red parallel of a Redbird, and one of the best photos from the 2013 Topps catalog.  I've already got a certain card penciled in for the No. 4 slot, but this one bumps it right on out of there. 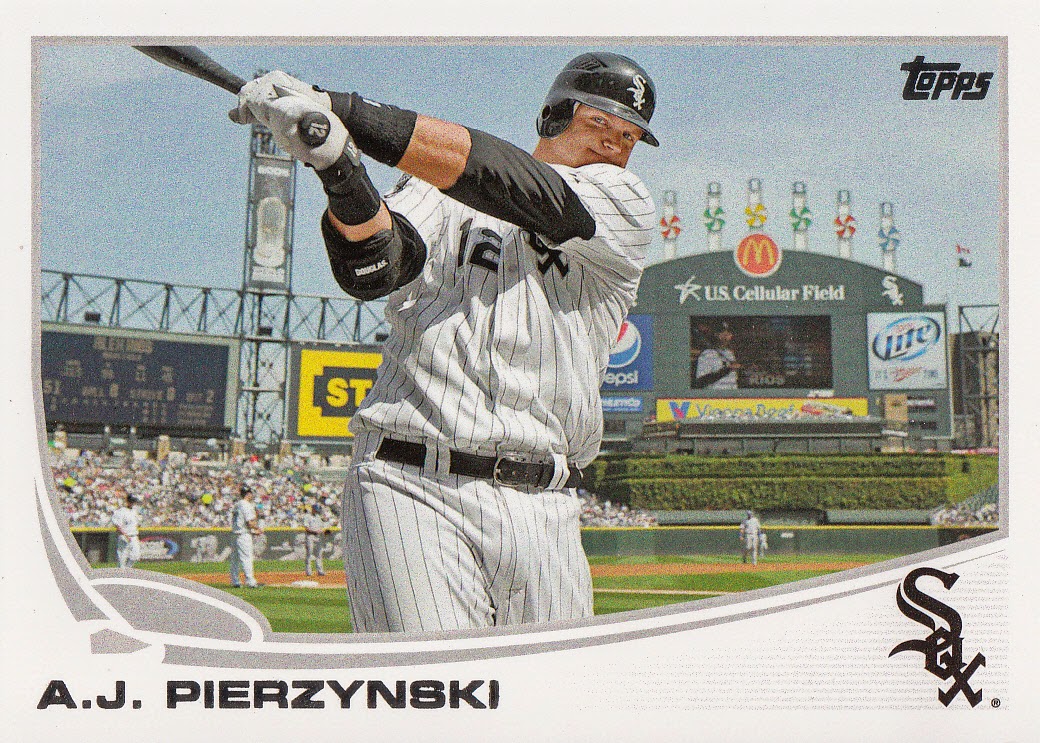 Similarly, the No. 12 position is also booked up, but how can I not include this piece of cardboard art?  In my opinion, this Pierzynski card is the best of the best from 2013 Topps.  That being said, it's a slam dunk inclusion! 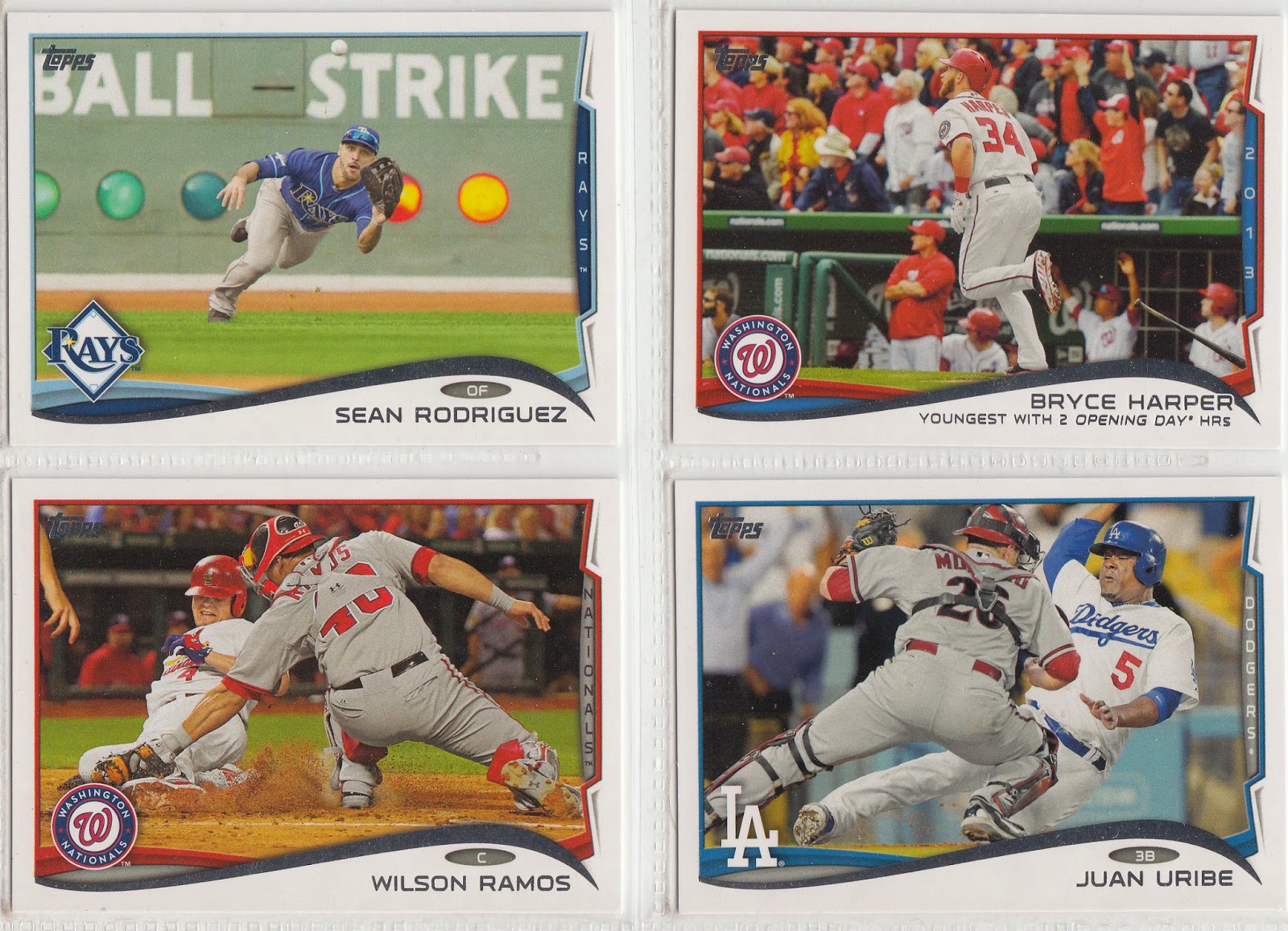 I haven't purchased much 2014 Topps flagship this year because money's tight and I plan on putting the factory set on my Santa Claus list anyhow.  But, the cards I've been sent or have stumbled upon at shows have really impressed me.  I think I've done a full 180 on '14 Topps.  As a matter of fact, I think it might be my favorite design of the decade thus far (but I'll save that debate/discussion for a future post).

Lastly, a trip down a memory lane... 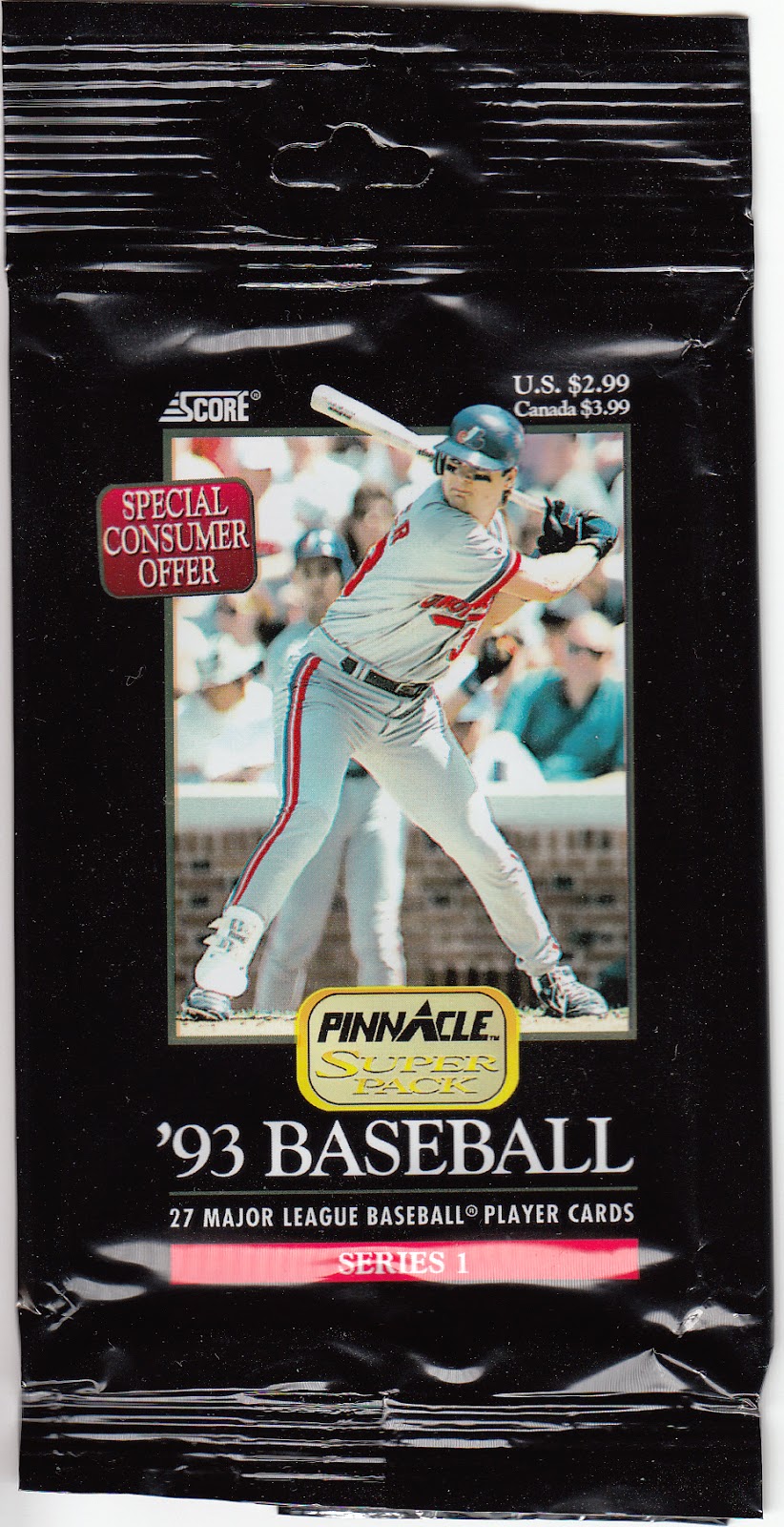 I don't know where he gets 'em, but I've been fortunate to have Shane hook me up with a few of these unopened '93 Pinnacle "Super Packs" which feature 27 cards.

Let's see a few highlights from this particular fat pack, shall we? 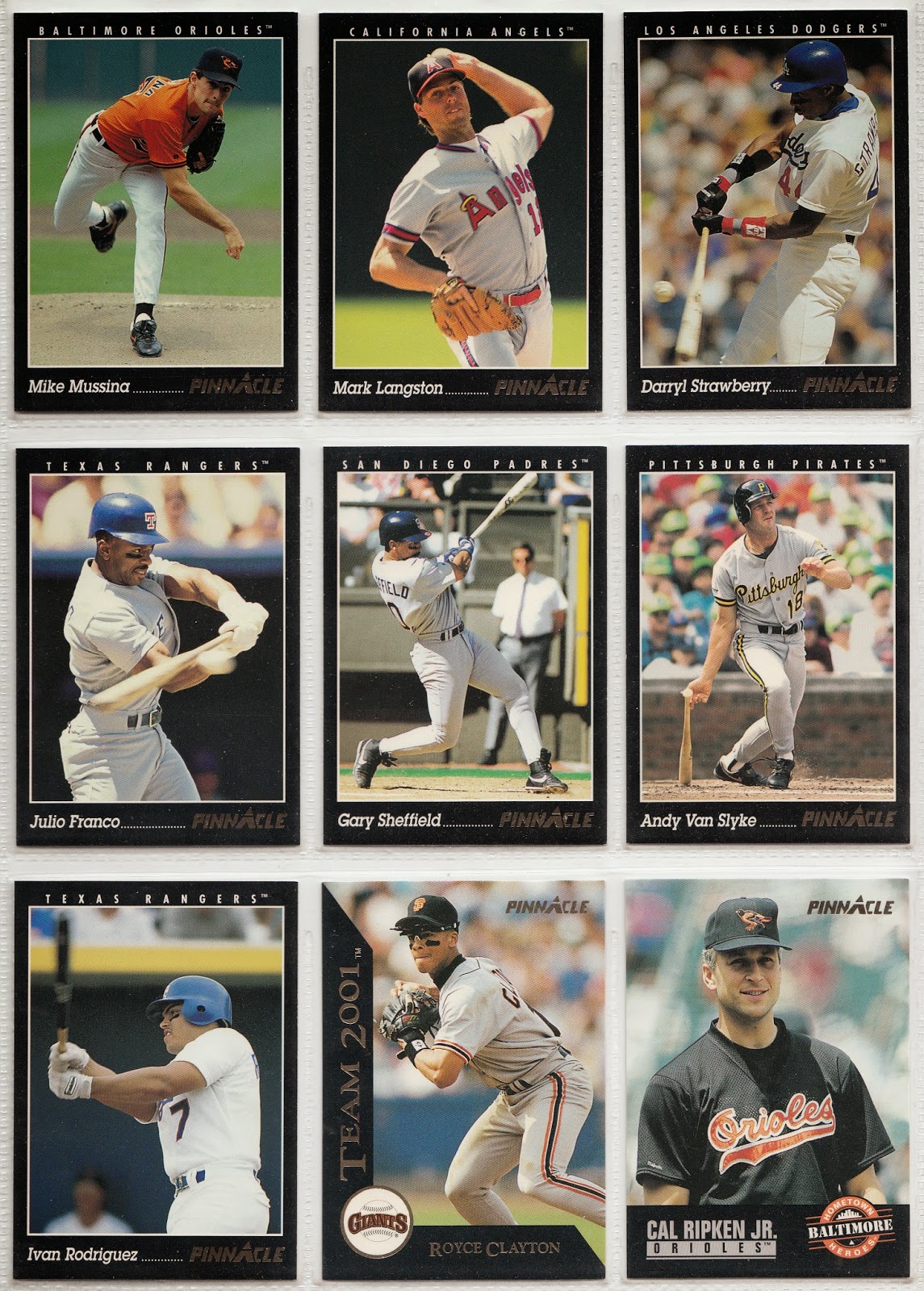 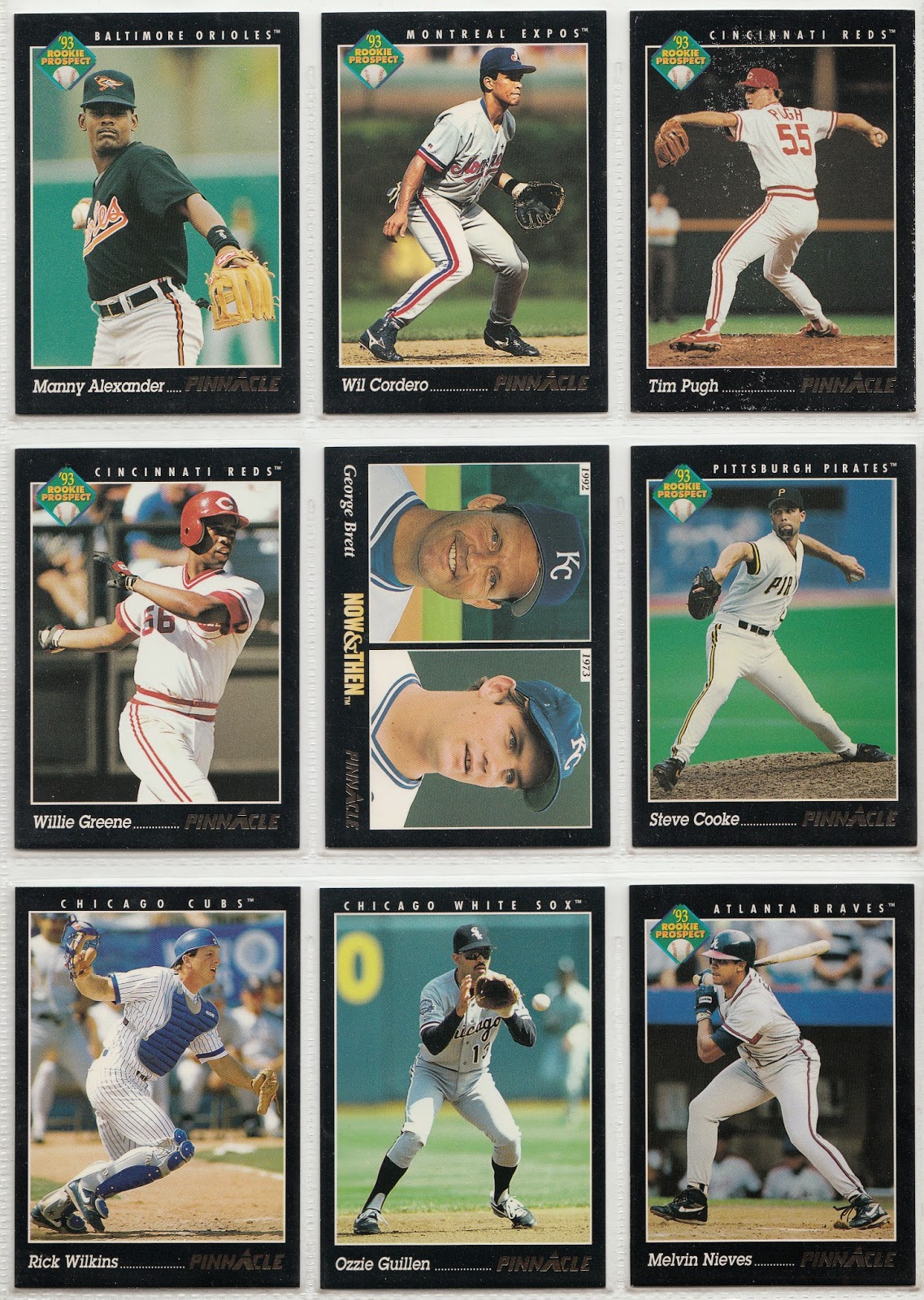 All in all, a pretty decent pack, I'd say.  The Cal Jr. and Brett subset cards are good hits plus we've got some established stars like Darryl, Sheff, Pudge and Mussina.  The Team 2001 selection is kind of a dud, but that's what you get when Pinnacle tries to predict the future!

As always, thanks for keeping me in mind, Shane!  I look forward to future exchanges!