Let's jump back into our Four Topps feature, which examines a certain card number from each of the four Topps sets that formed the foundation of my childhood collecting days: 1987, '88, '89 and '90.  We'll take a look at each card and declare a winner from the lot.  Sometimes it's tough, sometimes it's easy.  Sometimes it's pretty, sometimes its a train wreck.  But, it's always a fun time!

[Ed. Note: If you're offended by the Cleveland Indians' logo, look away or scroll down.]  Here we have right-hander Frank Wills, who appeared in just 154 games over nine big league seasons.  He made three main Topps sets and one Traded set during his career.  His rookie card (sans mustache) was part of the '86 flagship set, and his next card wouldn't appear until 1990's Traded edition.  Hey, Stat Man:  Went 4-4 with four saves in 26 games for the Tribe in 1986.

I really loved this card as a kid.  For no particular reason that I can remember or pinpoint.  It's just one of those things, I guess.  This one marked Terry's first appearance in a 792-card Topps checklist.  But, his true rookie was part of the '87 Traded set.  Hey, Stat Man:  Socked 16 homers for the A's as a rookie in 1987.

Far be it from me to chime in on this matter when so many others have done it so much better, but when are the Padres gonna bring back brown??  I feel like they have zero identity with the color scheme they're trapped in these days.  Anyhow, I more readily associate Ready with the Phillies (sorry for the pun).  Fittingly, this would be his last Topps card as a Padre, as he was included in the '89 Traded set wearing his Philadelphia best.  Hey, Stat Man:  Batted .301 (22-for-73) with two homers and nine RBIs for S.D. during May of '88. 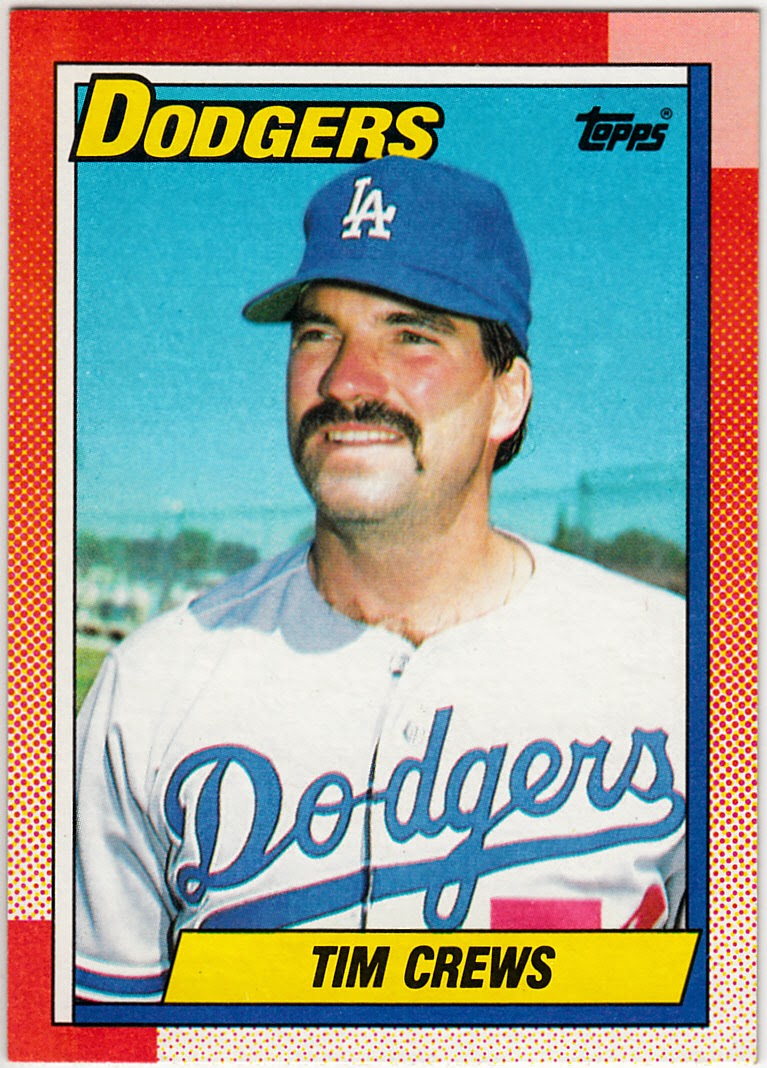 The red border on this card, coupled with the yellow font and accent block, really don't work at all here.  Way too much contrast with the classic Dodgers uniform.  Topps should've been mindful to avoid this, but what can you do?  It was 1990 and crazy color combos were the thing, I suppose.  In case you're interested, Crews stayed true to his 'stache on every one of this Topps cards.  Hey, Stat Man: Worked around two hits and a walk to record his lone save of the '89 season, April 9 at Atlanta.

And the Winner Is:  It's the '88 Steinbach for sure.  I probably don't love it as much as I did when I was seven or eight years old, but it's still got it.  Honorable mention to the '89 Ready.