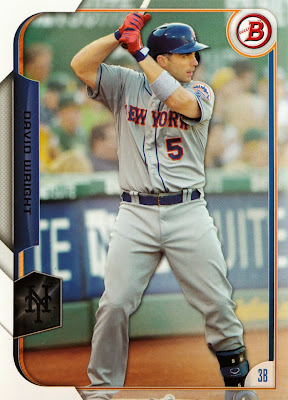 After years of misses, I'm here to assert that this year's design for the Bowman base set is a real hit!

In particular, the last four years or so have been a complete snore.  Worse than that, they've just been downright bad relative to some of their prior handiwork.  Uninspired, to say the least.

Now, I know what you're thinking: Mark, Bowman has never been notorious for exciting or attractive base card designs.  While that's true--and, yes, I remember 1990 Bowman among others--it would nonetheless be reassuring to know that head honchos at Topps cared just a little bit about putting forth a handsome product for their Bowman line every so often.

And so we arrive at this year's output, which, as I alluded to earlier, is quite appealing.  Very refreshing compared to the humdrum white-bordered designs over the past few years which succeeded an equally banal stretch of black-bordered themes.  At the same time, there are enough elements present to remind you that you've got a Bowman card on your hands.  You know what I'm talking about: the faux-futuristic computer-y text boxes, abrupt angles and rigid fonts. 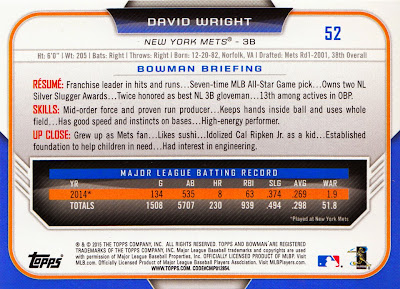 I think this is probably my favorite Bowman design since 2005.  There have been a few others sprinkled in the interim that I didn't find obnoxious, but '05 stands out as a year I really admired.

As for the retail release, I finally tracked down some new Bowman at one of my local Walmarts.  In a hanger box, no less.  So, in addition to single packs, blasters and racks, I guess Topps will be releasing all of their 2015 card lines in these type of boxes?  Whereas flagship used to be the only one to get this treatment, Bowman joins Heritage and GQ in this regard: a brick containing 30-something cards wrapped in cellophane and packaged within an oversized cardboard container.  Then again, I don't think Opening Day has gotten the hanger box treatment, have they?  Though, Opening Day is a brand apart in many ways. 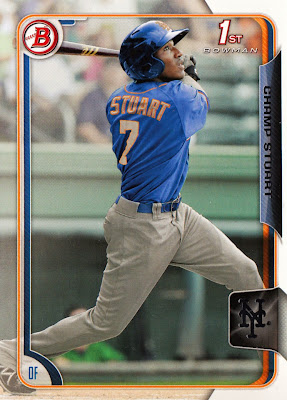 Anyhow, the box I snagged had the usual assortment of stuff you've come to expect from Bowman: base cards, prospects, chrome prospects, a few inserts and so on. 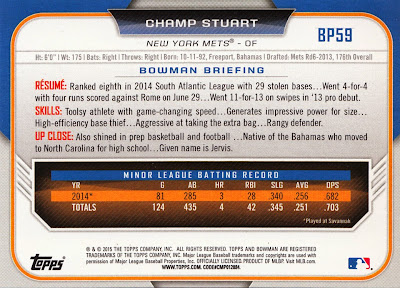 As usual, Bowman does its best to confound the layman collector with a slightly altered look to the front and back of the prospects cards versus the regular base.  Traditions die hard, I suppose.

Anyhow, my hanger box netted me three new Mets cards, which is never a bad thing! 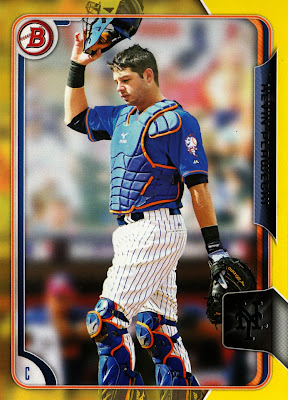 One of those Mets cards is a snazzy yellow-bordered parallel, which are special to the hangers and come five to a box.  It was pretty cool to snag a copy of Kevin Plawecki's yellow parallel.  It's the first non-Heritage Minors card I own of the young backstop who has taken over the club's primary catching duties in the wake of Travis d'Arnaud's injury.

So that's that.  Just a word of assurance to those of you who, like me, had become weary of Bowman's lame efforts of late.  I think this one will pleasantly surprise a lot of folks.