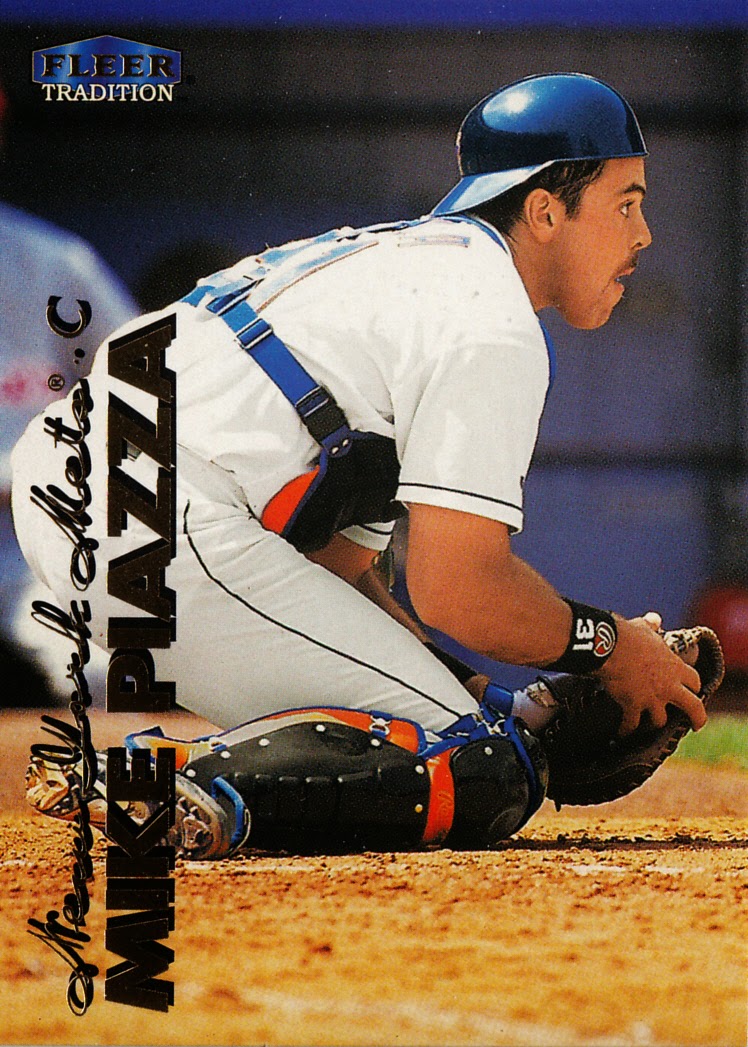 A week or so ago, I posted a Dwight Gooden 'card' that absolutely had me flummoxed.  It was obviously a cut-out from a magazine insert, but I Googled in vain for quite some time and came up empty.  Well, thanks to the awesome people who read my blog, the code was cracked.  And rather quickly, I might add.

One of the people leading the cavalry was Tony of Off Hiatus Baseball Cards.  Not only did he identify the set, but he also emailed me a checklist from the Standard Catalog which further verified the information.

Since he seemed up to a difficult task, I gave Tony another doozy that had me perplexed for as long--if not longer--than the Gooden.  The card you see pictured above seems harmless enough.  In fact, the front of this card is exactly the same at the '99 Fleer Traditon base card of Piazza.  Identical, actually.

But, the mystery begins when you flip the card over and observe the numbering in the top left corner: 4 of 6. 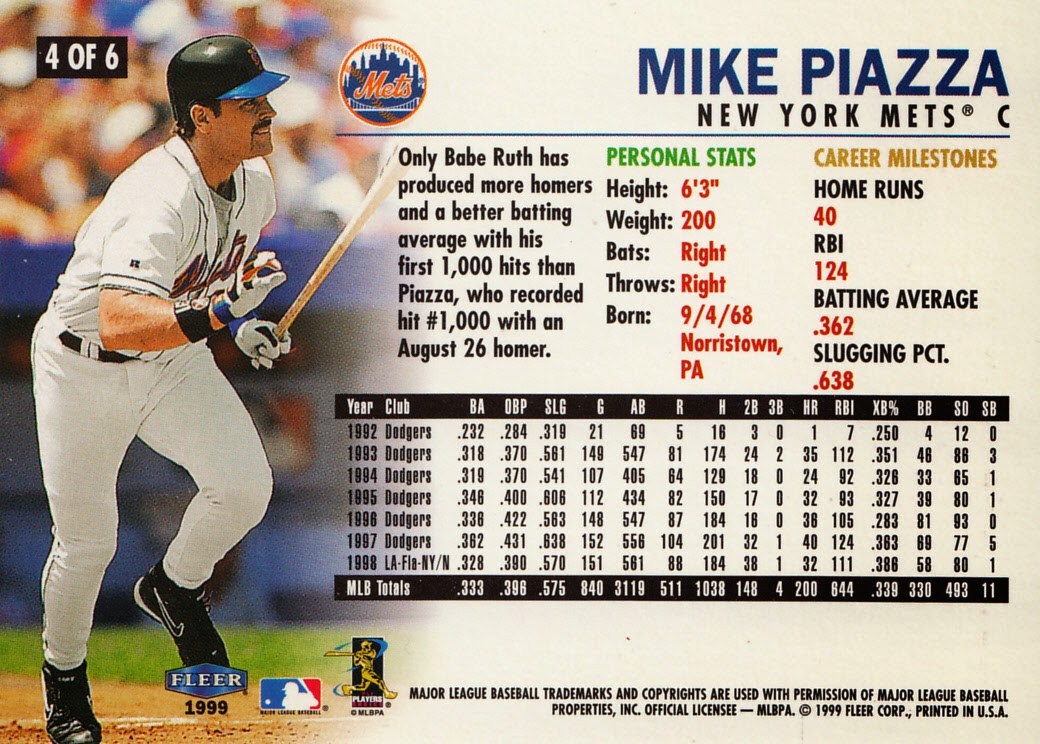 Now, I don't know about you, but that reads more like a telltale sign of an insert or an oddball than anything else. But, from what or where?  Nowhere on the card's front or back is any clue or indication given about where this is from.  Is it from a box of Crispix?  A bag of Twizzlers?  Perhaps it's part of a six-card promotional pack that was only available at hobby shops?  Your guess would have been as good as mine.  And my guesses were plenty. Unfortunately none of them were remotely correct, as each surmise led me to a dead end.

And that's where Tony comes in.  A week or so after I email him scans of the card, he responded with some remarkably good news.

Like me, Tony ran into a wall when researching this thing.  Unlike me, he kept at it and didn't just chuck the whole ordeal aside for something else.  His perseverance was rewarded when he stumbled upon this listing on COMC... 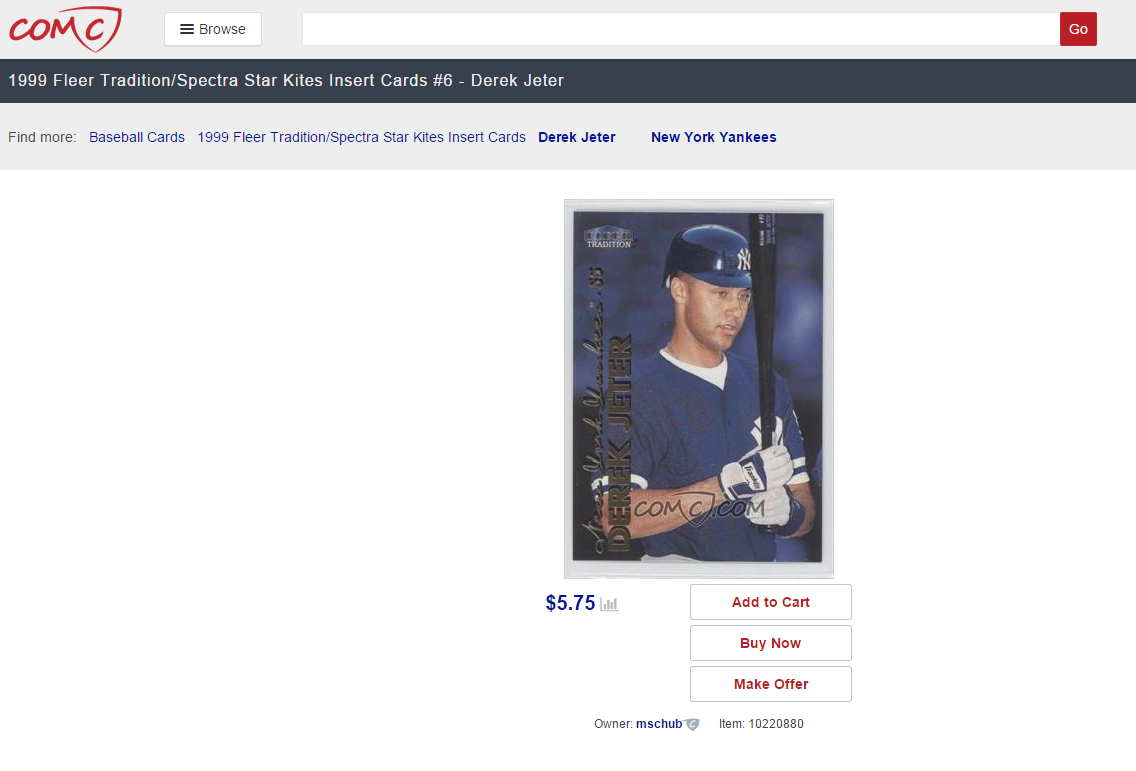 Looks just like a regular '99 Fleer Tradition base card, but this Derek Jeter card is listed by COMC as a Spectra Star Kites Insert.  And it's numbered "6 of 6" which is consistent with the numbering on the Piazza. 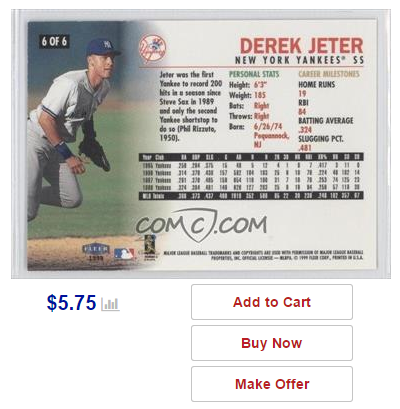 That, my friends, is what you call a big breakthrough!

[Ed. Note: By the way, if you're a Jeter completist, this would be a whopper of a card to add to your collection!]

But, back to the lecture at hand.  The discovery of this Jeter and the whole business about kites led Tony to the ultimate discovery, the solution to this enigma.  The Piazza and the Jeter were both bonus tchotchkes that accompanied the main course: yes, indeed, a kite!

Don't believe it?  Check it out for yourself: Spectra Star All-Star Baseball Kites. 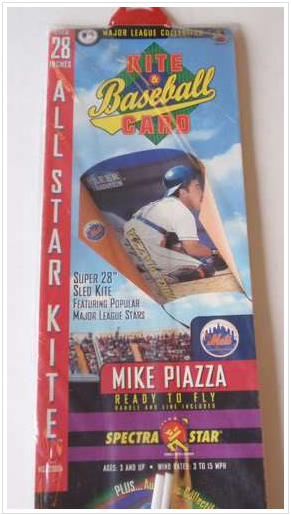 Remarkable!  I've never heard of nor seen such a thing in my life.  The fact that a toy company decided to merge a pair of traditional children's hobbies--baseball cards and kites--into one hybrid day-at-the-park amusement is astounding in both its oddity and simplicity!  Yet, here it is!

And, even further proof of the card's genesis for your doubting Thomases out there... 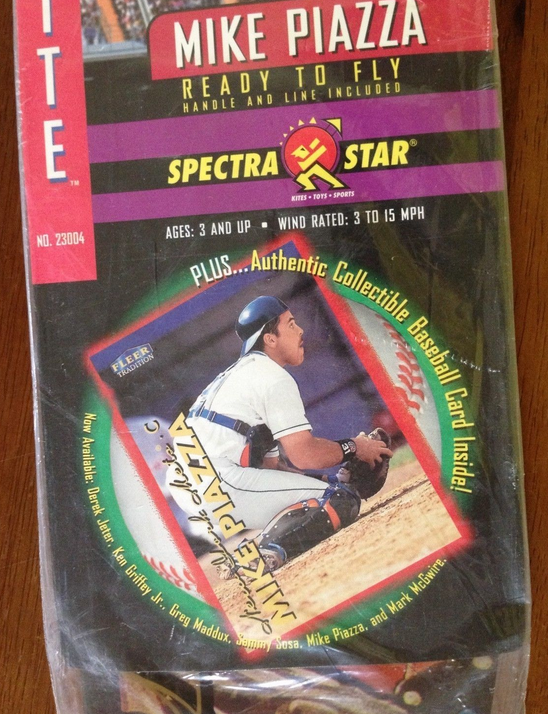 As they say in France, ladies and gentlemen:  Case closed!

What's even better, you can find these things on eBay, too!  They even have Piazza.  Or, should I say, they had Piazza.  Another hat tip to Tony for alerting me to the auction listing, as I put in a bid and won the sucker for a shade under eight bucks shipped.  It'll be something fun for Gabriel me to do on a nice breezy spring or summer down the road when he's a little bit older.

Thanks for pursuing this case and ultimately putting it to sleep, Tony!  It's the most impressive bit of detective work I've experienced this side of a Nero Wolfe mystery.

Oh, and I'll let ya know when my kite arrives!