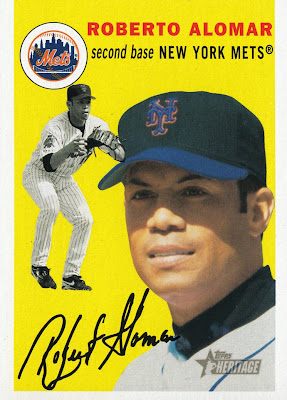 At last month's monthly card show, I came across a vendor who had six monster boxes of nothing but dime-priced cards from the early to mid-00's.  I could have easily spent my entire show's monetary allotment at that one table, but unfortunately I had already made a few stops before stumbling upon him.  Still, I did quite a bit of damage!

All of the non "stars" had been weeded out by the seller, so it was nothing but all-stars and HOFers.  A little disappointing for a team collector, but if you were strictly a player collector of someone like Bonds, Randy Johnson or Vlad, you were in a good place.  Even so, I still got my Mets fix big-time.

Lordy, I know that the late '90s and early '00's were a time of brand abundance, but it really came to life when going through these boxes and plucking out just the Mets.  Some brands familiar, some stranger.

The three Mets who popped up the most through my search of the massive boxes were Roberto Alomar, Tom Glavine and Mike Piazza.  I'll focus on Robbie during this post.  Not one of my favorite Mets ever, but a Met nonetheless.

Here's a portion of the nearly 30 cards of the Hall of Fame second baseman that I unearthed...


Man, this was a pretty terrible year of Flair!  Yuck-ola.  Not sure what they were going for here.

I love '03 Studio!  The exterior of ol' Shea Stadium as the backdrop doubled with the 'bat over the shoulders' pose makes this a kick-ass card.

A pretty classy and attractive base design for Patch Collection in '03.  One of my favorite new Alomar cards for sure.


Keep in mind, Roberto Alomar played a year and a half for the Mets and, with this recent batch included, I now have 48 unique cards of his in my Mets collection.  That's pretty frickin' wild!

Yeah, there were lots of half-assed, mailed-in and senseless efforts from this era of collecting, but the sheer variety of products is doggone impressive.  Part of me wishes that I was actively collecting cards during this period, but the sane side of me is glad I was on hiatus for fear of going batty.  Regardless, I harbor no shame in trying to track down as many Mets as possible from these years!

If I don't flake out or forget, at some point in the near future I'll show ya some of the Piazzas and Glavines I snagged from the same vendor.