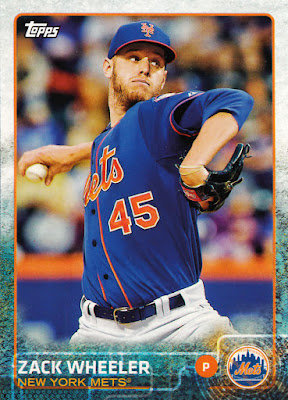 The Kaz family unit had occasion to be in Central NJ on Saturday afternoon, affording me an opportunity to swing by the Modell's Sporting Goods store that I annually stop at for the express purpose of grabbing the Topps Team Set of the Mets.

You know the deal: Each year Topps produces a 17-card set for each team, issued in individual blister packaging.  For the most part, the cards in these sets are nearly identical to those you'll find in the flagship product.  The one main difference is the numbering on the card backs.  And, occasionally, one or two of the cards will feature an alternate photo choice.  Or maybe the cropping will be different. 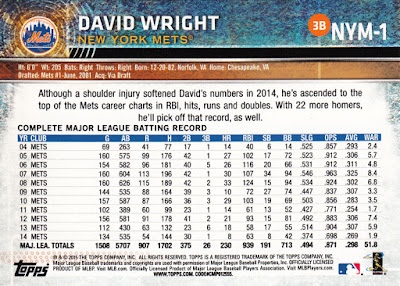 Anyhow, these things are really just for completists or team collectors stricken with advanced OCD.

One main difference I noticed right off the bat for this year is the lack of a stadium card.  Over the past few years, card No. 17 (aka the final card of the set) would be an overhead or panoramic shot of the team's home park. That has been omitted this year in favor of an extra player card.

The obvious reaction here is as follows: You cheap bastards, why not give us an extra player AND keep the stadium card?!?  I mean, who the hell decides on an arbitrary-ass number like 17 for the number of cards in a set anyway?  Is Topps really that dumb that they don't know how many pockets there are in a binder page?

Moving on, another difference is that the Topps logo on the card front is white as opposed to being foil stamped as it is in the flagship set.  Also, on some of the cards, the logo is in the opposite corner of where it is on the regular card. 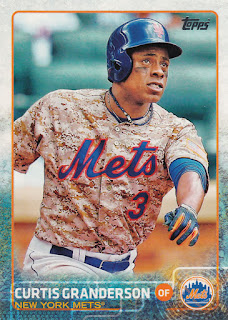 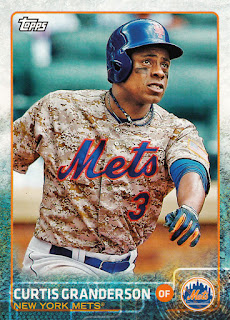 Regular flagship Topps Grandy on the left (notice the foil Topps logo in the top right corner) and on the right is Topps Team Set Grandy (white logo, left corner).

One final difference of note is the omission of the "Future Stars" label that certain cards feature on their flagship versions. 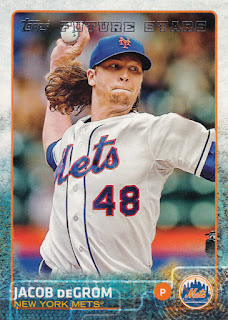 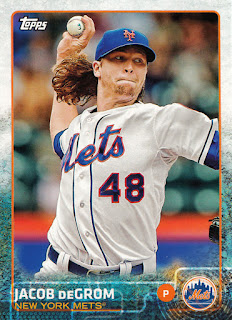 Maybe you care about such things.  Or maybe you don't.  But, there you go.

Okay, here's the checklist for this year's Mets team set:

No surprises nor any glaring omissions.  Eleven of the 17 players in the checklist were already featured in Series 1, and each of the cards has an identical photo (cropping and all) to the flagship card.  So, I'll spare you the scans of those.

But, here's a look at the six players who were not in Series 1.  Maybe their Series 2 cards'll have the same photos as the ones pictured here, maybe they won't.  Only time will tell... 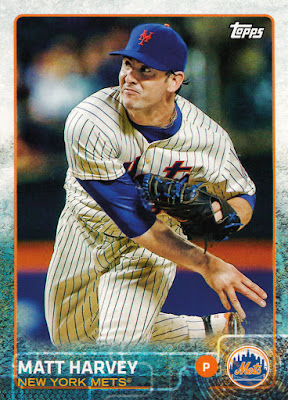 If this is the photo Topps goes with on Havery's Series 2 card, I'll be extremely satisfied. 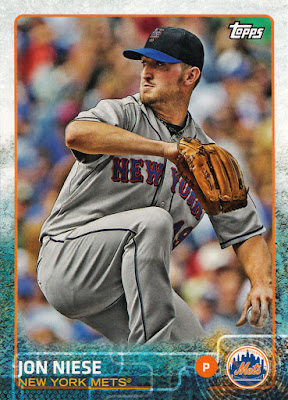 Now, this one has me completely dumbfounded.  The Mets haven't worn black caps or featured a jersey font with drop shadows since the 2011 season.  It's 2015, and last season was 2014.  Where the hell did they pluck this photo from?!  Very odd.  I will be completely shocked if this is what Niese's card looks like in Series 2.  (And, I hope it is different because that would make this one a pretty neat lil' oddity. If it's the same, it'll be just another teeth-grinding screw-up built upon laziness by Topps.) 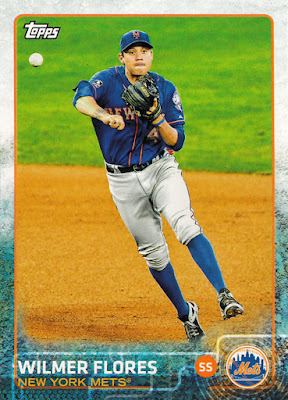 We already got a look at this photo of Wilmer in the Opening Day set. 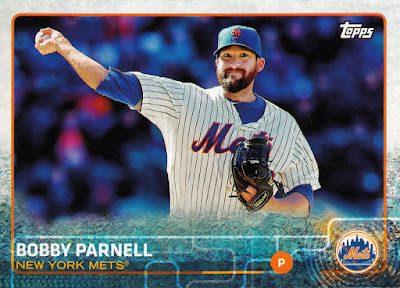 Cool horizontal shot of former closer Bobby Parnell, who pitched in exactly one game last year -- and it was the first game of the season.  He had Tommy John surgery soon thereafter and, coincidentally, returned to action for the first time in yesterday's loss to Atlanta. 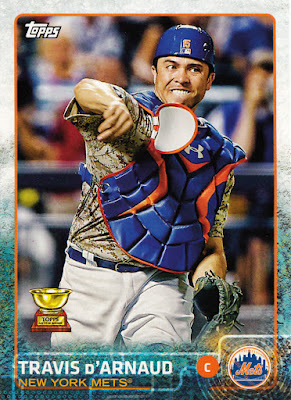 Just like Wilmer, we got a preview of this card in Opening Day.  By the way, it's interesting that the Rookie Cup doesn't get deleted but the "Future Stars" tag does.  Not complaining, just sayin'. 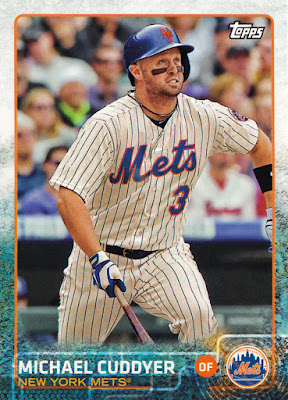 And, what would one of these sets be without some bad photoshopping?  Along with Niese's card, this one has the best chance to be different when Series 2 is unveiled.

Like I stated earlier, if you're a casual collector you can probably save yourselves five or six bucks by leaving this set on the shelf.  There isn't enough that's new to make this abbreviated offering worthwhile.

On the other hand, if you're a maniac like me, you'll need to have these cards in your collection.