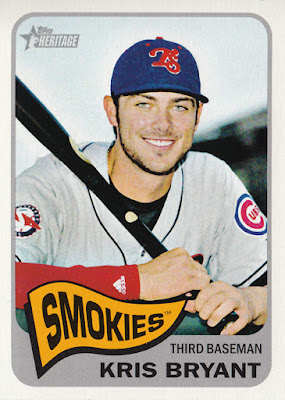 First, let's get the formalities out of the way: Happy Father's Day to all who are proud poppas!

Okay, onto the order of the day, which is a complete base set of 2014 Topps Heritage Minors.  That's 200 base cards minus the 25 short prints.  I recently obtained the set off eBay for $19.99 plus a few bucks for shipping. Not a bad ransome for a complete base set loaded with some of the game's up-and-coming superstars.  And it's on one of the best vintage Topps designs ever!

I was surprised and overjoyed to discover that Kris Bryant was not among the short print list.  Thus, I can finally say I own my first card of the most in-demand young ballplayer on the planet.

Some of the other players in the checklist: 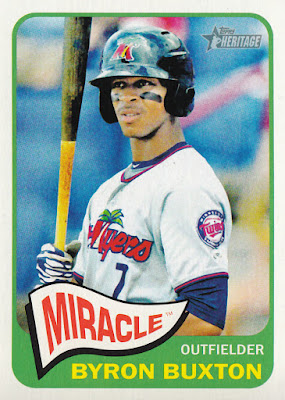 This guy was second behind Bryant on Baseball America's Top-100 prospect list prior to the season.  He put up some insane numbers at Double-A Chattanooga earlier this year, prompting his quick ascension to the big leagues.  Buxton is off to a slow start with the Twins, batting just .091 (2-for-22) with eight strikeouts through his first seven games.  But, I think he's gonna be alright. 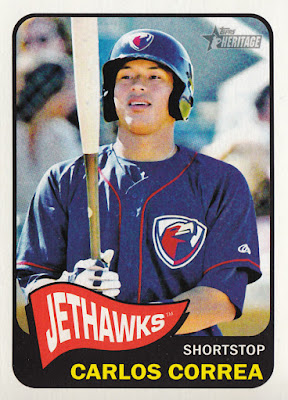 Correa has made a quick adjustment to major league pitching, swatting .314 with three homers and seven ribbies through a dozen games for Houston since his call-up from Triple-A.  He was ranked by Baseball America as the No. 4 prospect heading into the 2015 season. 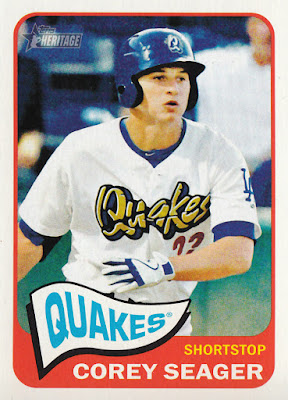 The game's fifth-ranked prospect is still on the farm, but he's blazing a fast track to the majors.  The Dodgers' shortstop of the future batted .375 in 20 games at Double-A before joining Triple-A Oklahoma City where he's put up a .293 mark through 43 games with four homers and 21 RBIs. 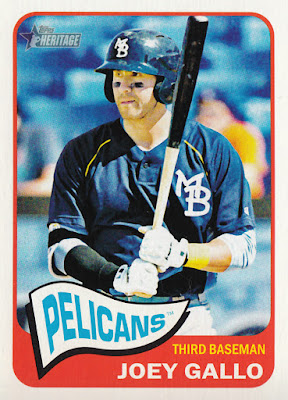 Gallo made his well-publicized debut for the Rangers earlier this month and has cooled off a bit since a blistering start.  Still, the Nevada native has five homers and 10 ribs over 17 games as an everyday player for Texas. 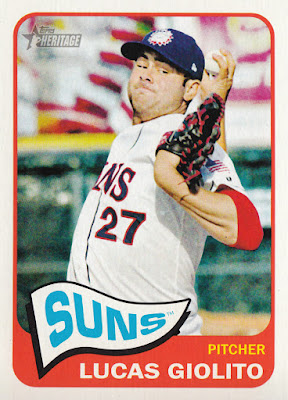 This young right-hander is a strikeout expert.  Giolito fanned 110 over 98 innings at Low-A Hagerstown last year and has carried over that proficiency to Advanced-A Potomac in 2015 (11.7 K/9).  He was the highest rated pitcher on the Baseball America list at the start of the year (7th).  In other words: Oh great, another front-line starter for the Nationals.  Well, at least he's still a couple seasons away from D.C. 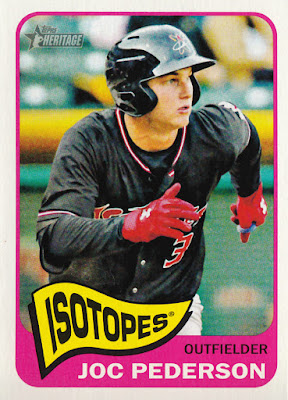 I don't really need to tell you a whole lot about Pederson, do I?  Great team name and a cool logo for L.A.'s Triple-A squad, eh? 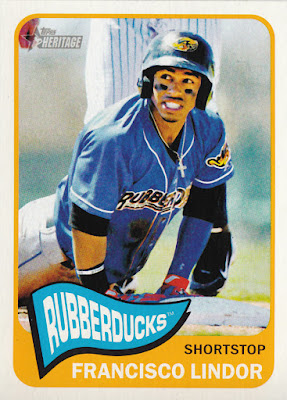 Nothing beats the Akron Rubberducks in terms of nicknames, though.  Lindor got the 'call to the show' back on June 14 and has been installed at shortstop for Cleveland on a regular basis ever since.  He was batting .281 for Triple-A Columbus at the time of his promotion. 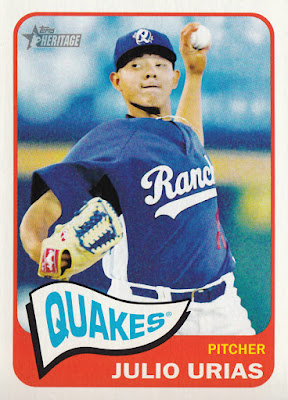 "That's how God works. He gave me a bad left eye but a good left arm."  That, according to his Wikipedia page, is how Julio Urias sums up his situation in life and baseball.  His left eye is nearly closed shut due to a childhood surgical procedure, but the southpaw's ceiling is unlimited.  In A-ball last season, Urias fanned 109 batters in just 87 2/3 innings to the tune of a 2.35 ERA.  He was recently shut down to have another surgical procedure on the left eye which should correct it fully. 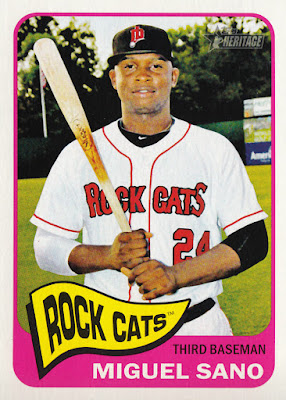 Another talented player coming through Minnesota's pipeline is Miguel Sano, who has so far clubbed a dozen homers through 60 games at Double-A Chattanooga.  Talk about a nice bounce-back after missing all of last season following Tommy John surgery.  Whispers are that he could make the jump to the majors sooner than later.  MLB.com has him ranked at the 10th overall prospect. 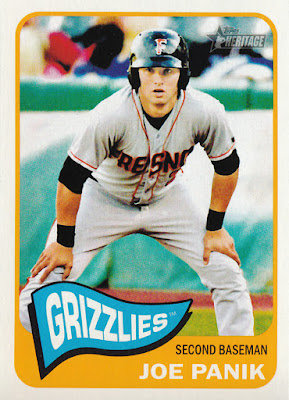 Panik actually had a card in 2014's Heritage High Numbers set, as well.  What a player this guy has been for San Fran.  He's presently batting .307 for the Giants and plays a good second base.  I'm a fan. 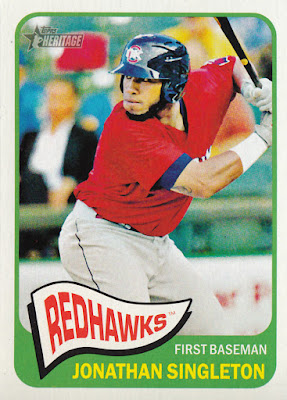 And, finally, I'll wrap up the highlights with another guy who was featured in the High Numbers set from a year ago.  Singleton, who had a taste of the majors last season, is still marooned in Triple-A this year.  He's amassed 33 extra-base hits (including 14 homers) with a .281 BA and a whopping 61 RBIs over 66 games at Fresno.  Not sure what else he has to do in order to get a plane ticket to Houston.  But, I guess the Astros are log-jammed right now at first base and DH with Chris Carter and Evan Gattis.

So that's just a sampling of the base set.  A few guys who are not pictured--because they are in the short-prints portion of the checklist--include personal favorite Noah Syndergaard along with familiar names like Addison Russell, Jorge Soler, Mookie Betts, and Maikel Franco.

No matter, the base set was well worth the expenditure.  Nice-looking design, big names and an overall fun collection of cards.