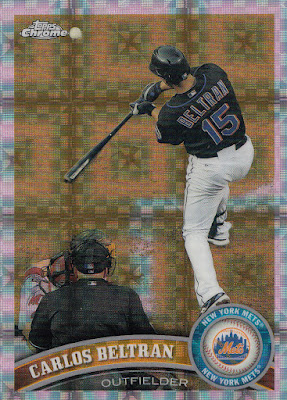 We're in the Christmas mood here at the Kaz House, so let's take a look at some cards that might look right at home on your Christmas tree!

These shiny, shimmery and golden cardboard samplings are courtesy of my pal Shane of Shoebox Legends. Intentionally or not, Shane's latest PWE had a Christmas ornament vibe going on!

In the lead-off spot, a bright 'n sparkly X-fractor from 2011 Topps Chrome.  At least I believe this is an X-fractor. Who the heck can keep up with all the different Chrome variations?  Colored refractors, X-fractors, super-fractors, super-duper-fractors.  Maybe someone can set me straight? 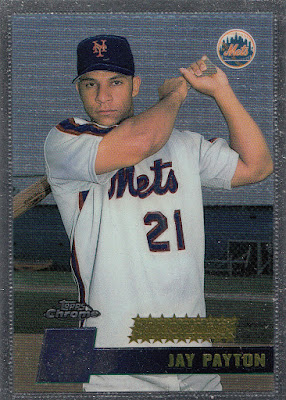 Topps Chrome from the mid-90s rocks!  This is from the 1996 set.  The golden, starry retangle above Payton's name says "Now Appearing."  Even in-hand, it's kinda hard to make out. 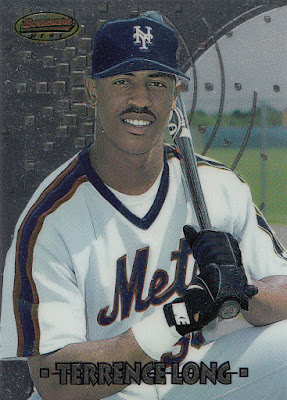 A frosty, chrome-y Bowman's Best card of former outfield prospect Terrence Long.  My ninth card of T-Long, who went on to have a few decent seasons in Oakland. 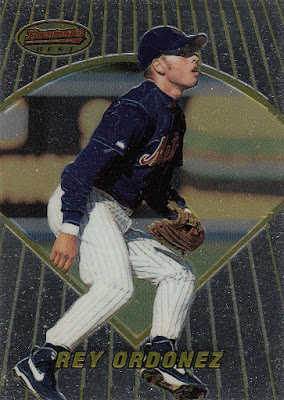 Sticking with Bowmans' Best, this one is actually a Bowman's Best "Preview."  I may be wrong, but I think these were available via the regular Bowman set that year (1996) as an insert.  I think.  Anyone? 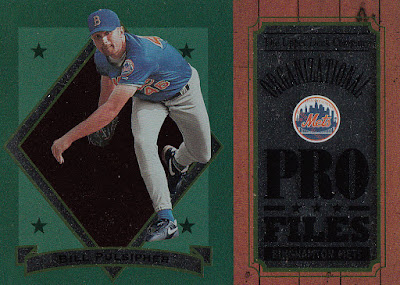 Another PWE, and another great mid-'90s insert of a former Generation K member.  This one's an "Organization Profiles" insert of Bill Pulsipher from the '95 Upper Deck minors release. 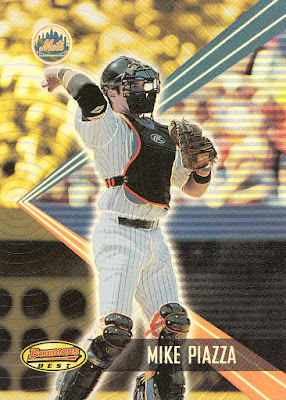 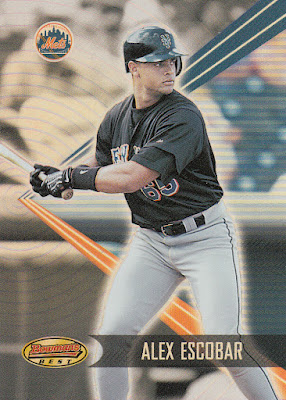 More Bowman's Best?  Why not!  I was always a fan of this product.  And, whether it was a perennial superstar like Mike Piazza or a not-ready-for-primetime prospect like Alex Escobar, the cards were always sharp! 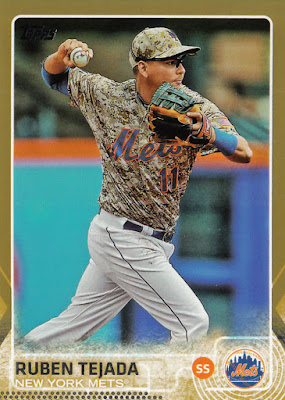 A nice gold parallel of Ruben Tejada's Topps card from this past year.  Not a huge fan of the camo jerseys, BUT I like how it looks on this card with the gold border.  Very nice! 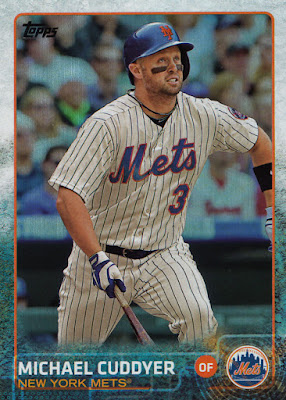 Tough to tell via scan, but this is a rainbow foil parallel.  Cuddyer, by the way, recently walked away from the final year of his two-year deal with the Mets and opted for retirement.  Smart move.  Good guy, nice career, but he was about done.  Injuries got the better of him all throughout 2015. 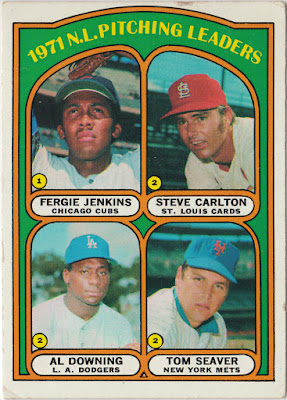 Wait a minute, what's this?  This isn't shiny! 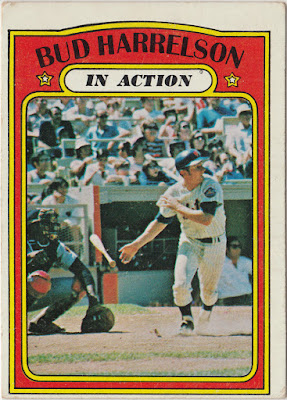 This one doesn't glow in the dark or have embedded crystals or anything like that.

Well, it just goes to show you that you can't go wrong with the old guard.  Just like a classic Bing Crosby Christmas song will always be better than N'Sync or George Michael's attempts at holiday standards, vintage cardboard will always win the day.

Another brilliant offering, Shane.  I'm thankful, as always.  Merry Christmas to you, my friend!  And may 2016 bring us a Sox/Mets World Series!