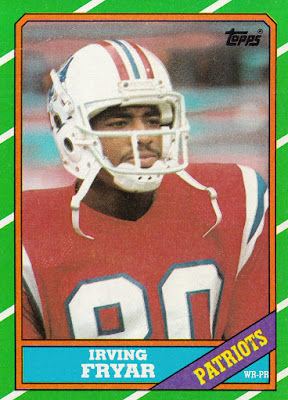 I don't do a whole lot of football on here, but I felt compelled to throw something NFL-related onto the blog today since it's Championship Sunday.  Four teams, two games....with a trip to Super Bowl 50 on the line!

I used to be all about football cards back in my teens.  But, I've never been able to recapture my passion for football cards the same way I did for their baseball counterparts.  Then again, after going through my football boxes looking for some cards to post, I now have the itch to buy one of those five-buck mystery boxes from my local card shop!

I've taken the liberty of choosing a representative card for each team.  The only criteria is that the card cannot depict an active player.  Also, it had to be a Topps product.

Let's begin with the AFC clubs...

For the East Champion Patriots, you can see Irving Fryar in the lead-off spot.  Fryar played nine years for the Pats and was a member of the 1985 AFC Champions team that met its demise in Super Bowl XX.  I also chose this card because '86 Topps happens to be one of the greatest sets of all-time, in any sport.  At least from the standpoint of design and look.  I love it! 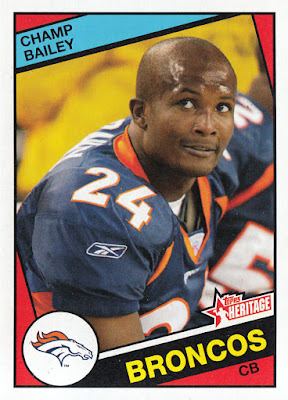 Champ Bailey gets the nod for the AFC West Champs and the No. 1 overall seed in the conference.  Mostly I selected Champ because he happens to be one of Mrs. K's favorite all-time players (dating back to his Redskins days).  But, he was no slouch, obviously.  Ten seasons in Denver and a boatload of Pro Bowl selections.  I think he may still have the record for most Pro Bowl selections among all defensive backs. 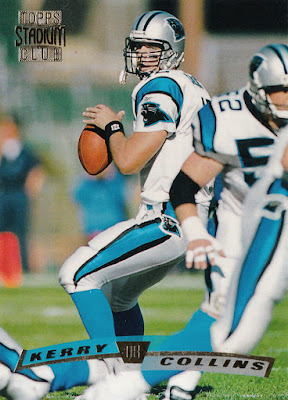 For the team that lost just once this season, the Carolina Panthers are represented by former Penn State Nittany Lion Kerry Collins.  Collins had the Panthers, in only their second year of existence, just one step from the Super Bowl.  Remarkable stuff!  However, Favre's Packers derailed Carolina's dreams at Lambeau Field in January of 1997. 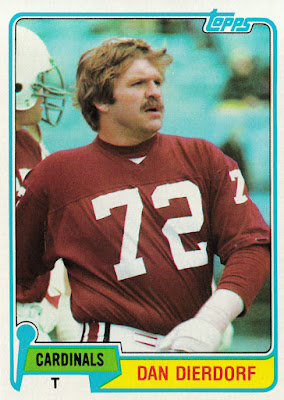 Lastly, the Arizona Cardinals have a Hall of Famer in their corner with all-time great offensive tackle Dan Dierdorf. Dan played his entire 13-year career for the Cardinals organization--back when they were the St. Louis Cardinals.  He also enjoyed a long broadcasting career at ABC and CBS after his playing days concluded.

Now, my picks for the day.  I know you've been waiting breathlessly...

Who I want to win:  Broncos and Cardinals.

Who I think will win:  Broncos and Panthers

I like the home field advantage for both teams, especially Denver.  Brady and the Pats don't have a great record at Mile High, and I think Denver's defense will make enough plays to give Peyton Manning one last stab at a second Super Bowl.  I'm a Peyton Manning guy, so I'll be rooting for him.

On the NFC side, I think this is essentially a coin-flip game.  Both of these teams are very complete on both sides of the ball.  Both have electric offensive players and shut-down D's.  But, Carolina has been on such a magic carpet ride this year, led by soon-to-be-MVP Cam Newton.  I can't see them tripping up--at home--with a Super Bowl berth so close.  I am a  long-time Larry Fitzgerald fan, so my loyalties lie with the Cards in this one.