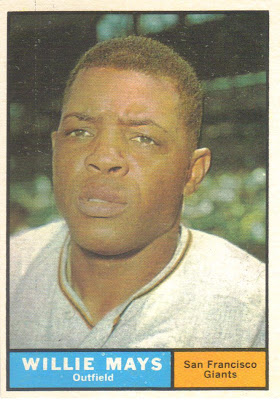 I was either seven or eight years old when I officially became the keeper of my dad's childhood baseball card collection.  Or at least what remained of it.  Years of flipping them (literally) or losing them in a game of marbles or putting them in bike spokes whittled down the volume of cards in his stockpile.  At least that's what he tells me.

And, naturally, Grandpa or Grammy K had something to do with the loss of cards, too.  Many were either given away or shown the garbage bin after my dad went to college.  The last discussion we had about the card collection, which was quite some time ago, Grandpa K absolutely refuted my father's claim that at least one shoe box of cards was gifted to a family friend.  Just for fun, maybe I'll stoke up the conversation at the next family function.  Hey, it's all love!

As for Willie Mays, he's a name -- along with Babe Ruth, Mickey Mantle and Hank Aaron -- that any boy who grows up loving baseball intuitively knows and understands.  At least in my life and upbringing, those guys are/were the Mt. Rushmore of baseball players.

So, to have a card of Willie Mays present in my dad's collection was akin to finding gold in your backyard.  And, to boot, it's in pretty fantastic condition...unlike some of the others he was able to retain.  (Remember those marbles games and flipping contests?  They take their toll, y'know!)

Thankfully, eight-year-old Me did a unbelievably solid job of keeping all dad's cards in the status quo condition.  I mean, I look back at my 1987 and '88 Topps cards and some of them look like they have been used to scrub the bathtub.  So, the fact that I didn't harm the vintage cards any worse is pretty impressive.

I always tell myself that if I ever submit a card to Beckett or PSA for grading, this is gonna be the one.  But, I can't see that happening any time soon.

What I've Learned from the Back of this Card:  Mays sacrificed nearly two seasons of his early major league career for his country.  He played just 34 games in 1952 and missed the entire '53 campaign due to military service during the Korean War.  He returned for the '54 season and produced a monster season, batting .345 with 41 homers and 110 RBIs.  He was named MVP of the National League and, yes, the Giants won the World Series.