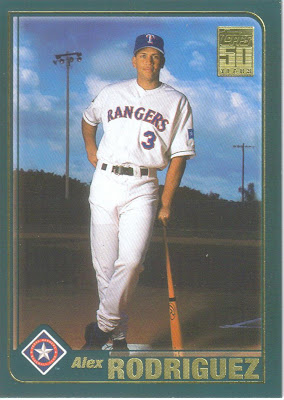 Photoshop should never, ever be used on baseball cards.

Nothing boils my blood more than a Topps card from the past decade that has been irrevocably mangled by Photoshop.  Granted, sometimes the nerds in the graphics department do a decent enough job.  So much so that you have to give it a second or third look.  But 99.9% of the time it's a terrible effort.

And what kind of drooling idiots does Topps take us for?  They take action photos from the previous season and Photoshop the new uniforms, helmets and caps onto these guys.  Like, do they think we're going to forget that Pujols was a Cardinal and Reyes was a Met in 2011?

Not so long ago I finished loading my 2001 Topps set into binder pages and gazed in wonderment at the beautiful photography that Series 2 featured.  It's loaded with big-name free agents posing in the threads of the their new clubs.

Photos taken during Spring Training.  In other words, no Photoshop.

And you know what?  These cards look great.

Alex Rodriguez isn't sliding into home or running the bases or striding into a fastball, but that doesn't mean the above card isn't a sharp number.  Nor does it lessen the impact of the card in this set.  If nothing else, the fact that this is a contrived pose draws attention to the fact that the player has switched teams.

To me, this is an iconic card.  A-Rod's first Topps card as a Texas Ranger.  Back when  he was must-see TV. The most potent offensive player in the sport by a long shot.  Back before he became something of a punchline. Fodder for Facebook memes and the back page of the NY Post.

It's not totally fair to say new technology has made Topps lazy.  After all, they were airbrushing caps and jerseys in the vintage era, also.  And doing a pretty choppy job of it, at that.

But, Topps has become lazy.  They have the resources to get photos taken during the spring, allowing them to get the major FA's into Series 2 wearing their new colors.  Instead, it's just easier to click the mouse a few times and *poof* Roy Halladay is a Phillie, not a Blue Jay.

Maybe they think we collectors will reject non-action photography on their cards.  I think that's nonsense.  I can't imagine there are that many folks out there who prefer cheesy Photoshop jobs over, say, a classy card like Alex Rodriguez, 2001 Topps.

What I Learned from the Back of this Card:  Alex wore number 3 early in his career in honor of Dale Murphy.  Growing up in Miami, A-Rod watched plenty of Atlanta Braves baseball on TBS and adopted Murphy as his boyhood idol.
Posted by Mark Kaz at 7:39 PM