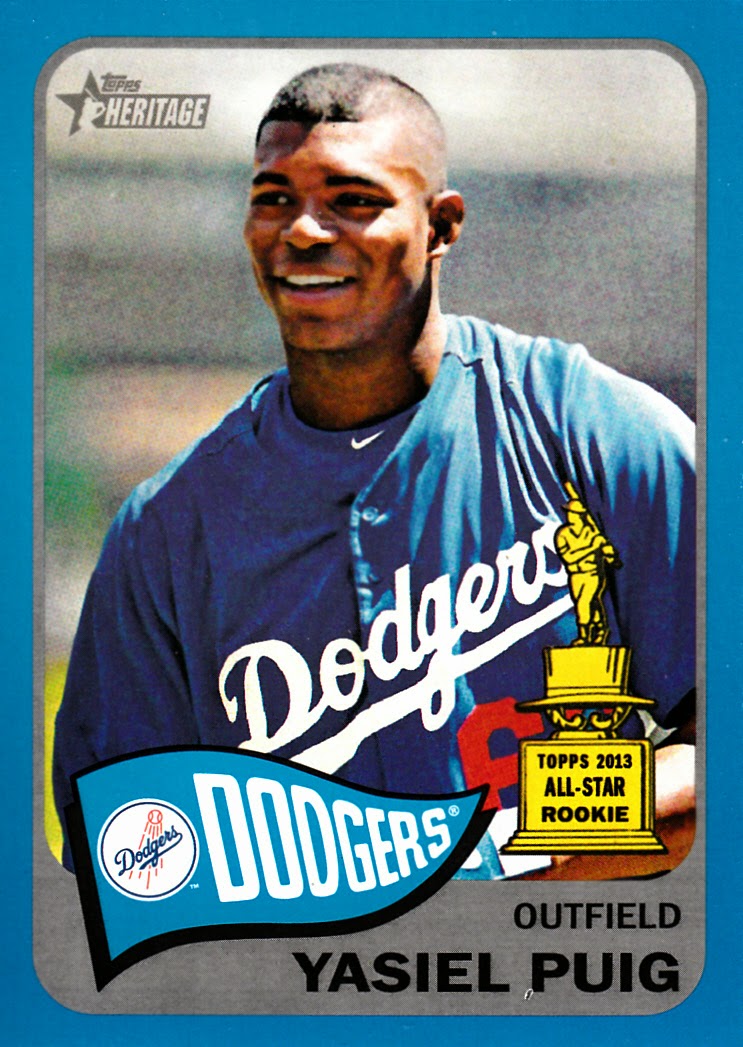 I'm always browsing eBay to find a deal or two that may have snuck through the crosshairs of other more serious auction hunters.  I mean, there are so many hours a day to hunt for baseball cards, right?

Well, you know how crazy I am for the color-bordered variations from Heritage.  So I'm always on the lookout for new additions to the respective red and blue collections.

My latest score was of the blue-bordered variety, and it was a doozy:  a six-pack of 2014 blues, including Yasiel Puig and Jose Fernandez. 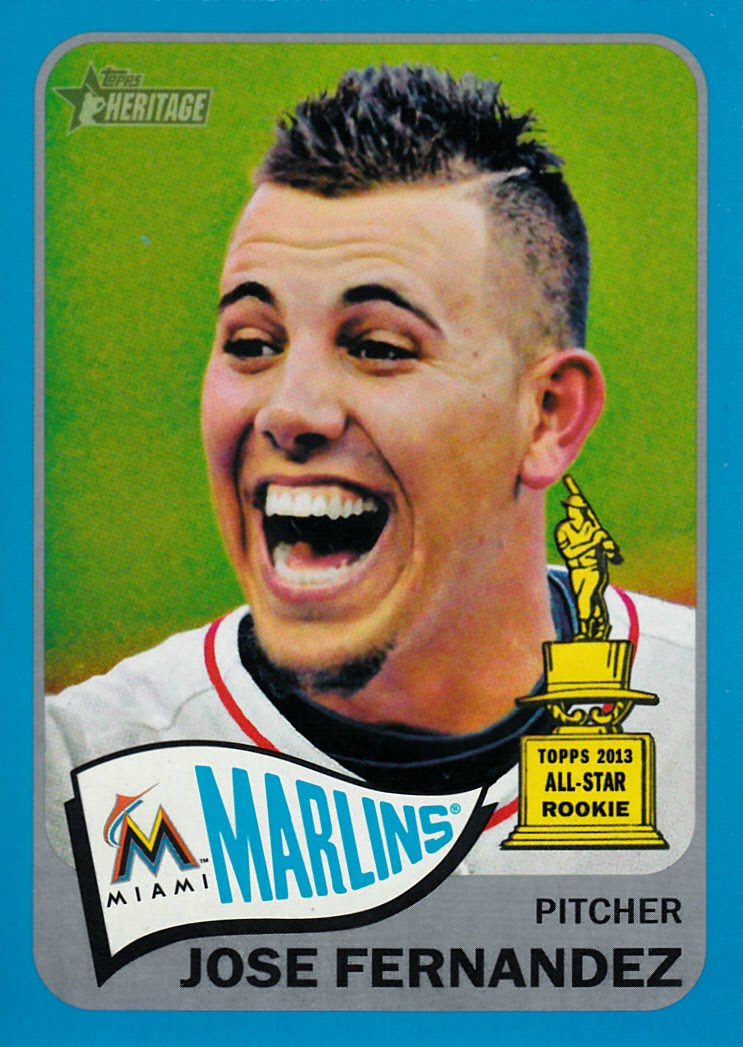 These were two of the Walmart variations that I wanted the most, so it was a great feeling to knock them both out in one fell swoop.  And, I didn't have to go crazy with  my wallet to make it happen.  In fact, this six-card Buy It Now was way cheaper than most of the single-card auctions for either the Puig or the Fernandez cards.

Also part of this sextet of cards are two of the best right-handed pitchers of this era... 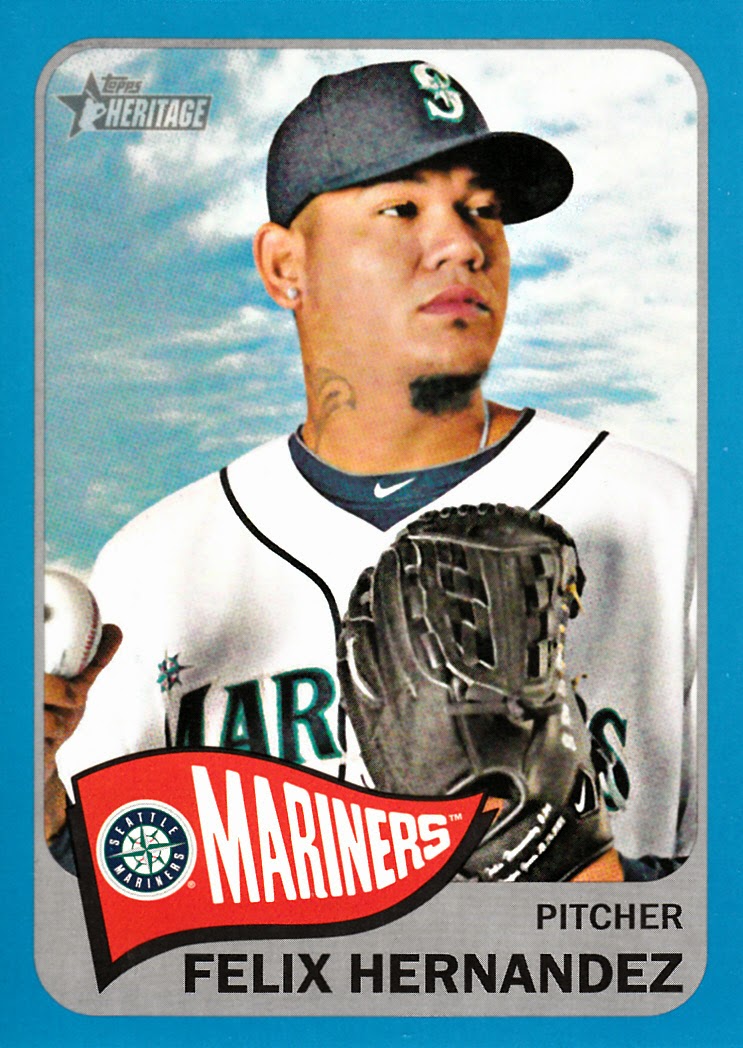 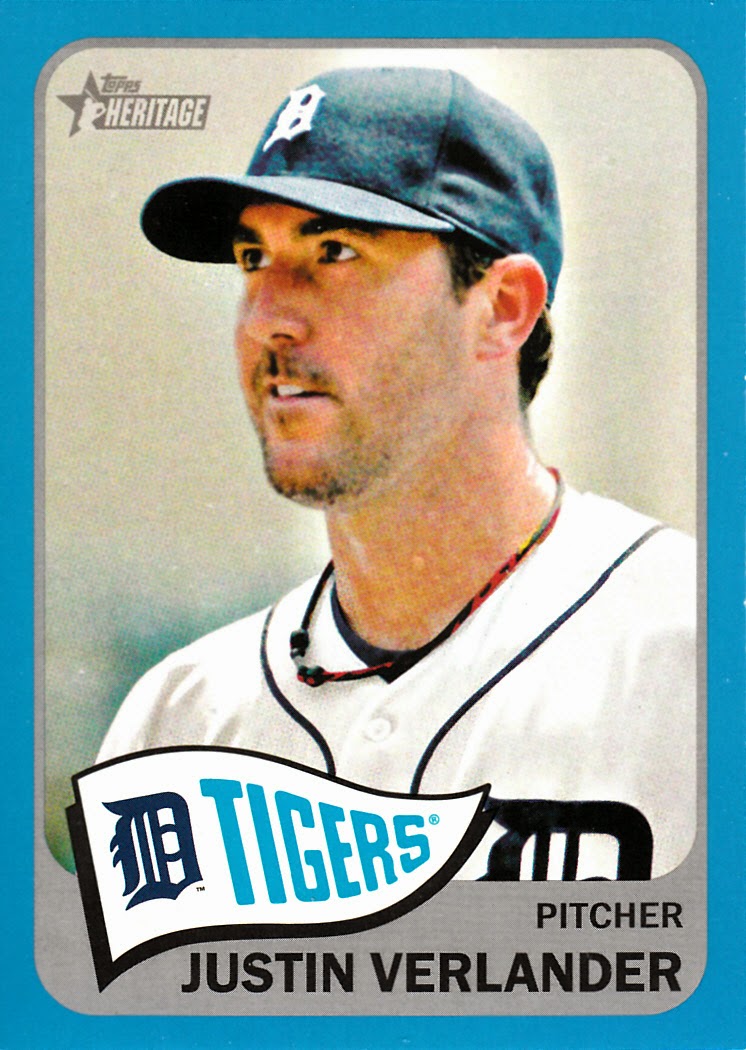 The zit-faced interns at Topps sure did get a kick out of using the "high blue sky with the whispy stratus clouds" backdrop, eh?  It kinda looks natural on King Felix's card, but it looks rather forced on a few of the others they tried.

Speaking of Hernandez, his newest teammate was included in this lot o' blue, as well... 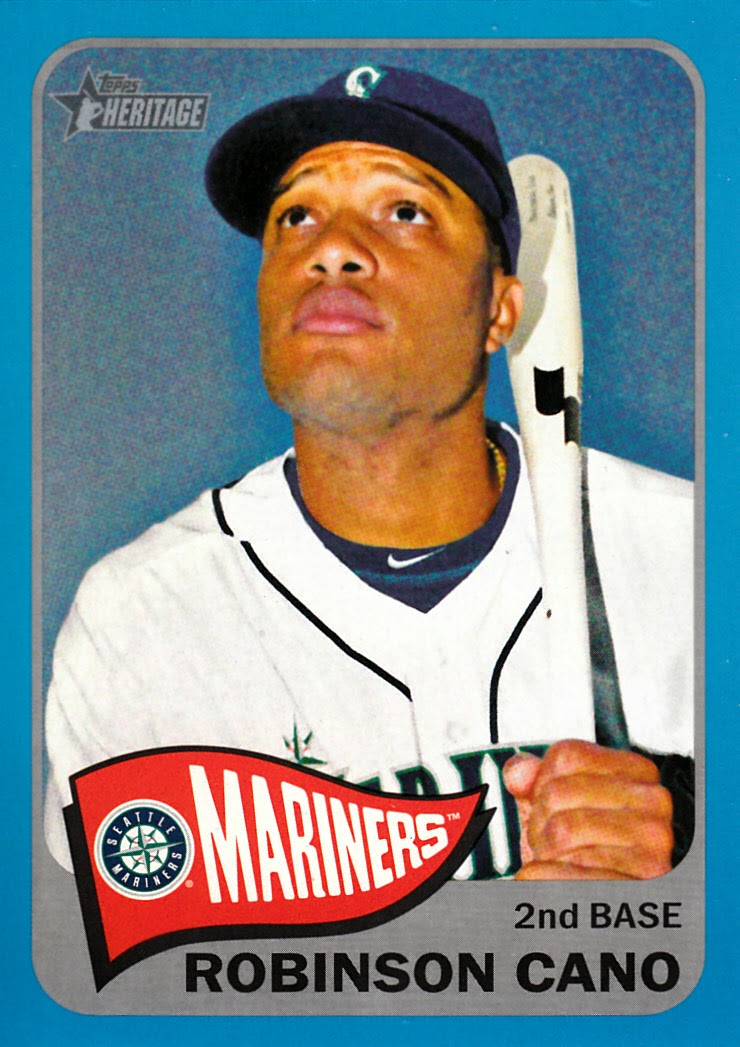 Cano's skyward glance coupled with some close-up cropping made this a pretty simple photoshop job.

And, finally, one of the most exciting young outfielders in all of baseball... 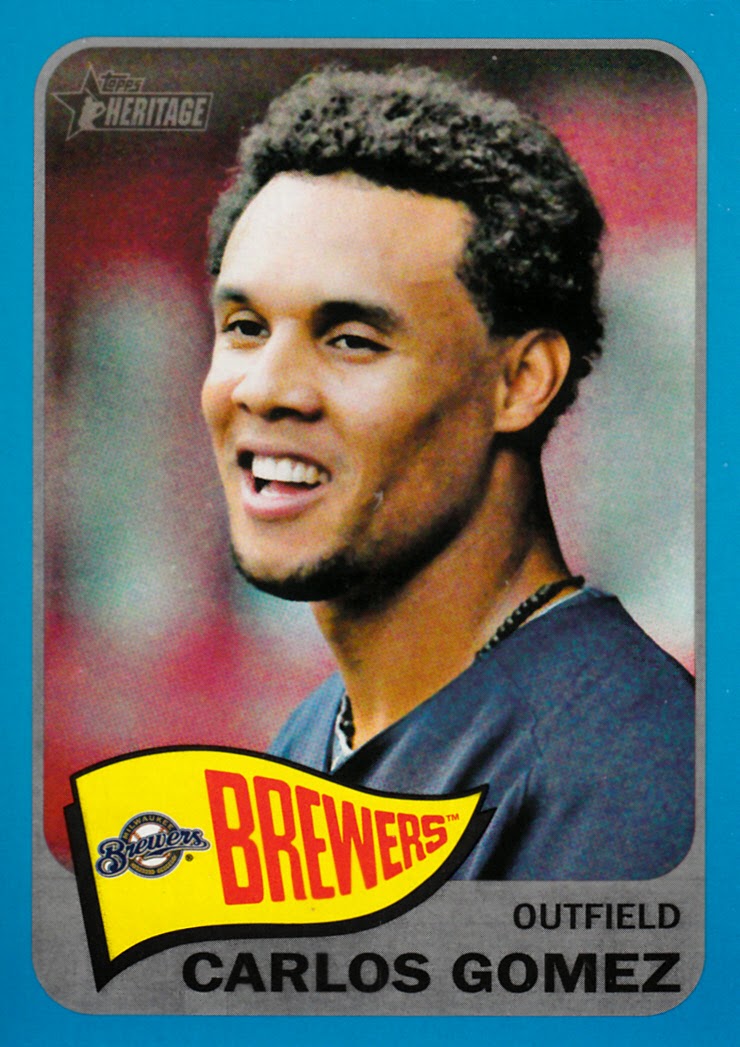 Gomez is a former Mets prospect who got dealt to Minnesota in the Johan Santana deal.  He's always been a great defender in center field, but he's really come into his own as an offensive threat since he's been in Milwaukee.

With this acquisition plus the two I already had, I now have 8 of the 25 Walmart parallels.  Here's a look at what I've accumulated thus far: 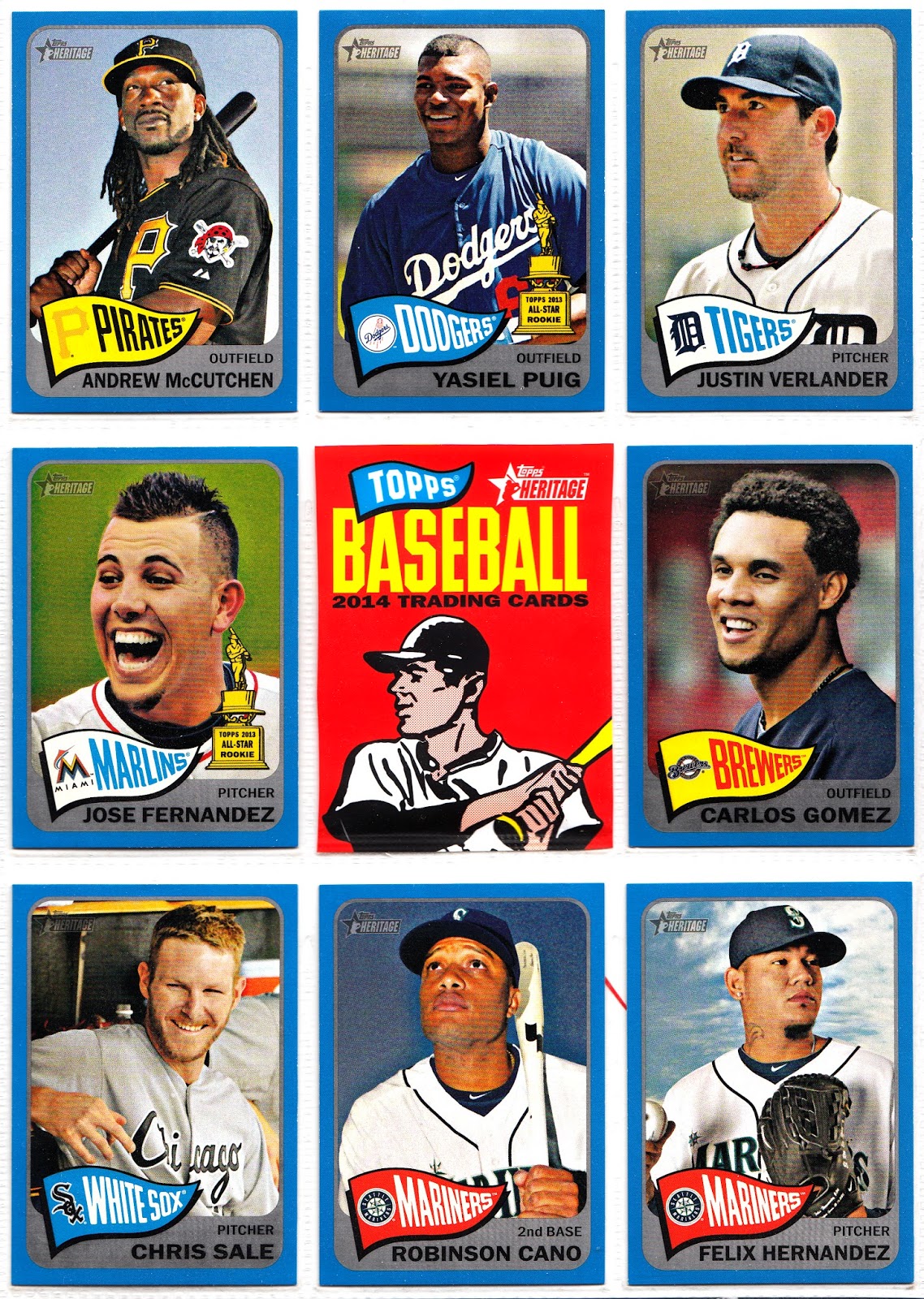 Doubtful that I'll be able to track them all down on the cheap, but I'll have a good time trying.  Heck, if I'm only able to snag the Wright and Wacha cards, I'll be a pretty happy camper!