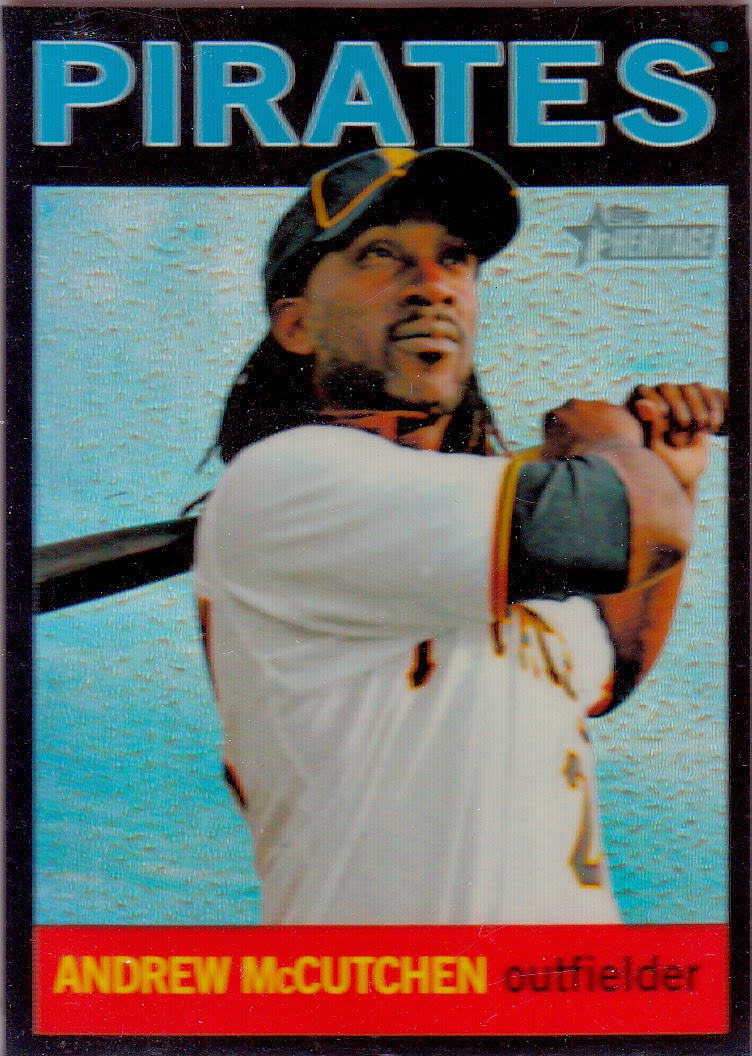 Friday brings along with it my favorite day of the baseball card calendar: the arrival of Topps Heritage!

It didn't used to be this way, as Heritage was a brand I mostly ignored except for those cards of my favorite players I would come across in dime boxes at hobby shows.

But, I became a full-blown Heritage convert with the 2012 edition and have been sweet on the stuff ever since.  I completed the 2012 set, including the short prints and the high numbers box set.  As far as the 2013 set is concerned, I still have my work cut out for me, largely on the SP front.  But, at least I have the high numbers set taken care of, I guess.

Now, because I haven't finished off the '13 set, I can't technically "take one last look" or anything along those lines.  Cos, y'know, the book isn't closed on it yet.

I can, however, share my 10 favorite cards -- including inserts -- from the majority portion of 2013 Heritage that I have acquired.

After all, I'm always looking for an excuse to flap my fingers about Heritage.

Not included in this list, but deserving of honorable mention, is the above Andrew McCutchen black refractor that I pulled out of a retail blaster last summer.  Numbered 43/64, it was by far my best pull from last year's product. Yet another reason why I'm probably going to pull the trigger on a hobby box this year.

Okay, now on with the formal "favorites" list, in no particular order... 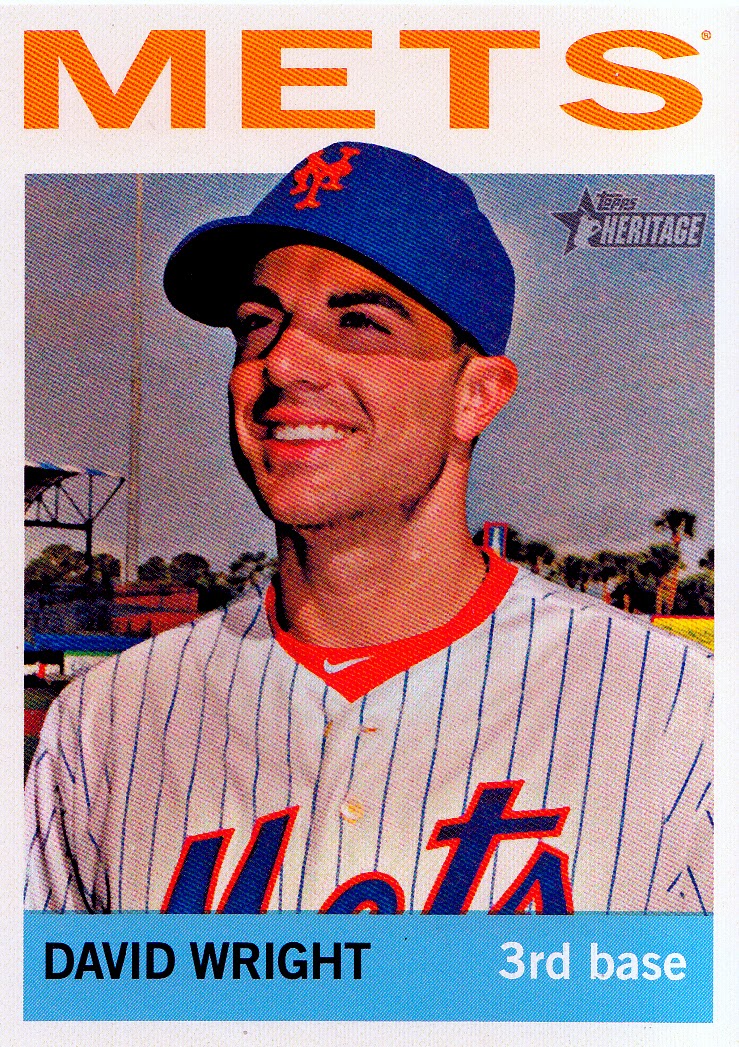 But, of course, you knew Captain America, David Wright, was going to be in this list somewhere, right?  David made the short print checklist for the third straight year in 2013.  He'll be among the plebes in the 425-card base list this year, which is fine by me! 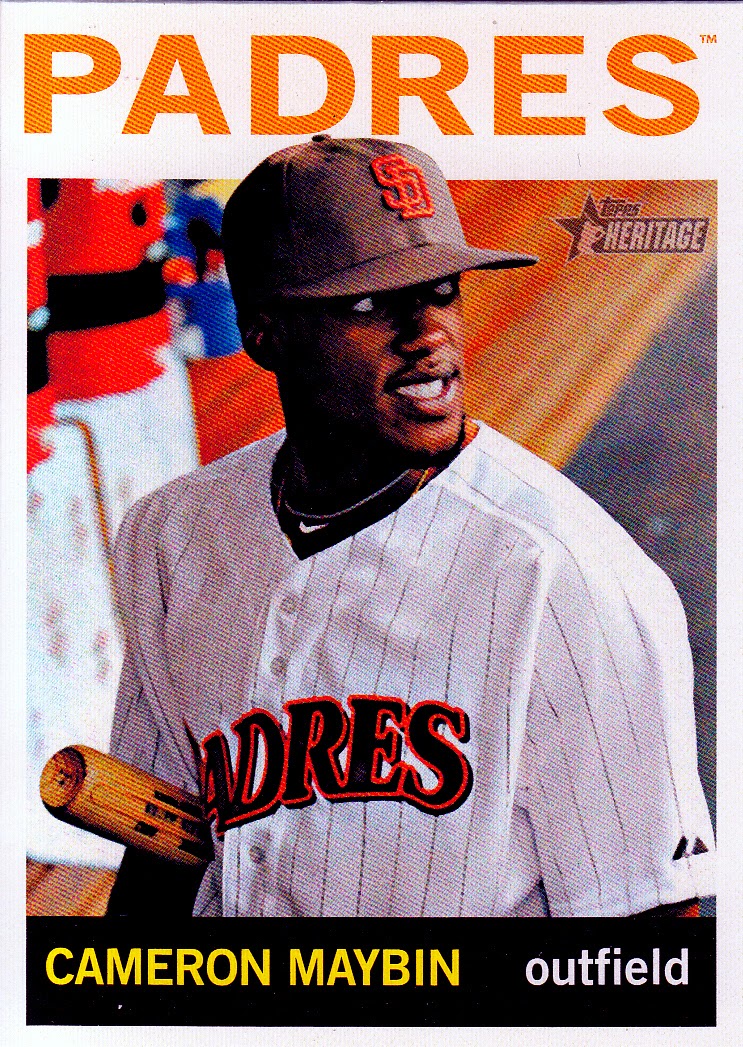 Everyone loves a throwback (you prefer retro?) uniform, especially when it's captured within the confines of a trading card.  I'm no different, and this is the best -- and only? -- throwback nod from 2013's set. 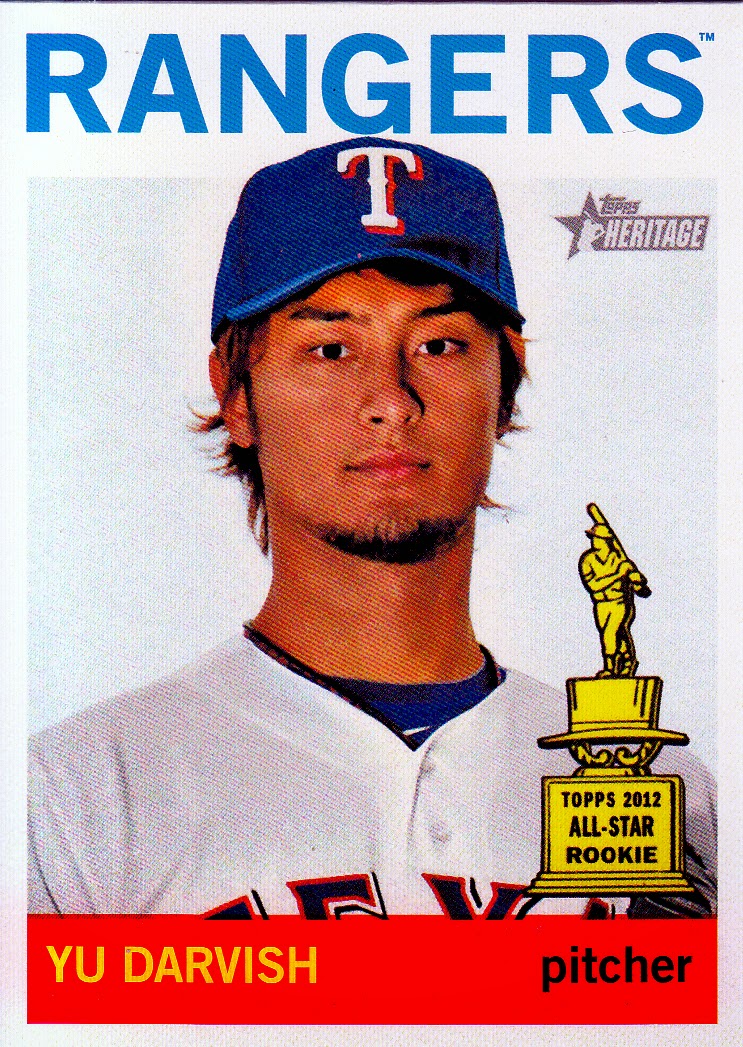 Because Topps put seemingly every other superstar and hot rookie in the short print list last year, I was shocked that Darvish was among the regular ol' base cards.  A pretty snazzy rookie cup on the card of a pretty important young pitcher. 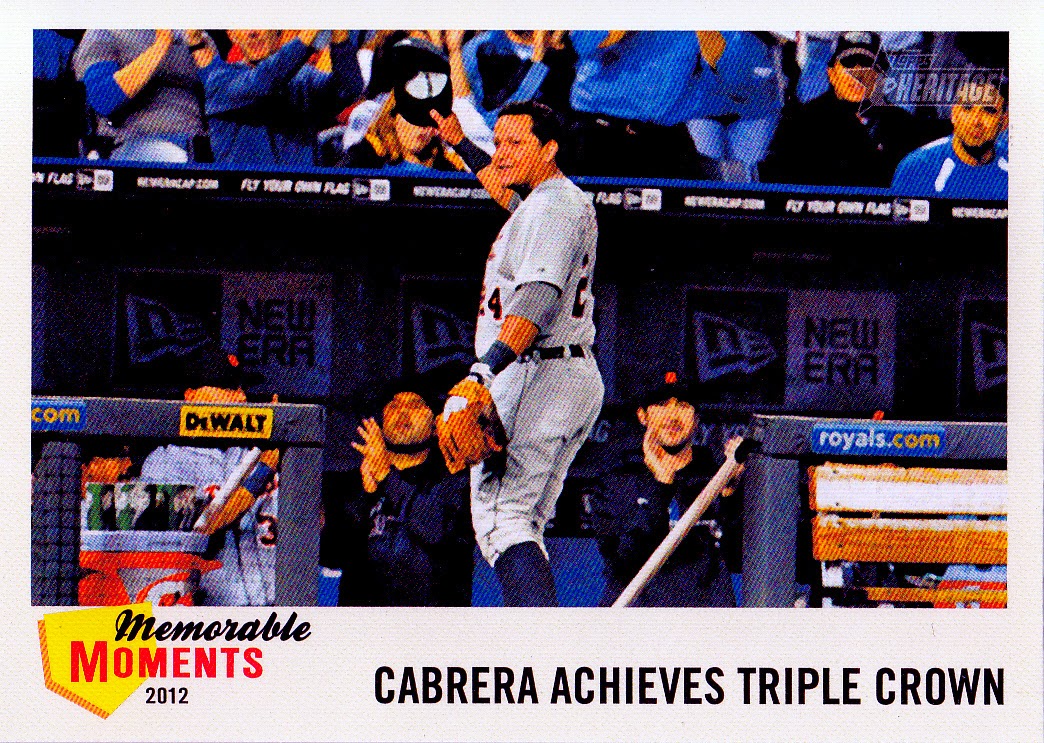 This is probably the best single insert card from 2013.  It's a great feat, a great player and a great choice of photograph.  Ya know, a triple crown! 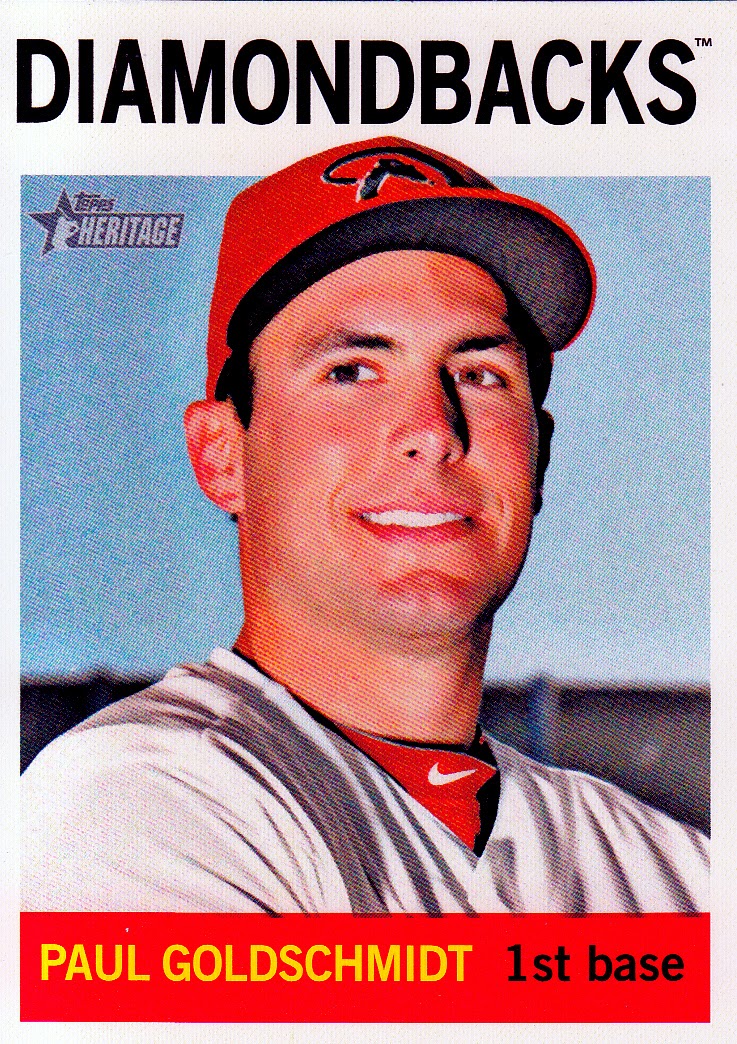 It's a simple card, yes, but there's something I like about Paul Goldschmidt's base card.  Maybe it's the allure of this guy's limitless upside.  A future league MVP, we can probably expect Arizona's first baseman to be among the short prints for more than a few years. 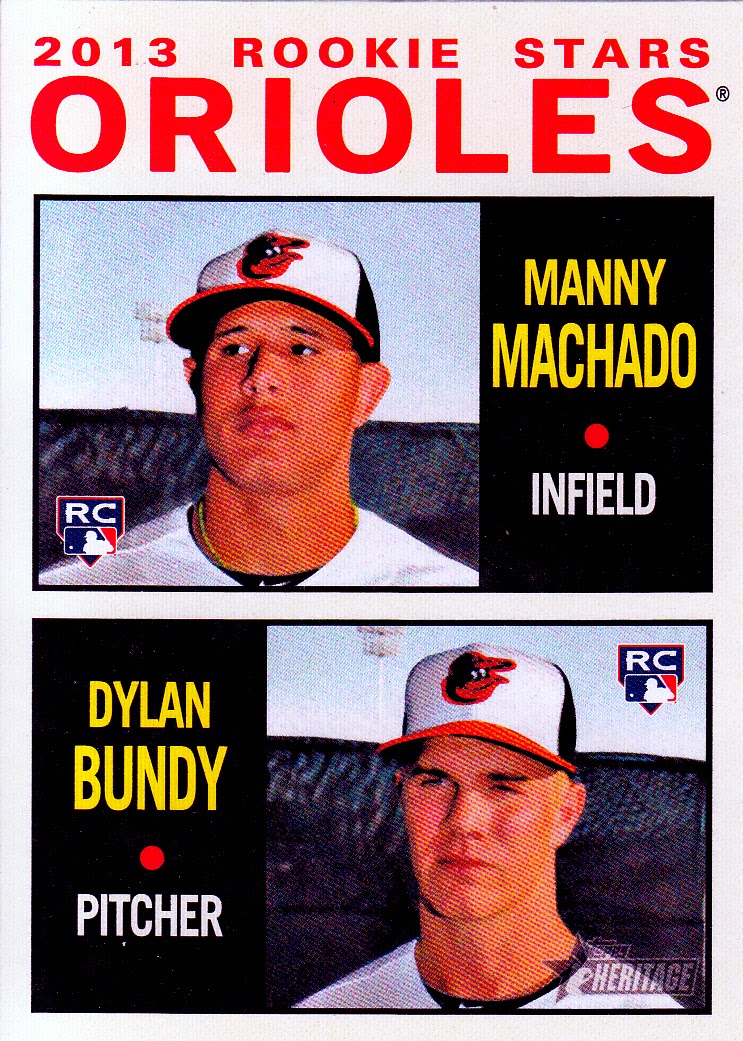 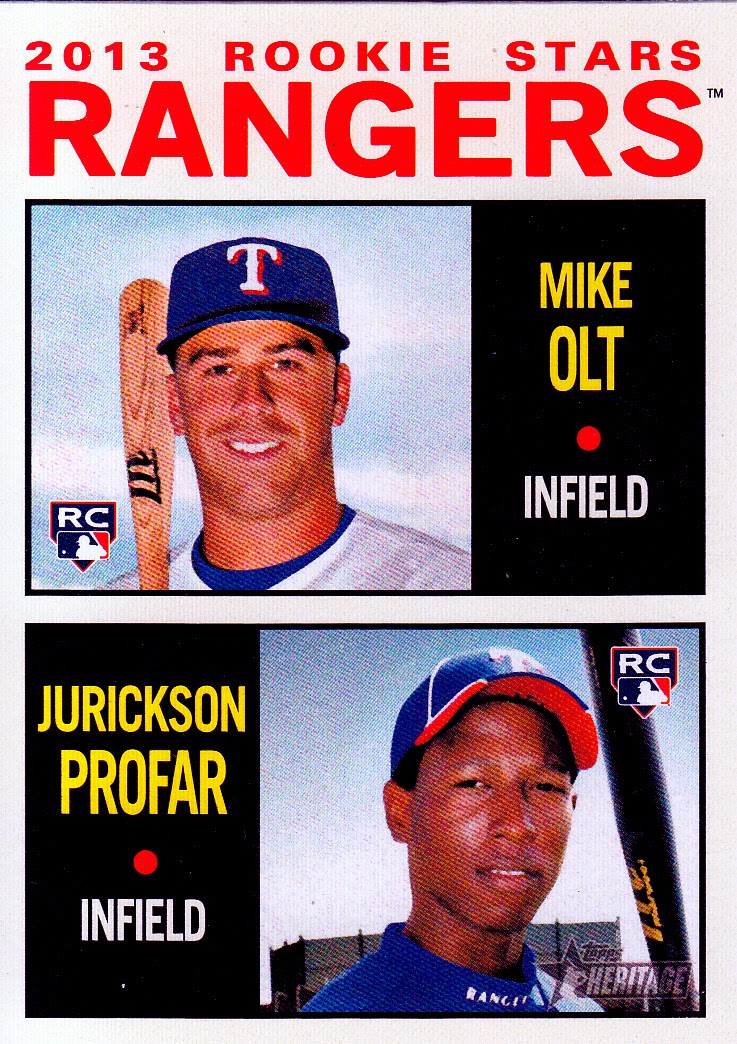 I don't love the multi-player rookie cards; I never have.  But, both of these are noteworthy for their subjects. Machado and Profar might make up the left side of the AL All-Star infield for many years to come.  Both made nice first impressions in '13, especially Baltimore's third bagger. 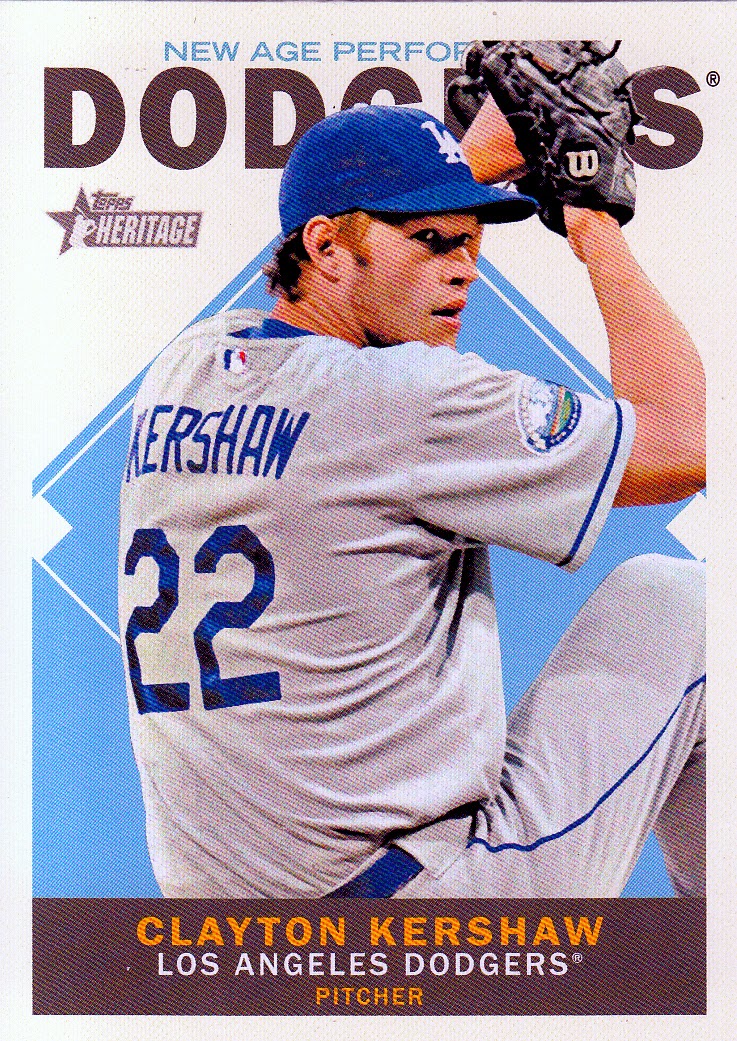 Another insert, but not just for the heck of it.  I definitely favor the New Age Performers above all the other Heritage inserts, and last year's version were maybe the nicest yet.  I have a page of these in my 2013 Heritage binder, and this Kershaw stood out to me the most. 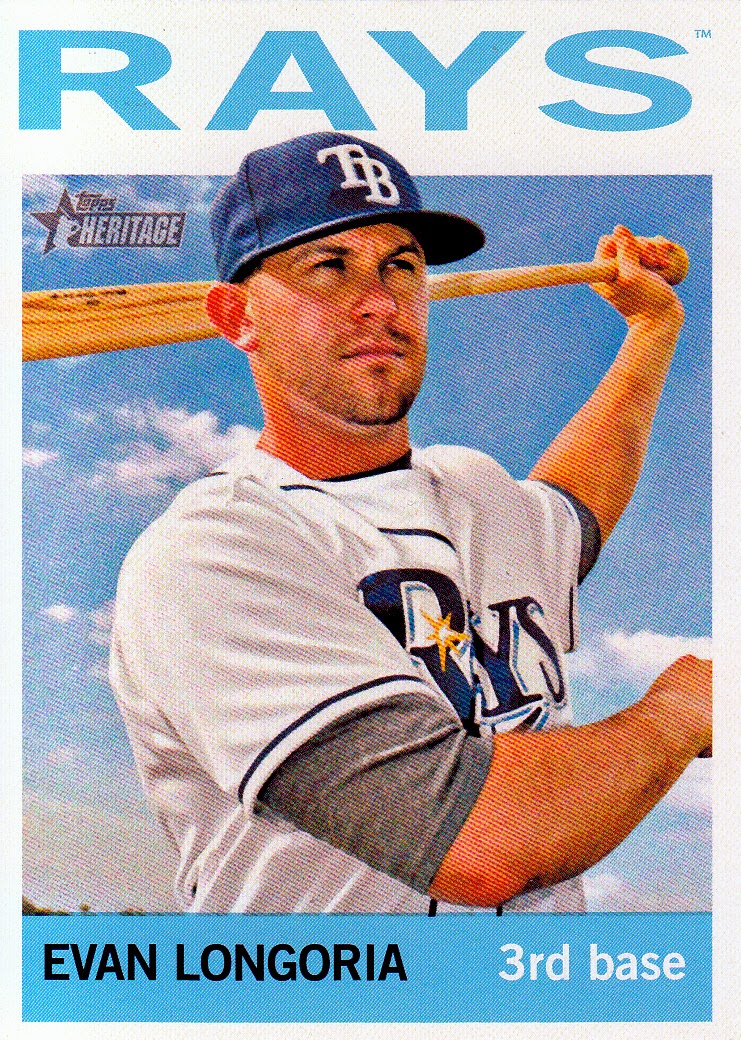 From the short print bank, again.  Lotsa blue sky and a few whispy white clouds make a nice backdrop on the card of perennial All-Star Evan Longoria.  This one perfectly captures the vintage vibe that makes Heritage an awesome product. 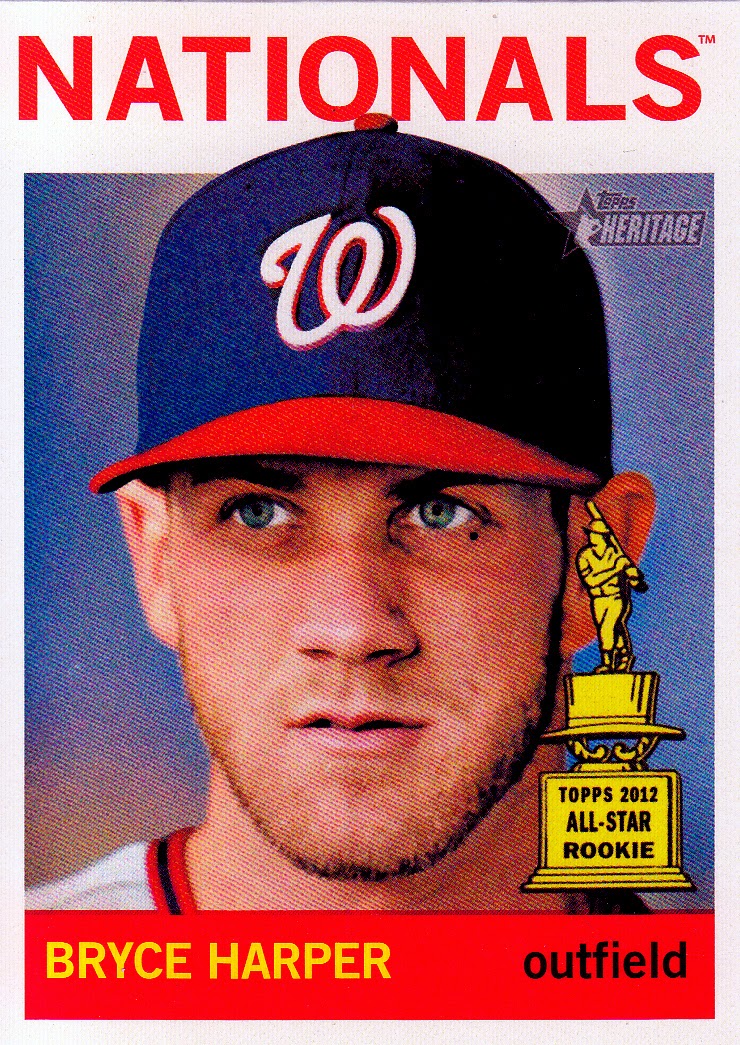 I know, I know.  I'm totally drinking the Harper Kool-Aid that Topps and umpteen others are peddling shamelessly.  But, there's no denying that this is an important and borderline iconic card in the history of Topps Heritage.  Just like this year's Puig card will be.  And since I don't yet have the Trout card from last year's set, you're gonna have to put up with this guy.

So, I wish you all a Happy Heritage Day on Friday.  I know I'll anxiously be hustling off to my local Target right after the whistle blows at the end of the work day.  Whether you're going the hobby box or retail route, may the baseball card gods smile upon you!