Cards from the Shoebox 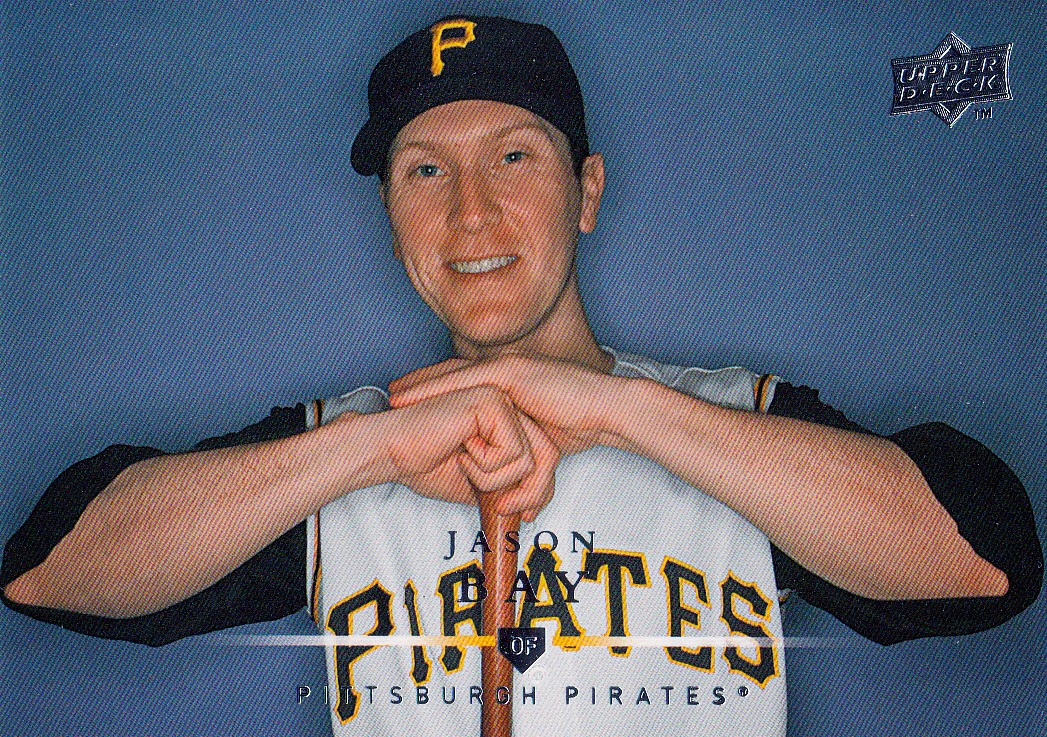 I've been so focused on all things 2014 Heritage lately that it would be easy to neglect my other collecting ventures, such as the All-Time Mets Project or my horizontal card frankenset (which I still haven't formally named, I guess).

Thankfully, one of the true allies of the Clubhouse blog came through to keep me on my point on those aforementioned fronts and quite a few more.

I'm not sure what took so long for it to happen, but I finally made my first cardboard exchange with Shane D. of the Shoebox Legends blog.  I shipped him some Red Sox for his collection and, in return, I recently received a yellow mailer with oodles of awesome stuff inside.  There were Mets cards; cards for my player collections; and even a 1993 Pinnacle fat pack--which I can't bring myself to rip into because it's such a cool collector's item!

But the thing about the collection of cards from Shane that stood out the most was the many amazing horizontal cards.  And that's what I'd like to focus on for this post.

One set in particular that is destined to have the most representatives in my Horizontal Heroes set (that's the working title I'm going with, I suppose) is 2008 Upper Deck.  For one, it's a massive set (799 cards).  But, more so than that, it's loaded with some of the best horizontal cards in the hobby.

The header card for this post is from that very set.  You may not think Jason Bay's '08 Upper Deck card is the most exciting thing you've ever seen, but I'm kind of a fan of those artsy-fartsy posed shots.  Plus, I'm in a Canadian sorta mood watching the Mets and Jays play a matinee in Montreal currently.

Some other '08 UD gems that are now part of my collection... 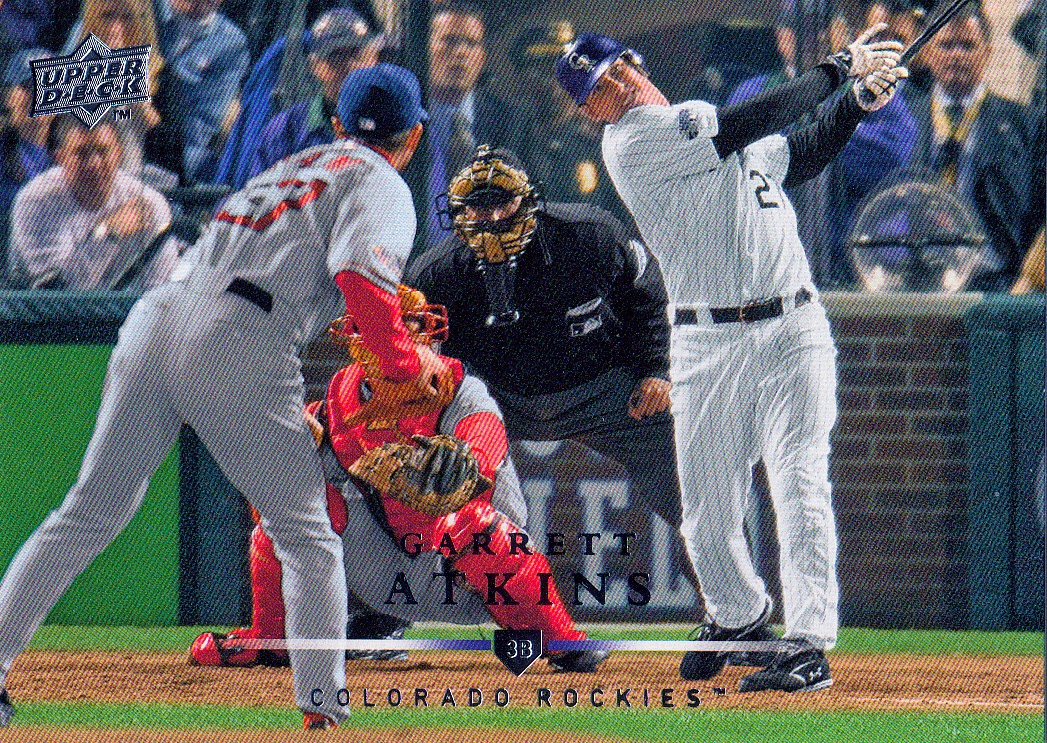 Like the Bay card, this awesome card of Garrett Atkins was among the many cards I set aside in my most recent Just Commons cart.  I guess I can remove it now!  Tons of action on this one; lots to like. 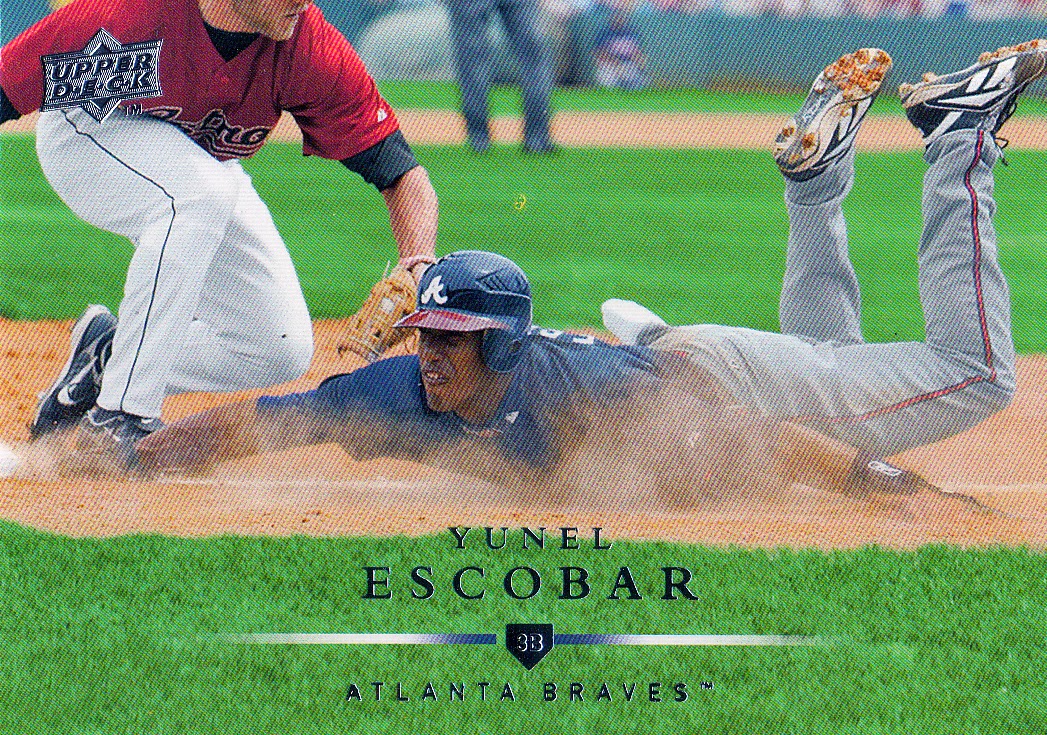 A cloud of dust accompanies Yunel Escobar on his dive back into first base.  Love this one. 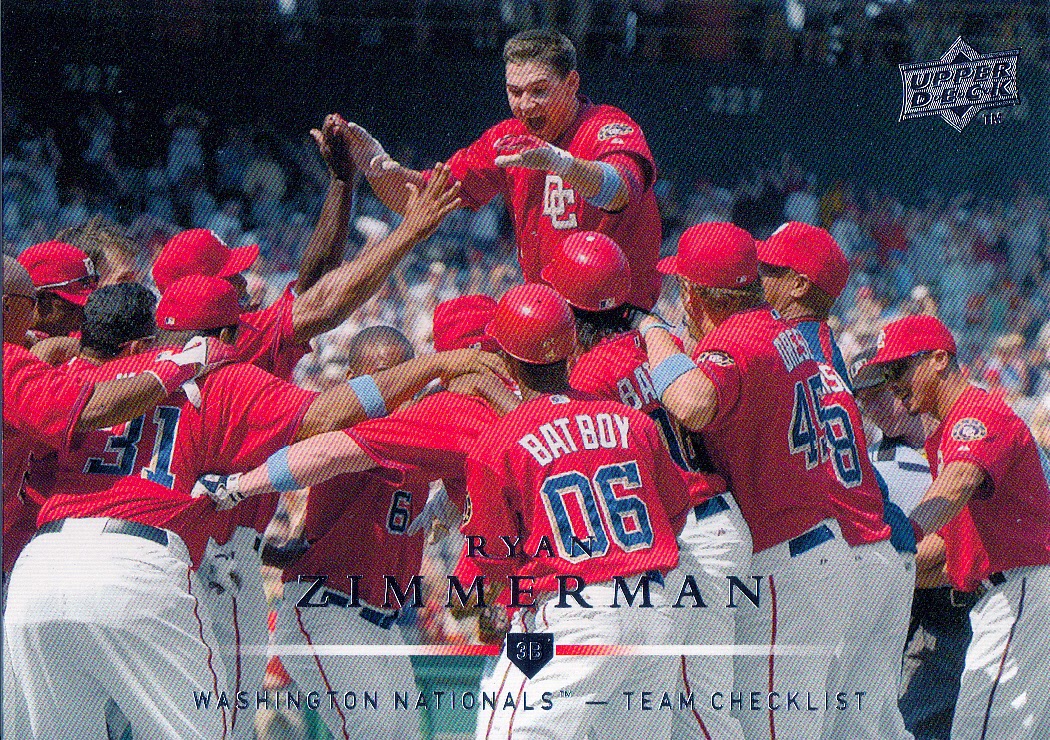 I was very happy to see this card as I shuffled through the stack of goodies that Shane sent.  I have a copy of this one in my Ryan Zimmerman collection presently, and can now add one to my frankenset. 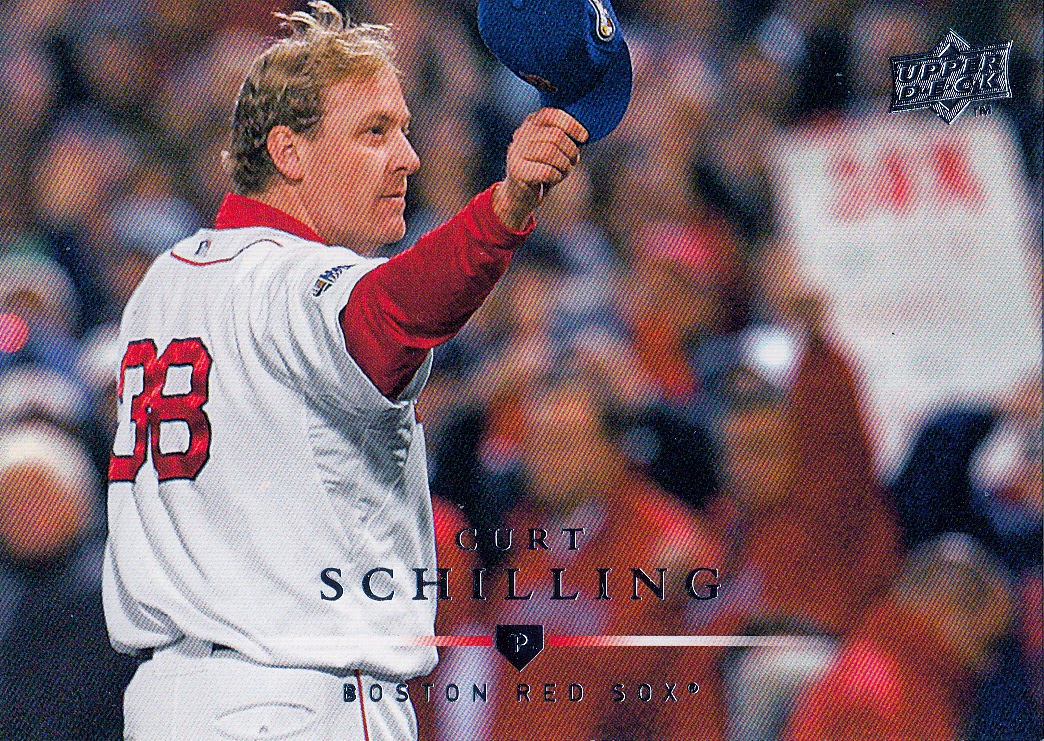 Man, I really dig this card, but it will but placed into my Schilling collection rather than the Horizontal set.  The Sox had some pretty extraordinary cards in '08 UD, that's for sure.  Remember this one?  Still one of the greatest baseball cards I've ever seen.

Aside from the triumphant 2008 set, one of Upper Deck's real crown jewels was its 1993 base set. 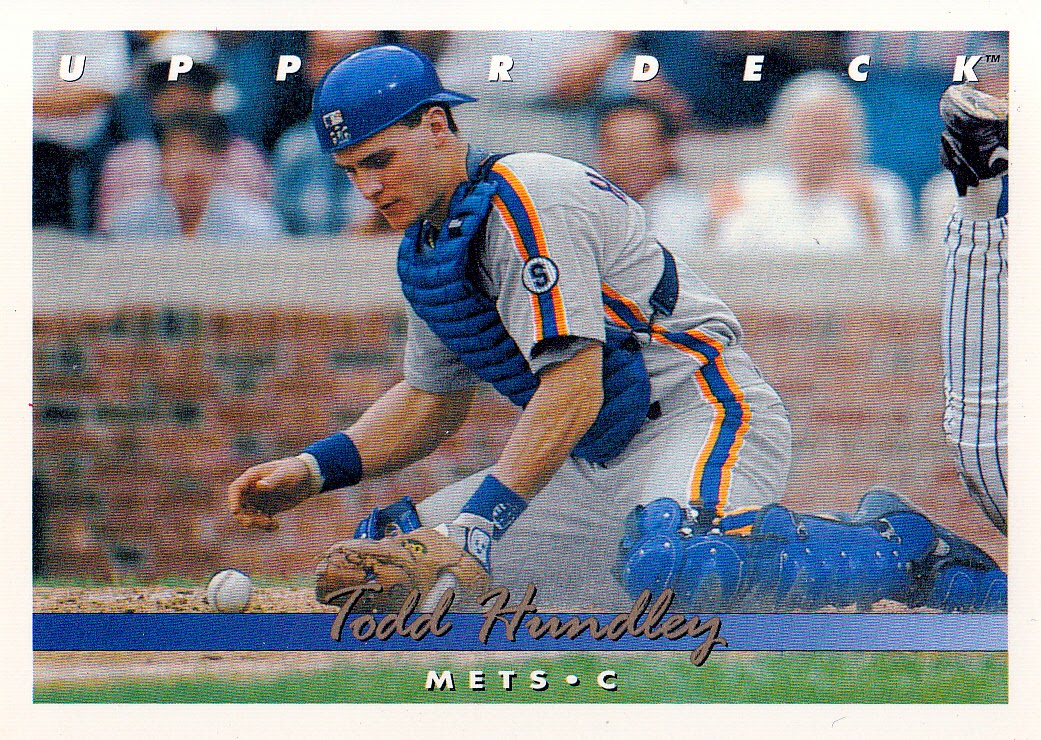 These cards took 'glossy' to an all-new level.  And the photography--especially that of the landscape cards--was second to none.  I've probably looked over this Todd Hundley card a hundred times, but only now do I notice the random upturned leg on the right edge of the frame.  I'm extremely happy to have a spare copy of this to add to the frankenset now! 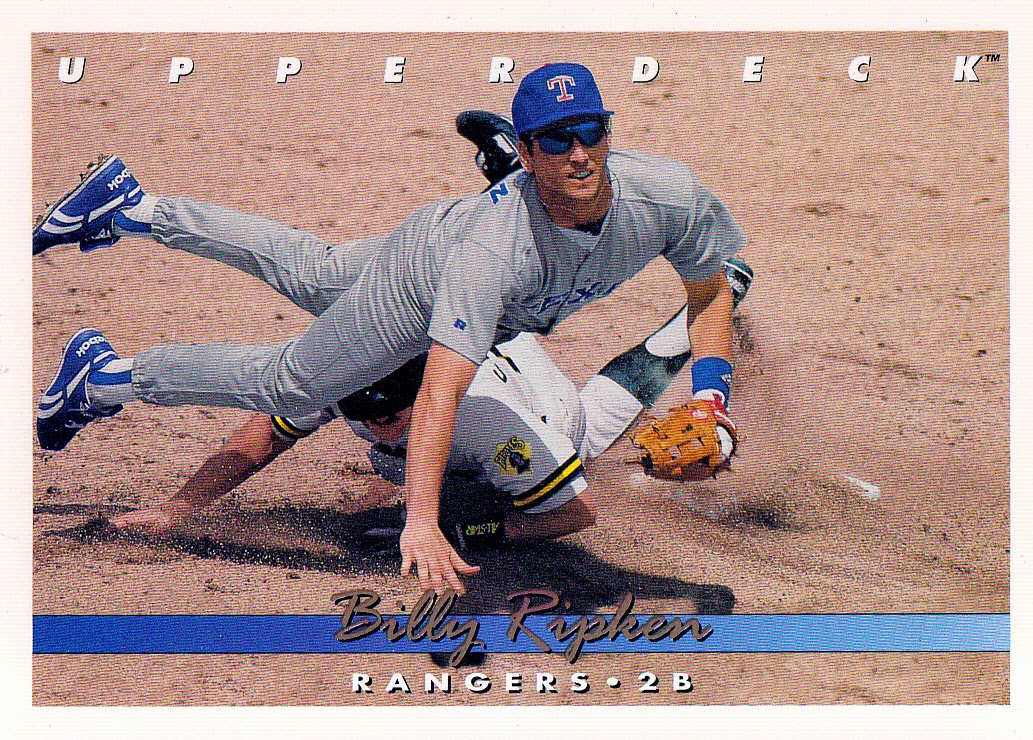 In the pre-interleague days, this is what happened when Rangers and Pirates crossed paths!  This card is a must for my horizontal set, and I believe it might be the second card of Billy Ripken to make the cut. 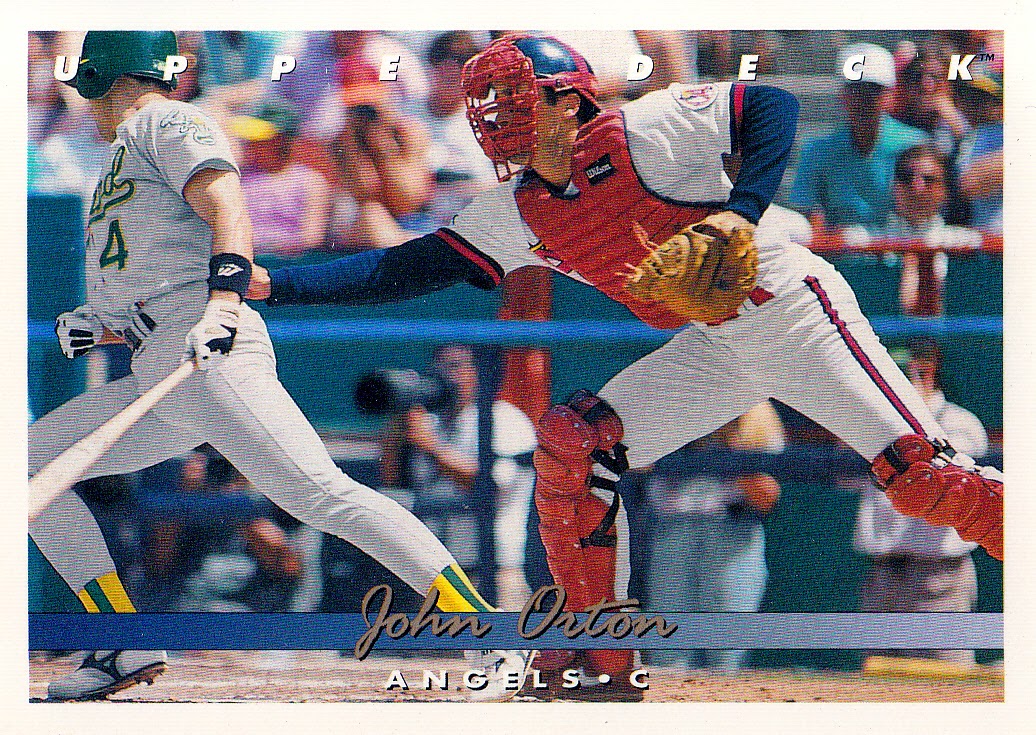 John Orton only played five big league seasons and produced a grand total of 4 home runs in 401 ABs, but none of that matters when cards are being considered for the Horizontal Heroes collection.  Orton is a welcome addition. 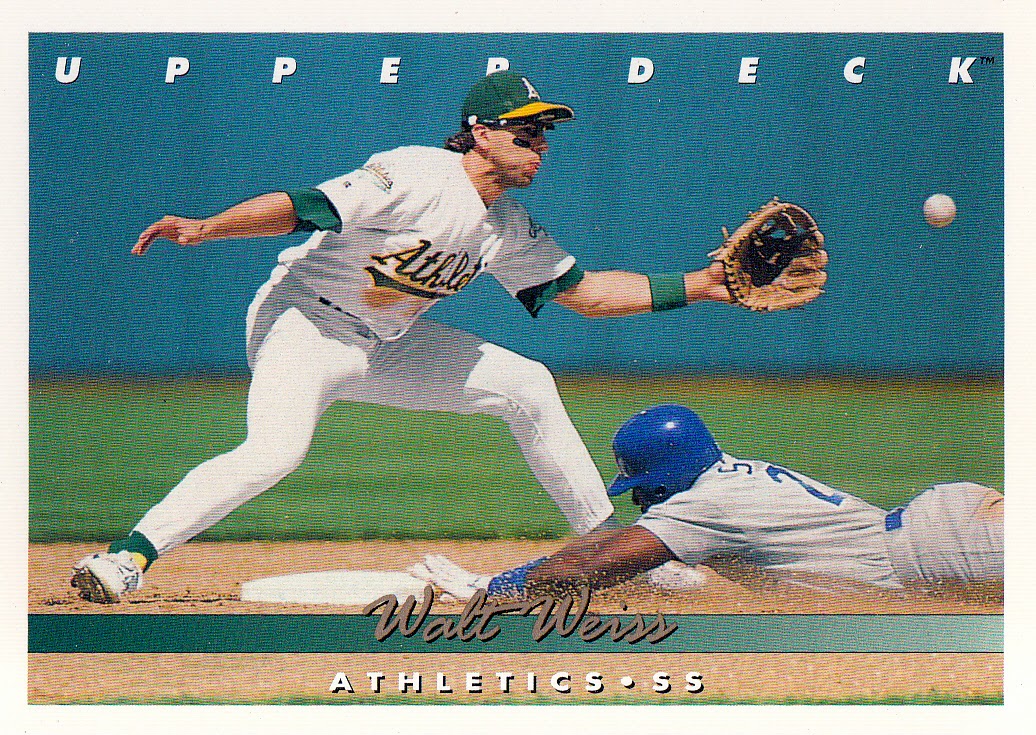 Perhaps the best known or most beloved of Walt Weiss' cards is his '91 Topps masterpiece, but the Colorado Rockies manager was the subject of quite a few more brilliant baseball cards during his time.  This, obviously, being one of them.

Not to be outdone by the competition, Topps played an ace during the '93 collecting season, too, with their Stadium Club offering.  Of course, we all know that TSC offered full-bleed photography that took a back seat to no one. 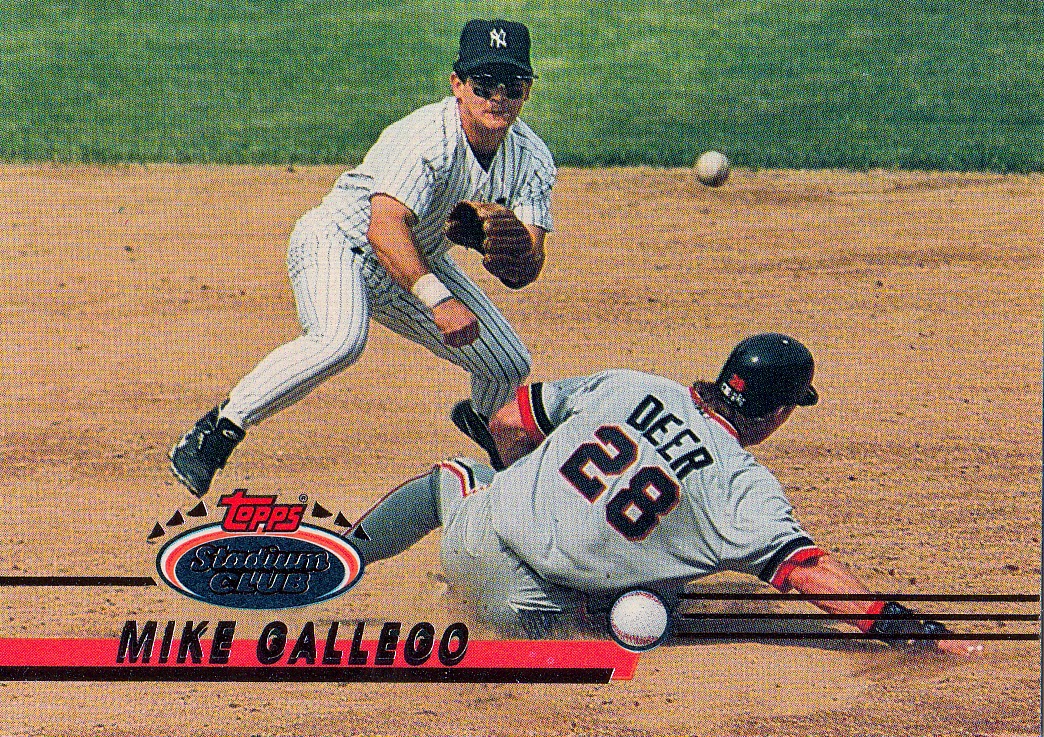 As a Mets fan, Mike Gallego is a Yankee I don't feel yucky about including in any sort of frankenset project. And when he's got a card that looks like this one, it makes the call that much easier. 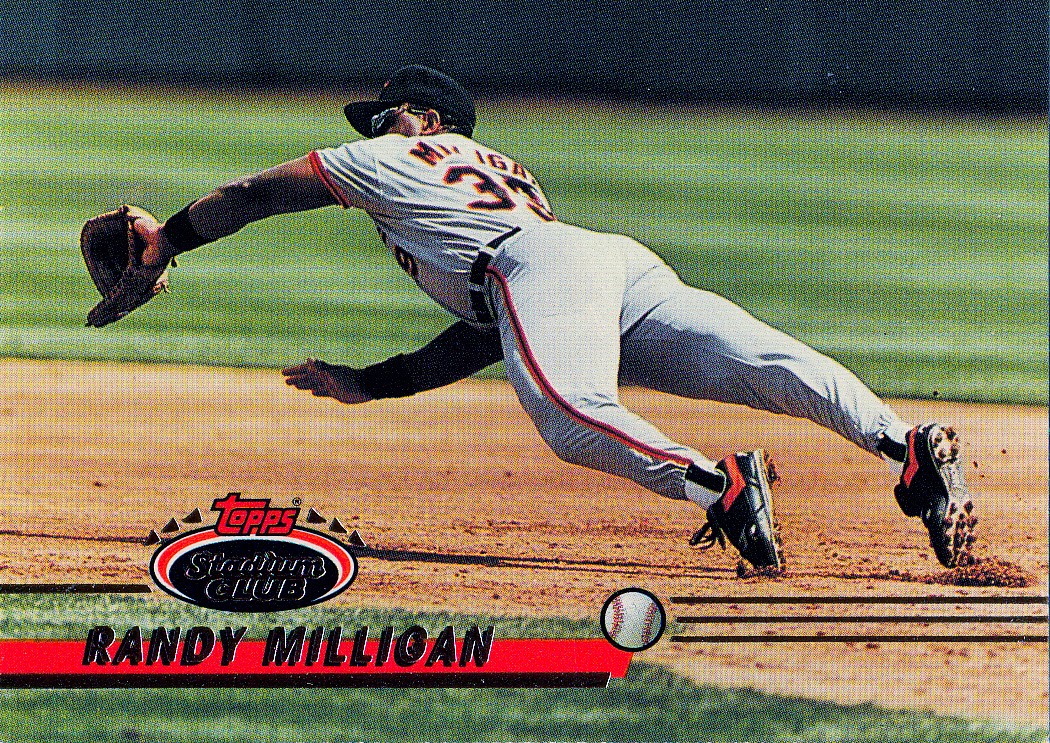 Looking at them now, these cards probably could've done without the little baseball graphic and the gold-embossed jet trail.  Less is more; let the photo do its thing with as little interference as possible.  Still, it's one of my favorite Stadium Club sets of them all since it's the first TSC edition I seriously collected as a kid. 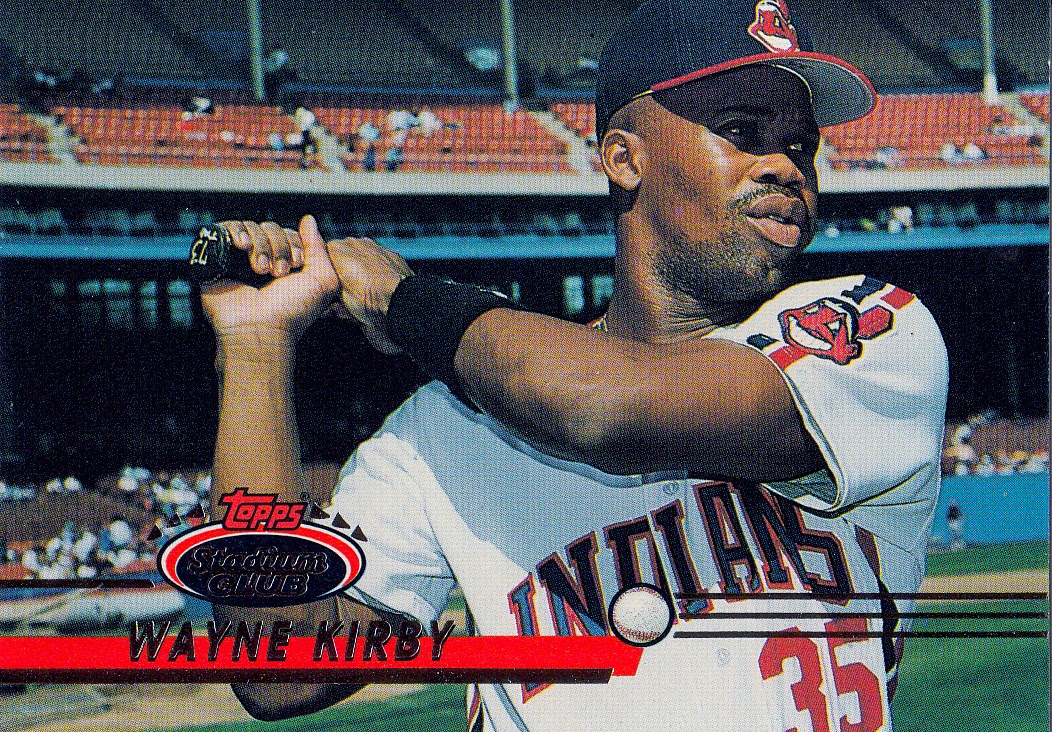 A great horizontal card doesn't have to hold corner-to-corner action or acrobatic feats to be great.  Take this Wayne Kirby piece.  The facade of the old Municipal Stadium in the background makes this card a keeper.

Score brand was always good for some unique horitzontal cards throughout their base sets. 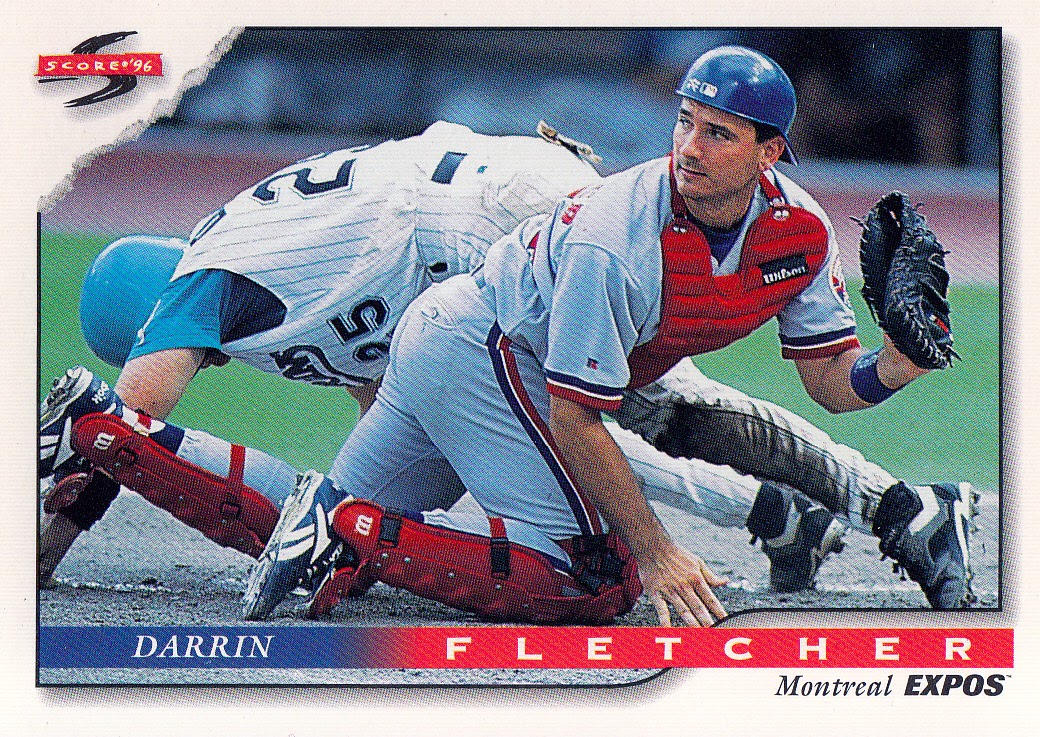 I mentioned earlier that I'm watching the Mets/Jays game being played in Montreal, and one of the on-air guests during the telecast was this guy, Darrin Fletcher.  He was a member of the '94 Expos team that built a 74-40 record before the plug was pulled on the season.  Fletcher was an All-Star for the only time in his career during '94. 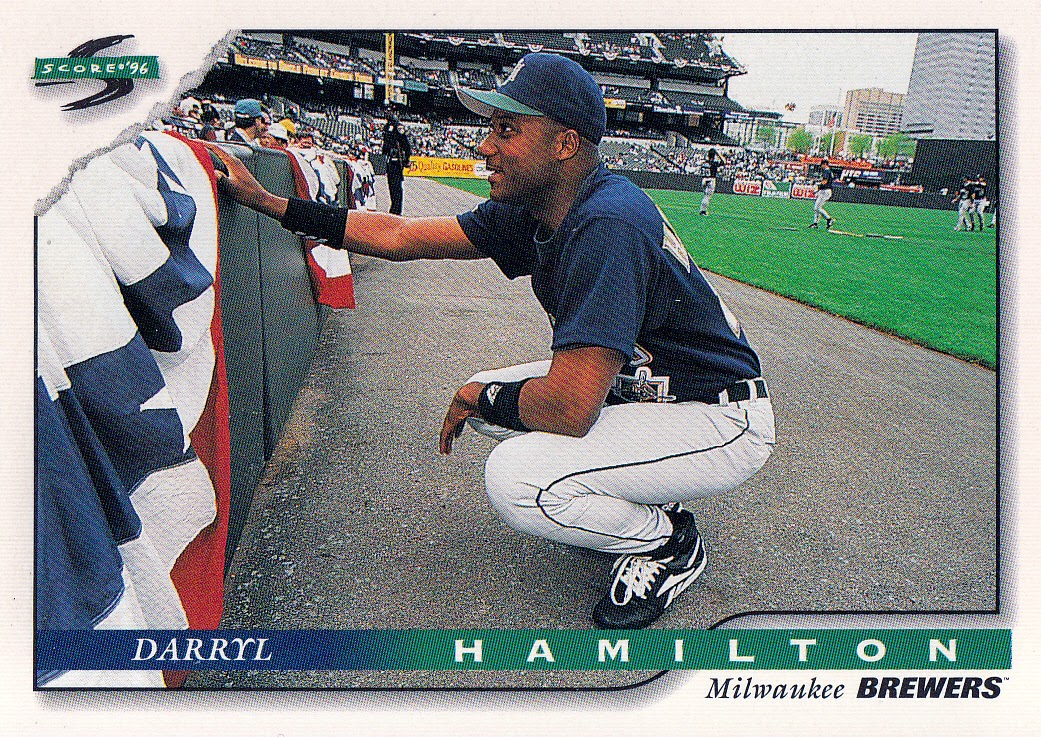 Here's another guy who's been featured on his fair share of landscape cards, a few of which have already made the cut for my collection.  But, of them all, this might be Darryl Hamilton's best.  Here, Darryl takes a moment with the fans at Camden Yards. 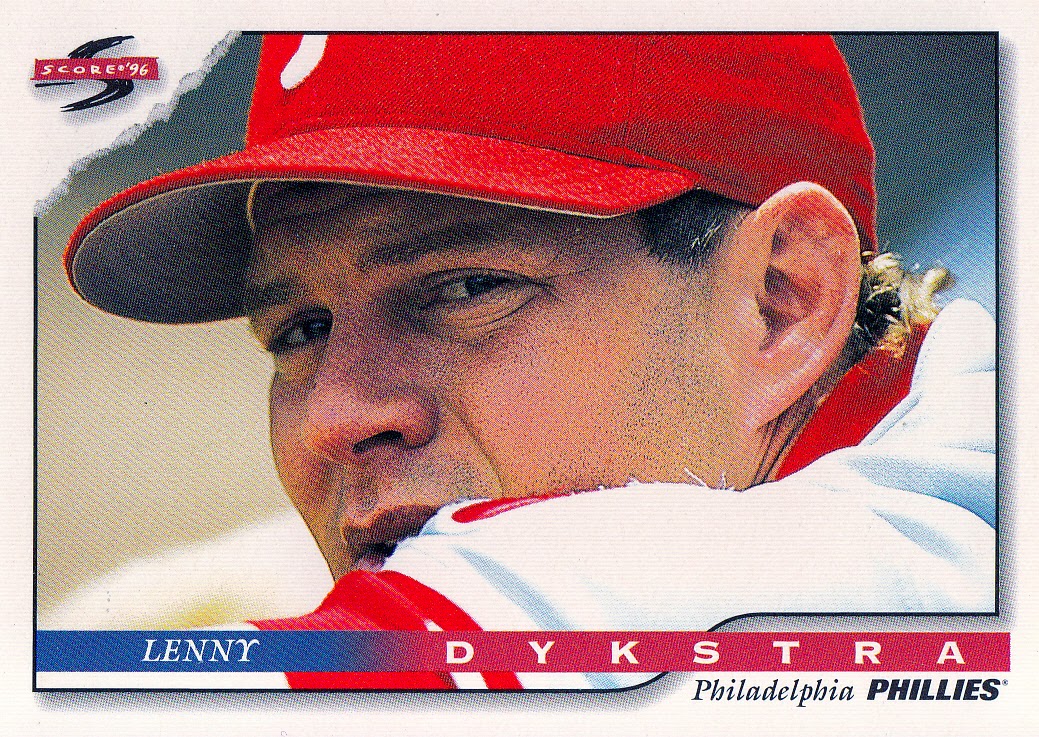 Lenny Dykstra was an intense dude on the ball field, and that's the main reason why I think this is such an effective card of Nails.  Alas, since Lenny is a guy I collect, this'll go into the player collection box.  Not the worst thing in the world, mind you.

In 1994, Fleer began mixing horizontal cards into their base set.  A wise decision, I'd say. 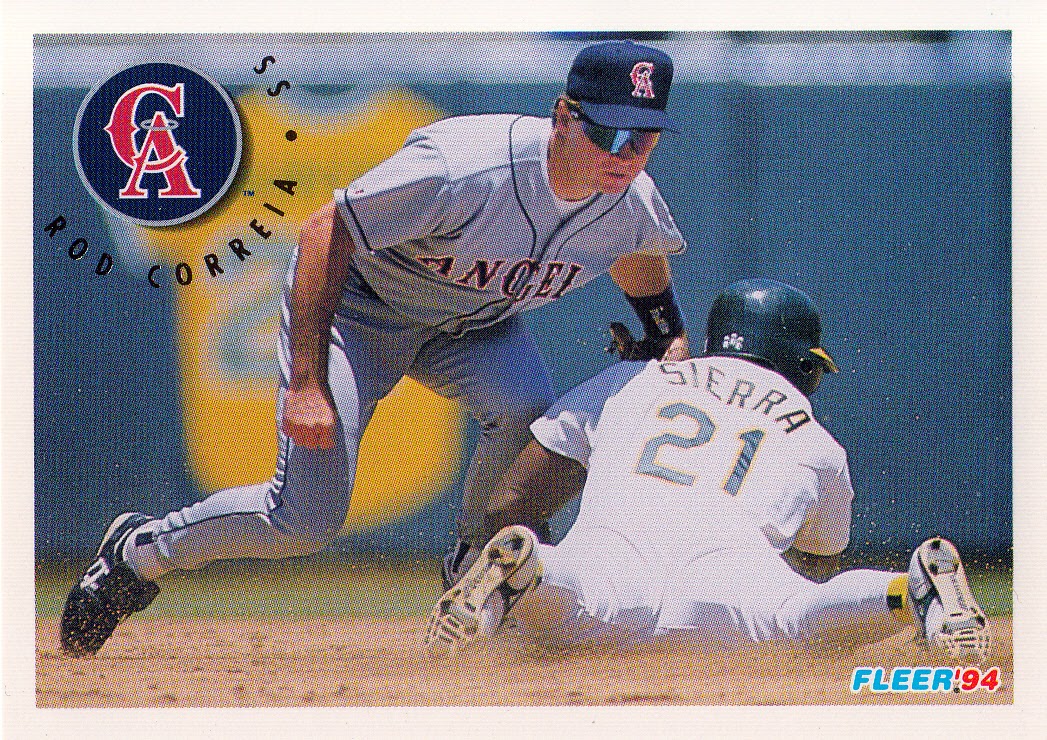 I think I'll go on record and state that '94 Fleer is the best set Fleer ever produced--not counting Ultra, of course. 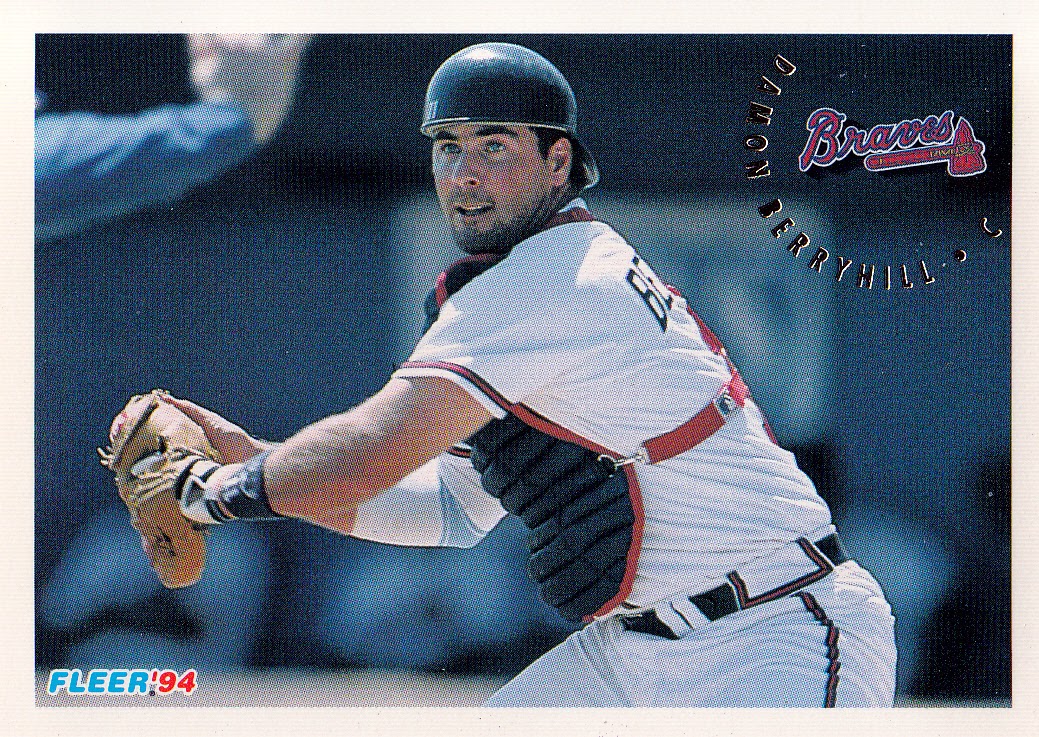 It's a shame that all the cards within unopened packs of mid-90's product are probably glued together thanks to the super-glossy, over-the-top sheen that these babies were coated with.  Otherwise, I'd love to bust a box of '94 fleer. 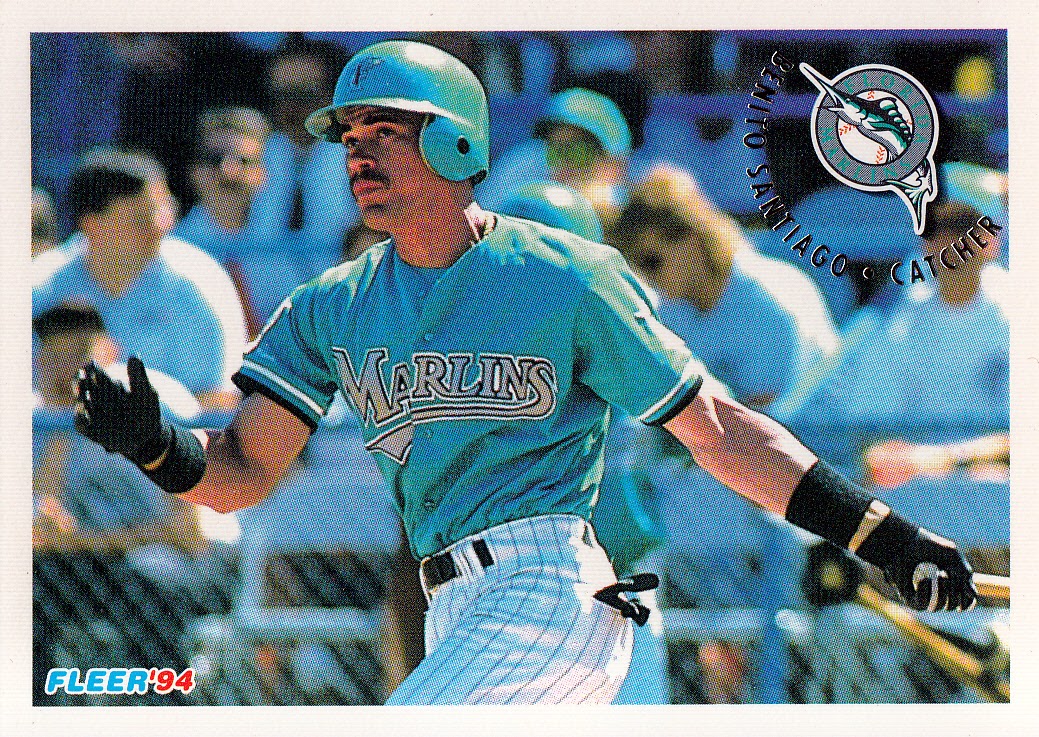 This'll probably be my second card of Benito Santiago to make the set.  But that was Benito the Padre and this is Benito the Marlin. 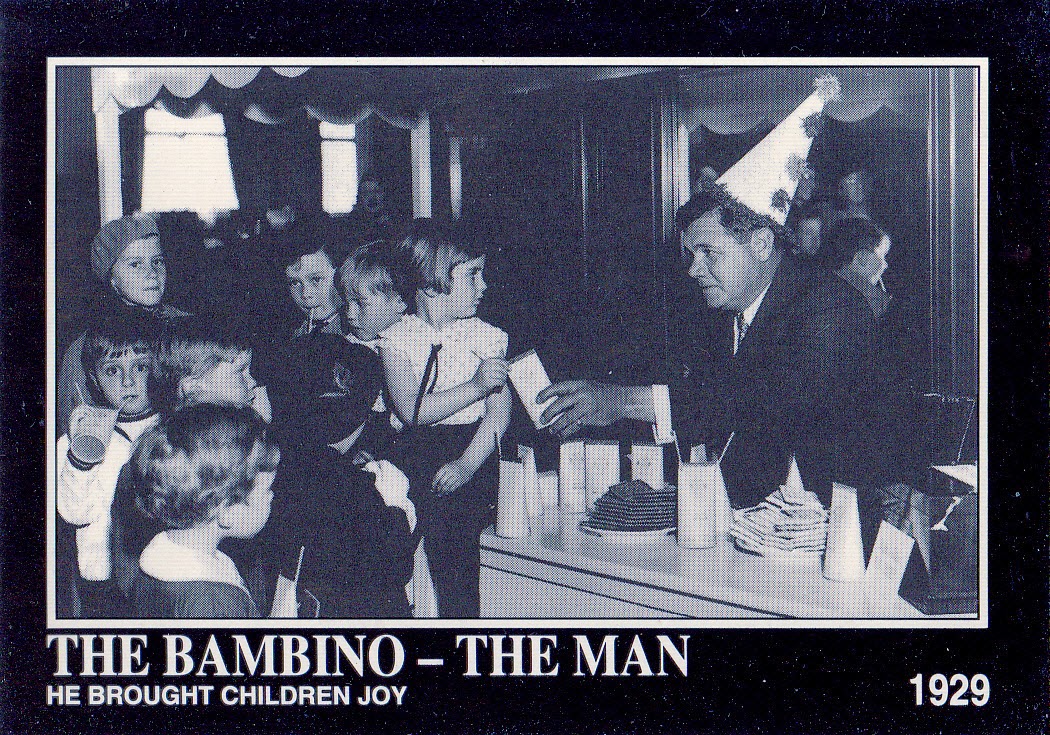 It's true: Babe Ruth brought children joy with his big heart and his power-packed bat.  And now he'll be bringing joy to my horizontal card frankenset with this beaut.  A most appropriate card to wrap up the post, don't you think?