Chrome Is Where the Heart Is 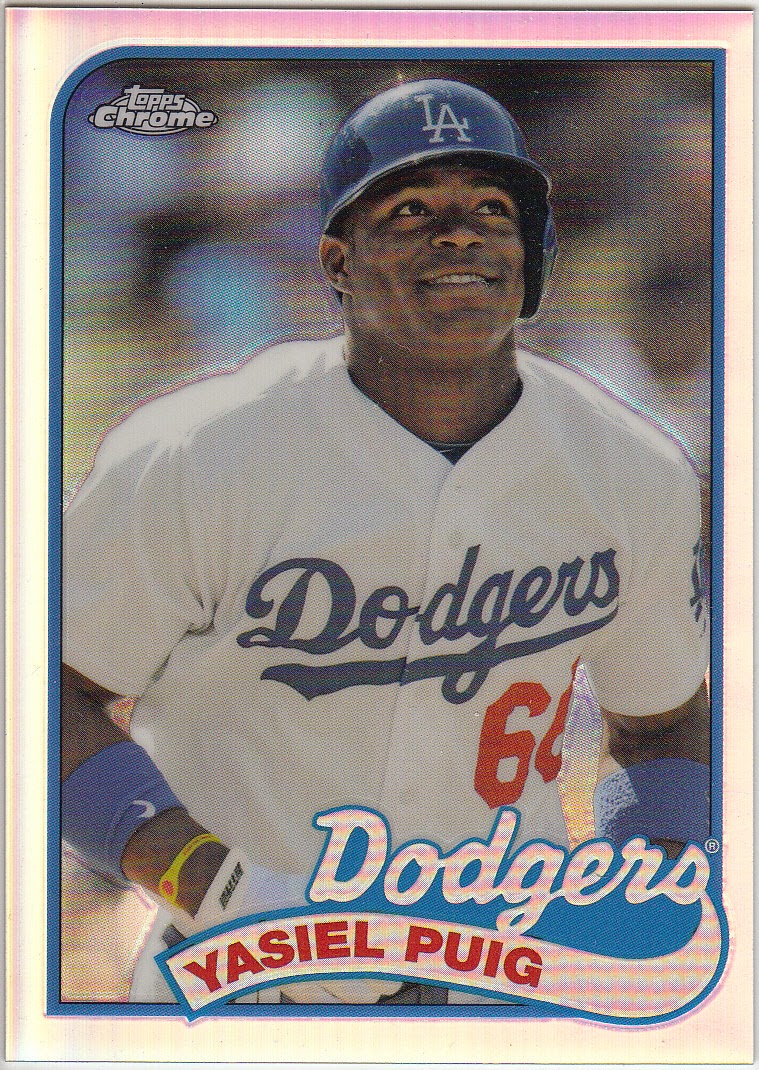 It's been quite a while since I purchased baseball cards in traditional fashion, meaning via boxes, hangers, blasters or packs.  I kinda (read: really!) miss it, but with our family budget the way it is these days, getting six random cards that will most likely disappoint me for $3.99 a pack ain't very appealing.

Instead, I've taken to eBay on a few occasions when I really need my fix.  Heck, if I'm gonna shell our four or 10 or 20 shells, I better be getting the biggest bang for my buck, right?

Well, one of the new and shiny 'toys' that has been on my radar for some time now has been Topps Chrome. More specifically, the 1989 Chrome Refractor inserts.

Yep, it's a well-documented fact that I'm a junkie for anything pertaining to '89 Topps, as it's my all-time favorite set.  So my hobby senses went bonkers when I learned that Chrome had devoted a 25-card insert set to my beloved '89 design in stunning refractor form.  My heart was instantly warmed and I knew I had to get 'em in my collection some way, some how.

I didn't take my long to track down an auction for a complete set of the lovely refractors for considerably cheaper than the cost of a blaster. 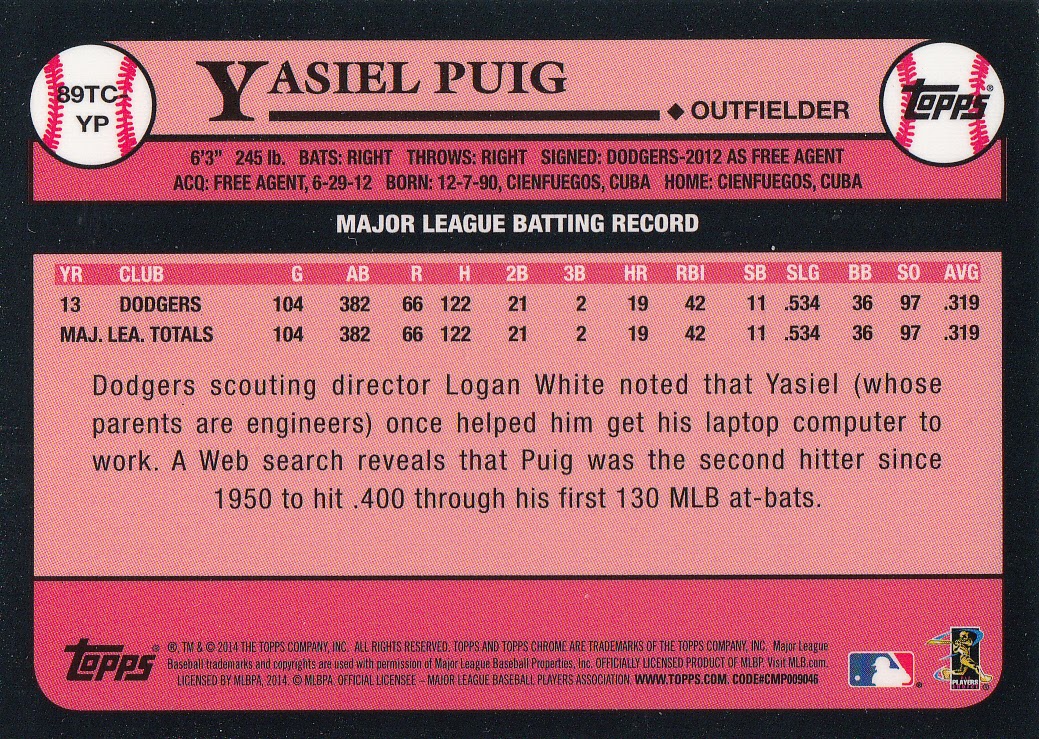 As you can see, the fronts and backs of the cards stay true to the spirit of the '89 design, even if the player name within the swoosh is left-aligned instead of being centered.  Somehow it's not as noticeable on these as it is for the cards in the Archives set.

Anyhow, I couldn't be happier with the way the cards look, especially when I slipped 'em in to binder pages.

Here's a peek at what they look like, arranged alphabetically by the suffix in the 'card number'.  In this case, that suffix would be the player's initials. 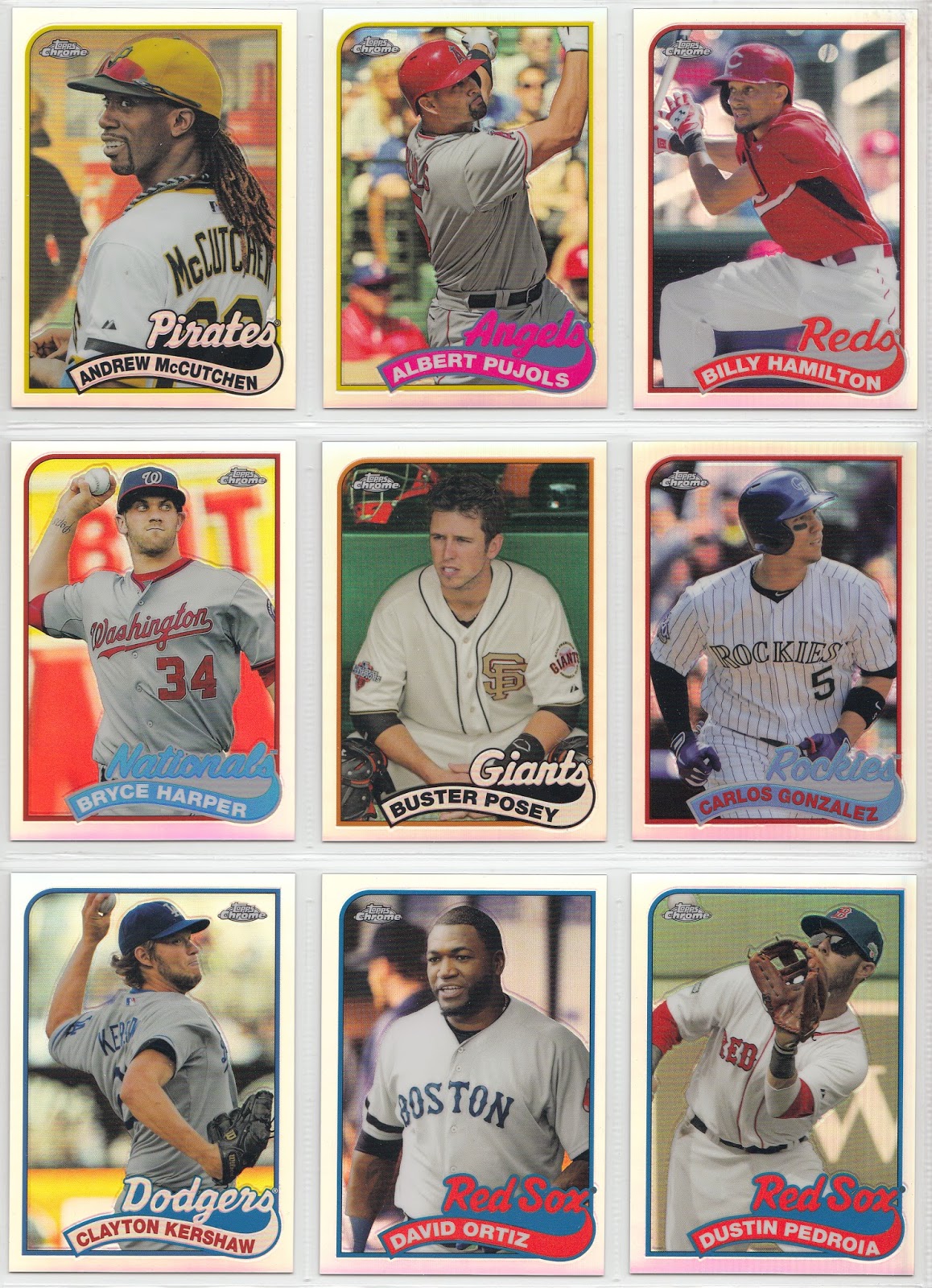 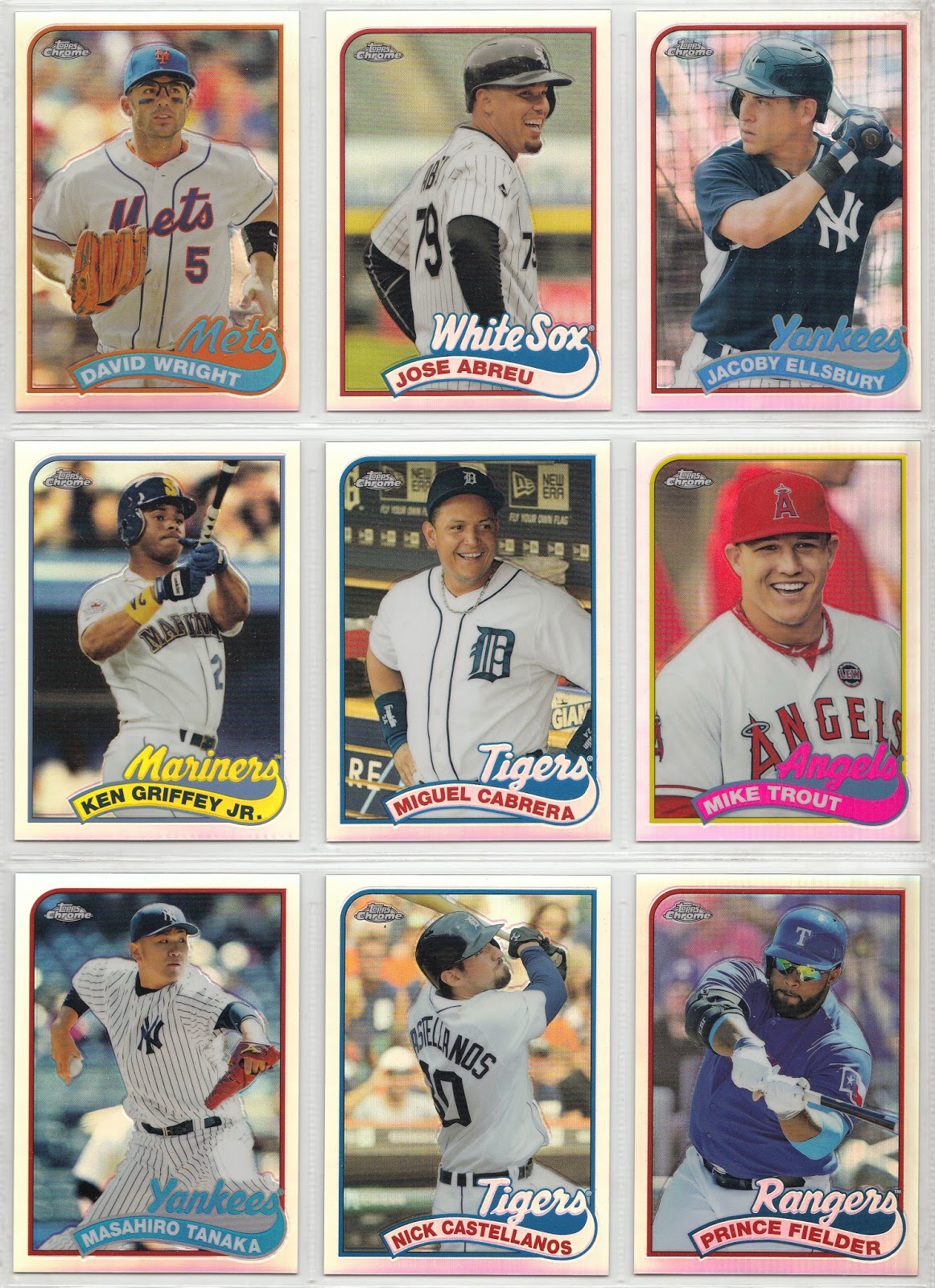 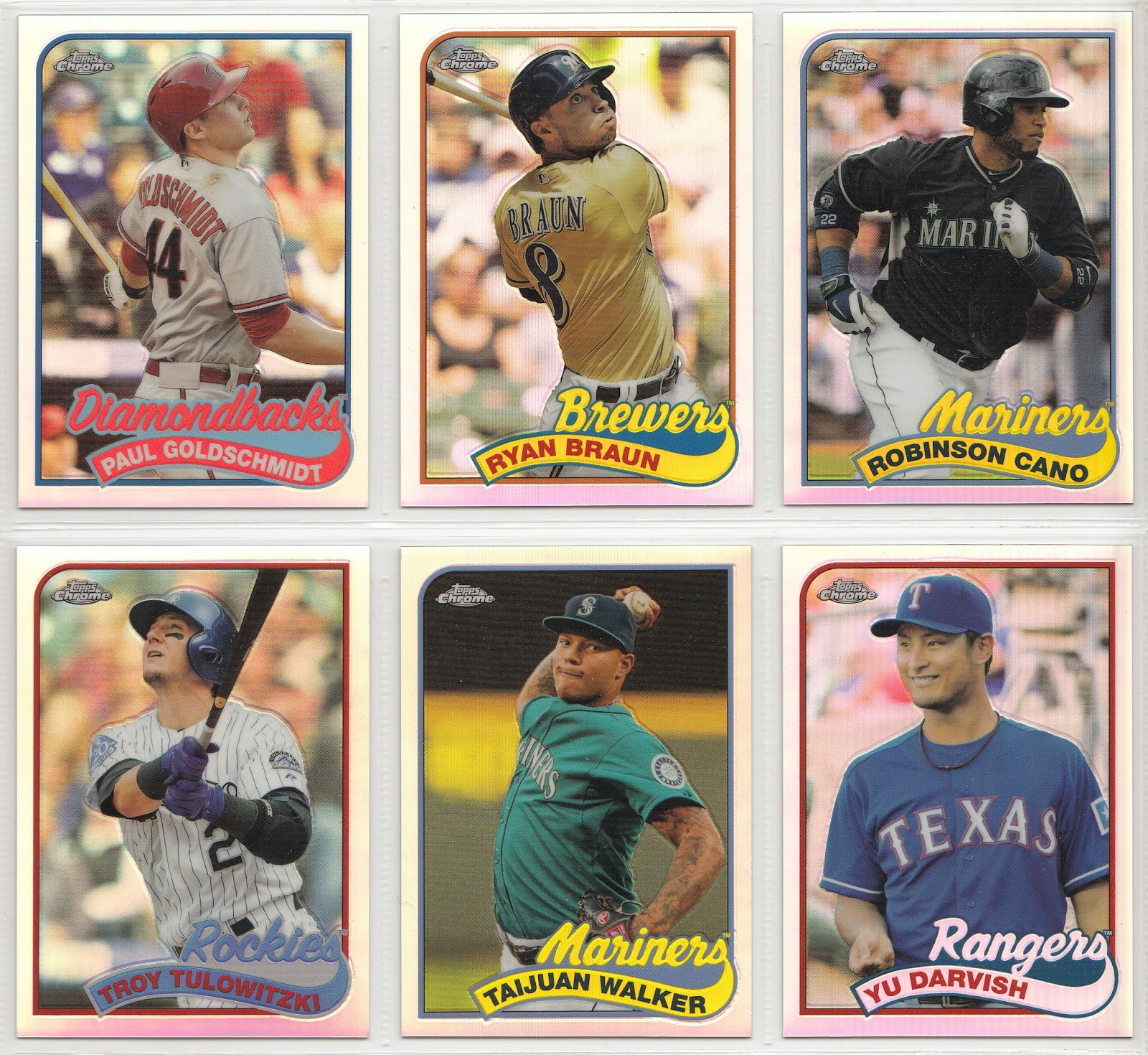 And, of course, the Yasiel Puig card would be the final one of the set, so the final binder page is left with two blank pockets.  Hey, it beats having that one orphan card taking up an entire page.

Some impressions of the set, which features a pretty decent mix of players both veteran and new:

Biggest Star in the Set:  Obviously subjective, but Trout is essentially the 'face of baseball' these days, so I'll give it to him.  Kershaw is pretty good, too, I hear.

Biggest Omission:  Uh, Jeter? Shocked that we didn't get our mandatory dosage of RE2PECT.

I'm Suprised He Was Included:  I guess this isn't the most flattering category, and this guy might be a future ace, but I'm sorta surprised that Tijuan Walker was chosen for the checklist.  And, to be fair and not pick on the rookie, how about Cargo and Tulo?  Always hurt and they play for a bad team.

I Wish He Was Included:  Gotta be Jose Fernandez, my favorite non-Met.

I Wish He Wasn't Included (aka Please Stop):  No more Ryan Braun. Please.

Most Important Rookie:  Abreu and Tanaka are both high-profile, sought-after rookies.  Flip a coin.

Meet the Met:  Indeed, David Wright made the cut.  Somewhat surprising given his apparent fall from stardom, but, hey, he plays in NY and he's a handsome devil.

The Only Retired Player:  Only one, and it's Junior. Makes sense to me, though, since his '89 Topps Traded cards is one of the greatest cards in the history of mankind. Along those same lines, it woulda been neat to have included a a few of the other key rookies from the '89 set, such as the Big Unit, Craig Biggio or John Smoltz.

Department of Redundancy Department:  Photo recycling alert!  Since I'm a Mets fan and Wright collector, I immediately I knew the DW was a recycled image (2013 Archives).  That's the only one I'm sure of, but I suspect one or more of these photos have been around the block.  The Goldschmidt and Prince photos look very familiar.

Best Captures the Essence of the '89 Set:  The Posey, Trout and Miggy cards each feature photos which I feel would seamlessly fit into the style of the '89 set.

How Many Mariners? Oh:  Yup, three M's.  Can't argue with any of them.  Well, actually, I guess I already did with Walker.

So now that I've got this set out of the way, my next objective is to start attacking the die cut minis from this year's Series 1, 2 and Update.  That's 150 cards to track down.