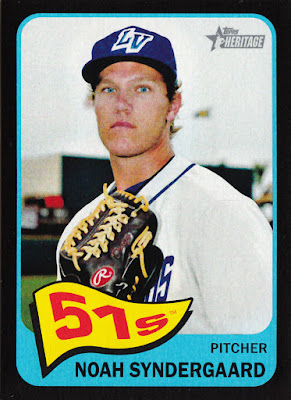 What is it about Mets pitchers and superhero nicknames?  Some fans (not me) gravitate towards the whole "Dark Knight" thing for Matt Harvey.  Meanwhile young phenom Noah Syndergaard has been donned "Thor" because of his Nordic heritage and, well, his 'hammer' of a curve ball.

Anyhow, a fashionable hashtag on days when Syndergaard pitches is Thorsday.  Get it?  Yeah.

Nicknames aside, the kid's got the stuff of an A+ front-line starter.  Four pitches including a fastball that tickles triple digits on the gun.  Thor was on his game on Monday night, stifling the hottest lineup on the planet when he allowed just two hits over six frames with 11 Ks versus Toronto (his former organization, by the way).  A no-decision for the youngster, but the Amazins wound up winning it in the 11th.

The card you see above is a black parallel of Syndergaard's 2014 Heritage Minors card.  It's one for which I've been combing eBay for quite some time.  I stumbled upon this one for five bucks shipped, and I quickly claimed it.  Heck, it's tough to find the regular short print for that price. 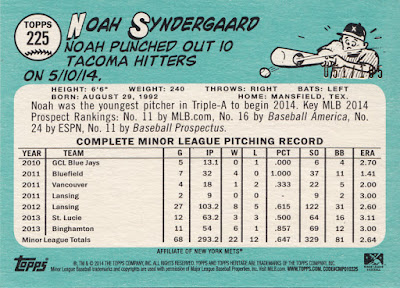 Oooh, if that doesn't scream "ebay 1-of-1" then nothing does!

Anyhow, it's a great card and one that I'm thrilled to add to my collection!