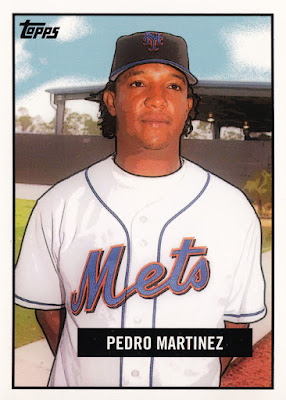 Welp, I officially cracked the 6,100 barrier with my Mets collection recently. I know I've stated my thoughts on this numerous times, but that's pretty amazing for someone who wasn't much of a team collector up until a year or so ago.  Sure, I've always had a lot of Mets cards since they are my lifelong team, but I wasn't as driven about grabbing Mets cards at shows or trading for them or purchasing them from websites, etc.

I've had tons of help during this process with too many fellow bloggers and collectors to name.  A real linchpin of my metamorphosis has been Shane of Shoebox Legends, since he turned me onto Zistle which opened the door to trading on Zistle, thus leading to even more Mets card acquisitions with greater ease.

And, well,  if you even semi-regularly read my blog or his, you know we've been having a lengthy back-and-forth with the PWEs for quite some time now.  Red Sox outgoing, Mets incoming.  It's a wonderful relationship!

My latest delivery from Shane was impressive, as they usually are.  In the lead-off spot, you see Pedro Martinez's 2008 Topps Trading Card History insert.  It's my 66th different card of Pedro as a Met. 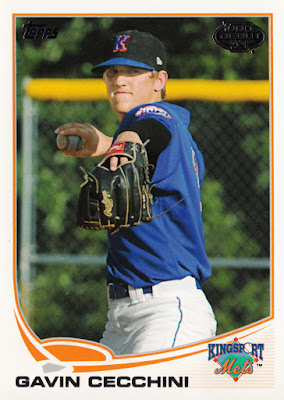 On the other end of the spectrum, this is just my third card of former first-round draft pick Gavin Cecchini, who is currently at Double-A Binghamton.  The Louisiana native is batting .327 with four homers and 23 RBIs for the B-Mets.  After three somewhat disappointing pro seasons, Gavin is finally showing the promise that made him the 12th overall pick in 2012.  And, he plays shortstop, a position that continues to be in a state of flux for the big club. 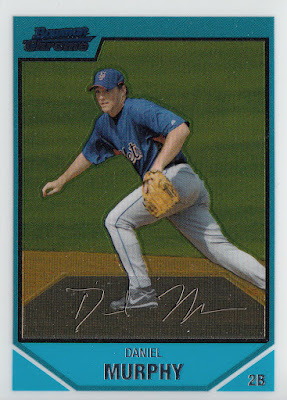 This was an exciting card to find: a Daniel Murphy rookie!  My first "true" rookie of Murph who, unfortunately, looks to be heading to the DL.  What else is new for the Mets, right? 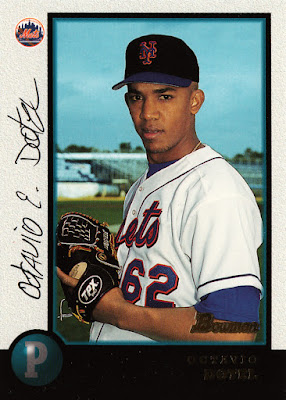 This one was on my Zistle want list.  Many have probably forgotten or never knew to begin with, but the well-traveled Dotel began his Major League journey as a New York Met back in 1999.  He won eight games for the Amazins that year, mostly as a starter. 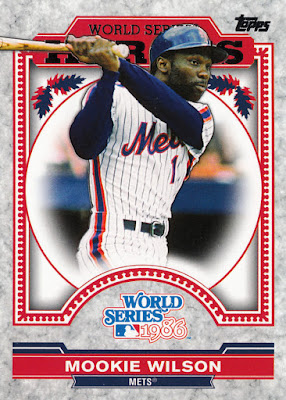 I love Mookie.  I still do.  As a youngster, how could you not love a ballplayer on your favorite team who was named Mookie?  Plus, y'know, he was good!  But, honestly, as notorious as it was, Mookie's grounder that went through Buckner's wickets doesn't make him a World Series "hero."  He just happened to be a pawn in the most infamous World Series boner of all time.  Am I being too harsh a judge of history?  I mean, yes, he still had to make contact and force Billy Buck to perhaps rush the play due to the Mookster's outstanding speed, but...  C'mon.  Anyhow, cool card!

First we have vertical Jose... 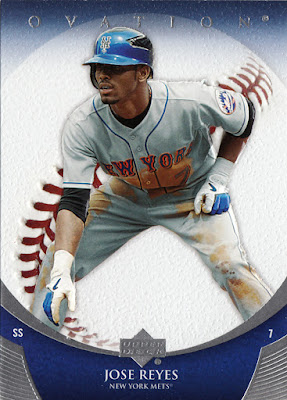 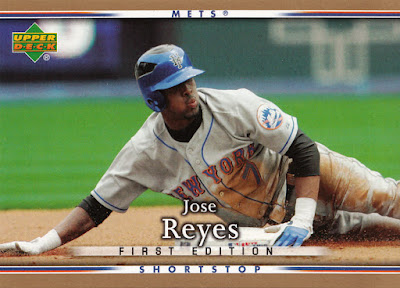 That makes for 166 unique Jose Reyes Mets cards.  Which is probably not even a dent in the surface of what's out there!

Finally, a two-spot from the Kid... 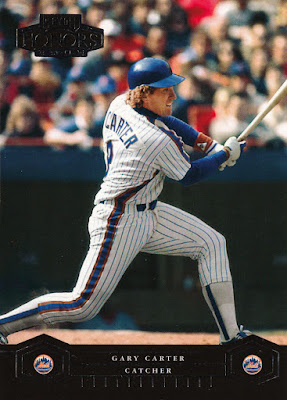 Lots to love about the photo choice for this card, but most of all I love the very serious stirrups Carter's got working. 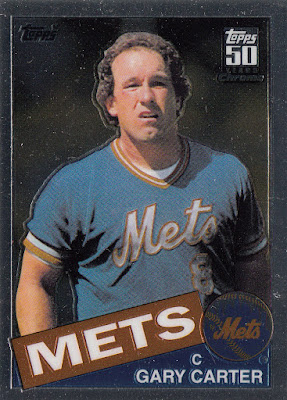 And a 2001 Chrome reprint of Gary's '85 Traded card.  This card made me stop to consider which Topps Traded card of a Mets player was the most important or iconic of all-time.  This one has to be up there somewhere, right?  Okay, a couple of guys name Gooden and Strawberry might have the two top spots sewed up, but this one is pretty damn important, right along with Keith's '83 Traded card.

As always, thanks for keeping the train rollin' along, Shane.  Always a treat!