They're Comin' Fast and Furious! 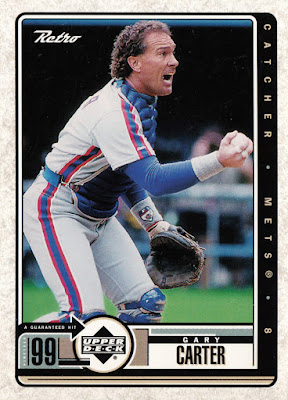 The PWEs from my buddy Shane at Shoebox Legends have been coming at a pace so frequent and furious that it's getting hard for me to keep up!

Now that is the definition of a First World problem, is it not??

So, rather than delay my gratitude any longer, lemme bundle the last two PWEs -- both extraordinary, as usual -- into a Hump Day two-fer special.  (I hope this doesn't count as cheating!)

To start things off, a Gary Carter card that will probably kick the ass of any Gary Carter card you've seen before.  The past few years Topps has made me leery of any 'new' cards of the Kid since they keep kicking around the same two or three photos of a man who played nearly two full decades in the bigs.  But, this one--from 1999 Upper Deck Retro--blows all of those half-hearted Topps efforts out of the water.  This is probably the most intense picture of Carter to grace a trading card.  I love it!!!

A tough act to follow, but Gary was just one of 10 super cards from the eldest of the PWEs from Shane. 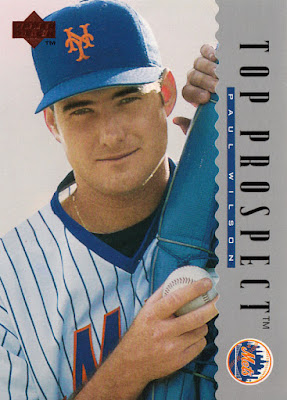 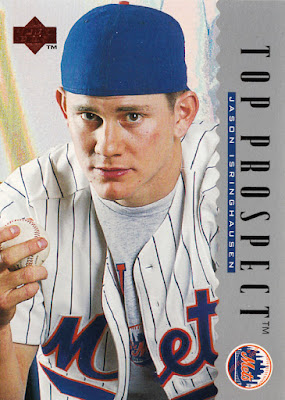 Ah yes!  Two thirds of the infamous Generation K from the mid-90s in Flushing, NY (the other third would be Bill Pulsihper, of course).  If there is such a thing as karma, the Mets' present-day collection of young pitching studs will each go on to have long, All-Star careers. 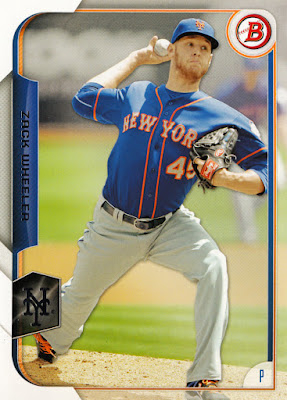 Naturally, Wheeler succumbed to the Tommy John virus earlier this spring, just as Matt Harvey did midway through the 2013 season.  What was I saying about karma again??  On the bright side, Harvey is back and looking sharp this season, so hopefully we'll see a better-than-ever Wheels midway into the 2016 campaign. 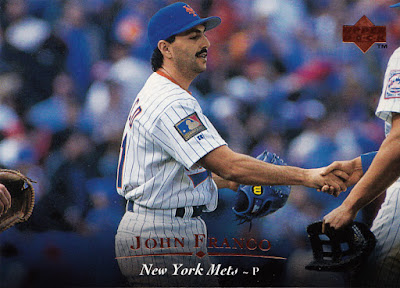 An awesome horizontal card of Johnny Franco featuring some congratulatory handshakes.  Not nearly enough of those happened in 1994.  Then again, the guy did lead the league with 30 saves in '94...and that's for a team that won just 55 games that season! 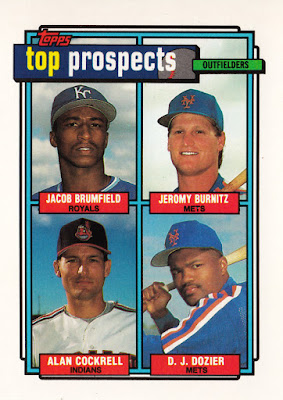 By far, Jeromy Burnitz wound up being the best Major Leaguer of this lot of '92 prospects.  An interesting note on Dozier, however, is that he played 43 games in the NFL as a running back for the Vikings and Lions, scoring nine career touchdowns over five seasons (1987-91). 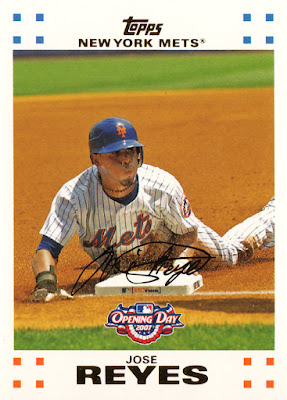 The Mets are in the midst of a four-game, split-site series with Toronto.  That means Jose Reyes and R.A. Dickey--the latter getting the nod for the Jays in the Thursday finale.  It's still kind of odd to see Jose playing for another club.  I thought he and David Wright would be Mets teammates for their entire careers. 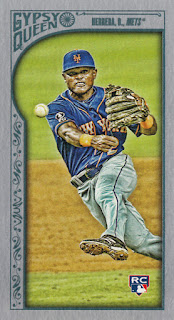 A super-cool silver mini of Dilson Herrera.  It will be interesting to see where the young second baseman fits into the equation when Daniel Murphy returns from the DL this weekend.  I'm thinking Murph will play third while Herrera continues to man second.  But, Ruben Tejada is playing so well right now at third base, it'll be tough to sit him down, too. 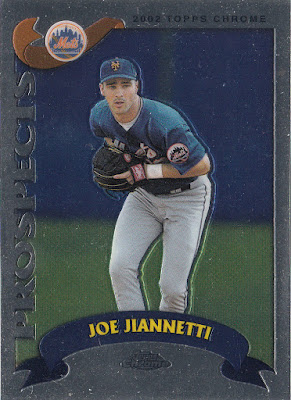 A former 40th-round pick out of St. Petersburg, Fla., Jiannetti kicked around the lower levels of the Mets farm system through the 2004 season before hopping around the various independent leagues for the next six years. It's probably a good thing that Topps stopped putting "Prospects" cards in their regular sets.  That's what Bowman is for!

And we wrap up the first PWE with another card for my ever-expanding Gabriel collection... 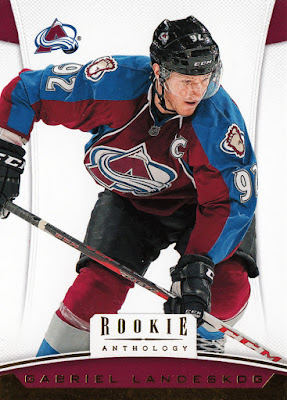 The Avs captain collected 59 points (23 goals) this past season, which was down a tad from the season prior. He's still one of the better young players in the NHL and, besides, he's still just 22!

Okay, time to move onto the follow-up PWE which came like, three hours after this first one.  Okay, maybe not that soon, but it sure came pretty quickly thereafter!

We lead off the second envelope with not one... 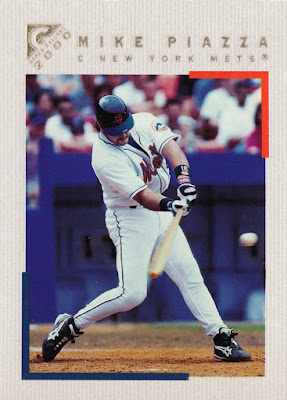 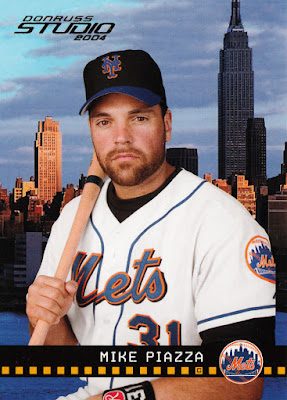 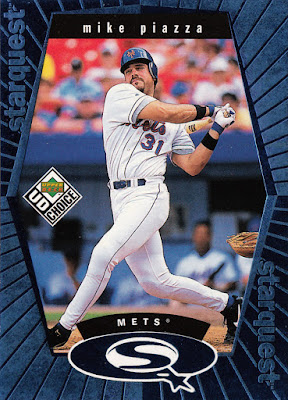 Next up, a trio of Chrome prospects from this year's Bowman... 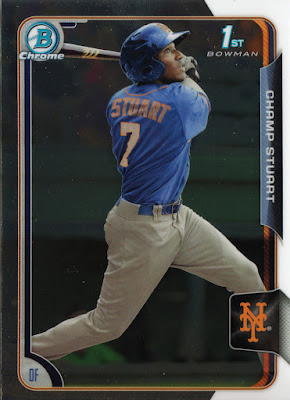 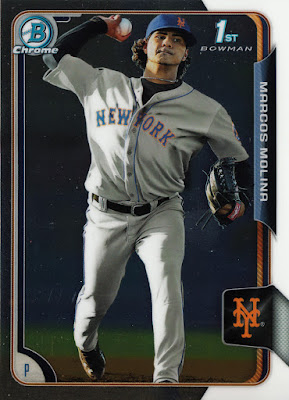 Marcos Molina, one of Stuart's teammates for the St. Lucie Mets, has a 1-4 ledger with an ERA of 4.41 in six starts this season.  However--and this is a BIG however--Molina was recently shut down due to elbow discomfort.  And the dreaded TJ surgery could be looming.  Hey, if you're a Mets pitcher with any worth, you're gonna have TJS eventually anyways, so might as well get it in your rearview mirror ASAP. 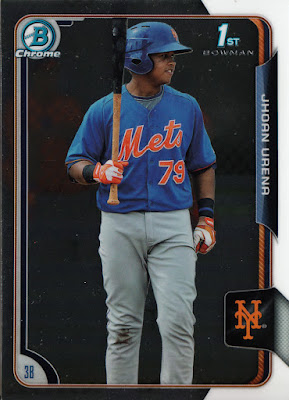 Then there's Jhoan Urena, whose first name is an anagram for 'Johan,' which is probably how you pronounce the kid's name anyhow, so whatever.  He's also at St. Lucie and is batting .229 with six extra-base hits in 40 games.  According to MiLB.com, he's on the DL.

Wow, what a droopy crop of 'prospects' that Bowman has hit on.  Good thing I'm not wearing shoes with laces!

Okay, enough of the depressing stuff.  Time for a bit of sunshine also known as Vlad... 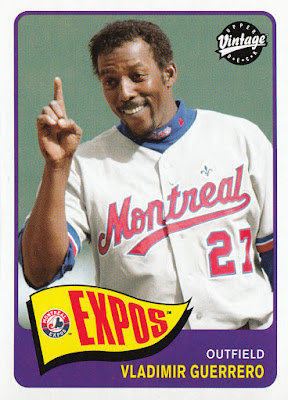 Hell yes, that's what I'm talking about!  Love the UD Vintage cards, even if they are rip-jobs of the old school Topps cards.  An all-time great photo of Vlad here, by the way. 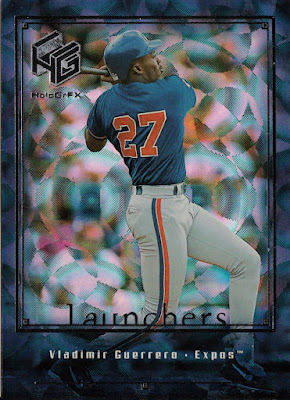 A super-duper hologram-y, hypnotic card of the future HOFer. 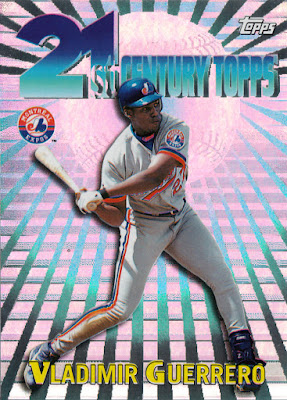 And then this one, in which it appears Guerrero has accessed the interface of the Houston Astros computer database and...  Oh, never mind.  It's a pretty great card, nonetheless.

Shane, you have been a machine with these PWEs, my friend.  I'm loving it, of course!  But don't overexert yourself.  If there's a form of Tommy John surgery for trading card enthusiasts, I don't want you to subject yourself to it!!