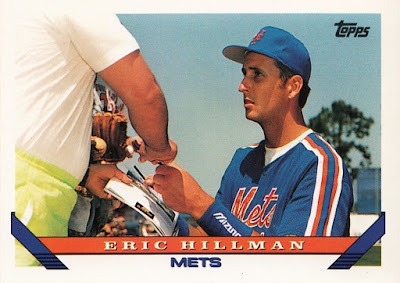 My seventh Zistle trade is in the books.  This one was a mostly junk wax transaction, but a necessary acquisition nonetheless.  My quest for many Mets cards knows no limits or biases.

I received 10 new cards total and sent off five duplicates, which is always a nice exchange rate.  Though, a couple of the cards received won't be added to my collection because, well, the gloss on the front photo had flaked off pretty noticeably leaving in its wake white specks.  For anyone who's recently cracked open a pack of high-gloss cards from that era (like Ultra or Leaf, for instance), you know how the cards have a tendency to stick together pretty good and require a good tug to peel 'em apart.  That's what it looks like in this case.  Two of cards--from '94 Topps--were plagued by this problem, while a third had a pretty good dent in the corner (also from '94 Topps).

I am being too picky by filtering these out?  Maybe, but I didn't hold it against the guy I traded with since the rest of the cards (the more important ones, in my estimation) were in fine shape.  I still gave him a 10.0 on the trade.  After all, some collectors aren't big on condition of 20 year old cards and, unless we had dialogue about it prior to the exchange, I can't hold it against him/her.

Hey, there are probably a million copies of a Ryan Thompson's 1994 Topps base card in existence; I think I can patiently await one that's in more suitable condition for my tastes!

Anyhow, onto the cards that made the cut.  Leading things off is Eric Hillman's '93 Topps card. It's one of six Mets cards I was lacking from the '93 Topps set, and it's a pretty good one.  I always enjoy a good horizontal card, as you know.  I could, however, do without the gut of the dude in the neon green shorts being in the frame.  It's a trade-off I guess. 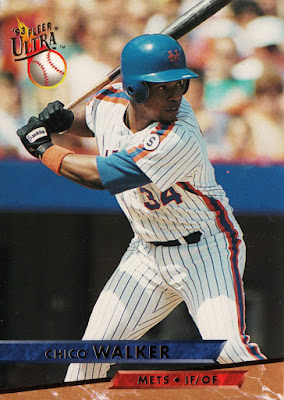 Just four Mets cards from '93 Ultra elude me still as a result of securing this Chico Walker.  That's neither extraordinary or noteworthy information, but I'm trying to fill some space here. 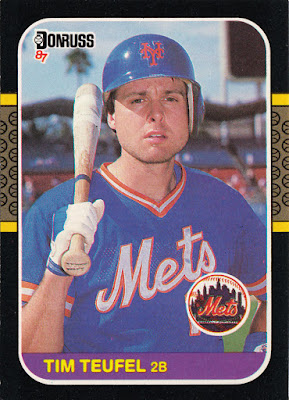 I don't mind getting older (read: pre-1988) Donruss cards in any sort of trade or repack situation.  While '88 through '92 Donruss seem to haunt us in our dreams, the earlier issues are a tad more scarce.  And this '87 Timmy Teufel is in pretty nice shape given its age and the fact that it has black borders.

Now onto my two favorites from the trade... 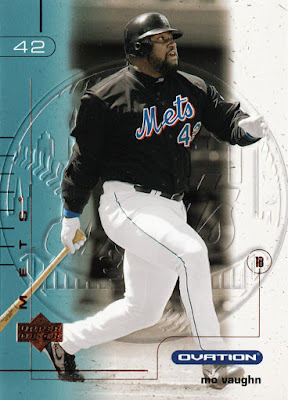 Any card of Mo Vaughn in a Mets uniform is a prized discovery.  Though he wasn't exactly a difference maker in his short time with the Amazins, the big guy is nonetheless a great piece of their colorful history.

He also hit one of the longest home runs I'd ever seen at ol' Shea.


Without shame or reservation, I will continue to cherish any Mo Vaughn cards that come my way.

Finally, the top dog from this recent trade... 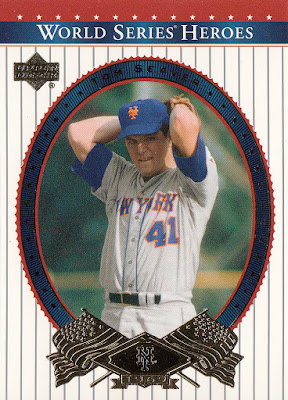 'Hero' seems to be a throw-away word these days.  Oh, you know, kinda like, "Bruce Caitlyn Jenner is a hero!" And we'll just leave it at that.

Not pictured here are a 1990 Topps Jeff Musselman and a '90 Donruss Terry Bross card.  They also came in the trade, but I felt that you could survive without their accompanying images.

All in a all, a trade that satisfied the itch just enough.  Hey, anything that nets me a new Seaver is worthy enough for posting!