From the Ocean State 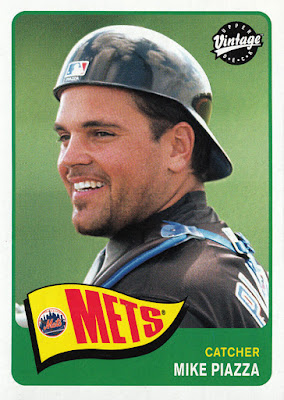 It's that time again: Time to tip my cap to my friend from Rhode Island for another world-class PWE delivery!

The medley of cards that Shane (of Shoebox Legends fame) recently put together was, as usual, second-to-none.  Some old, some new.  Some common, some rare.  And even a little bit o' hockey, which we here in the Clubhouse always appreciate, especially at this time of the year when the playoffs are in full gear.

For starters, a great up close and personal photo of Hall of Famer Mike Piazza from one of my favorite UD products: Upper Deck Vintage.  Cos, even when they're essentially rip-offs from another major brand, nothing beats little wavy pennants on cards. 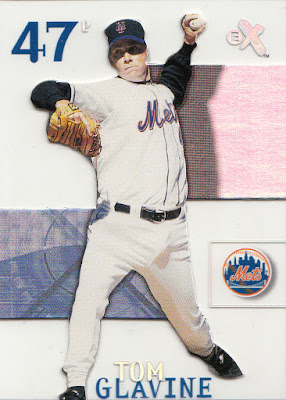 Another Hall of Famer on another now-defunct company from the early '00s.  Here we've got Tom Glavine on a 2003 E-X card.  It's clear, for which you'll have to take my word.  I know Shane is a sucker for cards of this sort, and I must admit I share his enthusiasm for them, too. 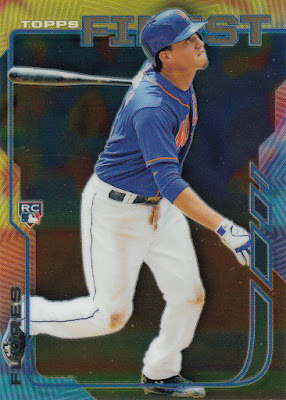 This one is satisfying on several fronts.  For starters, it's as rookie of fan favorite, Wilmer Flores.  A nice one, at that.  More importantly, however, this card completes the Mets team set from 2014 Finest.  Sure, it's only a four-card team set, but it's still an accomplishment, right?  Right! 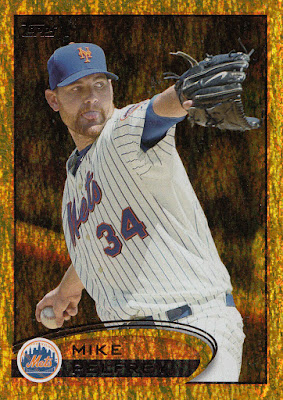 Are you old enough to remember when Topps cards had borders?  And when they came in various parallel forms that were easily recognizable, such as blue, red, purple and gold?  Those were indeed simpler times.  From 2012, a goldy, sparkly card of Big Pelf, aka Mike Pelfrey. 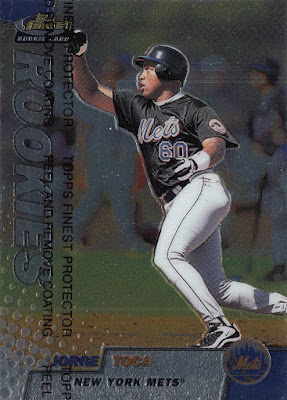 Jorge Toca's last name lent itself to plenty of plays on words and puns and such.  It's a shame he never made the transition from a Triple-A sensation to a big league superstar.  Cos we coulda had quite a few "Toca Parties" at the ol' ball yard in Queens, no? 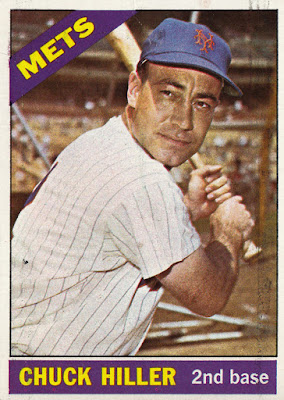 An oldie and most certainly a goodie!  It's '66 Topps and it's in fantastic shape!  How about a "Did You Know" for Chuck Hiller.  Ready?  Hiller, as a member of the Giants, swatted the NL's first grand slam in a World Series. He pulled off the feat in Game Four of the '62 Series versus the Yanks.  The Bombers won the series in seven, in case you were wondering. 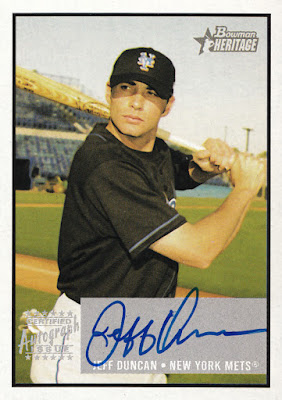 A beautiful rookie auto from 2003 Bowman Heritage of former prospect Jeff Duncan.  These "Signs of Greatness" autos are among the nicest and cleanest of the time period. 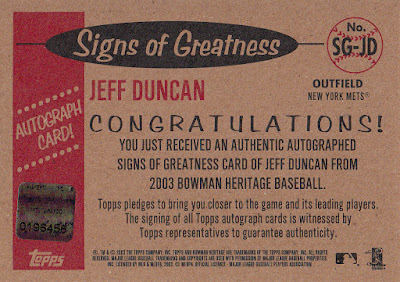 Duncan participated in 69 games over two seasons as a big leaguer--all with the Mets.  A cup of coffee, more or less.  That doesn't come close to lessening the enjoyment of this card, however.  In fact, I'm crazy enough to like random autos like this more so than the big names. 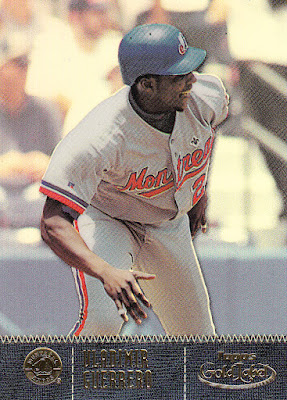 Shane continues to be a steady source of new Vladimir Guerrero cards for my collection.  This one brings my Vlad total to 390!  Topps Gold Label, by the way, was a terrific brand.  I like the spiral notebook effect they worked into the 2001 edition. 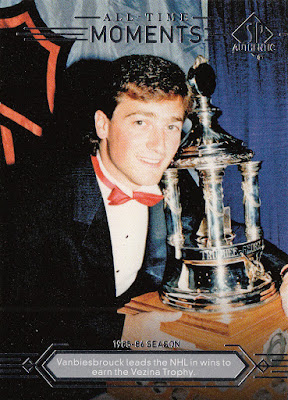 And we conclude with card featuring a hockey mullet that would make any red-blooded Canadian proud!  John Vanbiesbrouck had a long and very successful career between the pipes. winning 200 games over 11 NHL seasons.  His lone Vezina trophy came during the '85-'86 season as a Ranger.  I was only five at the time, so I can't say that I remember it.  Nonetheless, I'll always love the Beezer as he was the NYR goalie when I first fell in love with the team.

Another extraordinary submission in our long-running PWE exchange, Shane!  It's always a fun and exciting occasion to get correspondence from the Ocean State!