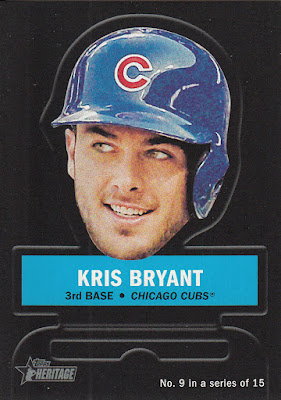 Last week I bought a hanger box of Heritage from Target.  You know, that cardboard thing that houses a cellophane-wrapped brick of 35 or so cards?  Well one of the cards I yanked out of the pack was this Stand-Up insert of Kris Bryant.  Pretty cool, and a pretty good pull, I must say.

I apparently had some Bryant mojo going on that day because I also bought a hanger pack of 2016 Opening Day and pulled the youngster's base card. 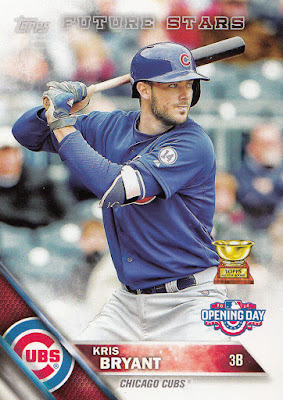 Between the Opening Day logo and the Rookie Cup and the "Future Stars," this is a pretty busy card.  I'm of the mind that you should either be an All-Star Rookie or a Future Star.  Never both.  That's just me.

Don't get the wrong idea.  I'm not going soft on the Cubs or anything like that.  It's just that I can appreciate cards of a young superstar, regardless of what team he suits up for.