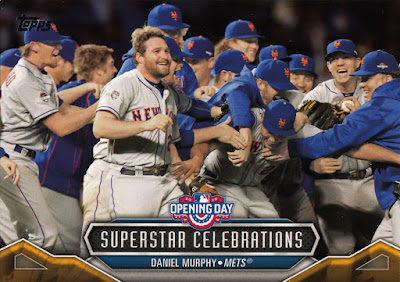 After watching the Mets lose two of three to the baseball version of the Keystone Kops, it's nice to have baseball cards to look at and remind me of the good times.  Y'know, like last year when the Mets won the pennant for the first time in 15 years.

The perfect card for bringing back the warm 'n fuzzies is pictured above.  From this year's Opening Day product, a "Superstar Celebrations" insert featuring the Bambino of the '15 postseason, Daniel Murphy.  Murph is no longer a Met, but he'll always be in the hearts of NY fans for his home run heroics that propelled the Amazins to the Fall Classic.

This card and all the cards in this post were generously bestowed upon me recently by my bud and yours, Nick of Dime Boxes.  As usual, Nick was able to amass a nice cache of cards that perfectly suited my tastes, mostly centered around my Mets collecting habit. 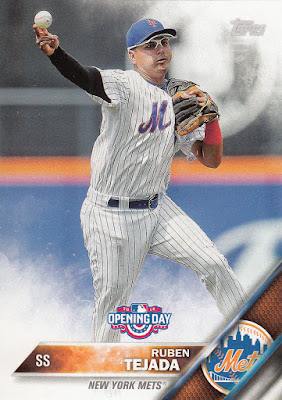 Ruben is also gone from Queens, but you can't blame Topps for including him in this year's Opening Day checklist as a Met.  Tejada was released at the tail-end of the spring training before latching on with the Cards. 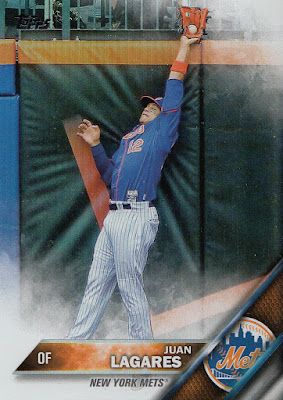 You'll have to take my word that this card of Juan Lagares is a foil parallel.  Great action shot of the former Gold Glove center-fielder robbing a would-be homer. 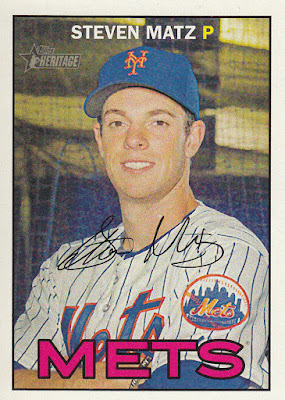 Short prints aside, I've now compiled all the base Mets from '16 Heritage.  Matz was included in last year's High Numbers set, so this isn't technically his rookie.  I'm still steamed that Topps dropped the ball and didn't include a true rookie of the young southpaw in last year's Topps Update.  Instead, we only got a "Rookie Debut" subset card, which doesn't count.  Despite several tweets, I've gotten bubkus from Topps in the way of an explanation of this. 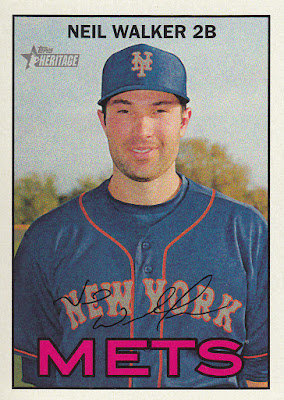 Here's Neil Walker's first card as a Met.  Digitally enhanced, I'm sure, but a pretty clean job of it. 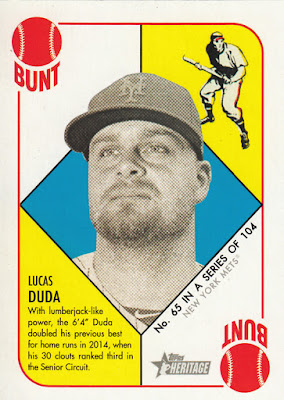 Now, this was a brilliant surprise.  This is a card from last year's Topps Heritage '51 set, which was released in box format on the Topps website only.  I initially thought these were going to be 'mini' cards, but they are not. They're normal baseball card size and printed on very sturdy Heritage-like card stock. 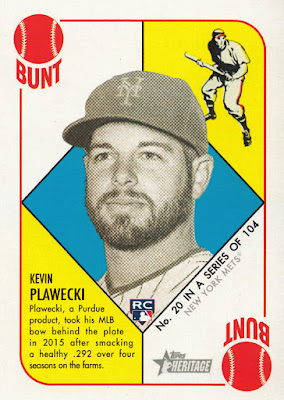 I was pretty excited to find these in Nick's PWE, and I very much would like to track down the rest of the Mets in this set. 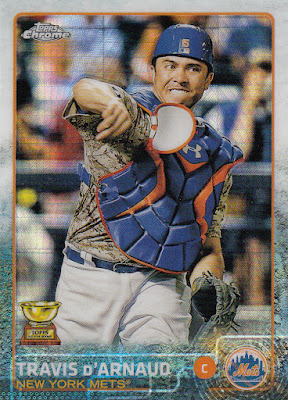 An awesome refractor of Travis d'Arnaud from 2015 Topps Chrome.  This one is classified as as "prism refractor" I believe.  It seems like every year there is a new kind of refractor that is born.  Tough to keep track of! 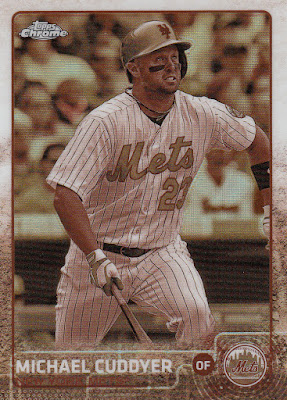 This one was easy enough to decode: it's a sepia refractor.  It's the first of its kind in my Mets collection.  Pretty cool dime-box find for sure! 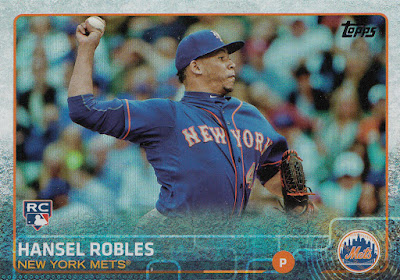 He of the quick pitch, Hansel Robles is featured here on a rainbow foil parallel from last year's Update. 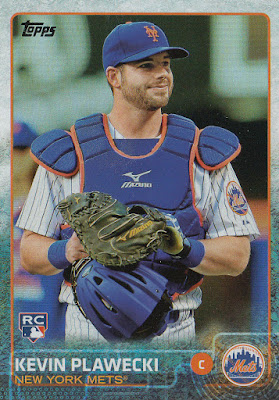 So is backup catcher Kevin Plawecki.  This is one of my favorite Mets cards from '15 Update.  I just like the simplicity of the photo. 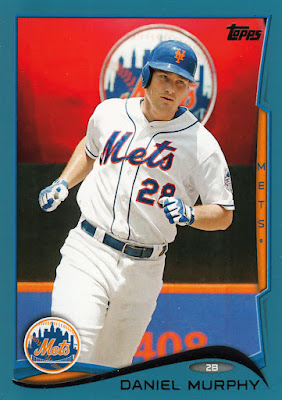 Going back a couple seasons, Daniel Murphy gets the Walmart blue treatment on this 2014 Topps parallel.  One of the best photograph backdrops you're gonna find on any baseball card.  At least one snapped at Citi Field. #HomeRunApple 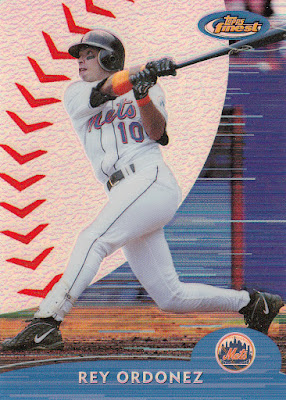 This is a 2000 Finest refractor of former defensive wizard Rey Ordonez.  Sometimes it's tough to tell when cards are refractors or not, especially in a brand like Finest.  Sometimes it's indicated on the back of the card, but sometimes it isn't.  Sharp card. 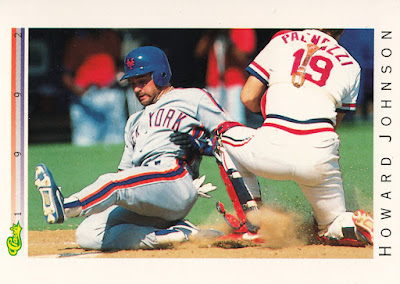 Awesomeness right here.  A sliding horizontal HoJo card from 1992 Classic.  My first from this set and one that I've had on my want list for some time. 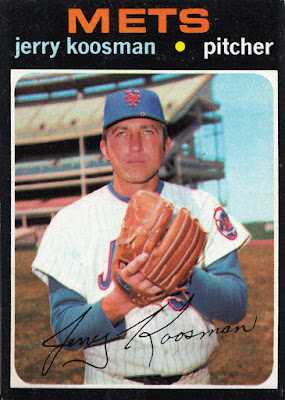 This isn't a Card Your Mom Threw Out or any of the overly-repetitive reprints trotted out by Topps these days.  This is a real deal vintage '71 of the Kooz.  Card is in fantastic shape!  Tough to do for this set, as many of you are aware. 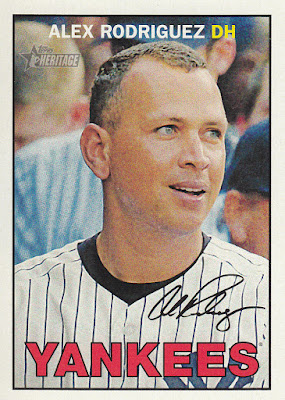 We finish with the only non-Met of the bunch.  But, it's a special one!  A short print of A-Rod from this year's Heritage!  SPs are always a rare and precious commodity, especially when it comes to Heritage.  They are also the thing that makes building a Heritage set a near impossibility for the average collector with a modest budget.  Anyhow, for all those reasons and more, this is a terrific get.

Thanks a million for another awesome delivery, Nick!  Even on a Casey-strikes-out kind of day, cards like these are just the tonic!