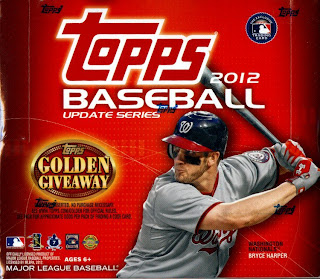 This is a "first world problem" post, so I'm just warning you in advance.

But, I recently came to a crossroads in my collecting ideology, and am conflicted about how to carry on.

See, I have a bit of a confession to make.  Prior to this year, I have never completed a set of cards by simply buying packs and nabbing individual cards at trade shows.  Mostly all of my completed Topps sets are either the result of getting factory sets as gifts or buying hand-collated sets from eBay or shows (1989 and 1987 are the exceptions).

However, I made the decision this past year to do it the old fashioned (read: FUN!) way and piece the set together like, you know, a collector would.  I mostly made this decision because I wanted to try and get some of the neat inserts and parallels, plus I really liked the 2012 Topps products and wanted to "experience" the cards. The flagship, Archives and Heritage all struck my fancy, so I decided to go all in.

Plus, you know, I found this blogging thing and got swept up in the euphoria of that.

I've always been a player collector type of guy throughout my collecting days, and not much on the side of set collecting.  So, this is whole process is new to me.  Replete with all sorts of new joys and frustrations.  But aren't those the things that keep us coming back for more?

Besides, what joy is there in getting cards that someone else has already discovered and collated.  The thrill of the hunt and, of course, ripping open the packs to savor your new treasure is what makes us who we are. You can't put a price tag on some experiences, can you?

Well, for Topps Series 1 and Series 2, I bought blasters and hanger boxes and rack packs (oh my!) to put the sets together.  (Of course trading with fellow bloggers has been huge, also!)  I've completed the Series 1 set, and am closing in on Series 2.  And you know what?  I had a really fun time doing it!  Well...duh, right?!

And with Update coming out, I couldn't wait to run down to Wal-Mart after work earlier this week and get my usual array of "release day" purchases: one blaster, one hanger and two rack packs. 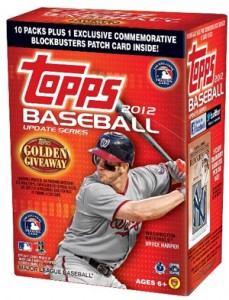 I was semi-shocked to see the blaster box had been shrunken by the best brains at tops.  Less waste, I guess. Same number of cards/packs, so who cares really.

Anyways, I was thrilled to see the bright, juicy red boxes and packs of Update with Bryce Harper gracing them. All ripe and sitting there on the shelves, waiting for me to pluck them and take them home with me.

But what began as a slam dunk visit to Sam Walton's joint pivoted into an afternoon of hobby tumult.  You see, I didn't pull the trigger.  I left Wal-Mart with my tail between my legs and pouty-puss on my face.

See, the past couple years I've gotten used to buying the 330-card Update base set off eBay for about $20 (plus or minus a few shells depending how good a shopper I am).

Heck, I even had the damn blaster in my hands and did a lap around Wal-Mart while I had a conversation with myself in my head.  I went something like this:

Annoying Inner Me:  Don't be a dope.  You can get the whole '87 mini set off eBay for another 20 bucks.  I assume you're going to buy another blaster at some point, correct?  Well there you go.  And with your luck, the patch cards will probably be John Smiley or Pat Tabler anyhow.

Couldn't argue with any of that.  The blaster went back on the shelf and I shuffled out of the store before I started to attract any crooked glances for circling the Maternity Clothing section with a box of baseball cards in tow.

As if that weren't bad enough, I stopped at my local card shop before I headed home because I had to pick up some binder sheets. And, once inside, of course my eyes were drawn towards the glass counter where 2012 Update hobby boxes were sunning themselves in the artificial light.

I can tell you I was this close to picking one up and plopping it down at the register along with my credit card. I've never purchased a hobby box before and for about 60 bucks I could've taken this one home and started working on my 2012 Update set.  What fun!!  Sure, the blaster and it's little brothers didn't make math and/or money sense, but this was a hobby box.  After all, I was guaranteed an auto or relic within!  Plus everyone knows you get better stuff in hobby boxes than retail (right?).

Well, I left the shop with a box of binder sheets and nothing more.  I fought the notion off once again, thanks to some simple, aggravating economics.

Annoying Inner Me:  Hello?  Anyone paying attention out there?  For 60 bucks, you can buy a complete Update base set, a complete 1987 mini set, and have money left over to buy another insert set of you choice.

So I sit here at my keyboard with a cloud of frustration shrouding my card-collecting soul.  I guess I start thinking about how much I spent on all the boxes and packs of Topps flagship this past year and the monetary total far exceeds the cost for a factory set.  And that makes me gulp very hard.  Not exactly like I have a lot of dough to blow or anything.  But at the same time I want to enjoy the experience rather than just go through the motions.

Does this make me a bad collector?  Or a curmudgeon?  Or a cheapskate?  Am I missing the forest for the trees?  Am I sapping the fun out of the hobby by over-thinking all of this?

In other words, who am I as a collector?

Like I said, very much a first world problem.  But I wonder if anyone else out there has the same internal issues.

I still don't know what I'm going to do.  The allure of going after Update via packs is still very strong.  But my frugal side won't let me take the plunge -- yet.

At least Me and Annoying Inner Me agree on one thing.  Sandwiches.