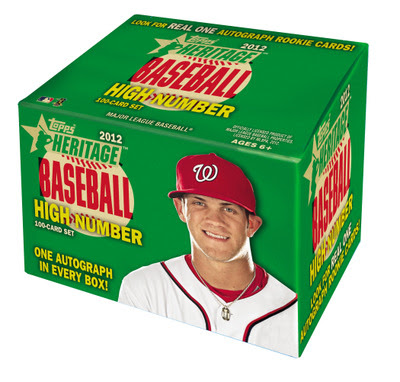 Yes, I pre-ordered the damn cube of cards that you see above.  It goes against many of my principles in regards to frugality and common decency.  But I did it.

And, if I'm being honest, I think I'd do it again.

I know there's a lot of outrage within the collecting community about the recent release of the 2012 Topps Heritage High Number set -- a ShopTopps.com exclusive.  And justifiably so.  It's outrageously priced and smacks of shameless gimmickry.

Most of you probably already saw/read it, but in case you haven't, Night Owl wrote a very passionate column about Topps' abuse of the common collector and, most notably, the set builders out there.  To say that Topps is turning their backs on us with many of their present-day shenanigans in an understatement.

So why the hell did you buy this box then, Mark?

Because I'm a hopeless addict, I suppose.  But, that's a rather watery gruel of an excuse, isn't it?  Countless times previous I've turned up my nose at over-priced boxes and exclusive gimmick sets, etc.  Why, just this past summer, I refused to buy any of the "online exclusive" Topps mini cards.

So what makes this new ploy any different?

Sorry to disappoint, but I really don't have a concrete or satisfactory answer.  I've written numerous times on this blog about my new fixation with Topps Heritage.  And the excitement I've derived from working on the 2011 and 2012 sets this past summer.  I really can't tell you the last time I enjoyed collecting a set as much as I've enjoyed my Heritage chase.  So, there's that.

The thrill of getting the first Heritage card of Bryce Harper or Ichiro in Yankees garb?  Sure, that's very enticing, though I find it repulsive that Topps keeps taking us hostage with these short-print rookie card releases.  While it adds an element of excitement to the pursuit, knowing that I'll never have a legit chance of getting a Harper rookie in Topps flagship or Heritage without breaking the bank is a nauseating thought.

The autograph card?  Not really my thing.  I like auto and relic cards, don't get me wrong.  But they don't rotate the earth.  And, as I've said before, my luck with autos and "hits" is such that I fully expect the autograph in my box to be of Barry Lyons.  [Ed. Note: Yes, I'm aware that Barry Lyons won't be featured in this set.  Hyperbole, y'all.]

But, yet here I am.  Writing about a 100-card set that Topps is dangling before us like a captor taunting his prisoner with the key to his cell.  And, yes, that was me this morning at 6:30 anxiously clicking towards the Topps online shop to register my pre-order for this thing.  After all, one should not hesitate since production is limited to 1,000 sets (or so states the website).

So without a pint of decent rationalization, I guess I'll wear the dunce cap and fully accept the terms of the traumatic bonding that I have forged with Topps, specifically their Heritage line.

I'd bother to draw a figurative line in the sand, but what's the use of further embarrassment?  I know I'll go running back when the 2013 Heritage blister packs and tote bags and fuchsia parallels arrive in a few months.

By the way, the 2012 High Numbers set is slated to ship the week of November 6.